Cool temps, clear blue skies, no clouds, little wind, and shady shooting positions without the sun in your eyes.  Ponderosa pines and scrub oak with dappled sunshine leaking through.  What more can you ask for?  This is why we shoot here in northern Arizona.  We had 19 shooters gather to give it their best under such trying conditions.

Steve set up 10 lanes with 2 targets per lane in a predominantly north to northeast facing direction along with the help of Kent, Robin, Bobby, Sandy, and a few others that I was not fast enough to catch their names.  Regardless, thank you all for setting up a very nice, albeit challenging course of fire.  Troyer number for this match is 31.37, however Steve has a penchant for giving you a few gimme’s, and also some small KZ’s at extended distances.  The wind DID play a part in some of this but behaved itself to the point where you didn’t notice when it snuck in.  It did that periodically, mostly when you were not paying attention.  GOTCHA!

We had four classes contested today; 4 shooters in Open PCP, 2 in WFTF, 7 in Hunter PCP, and 6 in Freestyle.

The top scores came in Open PCP with Cole scoring a perfect 40/40 with his young son, Colben acting as scorekeeper!  GREAT SHOOTING!  Sandy took second with a not-too-shabby 39, and Bobby and Mark tied with a 37/40 each.

In WFTF we were shorthanded this month with both Lauren and Bill just getting back from having shot in the WFTF world championships.  Regardless, Garrett took first with a 27/40 and Pat C took second with a 25/40 and still recuperating from back surgery.  Talk about being a glutton for punishment, but he does love to shoot and drives here from Las Vegas to do so!

Kent G took first in Hunter PCP with a 36/40, with the “old man”, Mike S, nipping at his heels with a 35/40 and Steve M right in the thick of things with a 34/40 to garner third place.The girls made their presence known in Freestyle class with Abigail shooting a 36 for first place and Crystal shooting a 35 for second place.  Randy took third with a 33/40.  Doc Shrader’s grandson, Max, shot for the first time ever with his grandpa coaching and finished with a 21/40!  Not too shabby for a beginner shooter.  Watch out for the girls as they are going to be a force to be reckoned with.

Nothing down here.  Go back up top.

After all the scores were turned in and collated and ready for awards, none of the troops were on hand to award anything to.  Everybody was sitting under the shade canopy at Steve’s camper chowing down on Kent’s BBQ beans from the night before.  He made enough to feed an Army and the troops were making short work of what was left over.  Needless to say, it was easier announcing awards with everyone’s mouth full and being an otherwise captive audience.  This was followed by a short club meeting and putting things into place for next month’s State Championships, which Airgunners of Arizona will once again host.

That will be the weekend of September 20, 21, and 22 and will also be an AAFTA Grand Prix.  We already have registrants from AZ, NV, CA, CO, OR, ME, MD, and NC.  Seems like people just like to come shoot with us!

Note also that there are no photos this month.  My long abused camera has finally given up the ghost, even after Mary Ann (club treasurer) walked the course and took action pics of each lane.  Not her fault, but something I have been putting off for a while.  A replacement has already been purchased, so we should be in good shape for the foreseeable future.  So my apologies for no visual proof of the above saga.  I can assure you it was a glorious day of shooting!  All attendees can attest to that as well.  We had a good time! 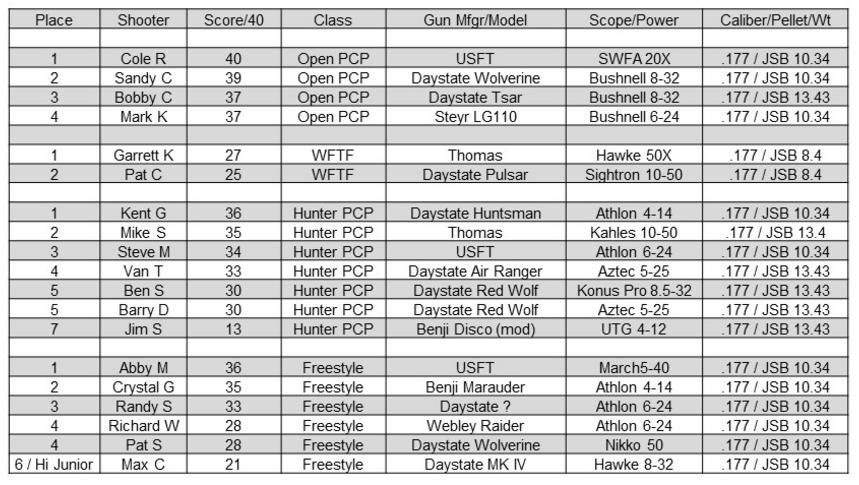