Looking over Waynes shoulder down range. 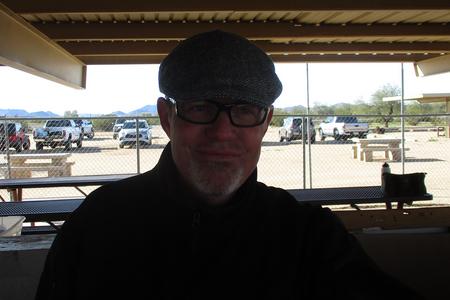 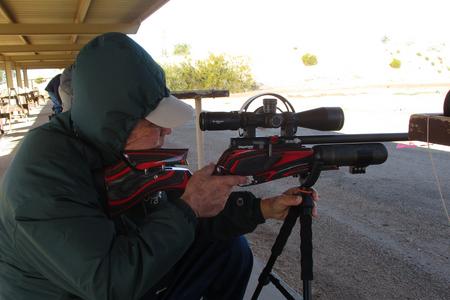 The guys trying to soak up some warmth from the sun before it is their turn to shoot. 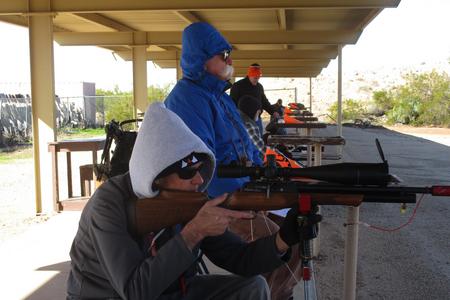 Peykan showing off his Thomas. 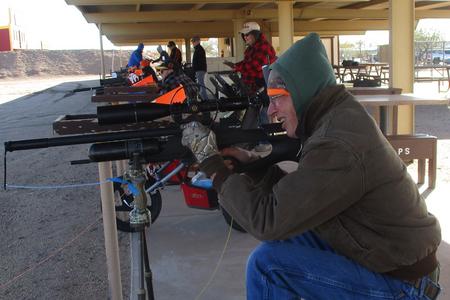 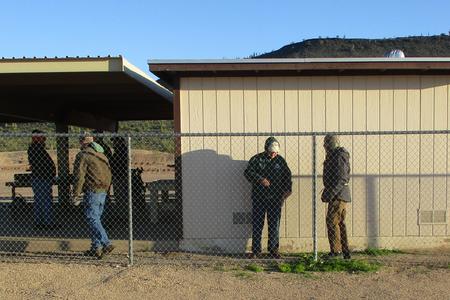 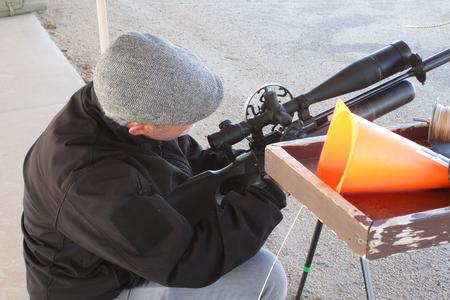 Happy New Year, and welcome to winter in the desert.  Most of the time, when the rest of the country is buried in snow, we usually have some pretty nice weather, but when there are competing storms raging elsewhere, we seem to get the peripheral effects.  Today it was the cold and windy.  The NWS forecast 5 – 10 mph winds out of the north.  My wife, listening to the local news and weather, as I was leaving the house this morning, said that we should have a nice day with no wind!  At that point, I knew we were in trouble…. 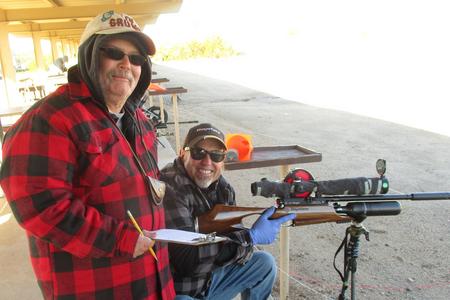 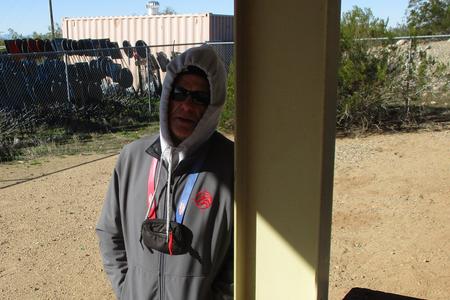 In addition to shooting some pretty decent scores, these guys have also gotten pretty good at setting up and tearing down the courses in record time.  Heck, we shoot our weekly TRAC matches year round, with the guys grabbing blocks, clamps, strings, and targets and placing them where they have to go without even asking.

They know, based on KZ sizes, where they need to be placed, and set them somewhere in that yardage range.  Any one of these guys could easily set up and run matches on their own.  We get lots of practice doing it, but we still want to thank them for their attention to detail and their willingness to jump right in and get things done.

They may look like a bunch of old curmudgeons, and some of them are (LOL), but we are all just a bunch of overgrown kids that love to shoot…. a LOT!  Every club should be so lucky.

P.S.  Thanks to Peykan for taking some of the pictures today.  MK

I am almost sure that this is Stephen all bundled up.

this is Ben with using his nose glasses technique for shooting. 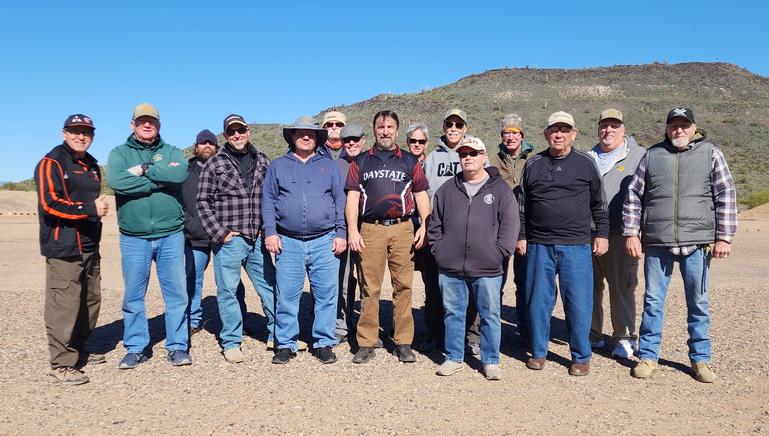 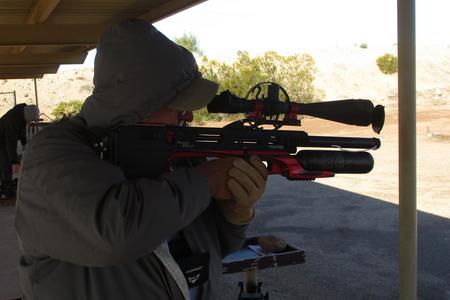 Todd on the line getting ready to shoot. 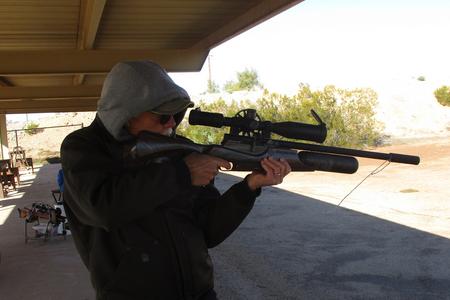 Peykan shooting with Mike pulling string to hold target up!! 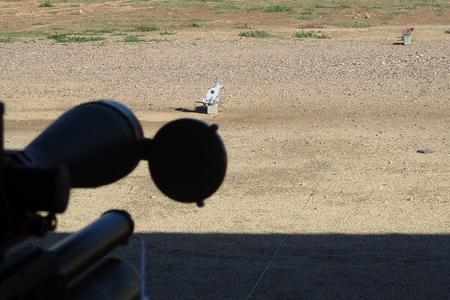 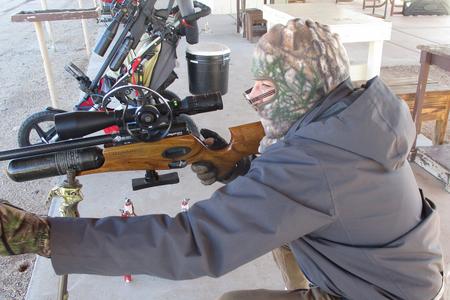 The windicator on one of the rifle barrels, whipping in the wind. 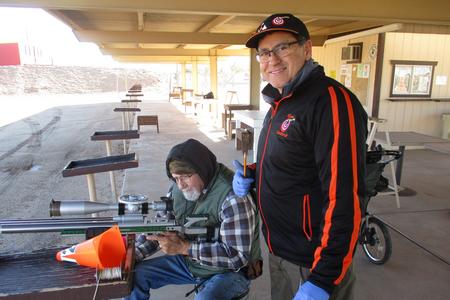 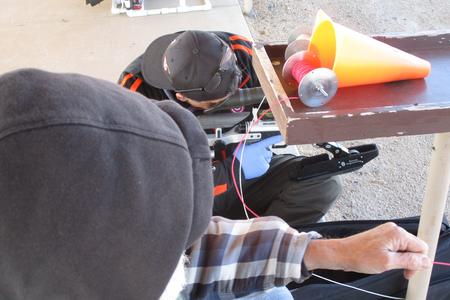 Wayne on the standing lane

Barry on the line shooting with Stephen scoring

Here is a view of the range.  It may not look like much, but it is a challenging little woolybugger to shoot with the wind swirling off the berms and the hillside beyond.  The wind comes over that little saddle to the right and creates all kinds of havoc. 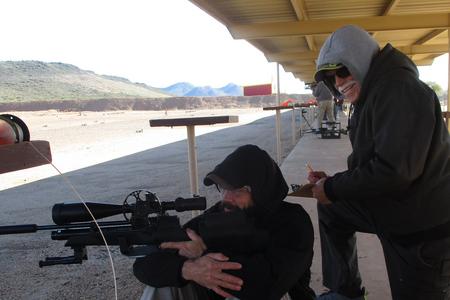 Stanley all bundled up

Ed on the standing lane 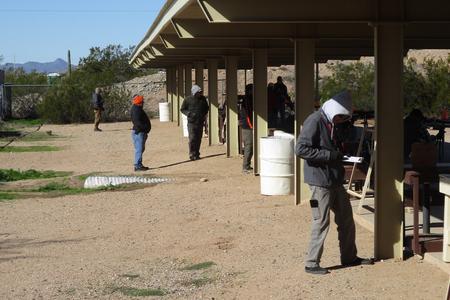 Here is the other Scott H. shooting 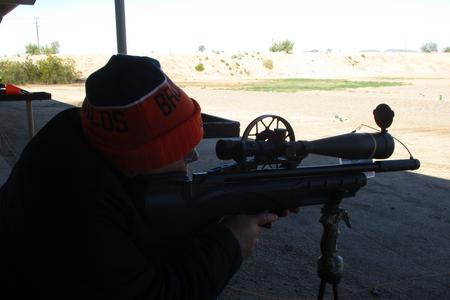 The weather today was nice…..looking.  Clear, sunny skies, but the temps started at 35° and only warmed to 53° by the end of the match.  Mother Nature chuckled as she said, “So, you guys want to shoot your BB guns today?  Ha ha ha ha ha ha !”  Because of the hillside behind the pistol silhouette range at Ben Avery Shooting Facility in Phoenix, we got winds swirling out of the north, northwest, northeast and fishtailing between each direction at a blustery 9 to 11 mph with sudden gusts to 16 mph that made the air feel much colder.

Needless to say, our fingers were numb.  Trying to pick up pellets resulted in nothing there, or multiples of them dropped onto the deck.  It was ch-ch-ch-chilly!  Don’t get me wrong, most of the time it is really nice in this part of the country at this time of year, but every now and again…….

We had 16 shooters present to do battle with the steel critters today, which we had set in 12 lanes / 2 targets per lane / 48 shot match.  We had 12 guys competing in hunter class PCP, where old man Mike led the field with 46/48, and 2 shooters in WFTF PCP with Peykan taking top honors there.  Only one shooter in each of open PCP and open piston, but we still had fun. 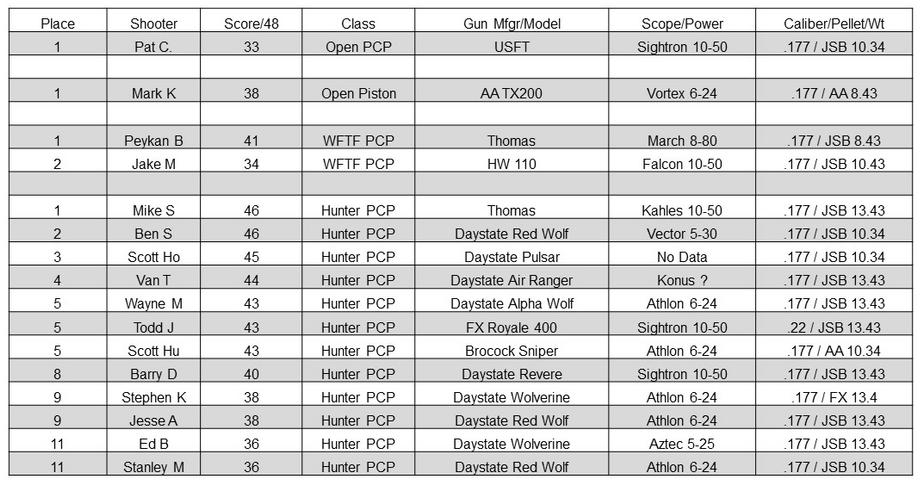 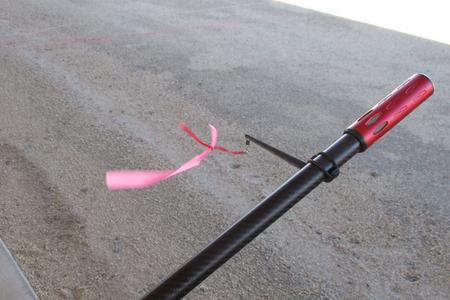 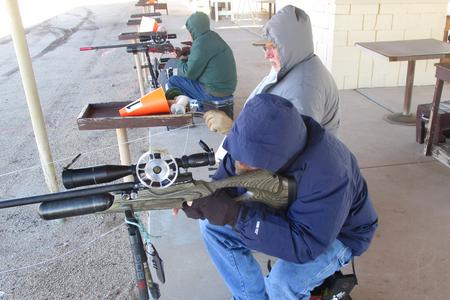 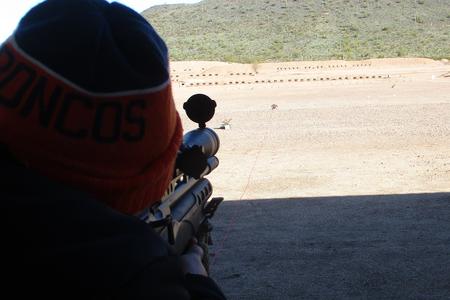 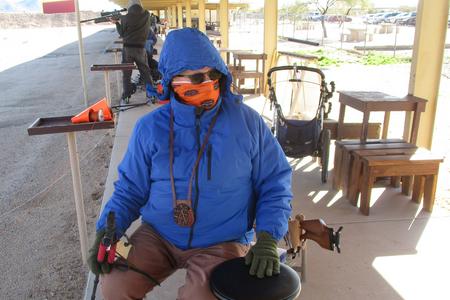 The guys typically hide behind the range building to get out of the wind and soak up some sunshine.

Looking downrange from behind Scott