Can you find the target?  It is the red dot in that tangle of tree trunk and branches and is located about 15 yards beyond that mess.  It is a 31 yard target with a 3/4" kill zone.  Fun! 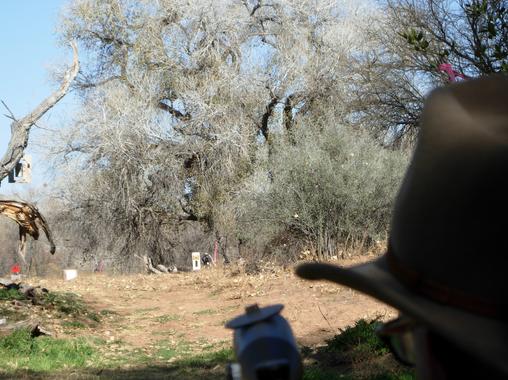 Oh, and the bonus lane?  A number of shooters gave that a try, some with good results and others not so good results.  Scott, the new guy, nailed it twice!  Bobby, the overall match winner, also nailed it twice.  With two other bell targets on the course, in addition to the bonus lane, it brings a smile to your face when you hear a “Tingggggg”, each with a different pitch resonating across the firing line.  You can tell when the troops are having fun. 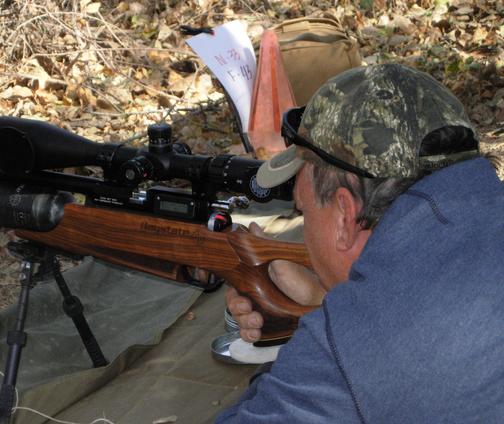 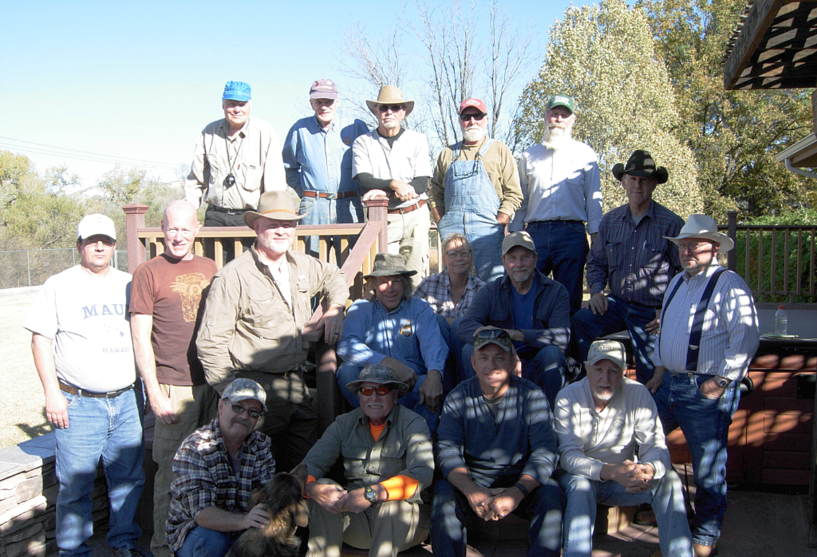 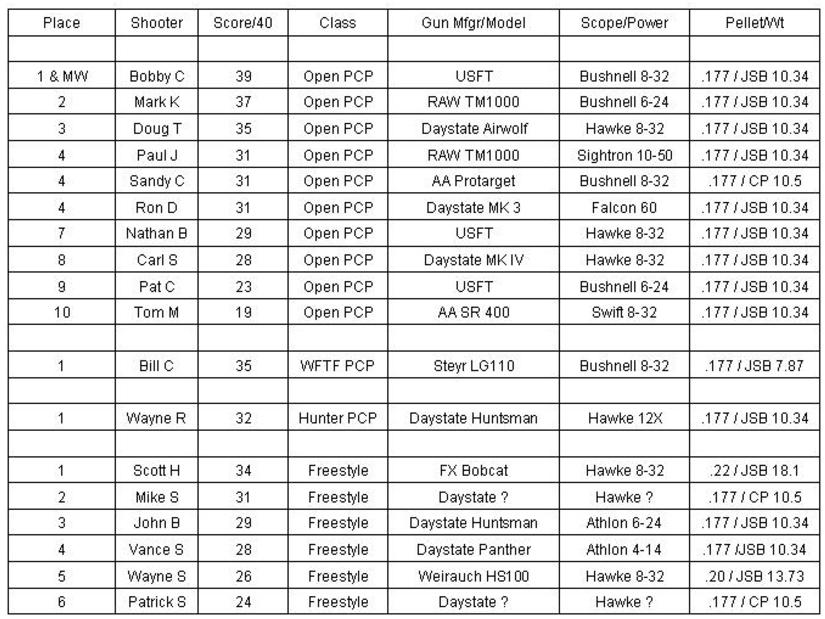 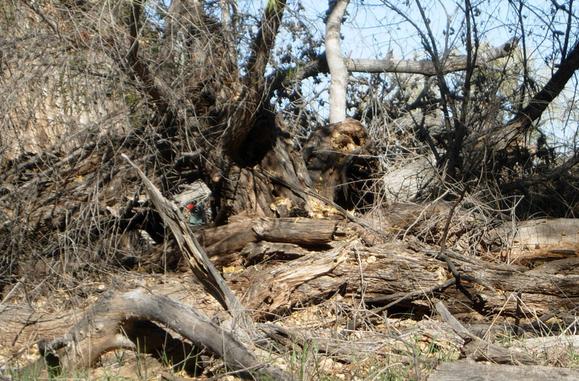 Bottom row L-R; Pat C, Paul, Patrick S, and Mike.  Missing from photo was Mark.  Someone had to take the picture! 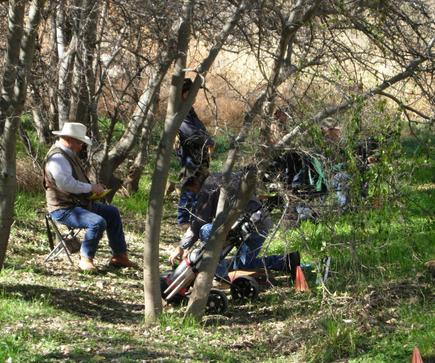 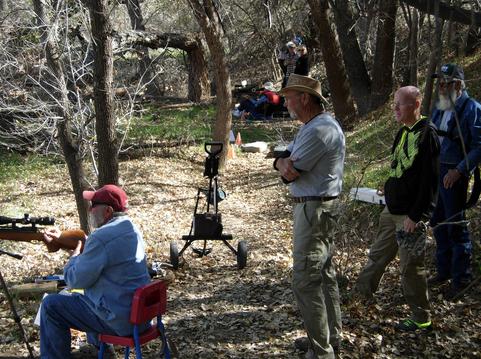 After finishing the match and scores were tallied, we handed out awards to the winners, took a group photo, and then got down to the serious business of chowing down.  When the match reminder was sent out, it was noted that we were going to have a pot luck lunch.  Chips and dips were set out to munch on as the scores were coming in, and I have to admit that the buffalo chicken wing dip was Outstanding!  Sandy made two pots of amazing chili, and the desserts were equally delightful.  One in particular, an Armenian Paklava (not baklava), using a super secret recipe (he’ll have to kill me if he tells me), was wonderful!  Thanks to all who contributed to this feast!

The usual Airgun related discussions ensued after this, along with some plinking, while a few of us, being too stuffed to move, sat and enjoyed the sunshine and the increasing “breeziness”.  We hadn’t much noticed the wind before, but it made itself known as the shooters filtered out to pack their vehicles and head for home.  It was a wonderful day!

In closing, we at Airgunners of Arizona want to wish everyone a Happy Thanksgiving.  It is always a good thing to reflect on what we really have to be thankful for.

Here is a roadrunner perched on top of a fallen tree with a lot of stuff in the foreground that needs to be shot through. 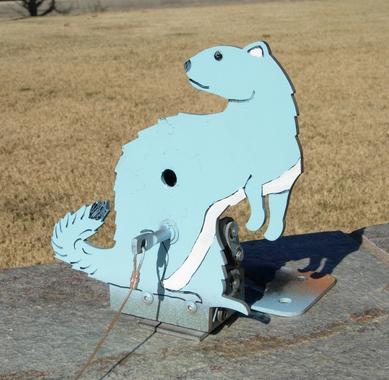 Patrick trying to find his target. 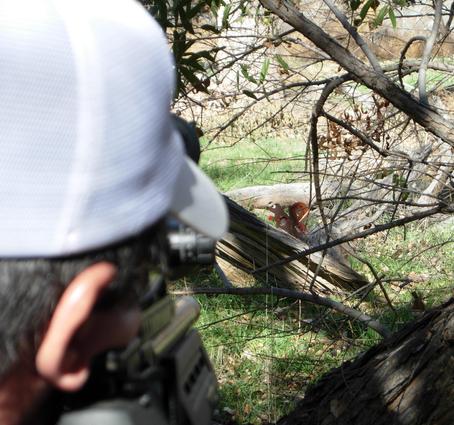 Here is something we are experimenting with; a light blue target with a black paddle.  It shows up very well at any distance and is easy to touch up

The previous Tuesday, I traveled north to help Bobby set up his 10 lane course through some pretty thick undergrowth.  He set two targets per lane and had an added optional bonus lane.  After the 40 shot match, each shooter had the option of adding two points to their score by hitting a bell target situated at 75 yards from the firing line.  Hit the target twice and add two points to your score.  Miss the target and DEDUCT one point per shot.  Devious fun!  He also posted the yardages at each lane marker to assist the new shooters that planned to attend.  The target positions were also cleverly located.  They were in the trees, behind fallen branches, on top of fallen tree trunks, underneath fallen branches, and way out in the open where the pellets could be affected by wind.  There was one target that could only be seen when in shooting position because of the tunnel of fallen branches and uprooted tree trunk that you needed to shoot through in order to hit the target 15 yards beyond.  One target out in the open could only be addressed by shooting through a tire hanging from a tree branch at the midway point.  As stated earlier, this was devious fun, and fun we had! 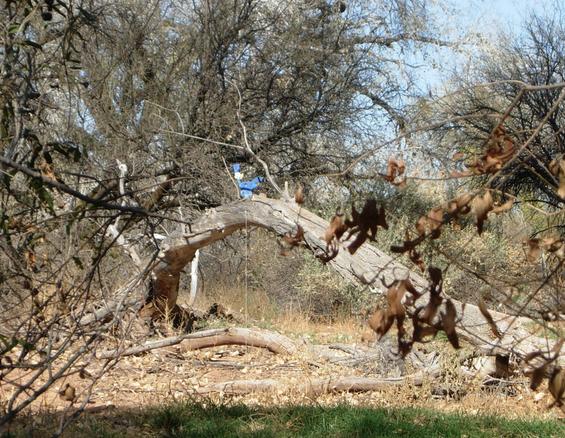 We had shooters competing in four classes; Open PCP, Hunter PCP, WFTF PCP, and Freestyle.  The three new shooters opted to shoot in Freestyle class until they learn the game.  It was a quick learning curve for two of them because they finished first and second in the class.  I paired up with Scott, who would go on to win the class.  He just wanted to come to the shoot, learn what field target was, and was not concerned if he won or not.  He is now more than ready to move over to open class for the next match.  He wants to bring his kids along, also.  A great way to introduce them to a lifetime sport  of fun and fellowship.

We had an absolutely perfect day to shoot field target.  The sky was clear and bright, the air was cool and the temperature would only rise into the upper 60’s and there was no wind to speak of.  We were nestled in a protective copse of trees just below the river bank where the waters of the Verde River, some 300 yards distant, would be held back during a flood.  The trees provided shade and the grass in this area was still green.  It was quiet, it was tranquil, it was seductively peaceful…..and it was being invaded by 18 air gunners having the time of their lives.  We were shooting at the home of Bobby and Sandy, who graciously offered their property for the November shoot.  It is a good half-way point between Phoenix and Flagstaff and an easy way to transition between our summer quarters at Mormon Lake and our winter home at Ben Avery range.  “Winter” in Arizona is a relative term for some of us desert dwellers.