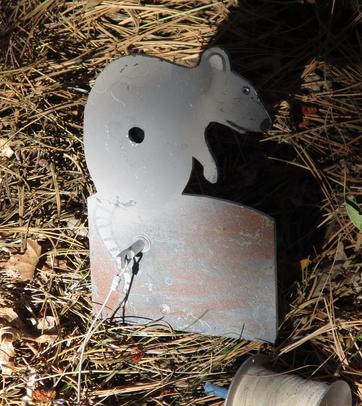 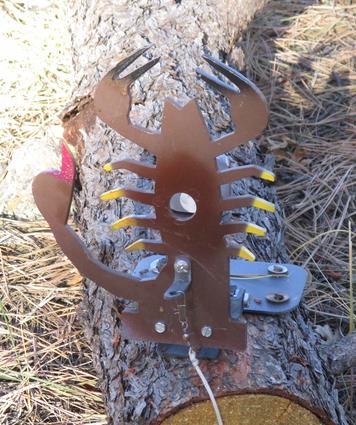 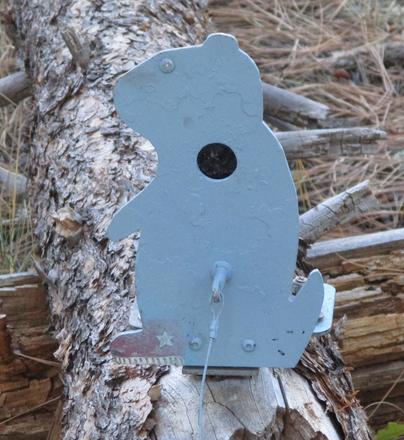 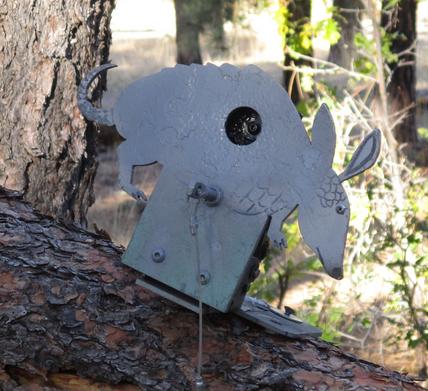 Steve joining the fray for the Founders Cup 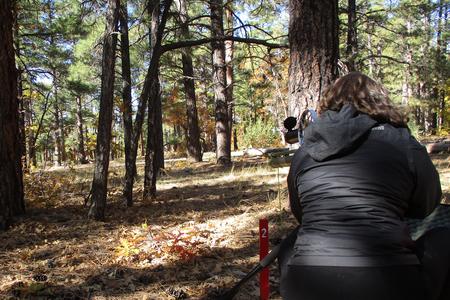 After turning in cards, there was only one positional tie between Cole and myself for 1 – 2 in Open PCP and a 3-way tie which included Steve, for the Founders Cup.  Cole and I squared off at a ¾” target at 25 yards while sitting.  Bang, Bang, we each nailed it.  On to kneeling.  I missed and he connected.  His eyes were as big as saucers and an ear-to-ear grin as he did a “drive-by”, according to him, and garnered him first place.

Next, the three of us, Steve, Cole and myself, lined up to shoot off for the Cup.  The same ¾” target at 25 yards.  Bang, Bang, Bang.  We each nailed it sitting.  Back to kneeling.  Steve and I missed, but Cole did the same thing as the first time, along with the same wide eyed, ear-to-ear grin.  He couldn’t believe he did it twice in a row.  He is a good kid, a good shooter, and deserves the accolades…..and his young son, Colben, was there to watch dad do it.  How cool is that?

Views of some of the critters 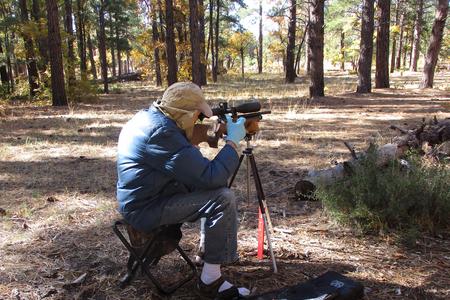 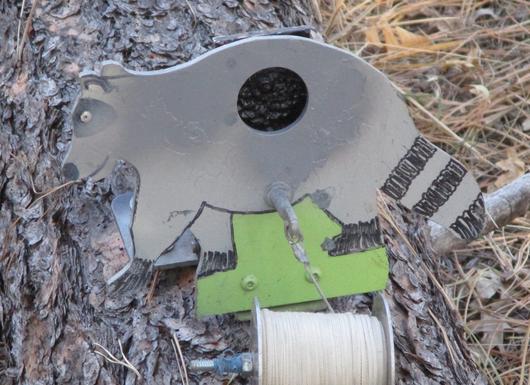 Lanes 1 thru 5 are on the right side and positioned going away from your point of view.  Lane 6 is at the corner facing on a SW diagonal.  Lane 7 is across on the opposite corner and facing SE.  Lanes 8 thru 12 are positioned coming at your point of view on the left side of the photo.  Compact, but not too tight.

We had 9 shooters competing in Open PCP class with Cole and yours truly tied for first with a 47/48.  One shooter, Bill C, who is still recovering from an auto accident while returning from nationals, was our only shooter in WFTF.  How he manages to even move, with the pain he is in, is beyond me, but he is a diehard shooter and loves to be around this crew. 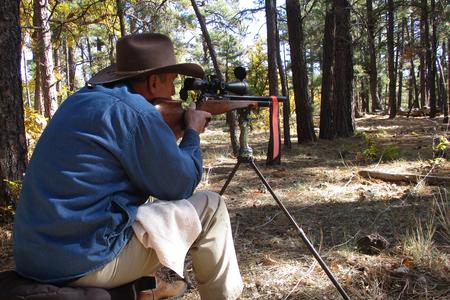 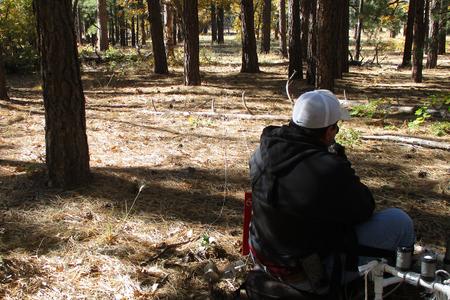 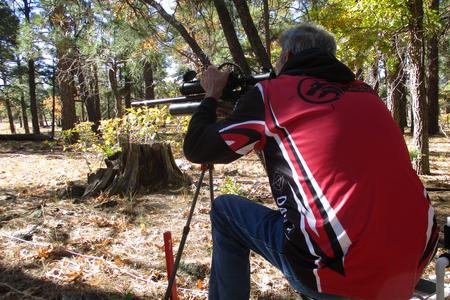 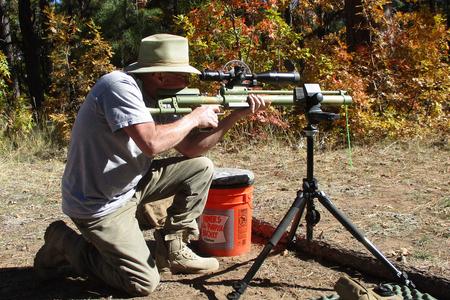 My view of the sunset while driving home on Saturday evening after the match. 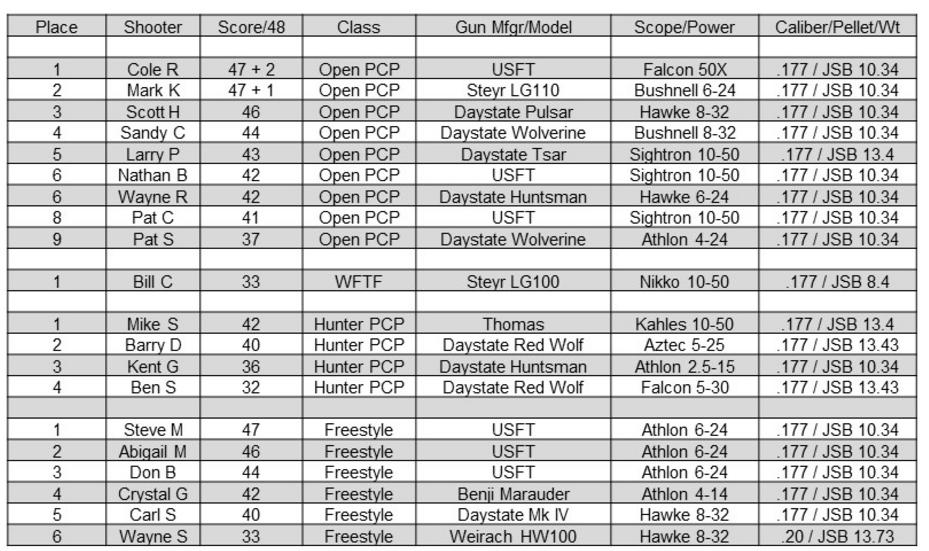 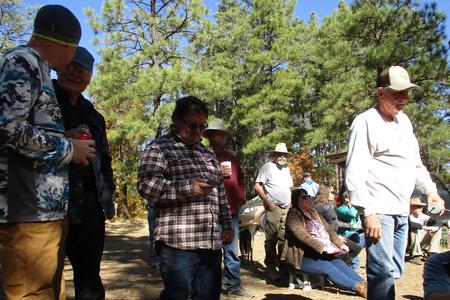 Robert Buchanan, one of the four founding fathers of Airgunners of Arizona, decided that he wanted to commemorate the anniversary date of the club each October, so he had the “Founders Cup Trophy”, a traveling trophy, commissioned and presented to the club back in October 2012.  Started in 1992, the club is now officially beginning its 28th year.

Upon arriving on site on Friday about noon, Steve was just getting there and hadn’t set his camper yet.  Don had been camping there for two days out of the back of his pickup, and Kent was roaming around looking for squirrels.  We unloaded the targets from Steve’s truck, grabbed the marker stakes and started to lay out the course. 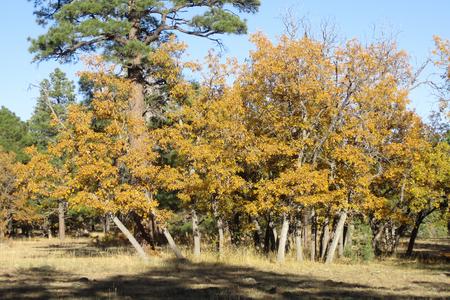 Some of the views we have; the majestic old skeleton that may not be standing much longer, the copse of color in the midst of the pines, and a startup little scrub oak on the forest floor

Four shooters in Hunter PCP, with the old man (Mike) shooting a 42/48 and finally 6 shooters in Freestyle.  Abby Montgomery scared the crap out of her dad by finishing with a 46/48 to his 47/48.  Don was hot on their heels shooting 44/48.  All three shared Steve’s gun because Abby’s was being worked on and Don’s appeared to have a seal failure just before the match. 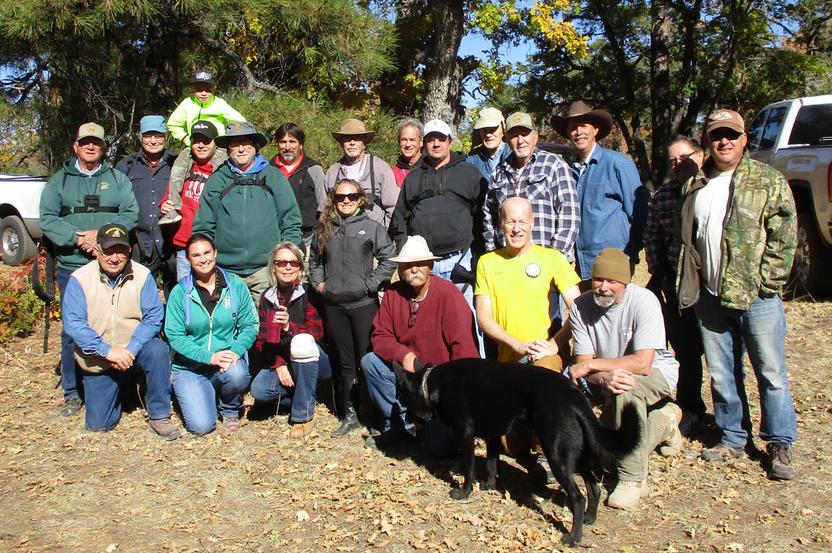 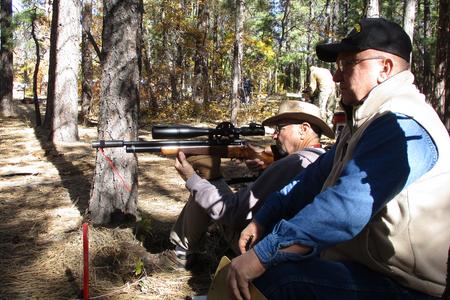 A big thank you to Steve for storing, hauling, and setting up the courses for the summer shoots at Mormon Lake.  Also, thanks to Kent, Don, Cole, and Wayne for setting the course and everyone who assisted in tearing it down.  Thanks again to Mary Ann for taking registration and performing the photographic duties. 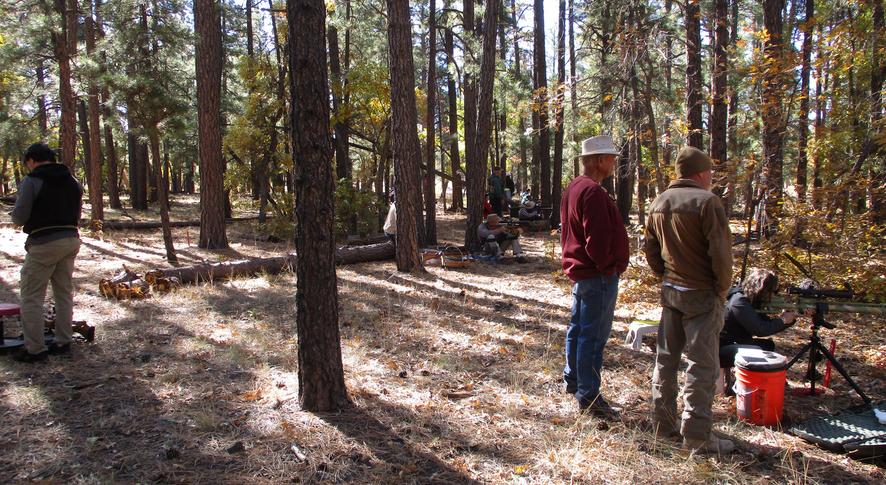 With the AZ state shoot being just 4 weeks ago, Nationals just 2 weeks ago, and EBR just one week ago, we were not sure how many shooters we might have to compete in the club’s Founders Cup Match.  We ended up with 20 shooters that came to compete in probably the best weather conditions that I have experienced in years.  I thought last month’s State shoot conditions were nice.  Today’s match was superb!

The day started with the temps in Flagstaff at 26 degrees F when we went for breakfast.  It was 31 degrees F when we left for the Mormon Lake venue and 43 degrees F upon arrival.  The day would warm up to the low 60’s, with not a cloud in the sky.  Brilliant sunshine and no wind, save for the periodic puffs here and there, but nothing to speak of.  The air felt…….brisk, and smelled great!

Cole and Mark shooting off for Open PCP First place 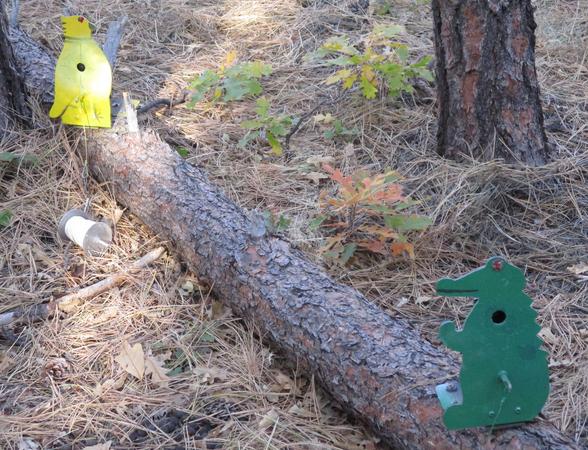 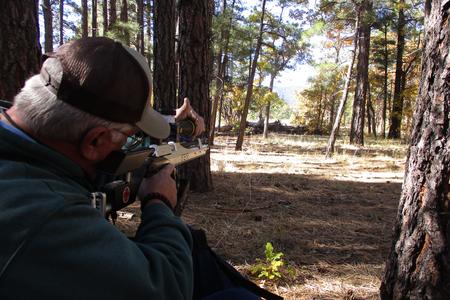 We set 5 lanes facing west on a north-south line, set 6 and 7 perpendicular to that line facing south, then set 8 thru 12 running south to north and paralleling 1 to 5.  It was a box shaped configuration with the lanes about 10 to 15 yards apart.  Not too tight but plenty of room to maneuver.   The stakes were set to take advantage of terrain features; downed trees, stumps, narrow gaps between trees, and anything that looked……interesting.  Steve came along with his rangefinder and had us set targets per his instructions.  He was shooting unlimited so there was no advantage to “remembering” the distances.  When all was said and done, the course worked out to be a 29.68 Troyer, not counting whatever wind might present itself, so was not figured in. 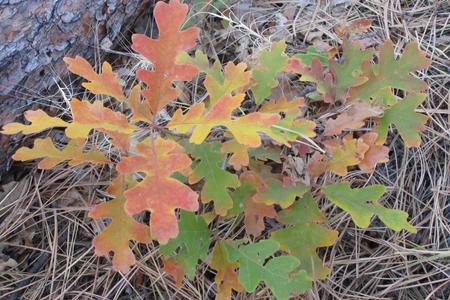 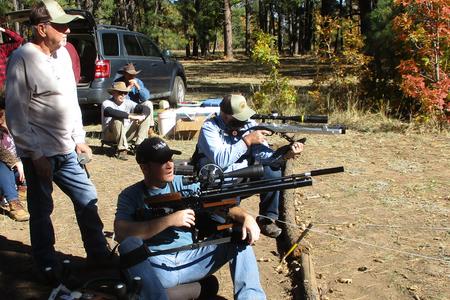 We had some ridiculously close “gimme” targets and some that were waaaaay out there and hidden in shadows.  The easiest target was 18.67 Troyer and the hardest was 40.33 Troyer.  Something for everyone, and as it turned out, everyone seemed to enjoy themselves immensely.  Lots of good scores were recorded for this shoot.  This was to be the last match of the season at this venue before we head back down to Ben Avery range for the winter months. 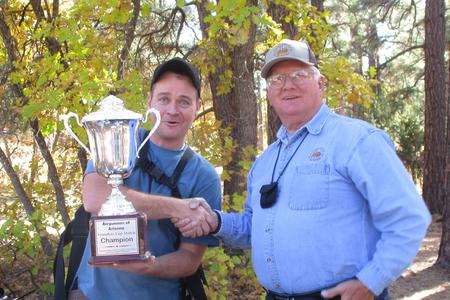 A wide-eyed Cole being presented the Founders Cup 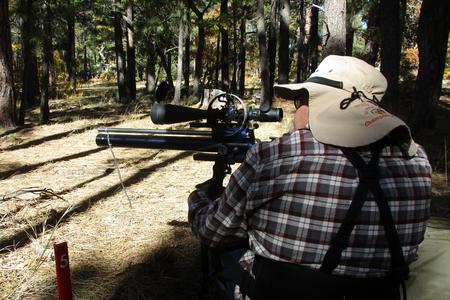 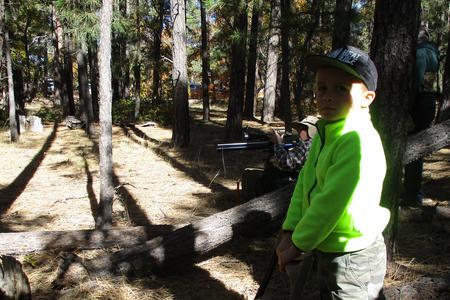 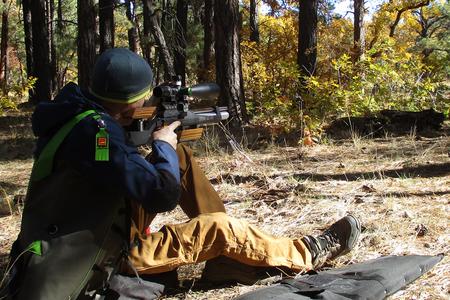