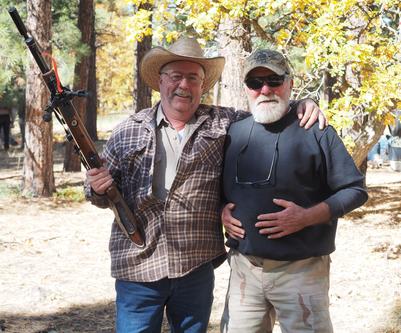 Next months match will be back in Phoenix at Ben Avery shooting range on the third Saturday of the month; November 19.

Hope to see all of you there. 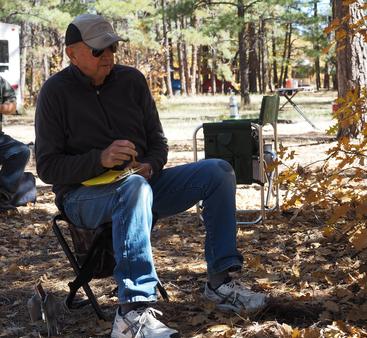 I want to thank Steve for serving  again as the northern AZ match director.  He was ably assisted at each monthly match by an assortment of both club members and visiting shooters.  These folks set all the targets, cleared lanes, collected targets afterwards, took pictures, and otherwise provided an extreme morale boost and moral support.  We thank you all and we love you all!

The entire club membership wants to once again thank Airguns of Arizona for sponsoring the match.  These guys go out of their way to promote the air gunning sports, and it is greatly appreciated.  This seems quite evident when the entire group gives a standing ovation when announced that AOA is covering the match fees.  Larry brings the PAD van to these events, fills air tanks, displays and demonstrates all the neat toys on board, and still maintains a passion for shooting.  Thanks Guys!  We really do appreciate what you do for us!

To finish out this collaborative effort, here are a bunch of random pictures taken by both Eric and Bill.  Combined, they took over 200 pictures, and although I would like to post them all, I have to restrict it somehow.  Thank you for your efforts. 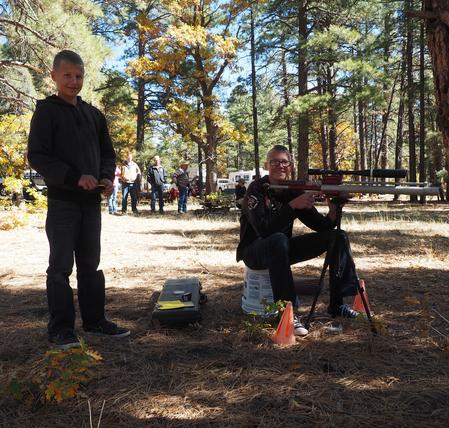 Nathan’s response to the match:

This is Nathan speaking for my family. We are really looking forward to the next shoot at Ben Avery. Also, we were very surprised to win anything with it being our first time. Everyone at the Pit was extremely welcoming and it made us enjoy the day even more than expected. I would like to at least add a special THANK YOU to Ben for helping out Liz and I with the use of his Daystate Wolverine, awesome gun, and for helping us understand the various ranges and reticles used during the competition. A Special thank you to Bobby and Sandy for teaching Sonja, Alexander and Ethan and letting all of them use their guns. We understand that it was to our advantage to be using Bobby's and Ben's guns and really appreciate that you allowed us in the competition with that factor in play. It has really put the inspiration into all of us. We look forward to getting our own guns and participating in future events. Thank you AOA for an awesome weekend from our family 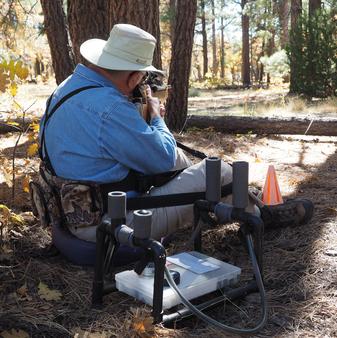 Nathan works in the same job that I used to do but in the White Mountain area. He originally approached me about helping him out with questions about hunting. I suggested he attend the upcoming match at the Perry Pit (Mormon Lake) to be able to see some practice scenarios and talk to other experienced hunters and somehow he convinced the whole family to come. They arrived a little behind schedule but we did what we could to introduce them and get them set up and ready. The youngsters really took to the game and were able to hang in there for an unusually long day.  I’m sure it was an interesting ride home [Open-mouthed smile]

Thanks Nathan for making our day!!!  It was sure cool to see the youngsters so excited to shoot and to see them do so well!  Also, very cool that your wife was in the shoot off and that your Mom took home some prizes. Sorry we didn’t get time to discuss more about hunting and also sorry to put you on the spot for NEW EQUIPMENT with the kids.

I don’t think I can say a HUGE enough thanks to Ben for his help and extreme generosity and to Sandy who also took a couple of inexperienced shooters in hand and showed them THE WAY. 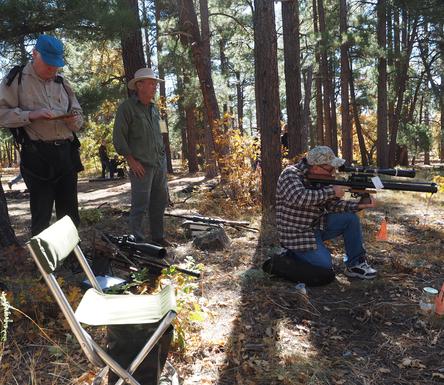 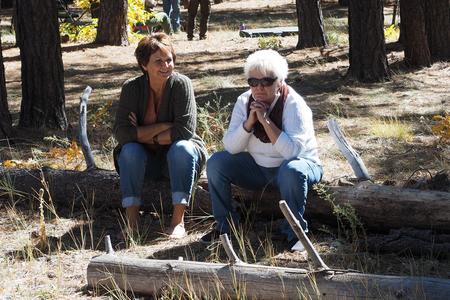 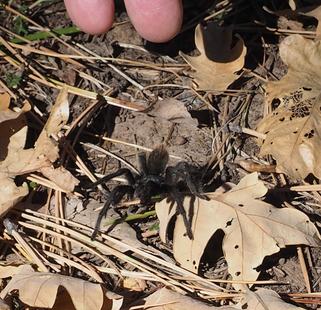 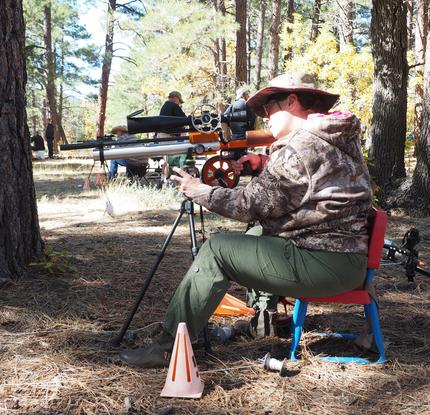 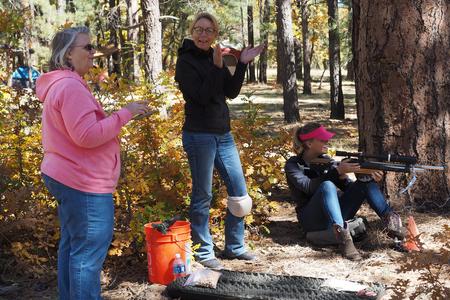 Bobby working with Nathan on sight in line while Liz and Laura look on.  The kids, Alex, Ethan, and Sonja are taking to this game like a duck takes to water.  Can you ask for a better family outing? 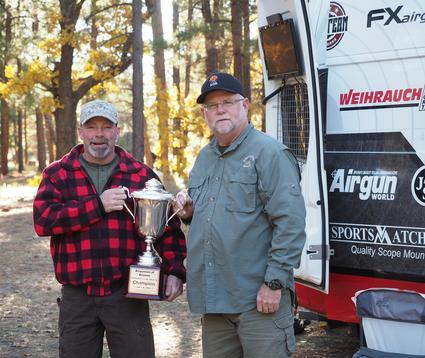 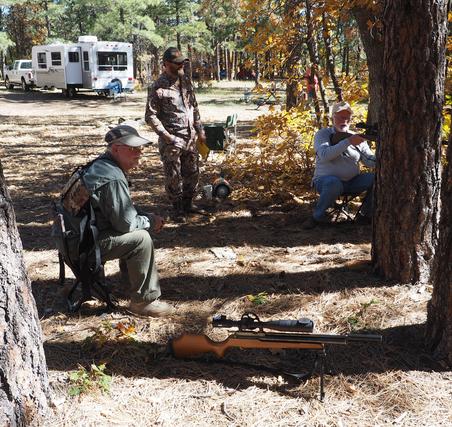 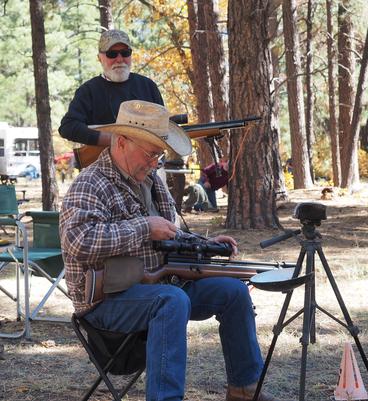 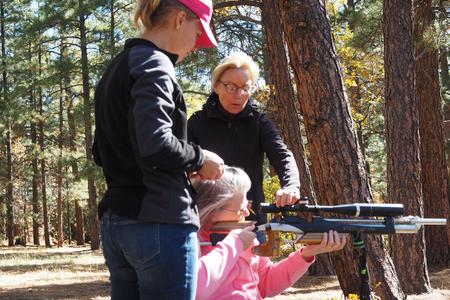 Bobby working with Ethan and Alex 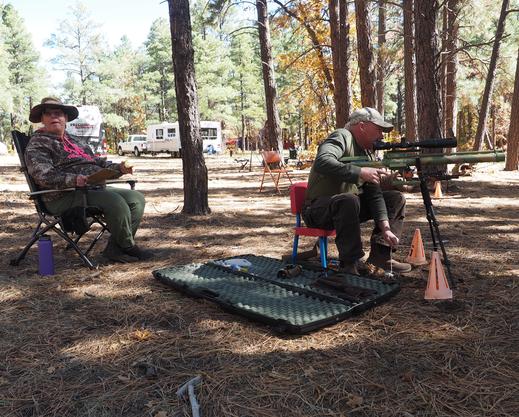 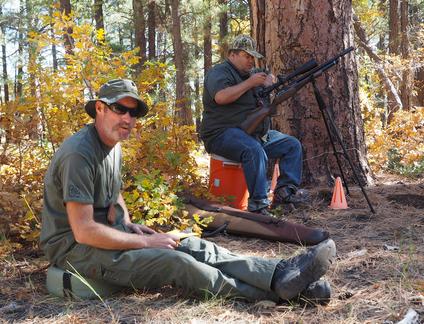 We have a new Founders Cup winner, we have a new season attendance record, and we are trying a new method of reporting all of this!  Steve, Bobby, and Nathan are all contributing correspondents by providing their views on the match, and what they saw and experienced.

Steve set up 11 lanes of two targets per lane for our Founders Cup match.  The Founders Cup was established 5 years ago by the original 4 founding members of the club; Robert Buchanan, Steve Buchanan, Seth Staples, and Larry Piercy.  Larry is the only remaining active member and is also the club President.  The match, and traveling trophy is to commemorate the club's founding , which was 24 years ago at this point in time.

We had 29 shooters at this months match!  The season attendance for our Mormon Lake venue has been phenomenal.  We had 21 shooters for both June and July.  We had 27 shooters for August, and 31 shooters for our State Championship in September.  The fun factor is increasing and attendance is doing the same. 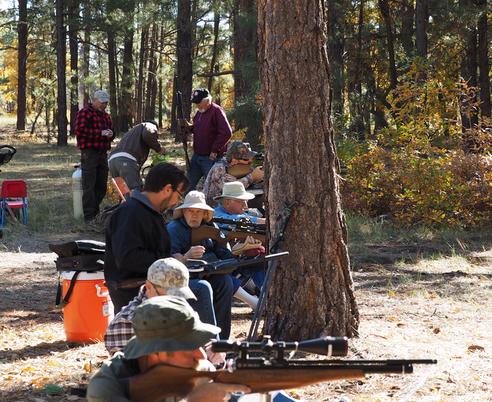 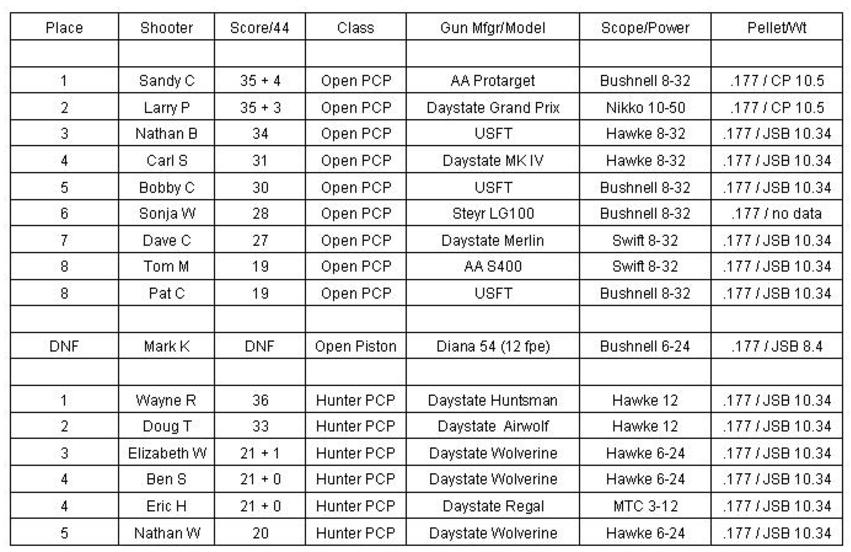 Laura and Sandy applauding a knockdown by Sonja 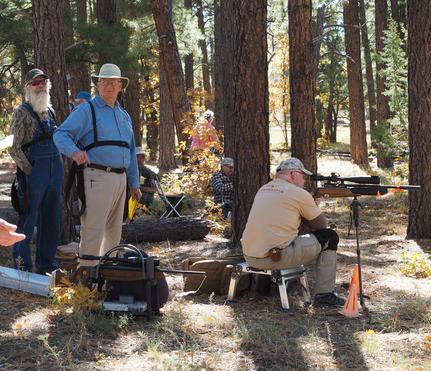 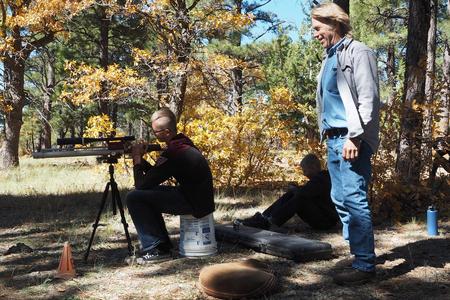 Although we had an extremely long day, we were not finished at the end of the match.  There were three sets of tied scores that needed to be shot off in order to determine winners.  We picked one rather challenging lane to use for the shoot offs and gathered behind the firing line to witness the spectacle.

First up in Open PCP class were Larry and Sandy, each tied for first place with a score of 35.  the procedure was to shoot one shot at each target.  Nothing like a little pressure to make things interesting.  These two went back and forth 4 times before Sandy finally edged Larry by a single point to nab first place.

Next up was John and Pat in Freestyle class, vying for second and third places.  Understand that this was Pat's very first match also, but was at the top rungs of a very deep field of competitors.  John prevailed in order to capture the silver medal.

Finally, we had a three way tie for third place Hunter PCP class between Ben, Eric, and Liz.  This was also Liz's very first foray into airgun shooting and she bettered the both of these guys by a single point.  Great shooting by all involved. 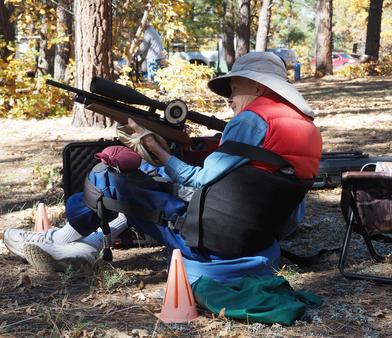 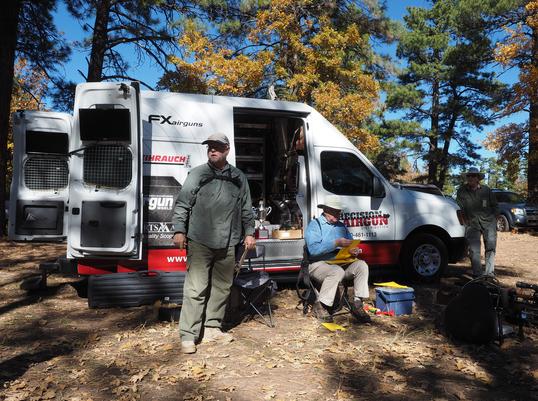 The sight in line.

Steve’s take on the festivities:

“It's a wrap, the northern AZ Field target season has ended for the year. Boy, will I miss it!  It's the funnest (Is that actually a real word?) summer I can remember as far as airgun shooting goes. More about why later...

I suppose a description of the area we hold the FT matches at isn't necessary. Just looking at the pictures says it all. I'm lucky to call this beautiful area home. We seemed to have caught the fall colors just right this year! The oaks and other shrubs, etc, have a awesome "orangeness" to them this year, Usually they are more of the browns and yellows. Even the smaller saplings having some red in them to sweeten the deal.

As with all our matches up here this summer, from June through October, we had wonderful weather! Saturday morning gave a hint for the rest of the day - wind. It started with light winds and ended with gusts up to as much as 15 mph. The temps were what I would call perfect. 41 as a low, around 10:00AM in the mid 50's and approaching 65 as a high. The lanes were placed facing both south and west which provided an interesting mix of switching conditions, lulls and gusts. Not knowing what to do for wind hold half the time I'd try to wait till the yarn tied to my rifle settled down a bit. This worked for the most part but on one shot at 52 yards, a gust came up just as I pulled the trigger. I watched the pellet strike at least a full inch out of the kill zone at 9 o'clock when I was aiming about that far to the right, Ouch!

One of the things I like about setting up a Field target course is keeping things fresh by putting the course in different locations and directions. We try to use natural terrain like logs, stumps or trees to place and elevate the targets, sometimes obscuring part of the target and forcing a change in position within the cones. I've been, let's say, gestured in an impolite manner at times by exercising my imagination, LOL, uh, remember when I tried 5 shooter per lane?! Okay maybe that didn't work so well, don't know til you try, aye. When this happens I know it's in jest, "but not always, lol" so I kind of like the ribbing. Besides we all need a challenge from time to time anyway, right???

Some drama...Stuff happens and I don't do it on purpose "most of the time", LOL. Well it turned out that two of my friends came up to me after the match and told me that they had shot a tiny branch on a oak tree which they had not seen. One pellet deflected so far it missed metal. Sorry  guys, I didn't see it when I set up the course. There was just enough room to avoid the offending little sucker if positioned just inside of the right cone. Not wanting to take a chance myself ???!!!.....

On that same note I watched two other friends in freestyle division, Mike and Pat, both trying Field Target for the first time, deducing which position to get into. There was a small rise in the earth making a prone shot via rifle attached bipod (in freestyle class), very risky with grass being in the way. Mike tried his darndest to make that shot work which included leg extensions to his Atlas bipod and some very thick tactical bags. LOL, nope after all that, a good couple minutes, he decided using the tripod was the way to go which I have to give huge a "atta boy" for!! You know it's hard to get bored with fun stuff like this happening every time you turn around. Thanks for coming out Mike and Pat, we look forward to seeing you this winter at Ben Avery.Great shooting BTW!

Speaking of fun. We don't take ourselves so serious as some other shooting sports I've been involved with over the years. How can we, were shooting air rifles right?!, LOL. You know how it is, FT is a competition and as such we all want to win. Sometimes you win and sometimes you lose, that's the way it is. Really I'm just as happy when a friend wins or tops his last score and get's that big smile on their face! Hang in there folks, your time is coming.

This is the "more about why later" part.

The fun we have together, camaraderie in our sport and friendship we have in our club is truly to be cherished!!! Old friends, new friends and future friends, though some are acquaintances at present. We have a fun bunch of people to hang out with and that's all there is to it! We are really looking forward to enjoying your company as long as the future will allow.

Robin and I would like to thank you all for being part of our lives! We would also like to thank those that help our club in any form. From cooking a meal, taking pictures, or set up and take down, as well as our club president, secretary and treasurer! Thanks, thanks, thanks!" 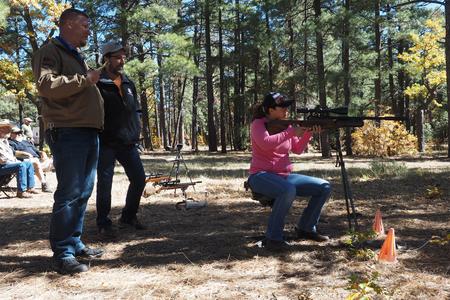 Steve is our Founders Cup winner for this year, with traveling trophy presented by Larry, one of the founding members of the club. 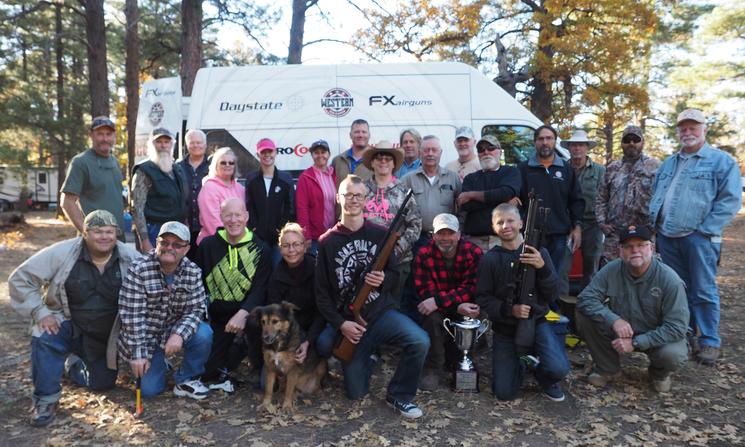 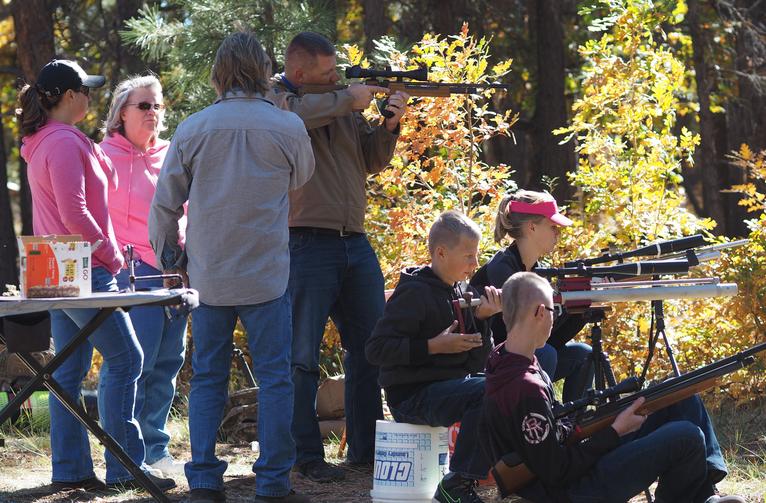