Note the visual difference between the shades and sunlit targets 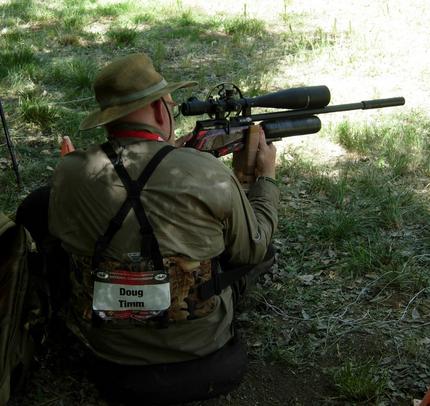 Sorry for bad pic, but this is two baby hummingbird chicks in the nest on Bobby's patio. 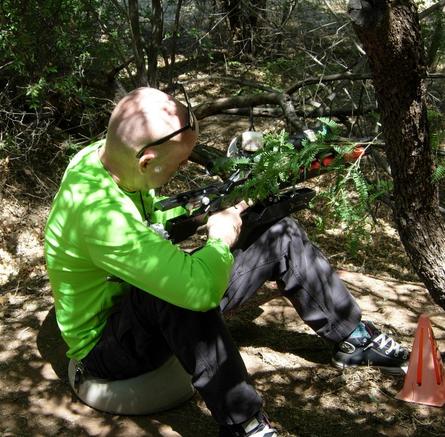 These guys set up 10 lanes with 2 targets per lane in some of the unlikeliest locations.  The usual near and far targets were present, as were some demonically small kill zones.  The bell target mounted inside an old car tire, hanging from a tree limb was rather novel.  Yes, it moved.  The little 3/8” KZ target nestled inside the tree limbs, surrounded by leaves was interesting.

The piece de resistance was the bird target mounted on a wooden frame and suspended about 25 feet in the air, but only about 18 yards from the firing line was a true work of art.  It was anchored on the back side but allowed to move with the wind and tree limb.  Yes, it moved also, especially after being reset.  How these guys managed to get the rope over that branch, much higher up in the air, is beyond me.  There must have been a good 100 foot length of rope to pull off that stunt!  It was a VERY interesting course and a lot of fun to shoot. 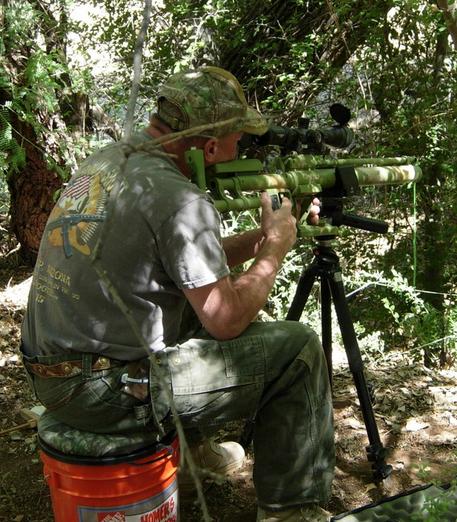 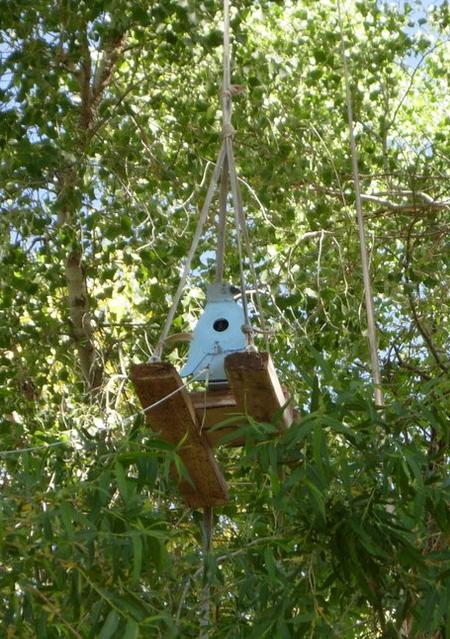 The bird hanging in mid-air

Every now and again, things happen to both surprise and delight you.  It could be the planets in alignment, it could be a single word uttered in a phone message, such as “Gumball”.  Regardless, it is exciting when groups of like-minded individuals come together for a single purpose.  In our case, it is called “Field Target”.  We put out the word for our monthly match and 26 loyal individuals responded.  We were destined to have a good time!

This past week Bobby, with the help of Don, spent a few days plotting, planning, and conniving a method to annoy, frustrate, and challenge the troops with this game of shooting steel critters.  Not present on our battlefield today, to any great extent, was the wind.  These past several months at Ben Avery range the wind has been a real whoolybugger at times.  Mercifully, Mother Nature gave us a day off today, so we had a chance to work on basics for a change.  We had a little bit of breeze from time to time, but nothing of any major consequence. 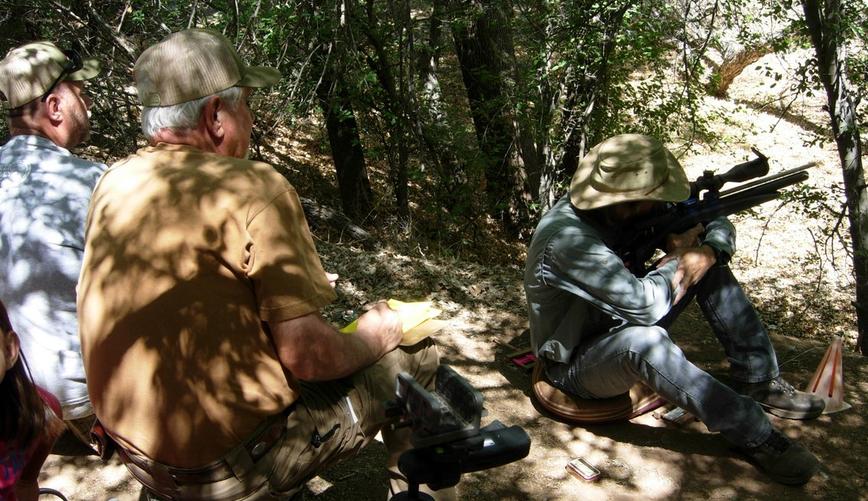 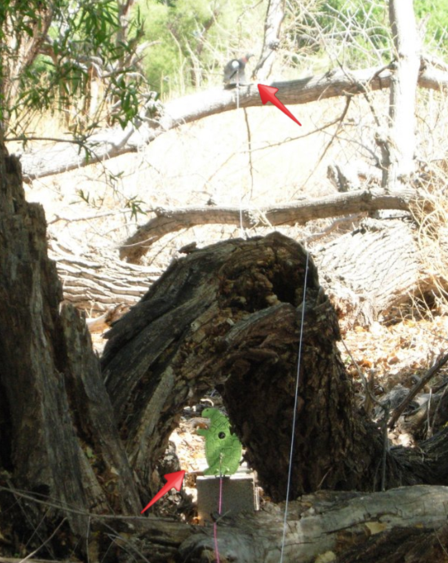 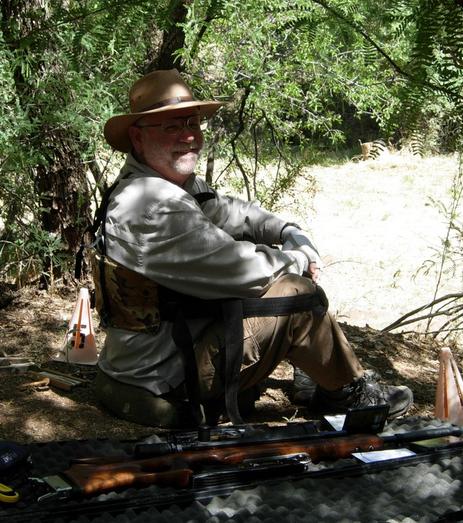 Our crew today - all 26 of us.  Ben is in there somewhere....hiding.  He doesn't like his picture taken.  Take note of Aubrey who is dead center with her arms crossed.  This is Shane's daughter who teased and tormented the living daylights out of Paddy throughout the match.  I think he loved every minute of it, and is shown immediately to her right.....with his hand behind her head. 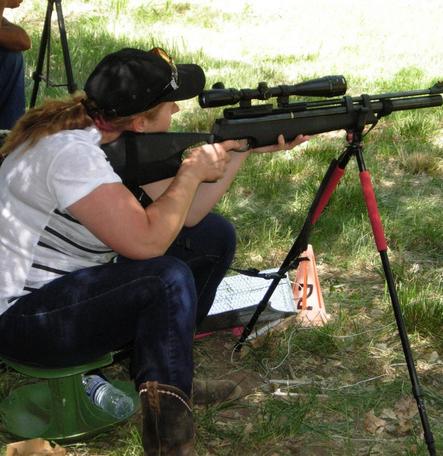 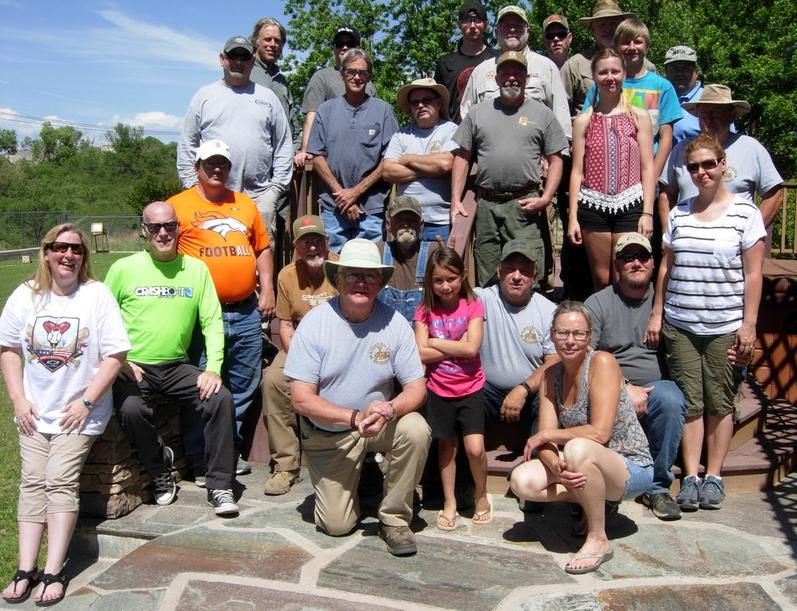 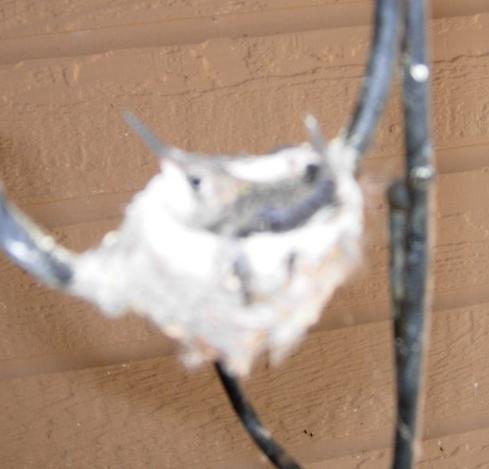 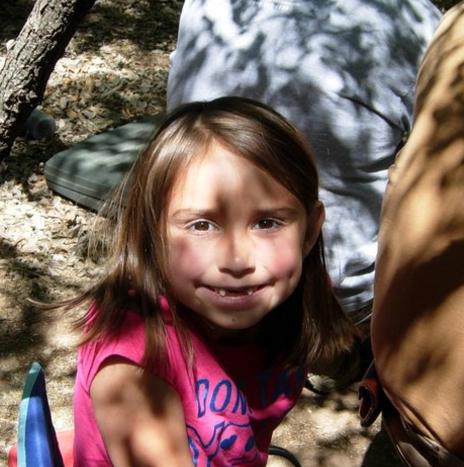 Shane, Mike, and Bobby.  Notice the shadows and brilliant sunshine beyond.

Next months match will be at Mormon Lake pending the lifting of fire restrictions in the national forest.  Word will go out the week prior if is a go or no-go and we are in contact with the USDA forestry rangers regularly to monitor this.  Rather be safe than sorry and we are not going to gamble with our members lives.  Field target is a nice to do, not a need to do when it comes to this, and we are grateful to be able to get together with each other whenever we can. 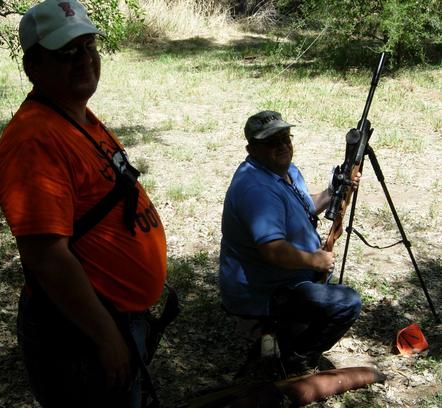 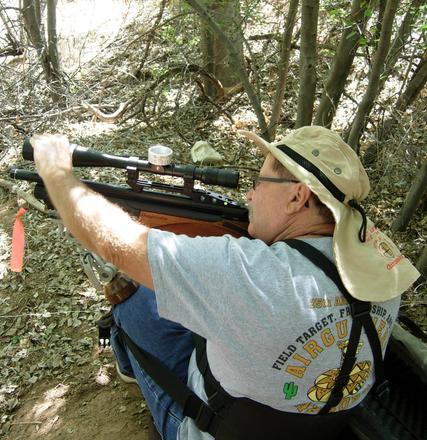 Thanks go to Bobby and Sandy for setting up, feeding, and allowing us to invade their property.  Thanks to Don for helping Bobby with the set up and to Wayne and Lynette for contributing to our lunch.  We didn’t have to take down the targets because some of the members want to shoot the course again. 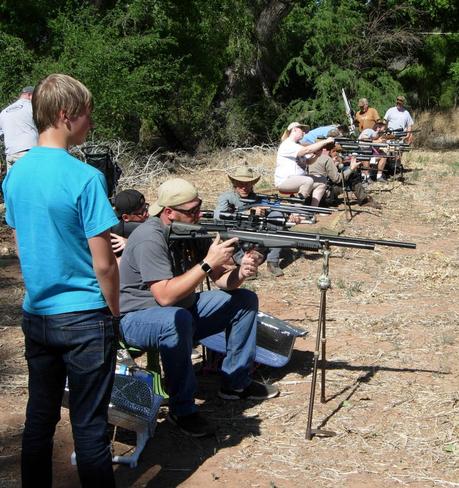 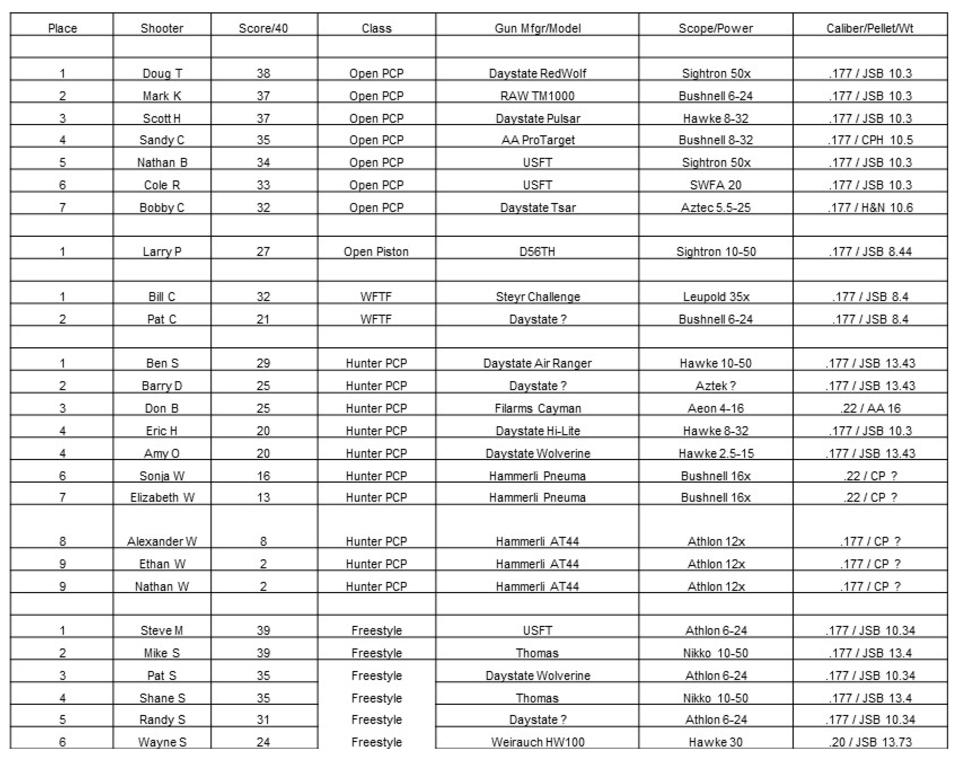 Airgunners of Arizona May Match Report 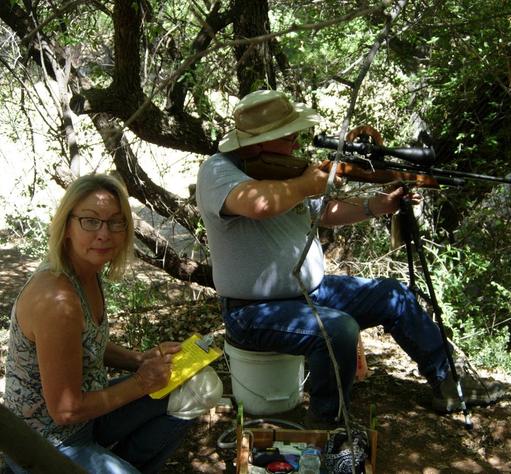 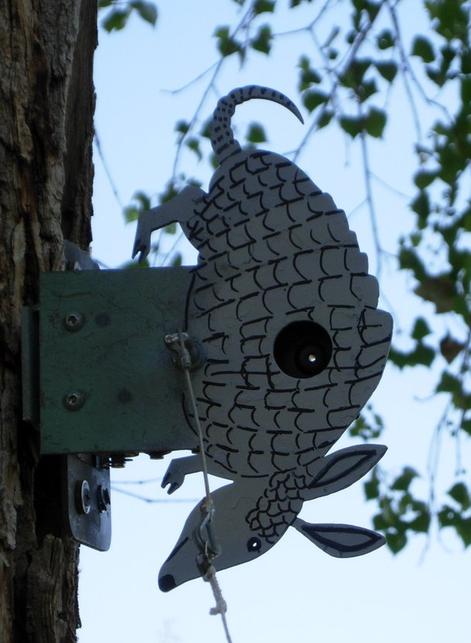 Here are the scores and equipment stats

The day started beautifully clear and almost free of clouds.  The sunshine was brilliant, but the trees provided enough shade and dappled sunshine to create a lot of dark vs light patterns.  There was just enough vegetation in the way to force you to make sure you had a clear pellet flight without nipping a leaf, vine, or errant twig.  Temps were comfortable but would warm to the low 90’s toward the end of the match.  Typical Arizona weather.  We love it!

Other than the fact that it was Armed Forces Day (my flag was prominently displayed at my home), we had several other notable anniversaries; Nathan and Elizabeth were celebrating their 19th wedding anniversary, along with their 3 kids, and Amy was celebrating a significant birthday, which we cannot mention.  Happy anniversary and birthday to these members who chose to share their special day with us. 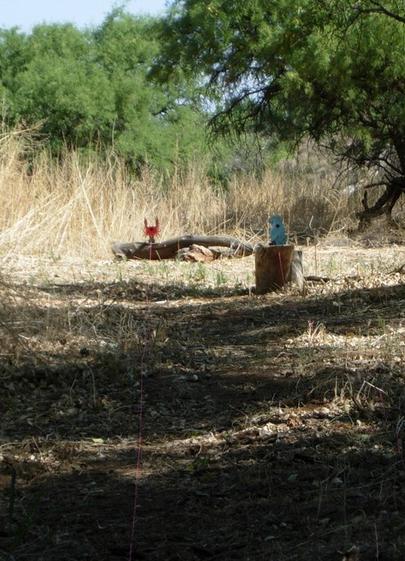 this is Aubrey, minus front teeth.  She tormented and teased Paddy all day.  He loved every minute of it!

The sight in line 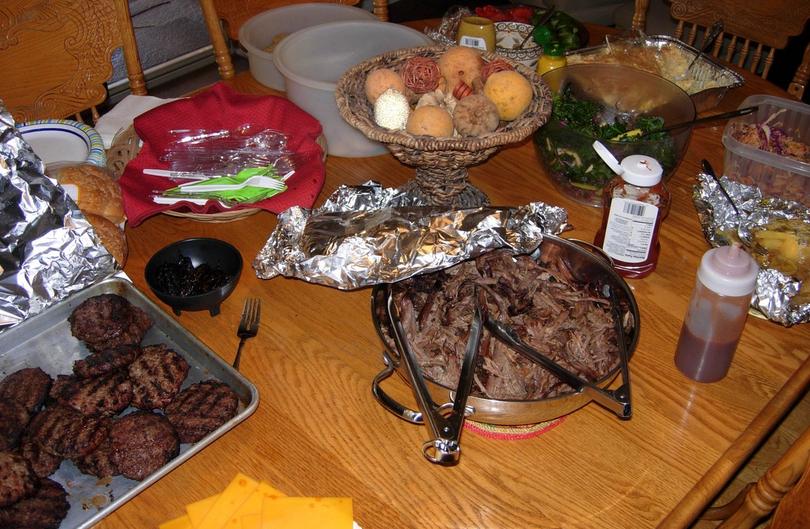 Anyone care to guess who the mystery Home Depot plumber is???  LOL!!

Sandy provided burgers and brisket and salad, while Wayne and Lynette provided potato salad, and cookies.  Bobby’s homemade ice cream followed this.  After we ate and the scores collated, awards were presented and a club discussion followed regarding Ben Avery range changes and the fire restrictions currently in place for Mormon Lake for the summers’ matches.  We may be the club officers, but our paid club members all have an equal say in how the club is run.  That is a big part of our success and what makes us “family”.

We had 5 classes competing today.  Larry was by his lonesome shooting Open Piston (c’mon guys, I know you have springers hidden away somewhere), and Bill and Pat were at each other’s throats in WFTF.  Steve and Mike were trash talking each other, along with the other 4 guys in Freestyle.  Seven of us were vying for the top spot, and shooting some great scores in Open PCP, but the biggest surprise was 10 shooters in Hunter PCP!  With the wind at a minimum, there were a lot of good scores produced along with a number of tied scores.  With the smell of burgers and brisket wafting in the breeze, no one wanted to have a shoot off, so the ties were broken based on the highest number of “X’s” shot in a row, based on which lane each shooter started.  Don’t get me wrong, these guys like to shoot and are quite competitive, but when the smell of food is in the air, priorities tend to waver. 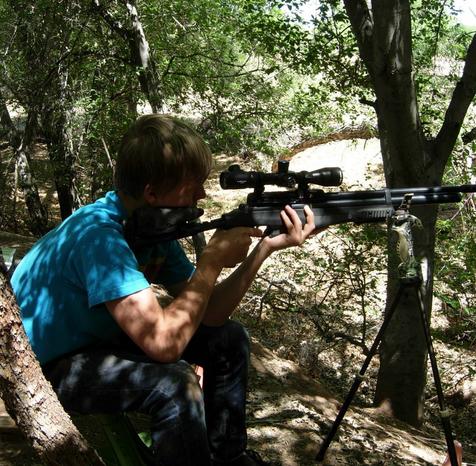 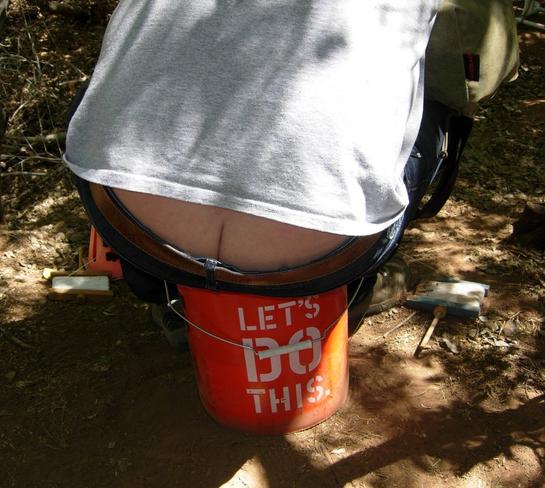