For those who suffer from hay fever, the pollen and spores floating through the air contributed to bouts of sneezing, runny noses, and itchy eyes.  Thank goodness I brought enough Kleenex with me…LOL.  I used it all and could have used more.  The colors were worth it.  Aside from the vivid greenery, we had vast amounts of yellow, orange, and blue flowers from the mallow, brittlebush, creosote, Indian paintbrush, and lupine that are currently in bloom.  Wait until the cactus starts blooming.  The flowers that blossom from the various cacti are brilliant in color and quite large.  I love the desert! 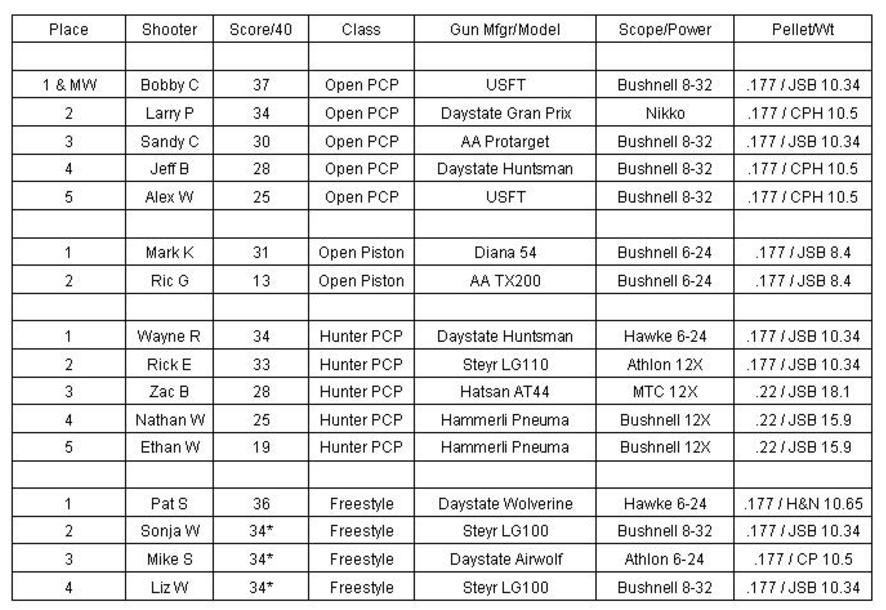 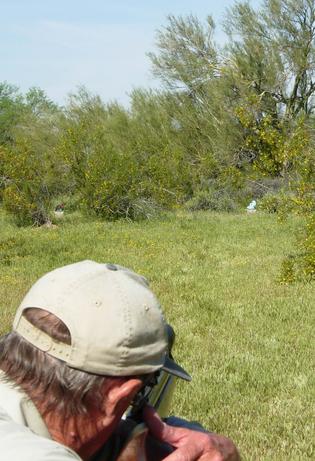 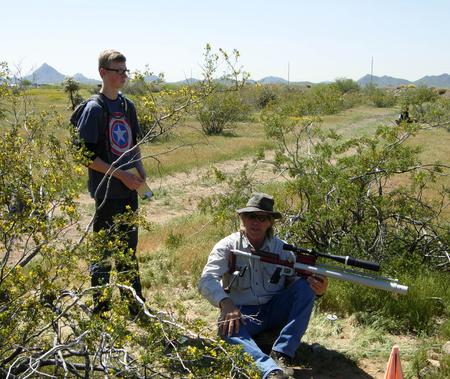 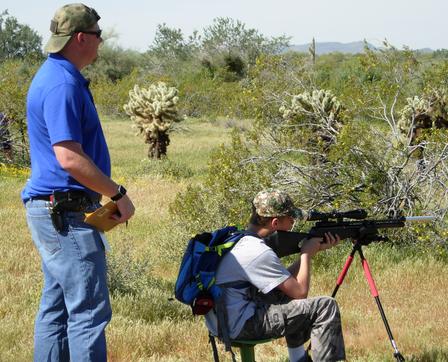 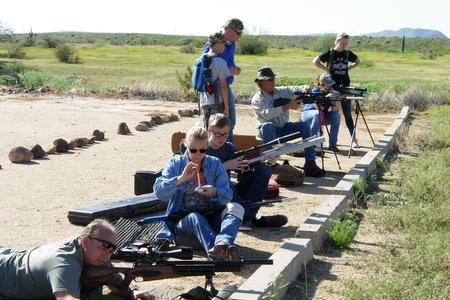 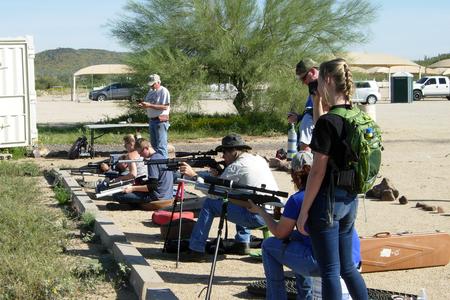 In Freestyle class there was an even more intense scoring battle going on.  Pat and Mike (the old man) were shooting together.  Both of these guys are characters and I can only imagine the friendly banter going on during the match.  Pat ended up with a score of 36/40 with Mike 2 points behind.  But wait!  Liz and Sonja, mother and daughter, were shooting together.  They both also shot 34/40 which gave us a 3 way tie for 2nd and 3rd places.  We gave these three shooters their choice for breaking the tie; a shootoff, or counting the longest string of consecutive hits on the scorecard. Coin toss was out for obvious reasons.  Due to the time and heat factor, it was decided to use the longest string of hits.  Mike thought he had this one in the bag.  We pored over the scorecards and waited until the very end of the award ceremony to announce the winners.  Liz finished in 4th with 11 hits in a row.  Mike finished 3rd with 15 hits in a row, and 17 year old Sonja took 2nd with 16 hits in a row.  This little girl can shoot! 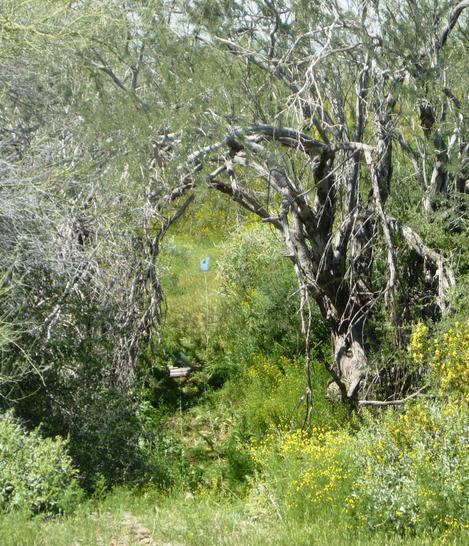 Our St. Patrick’s Day (OK, so it was a day late) field target match at Ben Avery shooting range in Phoenix was about as delightful a day for shooting as we could have asked for.  BRIGHT, clear skies and temps that started in the upper 60’s and rose to the mid 80’s made for great shooting conditions.  The wind even cooperated being dead calm at times (out of the north), then shifting and picking up to no more than 10 mph (variable out of the southeast) at other times during the match.  With all the rain we had in the recent past, the desert was thick, and lush, and GREEN!  With the various grasses being so tall, it was easy to track the wind as you can see both direction and intensity by the way the grass was rippling.  Also, the mirage was boiling pretty good as well.  It was causing some minor refraction on how the targets appeared through the scope.  A very interesting phenomenon. 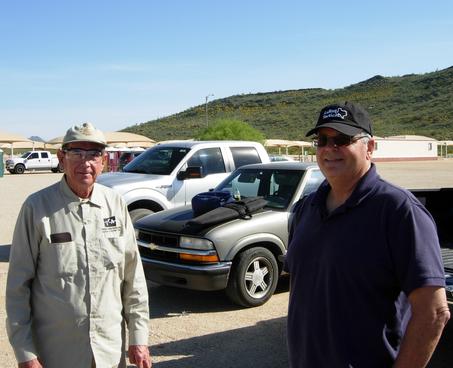 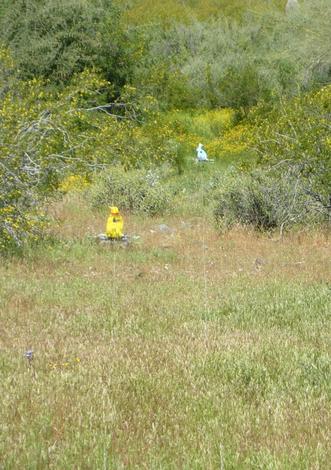 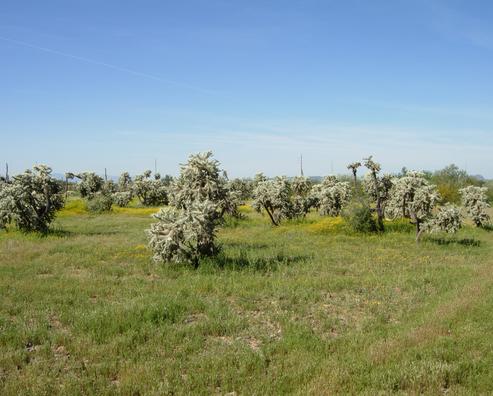 So much for the botanical description.  We had 16 shooters that competed in four separate classes on the 10 lane / 40 shot easy course that calc’d to be a 29.26 Troyer without the wind, or a 34.53 with the wind.  The fact that it was intermittent in duration; I will split the difference and call it a 32 Troyer.

There were a couple of pretty good scoring battles going on today.  In Hunter PCP, Wayne and Rick were dueling back and forth with Wayne (34/40) edging Rick (33/40) by a single point.  In 3rd place, Zac was so excited that he finally won and award pin.  Gotta admit, the award pins are pretty nice.  They are about 1” square and in the shape of the state of Arizona.  They are colored either Gold, Silver, or Copper (bronze looks too much like the gold) and have the club logo printed in the center. 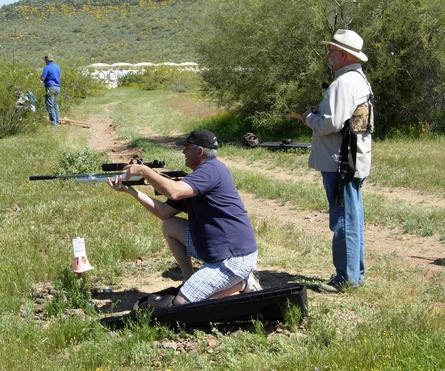 We had three club members, whom we have not seen in a while, come out to compete.  Jeff, Ric, and Rick all were able to attend at the same time.  We were glad to see all three of them and spent some time catching up with each other.  This just made the day that much more special.  We should also see Rick a lot more in the future seeing as he retired just three weeks ago.  I have been retired for just over two years and highly recommend it! 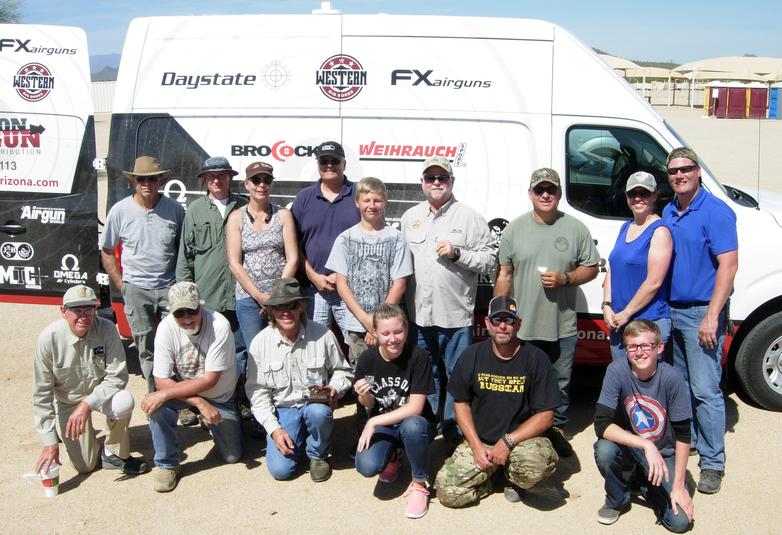 This will be the last match shooting at Ben Avery range until November.  We will shoot in Camp Verde in April and May, and then move up to Mormon Lake for the matches from June through October.  Every club match has a different layout and conditions to challenge the shooters.  We also shift locations in order to beat the heat during the summer months and make life more enjoyable for everyone.  C’mon out and join us.

Thanks to Mike and Wayne, and Wayne’s buddy for helping to set the course and trim the vegetation for this match.  Thanks to everyone who shot for assisting in taking in the targets, clamps, and markers to put back into storage.  These little things may not seem like much, but are a BIG help in allowing the match to run smoothly.  Thanks also to Larry Piercy and Airguns of Arizona for bringing the PAD van to the match and filling air bottles afterwards.  Larry returned home from a lengthy road trip one day, then turned around and came out to shoot the following day.  We really appreciate that.  Thanks Larry! 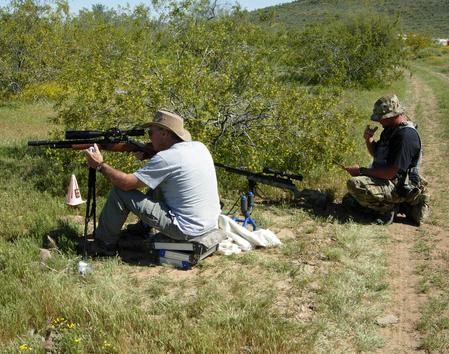 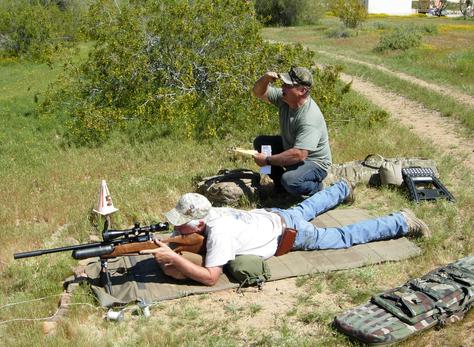 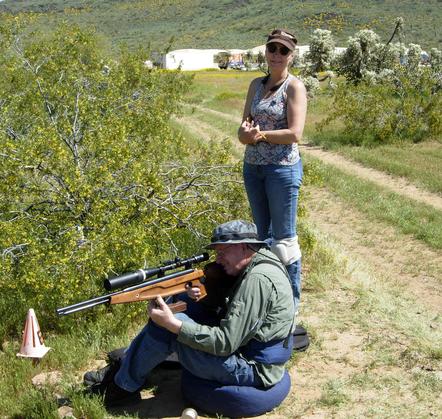 In Open PCP, Bobby won the Pot ‘o Gold with a 37/40.  In Open Piston, yours truly took first with a 31/40.  Lane 2 and 3 were my downfall.  I lost 6 points on those two lanes!  The targets are situated on the far side of Dead Man’s Wash and protected from the wind by heavy vegetation.  On the near side we had fairly open vegetation, but easily (wind) readable.  Dead Man’s Wash is about 20 feet wide and the wind funnels up through there unnoticed.  It kicked my butt for six points as I could not see my misses.  Aaarrrggghhh!  I finished up the match on lane 4, which was the forced position lane; 2 shots kneeling on one target, and 2 shots standing on the other.  I cleaned them.  Had I not missed those previous 6 shots, I could have tied Bobby.  Looking over the scorecards while writing this, I noticed a number of other shooters had the same problems with those two lanes.  Oh, well.  All in fun, and a fun time we did have. 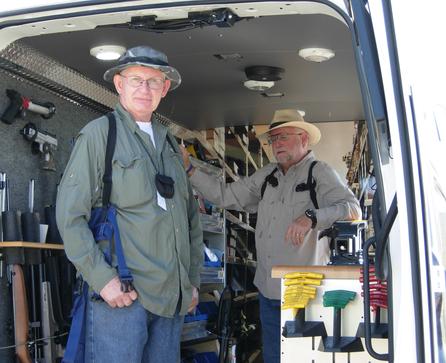 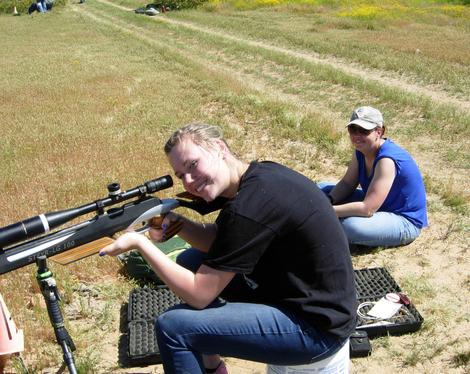