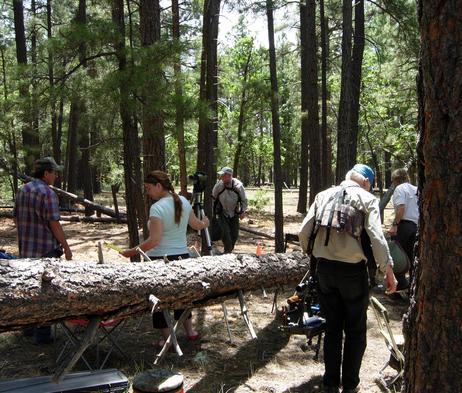 Steve and Don set an “V” shaped course with 6 lanes facing southwest and 6 lanes facing southeast on each leg of the “V”.  Each lane had two targets situated that allowed for a 48 shot match.  With the lighting conditions varying from light to darker, it was a challenge to ascertain the distances, even when you could see where the misses impacted the target face.  We did not get the chance to check the distances and kill zone sizes with a laser range finder to determine the Troyer factor.  Sorry, maybe next month.  Although some of the targets were a bit tricky, it did not diminish some of the scores that were posted.

Larry, knowing his picture is being taken.

Open PCP class had a lot of shooters competing today; there were 11 of us.  At the top of that heap was Garrett who shot 46/48.  Great shooting!  It is important to note that he was able to do that with his 100X scope!  At least that is what he had written on his equipment list….LOL.  Nathan took second with only one point behind, and yours truly took third with a 43/48.  I missed two shots in a row toward the end of the match because I ranged them at 55-56 yards.  They were only 52 yards, but you could not tell for all the pellet hits all around the KZ.  Like I stated earlier, with the lighting changing during the match from fairly bright to darker, it changes the distance perception.  It got me but good!

Waiting their turn to shoot;

Garrett (hamming it up) on left,

Ben's arm and leg in background,

Here are the scoring and equipment breakdown; 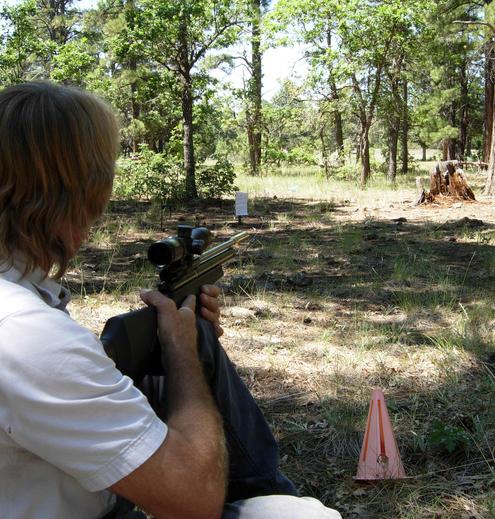 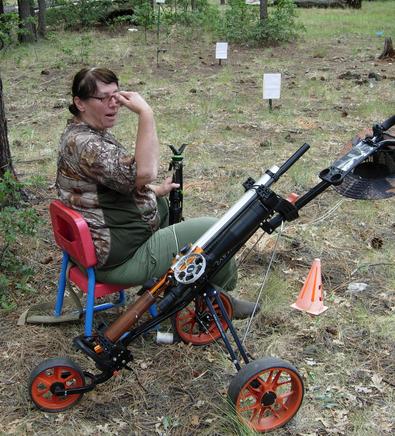 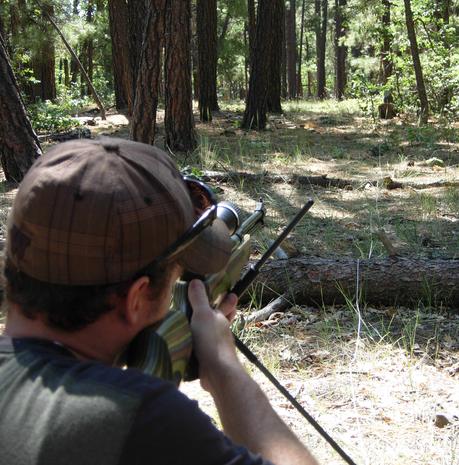 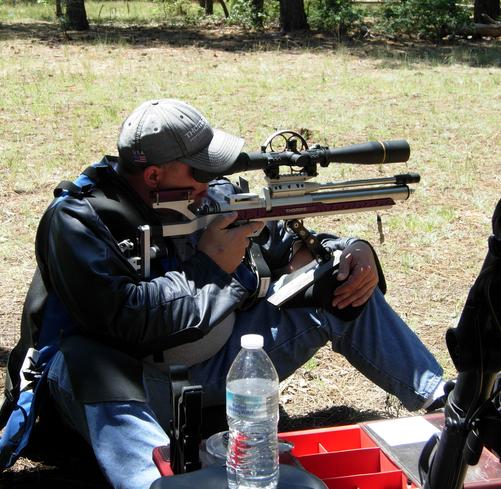 As for competing, Mike (of Thomas gun fame) and Bill were the only two shooting WFTF class.  There were no designated forced position targets/lanes for this month, but that did not stop these two guys from adding their own.  They would shoot sitting on one lane, then decide to shoot standing on the next, followed by kneeling, etc.  This turned out to be good practice for them and did not seem to affect their scores too much.  Mike shot a 42/48, with Bill right behind with a 40/48.  Bill told me that during the match, Mike indicated that the next target was going to be standing.  Bill’s response was, “Dude, that is only a 3/8” Killzone!”  Mike’s response, “So?”  From all the laughter we heard, they must have been having a good time.

This is Rex shooting his TX200 later in the match.  This will give you an idea of how dark it got towards the end of the match.

Tom with his really cool chapeau 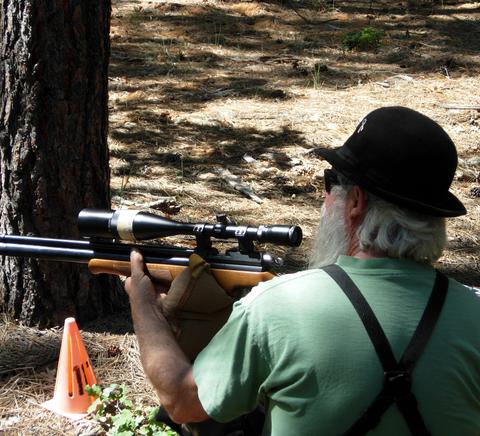 Robin with her rolling gun caddy 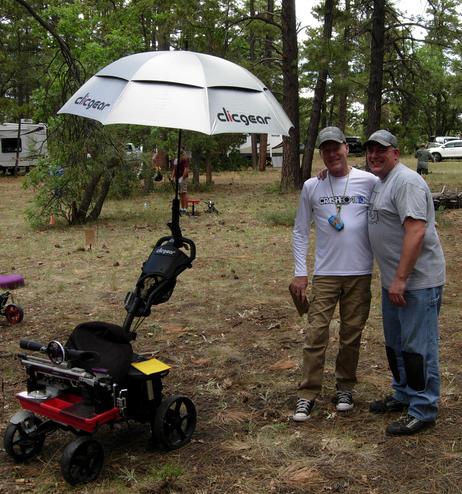 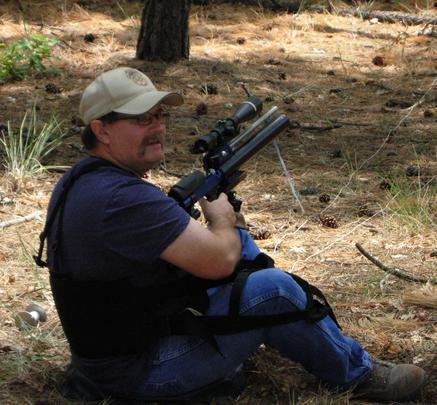 Larry refilling air bottles with Steve and Bobby looking on. 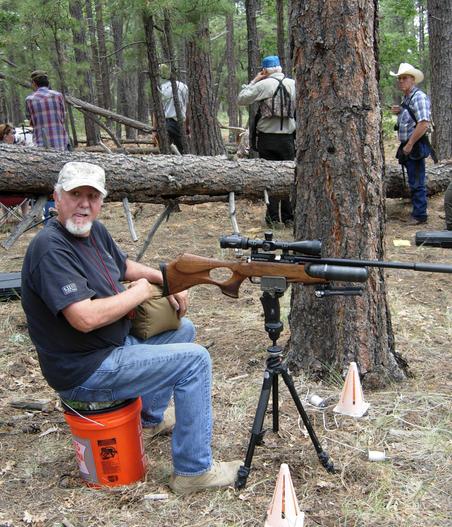 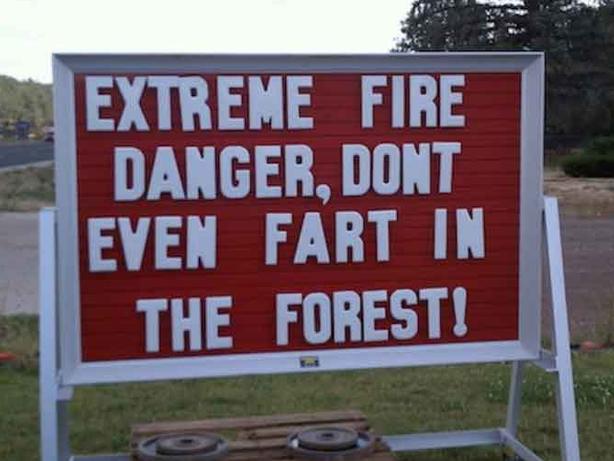 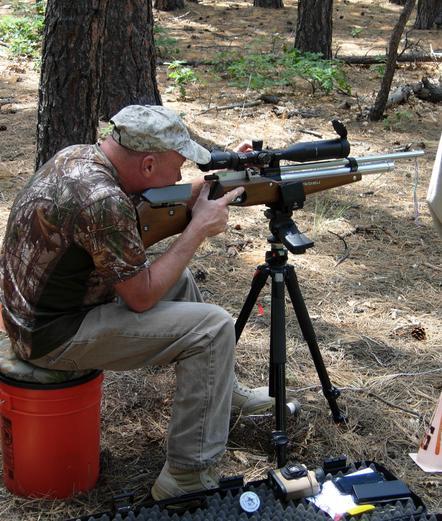 After the match and distribution of awards, we had a short meeting of club members to discuss the upcoming state championships in September.  The match announcement and registration forms will be forthcoming via email and will be posted on the club and AAFTA websites.

In Freestyle class, it appears as if John, aka Papa Smurf, has been practicing.  He shot a smoking 45/48 with Mike, aka “The Old Man” was hot on his heels with a 44.  Steve, our match director, was playing with a new gun and finished third with a 43.  I can see how these guys can shoot these good scores with the way they shoot.  They have their guns clamped into a tripod that allows them to zero in on their target without the gun moving….or even being held.  Add the ballistic programs on their smart phones and their range finders, and it would seem it would be hard to miss.  I did ask when are they going to move up to a competitive class, but they all seem to be quite happy competing amongst themselves and having a good time.

Thanks, once again, to our club President, Larry for bringing the PAD van to the match and filling air bottles afterwards.  With any luck, we should have the four club founding fathers at our state match to celebrate the club’s 25th anniversary.  There are lots of neat things planned for that match in addition to it being an AAFTA grand prix, as well.

Thanks to Steve and Don for setting up the course and to everyone who helped take in the targets afterwards.  That is always greatly appreciated. 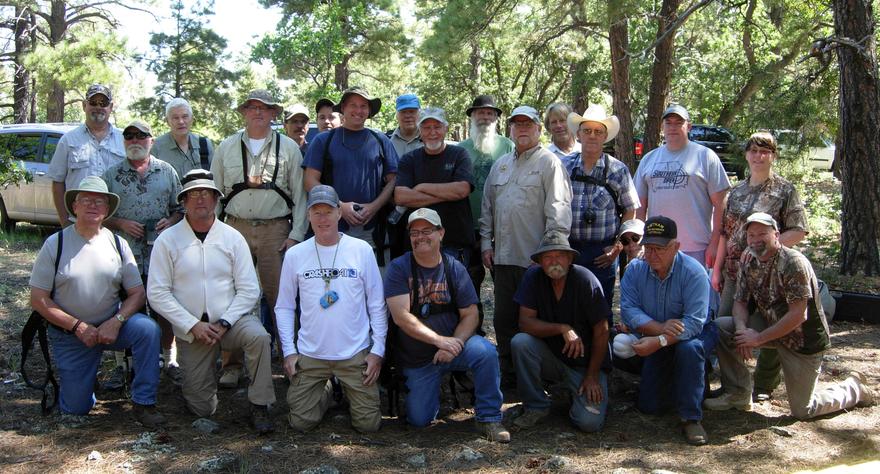 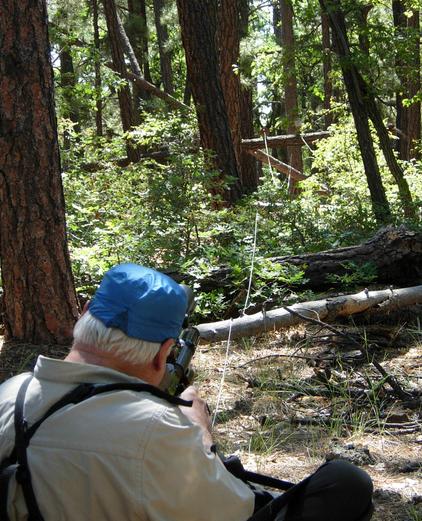 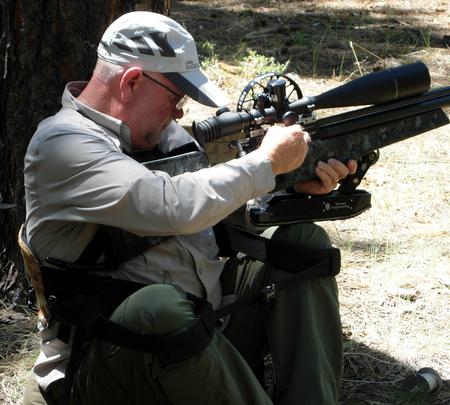 This gives you an  indication of what we could have been up against this past month.  As a disclaimer, this was not an actual sign posted in AZ, but one that a buddy sent to me.

The end of the log was the point of the "V" where the course shifted directions.  The sky is just starting to turn darker at his point. 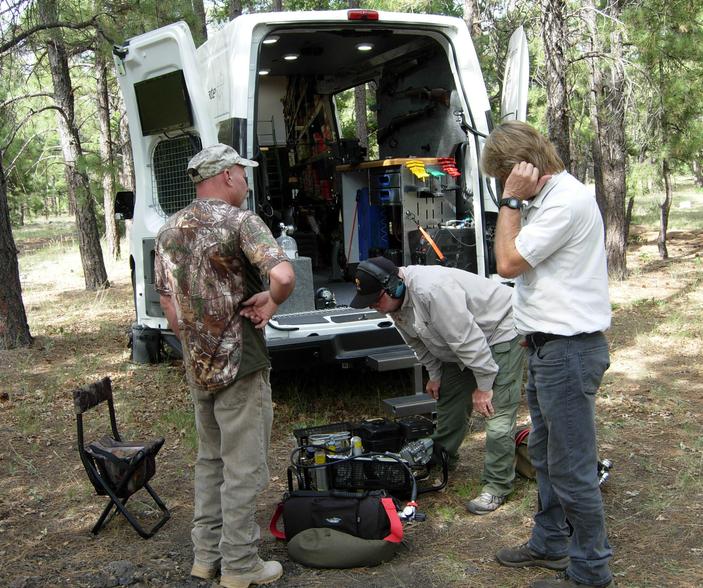 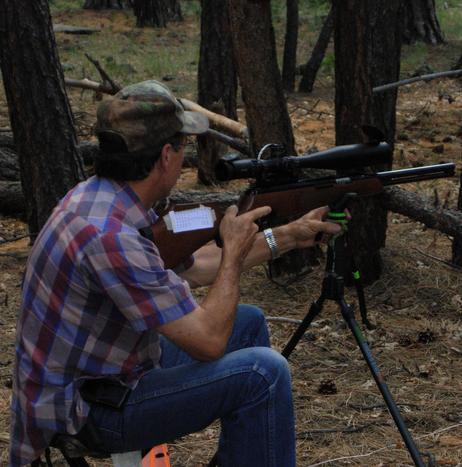 Between the extreme fire danger with stage II fire restrictions in place for the past month, and the possibility of heavy monsoon rains that are starting to emerge to wet things down a bit, we were not sure if we were going to have a match in July.  There has been a little rain to moisten things up at our venue in northern Arizona, but the big stuff held off to give us delightful conditions for a wonderful day of field target.  The skies were a bright, patchy blue that yielded to heavy cloud cover and darker conditions, and the winds were milder than expected.  They swirled a bit and then diminished to almost nothing, only to pick up again right after the match concluded.  The temps were in the high 70’s and the added humidity made it feel just a bit muggy.  Considering the heat we have been experiencing, this was quite enjoyable!  Thunder could be heard grumbling in the distance and we did have the occasional drip here and there, but nothing to stop us from our quest to slay the hordes of steel critters that were poised to invade us.  We had 24 shooters from 4 states that traveled to play the pellet games today. 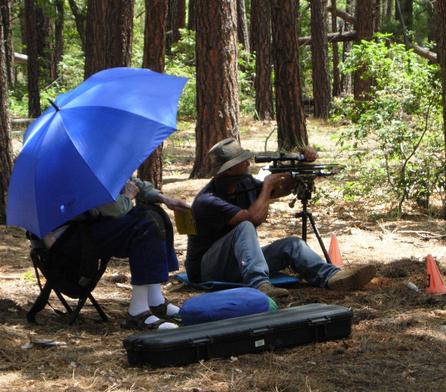 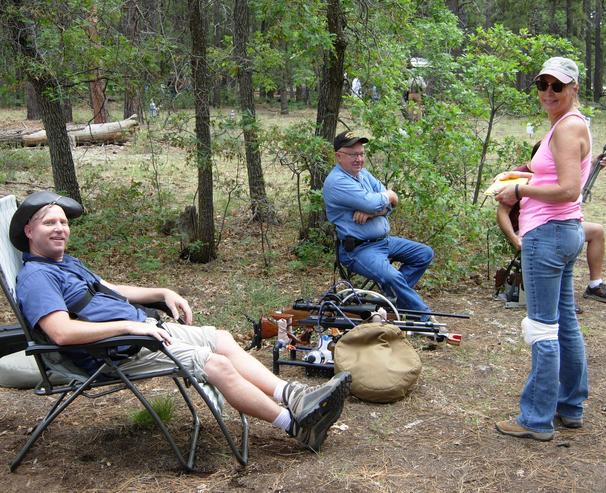 Doc is scoring for Don, one of the course setters. Not sure if the umbrella is for the sun or the potential for rain....or both.  It is still fairly bright at this early stage of the match.

This is Cole shooting his HW77 early in the match.  Notice how bright it is at this time.

Here is the "Old Man" on the left, licking his lips and contemplating lunch, and Steve on the right, both shooting freestyle class.  This is a non-AAFTA class, but these guys enjoy shooting this way none-the-less.  With guns clamped into the tripods, they don't even have to hold the gun!  They are having fun and use this as training for their long range, big bore rifles.  Besides, this game is a LOT less expensive.

Here is Mike, on left, shooting his Thomas rifle.  It is one shooting machine!.  On right is Bill (left) and Mike (right) in a lighter moment between shots.  That contraption on the left holds Mike's gun, air tank, umbrella, seat, shooting gear, and has a small milling machine mounted on the back to make repairs on his gun, should they be needed.  This guy comes prepared!  NO, there is no milling machine, but there seems to be room to mount a keg.

Don was our only Hunter PCP shooter and some of the lanes really challenged him while others he hammered to finish with a 32/48.  In Hunter Piston, Cole was on a tear and also finished with a 32/48 and was my shooting partner for the day.  This young man shot very well with his HW77.  After last month’s match, it was found out that his piston spring was broken in two places and the seal was torn.  Now that it is fixed, he is going to a force to be reckoned with.  Rex was close behind with a 29, and William finished in third with a 20.  William was experiencing some dramatic POI shifts during the match and feels he needs to address his scope between now and next month.