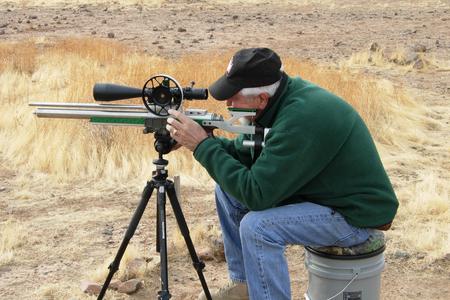 Pat S, also on his way to a perfect score 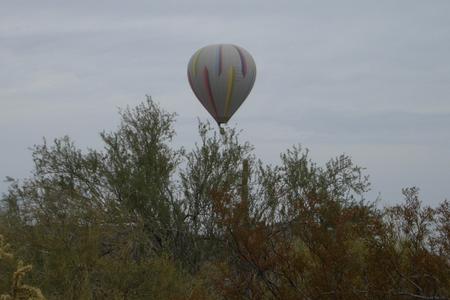 Immediately after the shoot off, awards were announced and distributed, and targets, strings, clamps, etc were pulled and stored away until next month.  Everyone present chipped in to help with that as they always do.  Thanks guys!

For first place in Open PCP, Bill outscored Larry by one shot, with Larry garnering second place.  Next up were Bobby and Sandy.  Sandy cleaned Bobby’s clock by nailing both of her shots and laying claim to third place.

In freestyle class, Mike edged Pat by one shot to claim first.  All told, great shooting was displayed by all and all seemed to have a good time.

Here is the scoring and equipment recap….. 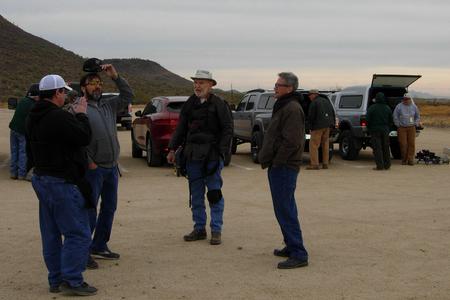 Twas the week before Christmas (sorta), and all through the club, the “Old Man” (that would be Mike) is gloating and not going to be fit to live with for the foreseeable future.  Yeah, I know that doesn’t rhyme, but, Hey, it is the Christmas spirit that got into us as we set one of the easiest courses we have had in a long while.  We were expecting winds which did not materialize until almost the end of the match, hence a very “doable” course. 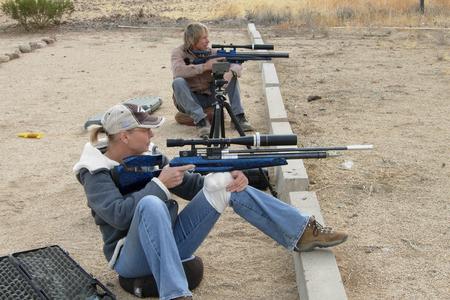 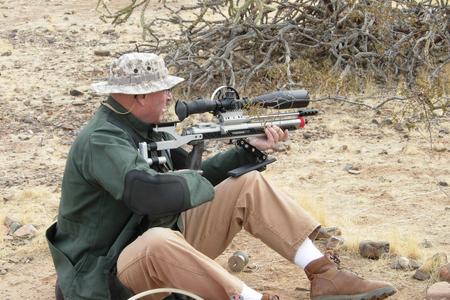 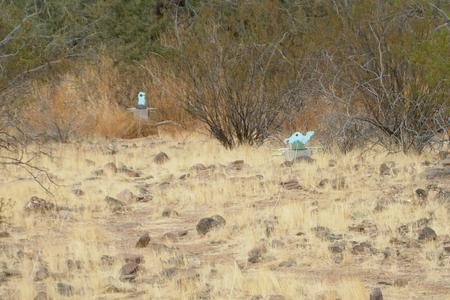 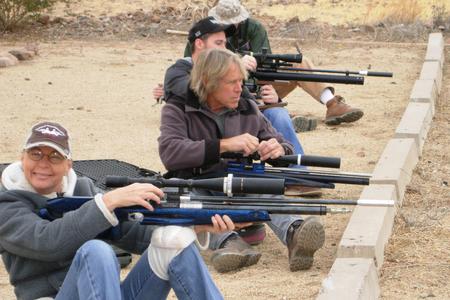 Match day started off in the mid 40’s and warmed to the mid-60’s by the end of the match with a wind chill that made it feel like the mid-60’s…LOL. Nice sweatshirt weather.  We had overcast skies with high clouds and just a slight shifting breeze early in the match.  About halfway through, the sun came out for a bit and created quite a bit of glare.  The wind picked up dramatically towards the end of the match to about 8 – 10 mph and was quartering slightly from the south as the sky clouded over once again. The course was set up on both sides of the two-track with six lanes on one side and six on the other, and were opposing each other.  With only about 20 yards in between lanes, it made the traverse very easy.

Next month’s match will be Saturday, January 20, 2018 here at BASF. Same times as always.

So until next month, everyone at Airgunners of Arizona wants to wish everyone in the Airgunning community a Very Merry Christmas and a prosperous and Happy New Year! 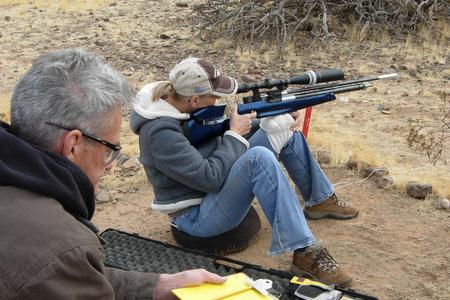 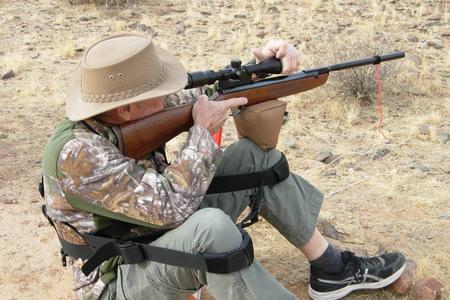 Allow me to start at the beginning.  It has been a while since we’ve shot at Ben Avery shooting range, so on the Tuesday before the match, Mike and I arrived about mid-morning to determine which lanes to use and to make sure we cleared vegetation along the sight-line to each target, set and leveled the concrete blocks, and made sure we had the right target (KZ sizes) documented to place in the right positions.  On the day before the match, Mike, Terry, Bobby and I set up the sight-in range, painted and set the targets, and made sure we were ready.  The Troyer factor was calculated to be 28.77; only moderate difficulty, but a Christmas present to the members attending.  We did not put the strings in place because the wild burros in the area (yes, this is the wild west) tend to “target” the targets.  They get vindictive by pooping on them if they are in their transit areas. 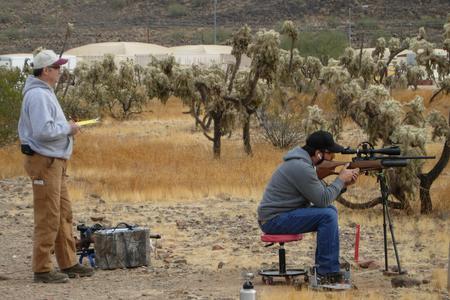 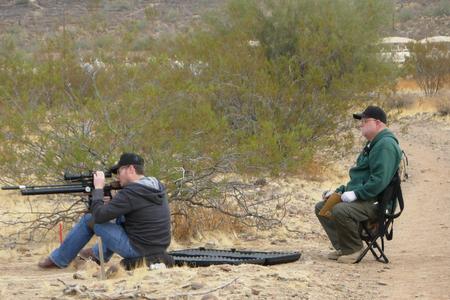 We contested 5 classes today; 6 shooters in Open PCP, 2 in Open Piston, 3 in Hunter PCP, 1 in WFTF, and 2 in Freestyle.  I would like to say that I had an idea of what was going on during the match, but I had not a clue.  Other than skipping around to take pictures of some of the guys while Wayne (my shooting partner) was setting up, I was monitoring the wind, the lighting conditions, trying to do my best (that wasn’t happening) and generally having a good time.  I did not know how any of the other shooters were doing until the scores were turned in.  Jeez, Louise, all of the shooters took advantage of our generosity and turned in phenomenal scores. 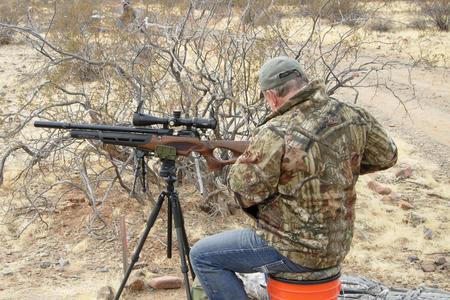 Mike (aka, the old man on his way to a perfect score 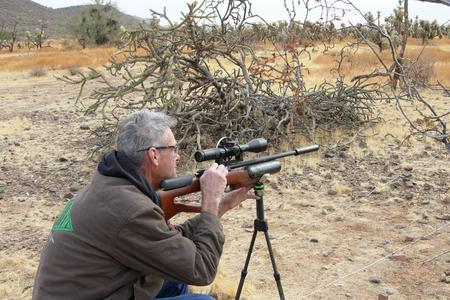 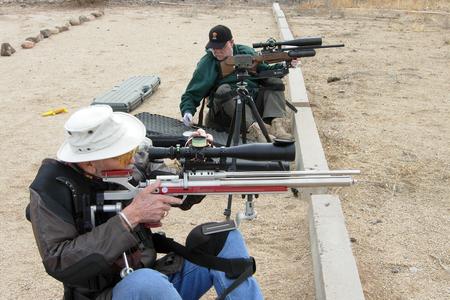 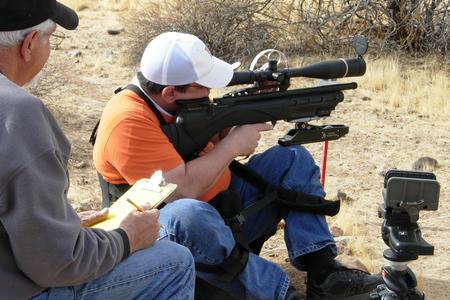 Robert Buchanan stopped by to check out the match, here chatting with Cole R. 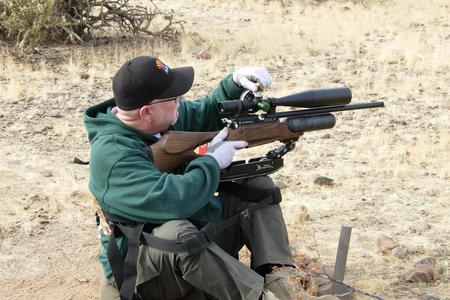 Dozens of hot-air balloons fill the skies near the range on most weekends. 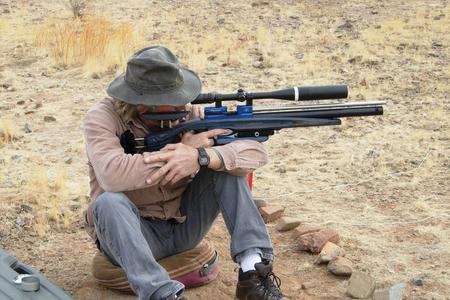 A one-inch KZ target was set somewhere between 40 and 45 yards.  Each set of shooters were to shoot 2 shots (one at-a-time) from a free position.  If still tied, we would have done the same thing kneeling, followed by standing.  If still tied we may have had to revert to leg wrestling.  Fortunately, that wasn’t the case.  What helped in that regard was that the wind picked up…..quite a bit. 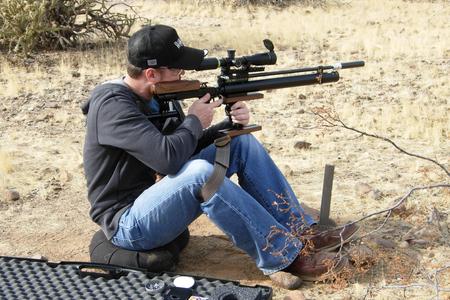 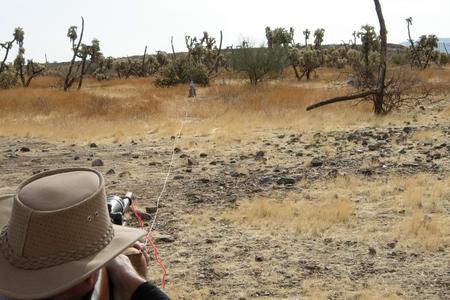 Why the above attempt at poetry?  Well, it turns out that Mike (aka, the old man) pulled off quite a feat and cleaned the course.  Yes, a perfect 48 out of 48.  And he was not the only one; Pat S did it also!  Imagine shooting a perfect score, only to be tied with your car pool buddy and end up in second place after the shoot-off.

The guys milling around just before the shoot

The Aqua blue targets really show up under most lighting conditions.  The darker "lumps" in foreground are the burro deposits