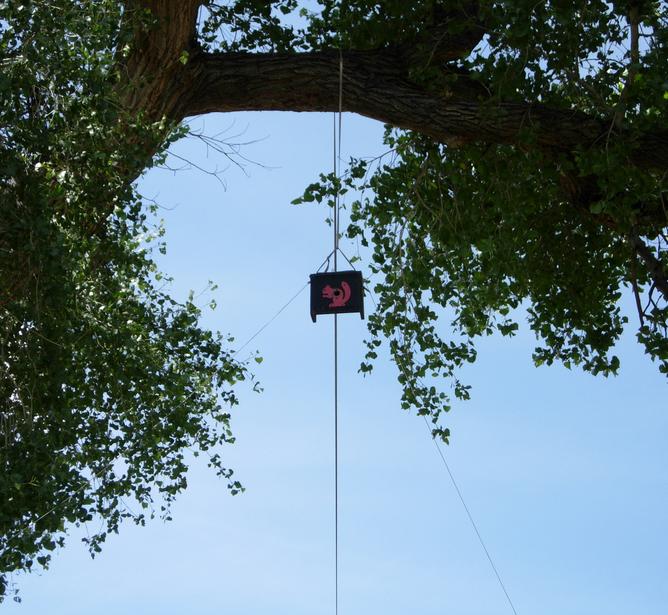 We also had several tables set up for an Airgun swap meet.  Not sure how much activity it produced, but there were some lookers.

Many thanks again to Bobby and Sandy for allowing us to invade their abode.  Thanks go to Bobby and Don for setting up the course.  Thanks to Larry and all others who helped with lunch.  Everything was delicious!

Next month we will be back up in the pines of northern Arizona at our Mormon Lake venue.  That date will be Saturday June 15 barring anything unforeseen, such as fire restrictions in the national forest.  With the amount of rain that we have had, this should not be a problem, but you never know and conditions do change.  We’ll keep you posted. 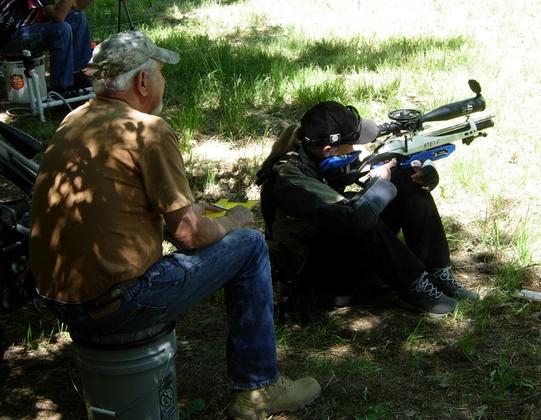 As you can see, Cole came through as Top Gun in open PCP class.  He is quietly sneaking up and cleaning everyone’s clock.  Bobby and Sandy tied for 2nd and in their ensuing shoot off, Bobby outshot his bride to garner 2nd with Sandy in 3rd.  Greg G. took top honors in Hunter class and Bill C won WFTF class.  I think that Pat was feeling a little lonesome in Freestyle as the only shooter there for this month.

We have to be careful who we squad together because of the back-and-forth banter that goes on.  Mike, “the old man”, and Lauren were paired together and some of that conversation had us in stitches laughing.  Mike will say something and Lauren isn’t one to back down to anyone, and has to respond.  Also, it seemed as if every time anyone hit the bell targets there would be a group cheer from all over the course.  The one bell target hanging in the tree has a nice, loud, clear DINGGGGGGG when it gets hit. 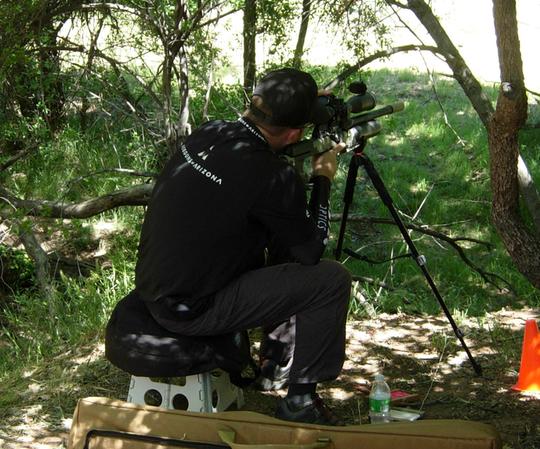 Great shot of Kent shooting with Pat scoring.  This shows how thick it is in places.

Mark Shooting with Pat scoring.....and talking to Mike at the same time. 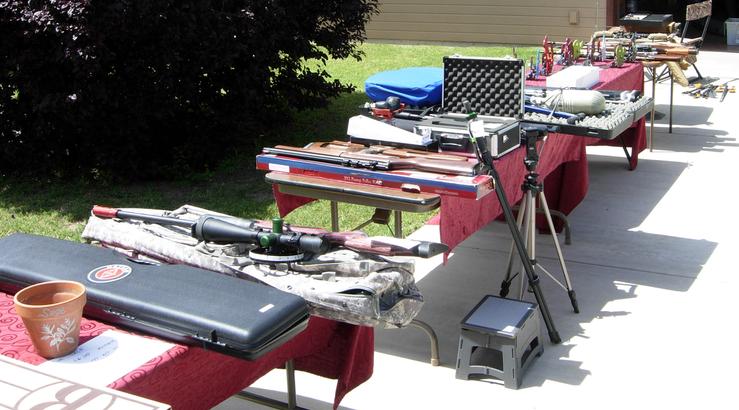 We had something else happen that is rarely noted.  A gila monster was spotted.  I was shooting the far target (47 yards) on lane 3.  The KZ was just visible above a fallen, curved branch that was back at about 30 yards and in my peripheral vision when viewing through the scope.  I had just finished knocking down the target the first time and was sighting on the target when I noticed movement off to the right on this fallen branch.  It was moving up and down about an inch at a time. Anyone who has seen lizards out here in the west refer to it as “doing push-ups” because that is what it resembles.

Well, it was not in my line of fire, so I released my second shot, knocked down the target and reset the string.  This string passed over the branch directly in front of whatever was there.  I re-sighted and adjusted my scope back to home in on this movement.  Sure enough, it was a Gila monster.  It had moved forward and was laying with its head ON the string.  I had only seen these twice in the past 30 years living here in AZ. 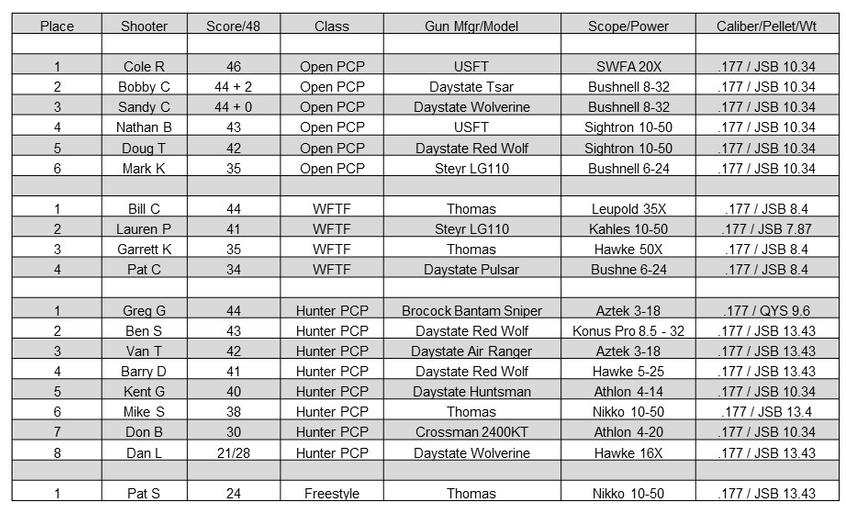 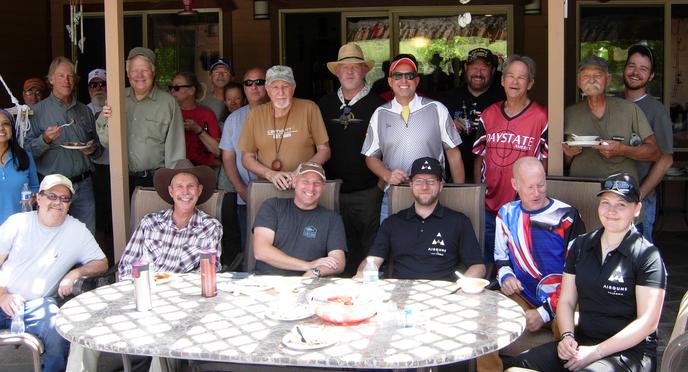 Yours truly hamming it up while Larry is trying to take an artistic photo.  Larry did take some great photos today. 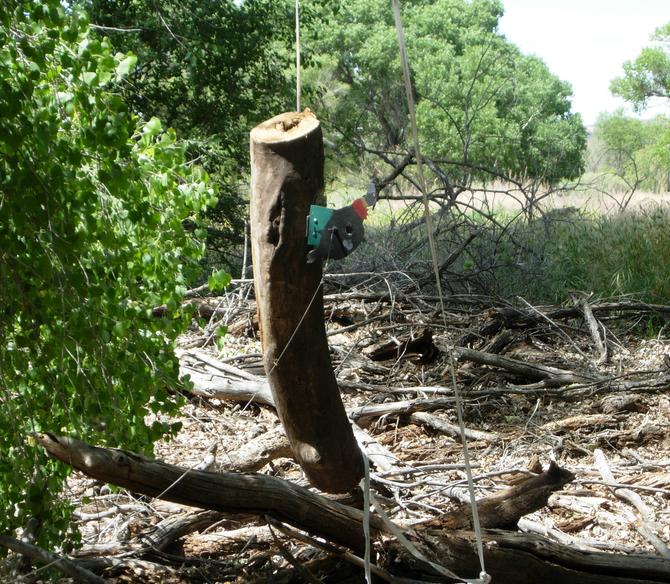 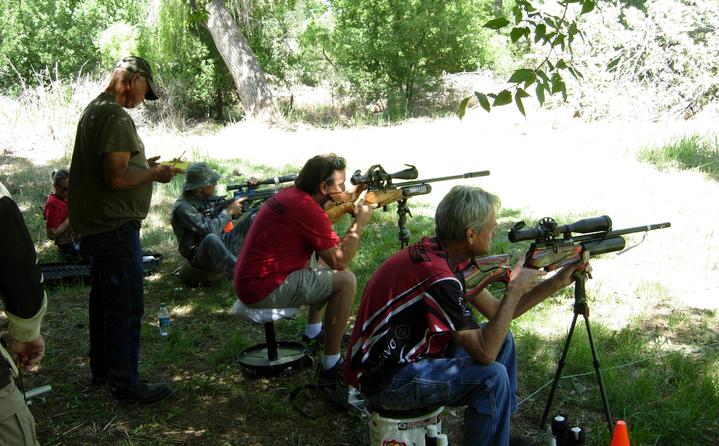 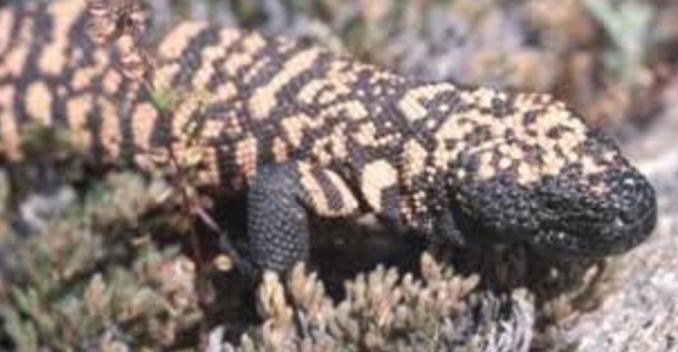 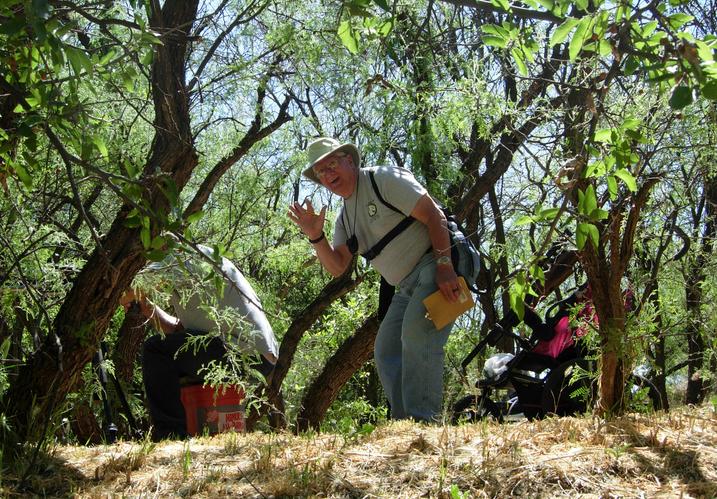 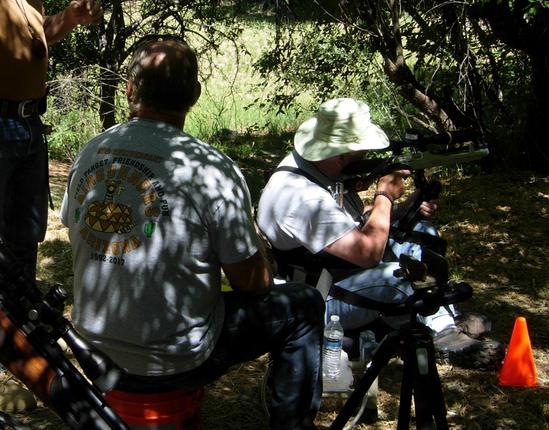 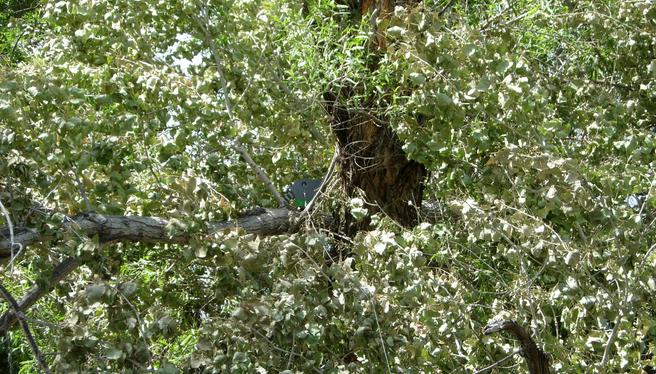 They wanted a tree mounted target at that location but didn't have an available tree, so they made one!

The bottom of that log is still about 4 feet off the ground in that position.  The fact that it is suspended from above, and subject to the wind makes resetting the target really interesting.

Internet image of a Gila Monster.  The light colored patches can be coral colored also.

There is a target sitting on the tree branch just left of center at about 20 yards.  The hanging target is at 28 yards and suspected from the branch above it and up about 20 feet.

I mentioned this immediately to the others nearby, and directed them where to look.  Lauren spotted it right away as did a few others near us.  We called a cold line to move forward to see if we could get a closer look, but the movement caused it to seek hidden shelter and we could not find it.  Seeing one like this in the wild is still a rare treat.

Speaking of treats, after the match we were the recipients of some of Larry S’s wonderful smoked brisket and pulled pork.  He said that his dad taught him how to smoke meets and this brisket took 14 hours.  It was wonderful!  There was also smoked gouda mac ‘n cheese (smoked while we were shooting), various salads, and other goodies, and Bobby’s home-made ice cream for dessert.  It was much easier get everyone to crowd around the table for a group photo than to “herd cats” and get them into position elsewhere for a shot.  The perfect ending for a perfect day of shooting. 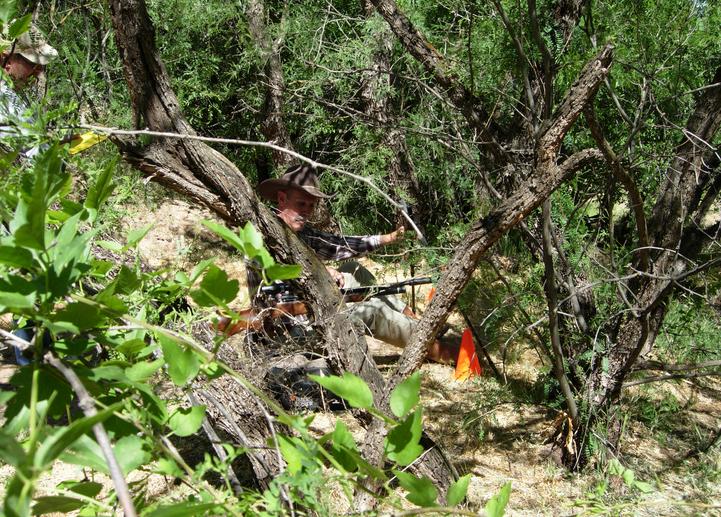 The target here is hidden in plain view, located just left of the tree trunk on top of the gray branch.

We had 19 shooters today, along with a bunch of spectators who are slowly getting bitten by the air gun bug.  Lauren and Greg joined us again from Airguns of Arizona, and Garrett and Van, from Phoenix Airgun club, attended as well.  We had one new shooter that shot for a short bit, but needed to leave early.  Dan borrowed a gun, shot for 7 lanes and scored 21/28 for 75%.  Not bad at all for just trying this game after contacting us initially this past week.

Ahhhhh!  Another beautiful day in air gun paradise.  We are back in Camp Verde again shooting our monthly match at Bobby’s place and lovin’ every minute of it!  The temps were in the mid 50’s during sight in and would get up to about 70 degrees by midafternoon.  We had brilliant sunshine in clear blue skies with some high wispy clouds here and there.  What we experienced under the canopy of trees was dappled sunshine.  The wind for the most part was dead calm, punctuated by breezes that shifted direction.  The wind, when noticed, was no more than about 8 mph with light gusts that came and departed just as quick.  It made for some marvelous shooting conditions.

Bobby and Don spent the better part of the past two weeks setting up the course and painting and placing targets.  We had 12 lanes with two targets per lane for a 48-shot match.  The target placements were interesting with some out in the open, others in the shadows and tucked into the vegetation, and then there were the bizarre placements. 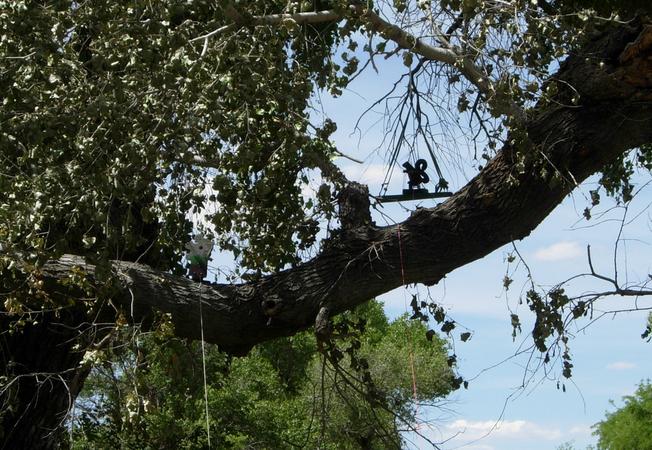 There were targets in the trees amongst the leaves, there were targets hanging midway up in the air, we had the hanging bell again after being modified a bit.  Bobby must have the arm of an NFL quarterback to launch whatever he used to get the string/rope/cable over the branches that far up in the trees.  We had one side mounted tree target that was attached to a piece of tree that was suspended from a tree branch above.  The guys didn’t have a suitable tree nearby for that lane, so they made one.  I have never seen anything like that before, and it was definitely novel!  With the info provided by Don, the Troyer factor was calculated to be 30.22 without wind.

Sandy and Bobby squadded next to each other.

Van is scoring for Bobby

Greg tearing it up in Hunter class 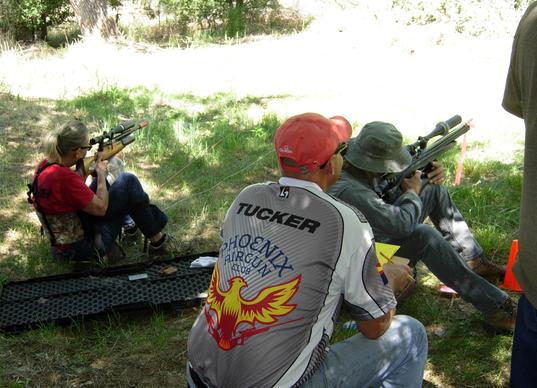 Mike and Lauren squadded together