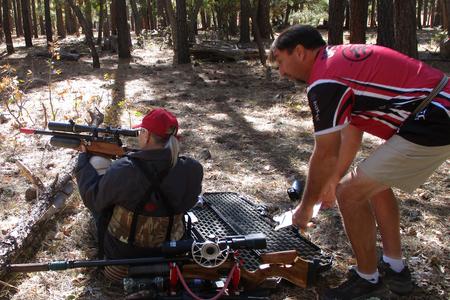 P.S.  No individual month’s match ever goes on without some little jab here or there.  This month’s episode just happened to get captured on film.  The area we lease from the USDA forestry department is also used for cattle grazing.  We know the cattle roam through the area because of the “deposits” left behind.  These are known by a few names, but “cow patties” and “organic frisbees” are a few of them.

Well, one of these dried up, dried out, but largely intact specimens found its way onto Steve’s bucket seat.  GAME ON!  The perpetrator was discovered and the favor returned at the end of the match when said patty was “discovered” on the front seat of his truck!  All in good fun considering Mike and Steve have been teasing each other for years.  Mike is still trying to shame Steve into shooting something other than Freestyle.  Who knows?  Maybe someday that will happen.  Until then, there is always next month…….. 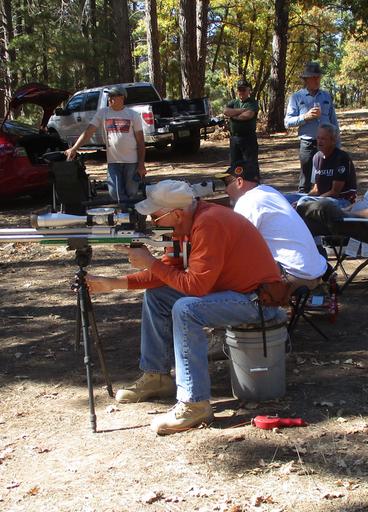 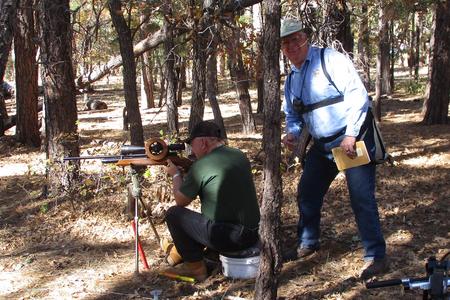 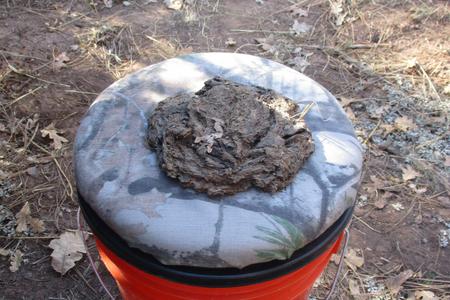 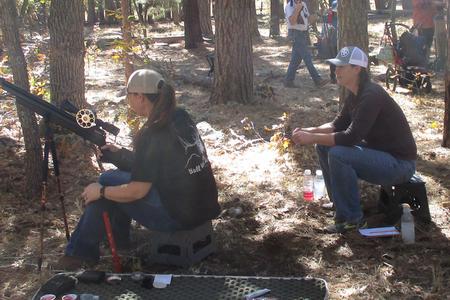 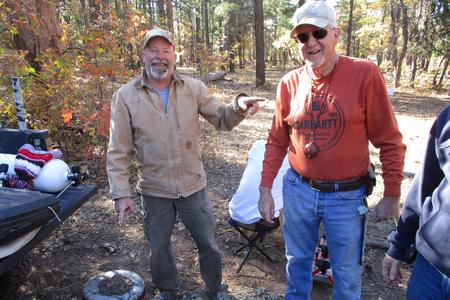 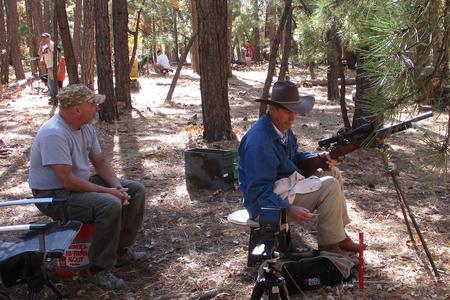 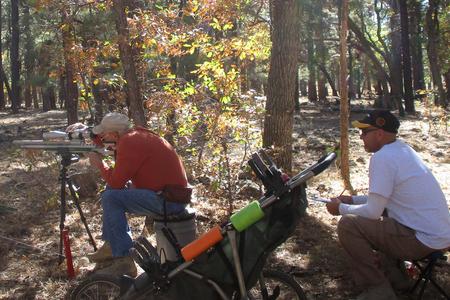 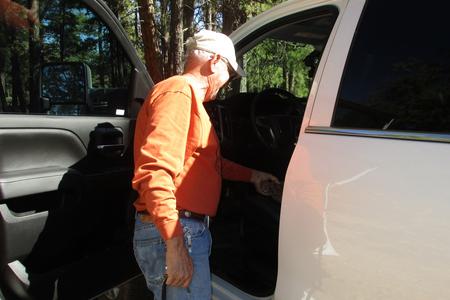 Robert Buchanan, one of the four founding fathers of Airgunners of Arizona, decided that he wanted to commemorate the anniversary date of the club each October, so he had the “Founders Cup Trophy”, a traveling trophy, commissioned and presented to the club back in October 2012.  Started in 1992, the club is now officially beginning its 29th year.

As stated earlier, this is the last Mormon Lake shoot for this season.  We move back to BASF in Phoenix until next May.  That being said, we need to recognize and thank Steve for storing and transporting targets back and forth from his home for the summer months and acting as match director.  We could have not done it without him.

Also want to thank Steve, Kent, Dan and Wayne for helping to set the course this month.  Thanks to all who helped pull targets afterwards, and a special thanks to Steve, Gene, Nathan and Mike, for helping to get all the targets back into the color-coded ammo cans, all the blocks, clamps, strings, and other paraphernalia loaded into the back of my little SUV.  I was able to get my own gear piled on top of all of that and it did ride solid on the trip home without blowing a strut.  A big thanks to Steve’s wife, Robin, for walking the course with us and taking pictures.  Only 16 shooters, but 87 pictures.  I cannot post them all, but she gave me enough to work with.  Thanks Robin!

We contested three classes this month with Bobby taking first in Open PCP class and Founder’s Cup winner.  Hunter PCP saw a three-way tie for first with Van, Mike, and Ben shooting multiple times at increasingly farther distances in the ensuing shoot-off, until Van prevailed for the win.  In Freestyle class, it was Steve, our match director for the win.  Second and third places were contested by Kent’s two daughters, with Lisa edging Crystal by a single digit.  The funny thing was that in practice late on Friday afternoon, Lisa’s 13-year-old daughter, Mia, was outshooting mom!  Turns out that Mia had also just finished her first hunt this year and harvested a 4 x 4 mule deer buck at 387 yards! That is some darn good shooting! Talking to grandad Kent, he is going to have his hands full putting together yet another Airgun and scope combo for her.  That will be another generation of airgunner in the family.

With club members either away on business, spending time with out-of-state family, or (several) traveling to CA to compete in their state championship, and with Covid-19 still looming, we were not sure how many to expect for this shoot.  As it turns out, we had 16 shooters in attendance to enjoy this month’s match.

Although the NWS forecast winds from 5 – 10 mph with gusts as high as 25 mph, we saw none of that.  Winds were mild, but present.  They would gradually build a bit, then just as gradually die off.  If you weren’t observant, you could easily get caught with your pellet landing somewhere other than where you wanted it to.  The mirage helped play a big part in “seeing” the wind.  It boiled straight up at times, and then shifted to sideways depending upon how strong the wind was blowing.

Again, not knowing how many or how few shooters we would have, we decided to only set up 10 lanes of 2 targets each for a 40-shot match.  Steve, Kent, Wayne, Dan, and Mark started about 12 noon on Friday to set the course.  It took them just a little over an hour to get everything set and in order.

To keep walking to a minimum, we positioned 5 lanes north to south through a stand of trees with the lanes facing west.  Lanes 6 through 10 were opposite this and facing east.  The two firing lines were only separated by about 20 yards.  Moving from lane 10 back over to lane 1 was only this short distance.  Also, Lane 8 was designated as the offhand lane and was easy to see why.  There was a mass of bushes that needed to be shot over to address the targets.

We did have our share of distant targets as well.  8 of the 20 targets were between 48 and 55 yards.  The rest were the in-between distances but set at the far end of the KZ limits.  With the sun and shadow, coupled with the mirage and wind subtleties, it made for a challenging course, albeit lots of fun to shoot. 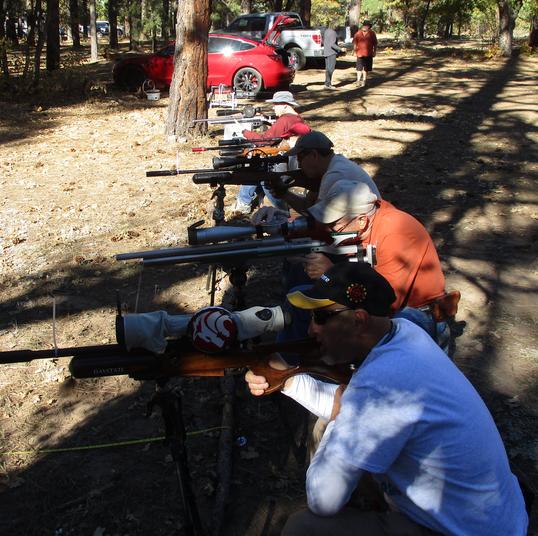 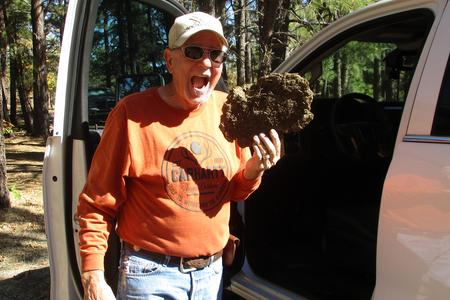 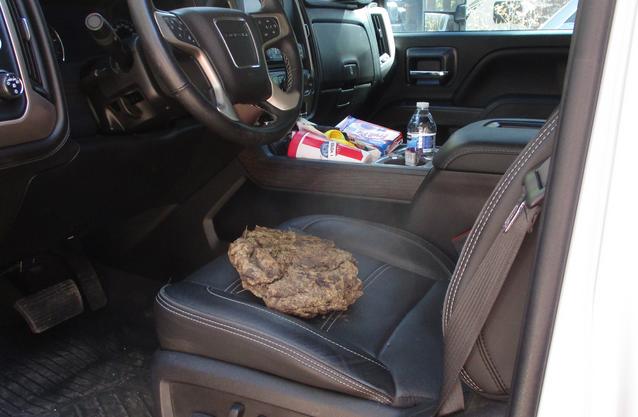 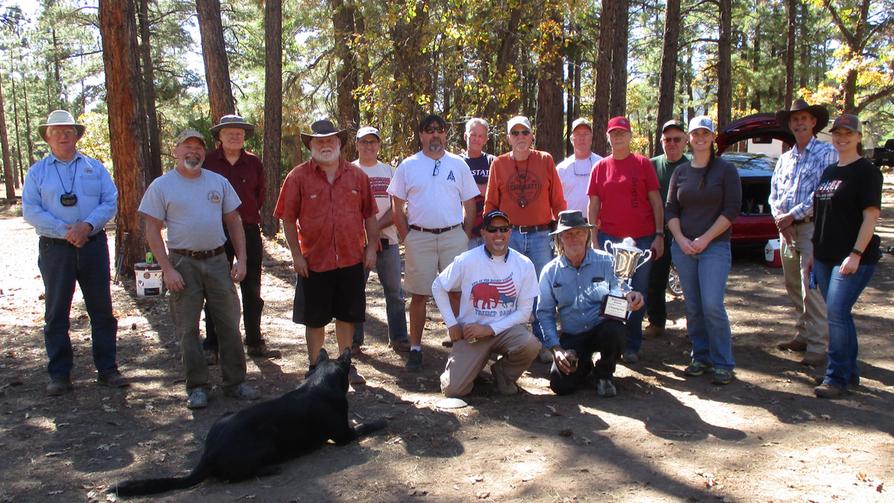 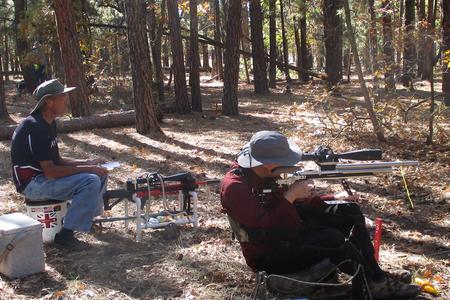 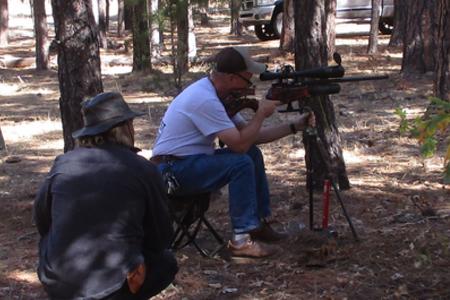 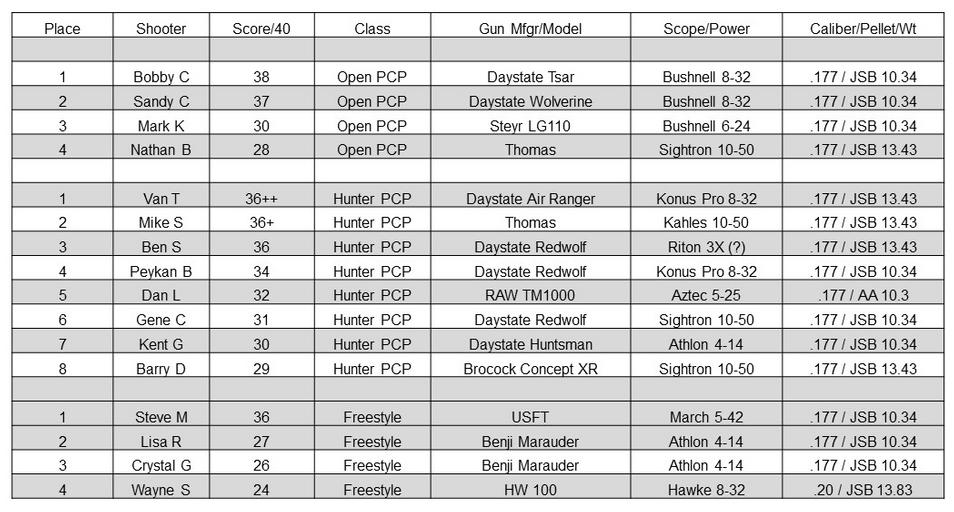 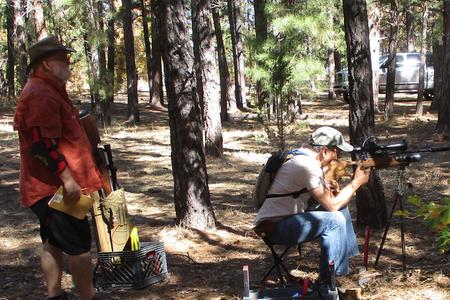 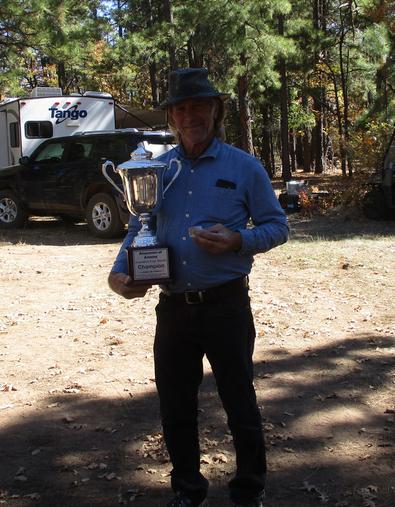 Mike and Van in shoot off.

Ben had already been eliminated.

Today was one of those perfect fall days; clear blue sky without a cloud in sight, bright sunshine, temps in the 40’s at the start of the match and warming into the low 70’s by the end of the match.  It was also our last scheduled match this season for Mormon Lake before we move back down to Ben Avery Shooting Facility in Phoenix for the winter months.  It is also our Founders Cup match.