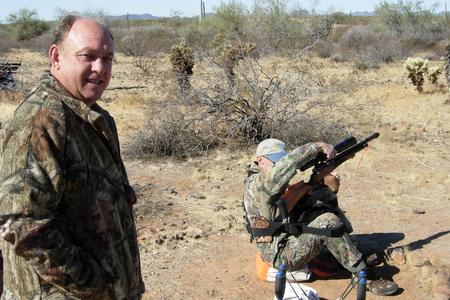 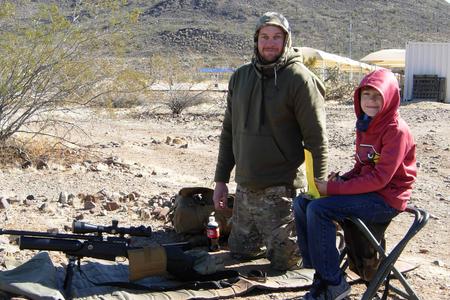 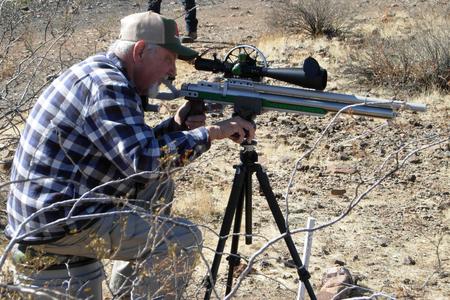 We had 10 lanes set up this month, with 2 targets per lane.  One lane was a designated forced position (offhand) and the course was designed to have a Troyer rating of 30.56.  With the wind, it ended up being 37.91 Troyer and was every bit of that, too.  Mike S helped set up the course on Friday, which took us only 45 minutes to accomplish.  Wayne R helped hook up and pull strings first thing on Saturday morning.  After the match, everyone helped pull targets with Bobby, Sandy, Ben, and Cole hanging around afterwards to put everything away until next month.  Thanks to all of these folks for helping to share the load.

Next month we will be back on our usual third Saturday schedule; March 17 at Ben Avery.

Freestyle (club) class had 5 shooters with Mike S taking top honors with a 38/40.  Mike chickened out of shooting Open class this month.  He still wants to try it at some point.  Doug T took second with a score of 35/40 and Pat S took third with 33/40.  Doug’s young son, Jace, shot a 28/40 using dad’s gun and was high junior for the match.  Jace can shoot and it is obvious that dad is a good coach. 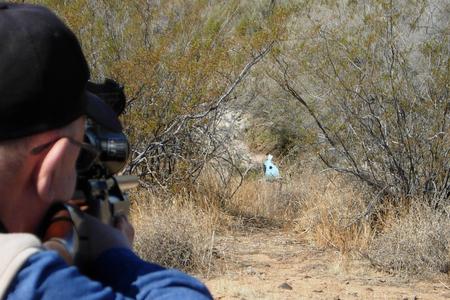 BRISK!  That is how to describe today’s match at Ben Avery range in Phoenix, AZ.  The NWS indicated that it would be sunny and 60 with light and variable winds picking up to about 5 mph in the afternoon.  I am beginning to think a witch doctor could give a better prediction especially when you plan a course in advance to try to match the weather conditions.  Don’t want to make them too easy and don’t want to make them too hard either.

It was 41 cool degrees when we arrived at the range under a cloudless sky.  The flags on top of the flagpoles at the AZGFD HQ building were whipping pretty good along with most of the trees and bushes dancing around to the wind.  The “Sunny” portion of the forecast was right as it was brilliantly bright.  It would warm up to 57 degrees by the end of the match, but the winds were really unpredictable.  Measured on my Caldwell wind meter, the winds were 7 to 9 mph at ground level, gusting as high as 14 mph, but shifting direction all over the place.  At one point during the match, the windicator on my gun was shifting around a 270 degree arc.  Wayne S., our club VP and my shooting partner for the day, just stood behind me and chuckled openly while stating, “Just for you, Mark.  Just for you”.  You should have heard the bitc….., er, voices of concern while the troops were on the sight in line prior to the match. 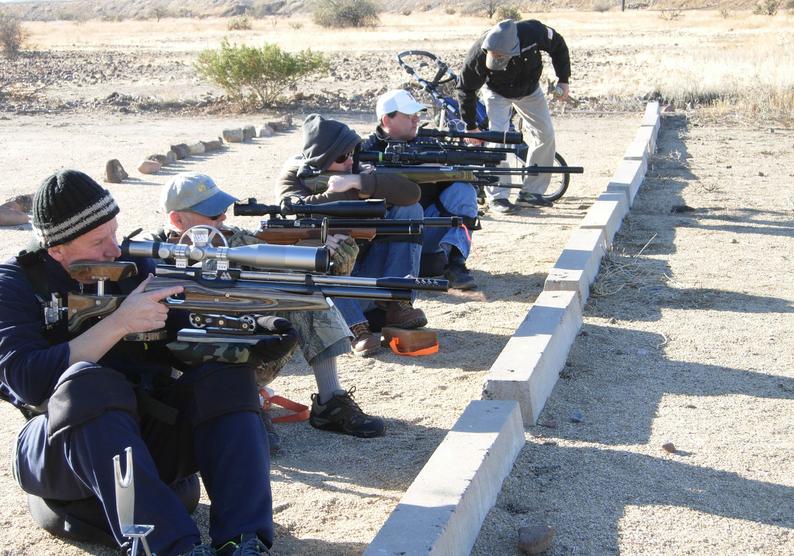 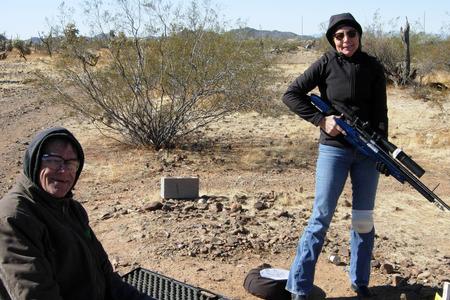 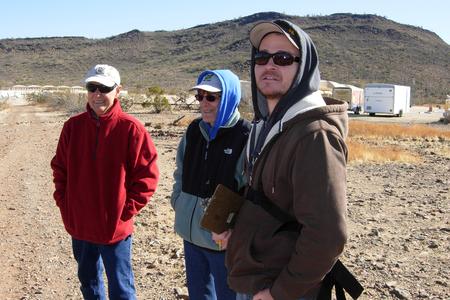 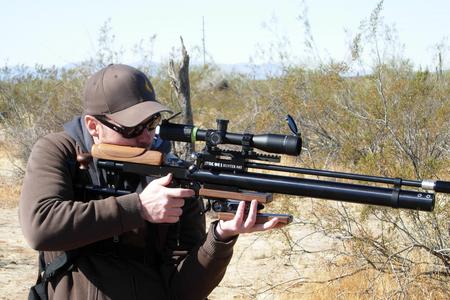 Cole taking one of his standing shots

Jace bundled up while dad (Doug) gets ready to shoot 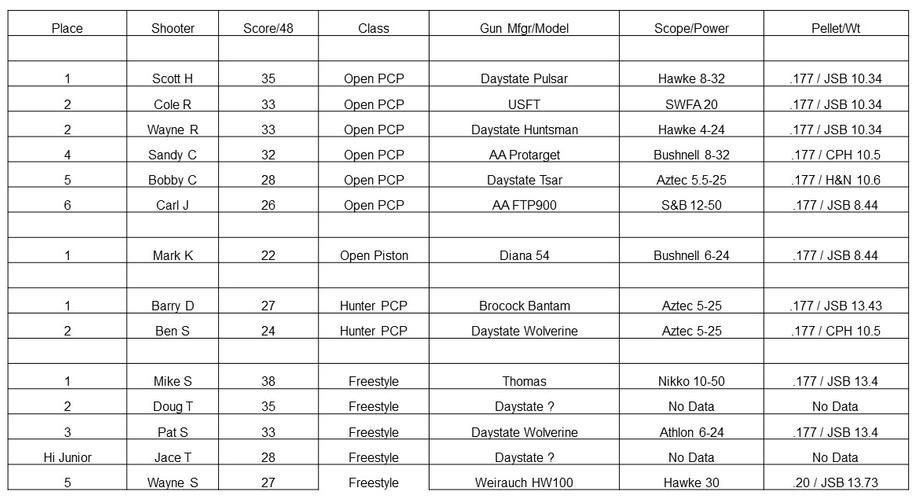 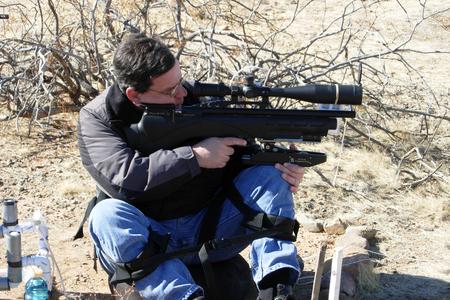 Brian and Beverly, chatting with Cole 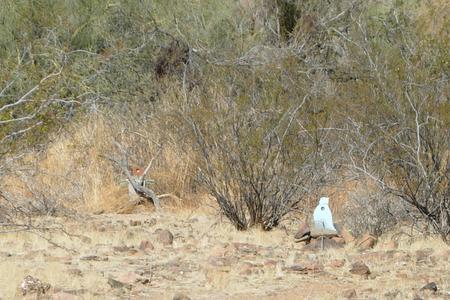 We had three classes competing today; Four if you count my solitary Open Piston appearance.  Scott H has been on a tear lately in Open PCP shooting a 35/40 for first place. Wayne R and Cole R both had a 33/40 to tie for second.  Sandy C was right behind with a 32/40.  In Hunter class, Barry D garnered first place with a 27/40 and Ben S took second with a 24/40.

Barry scoring, with Sandy getting ready to shoot, All bundled up.

Target placement with the terrain that we have available to us

Mike lining up a shot with his Thomas 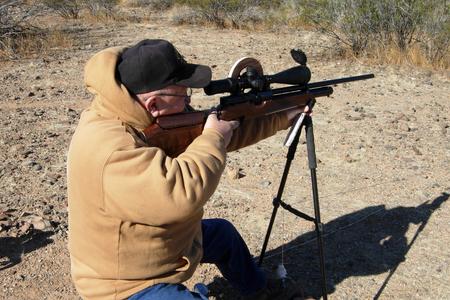 We had 14 shooters buffeted by the breeze today.  Our fearless leader, club prez Larry P made an appearance but was well under the weather and has been since his return from the SHOT Show.  He stayed for a bit, but ended up going home to recuperate as we headed out onto the course.  Brian and Beverly, from Oregon were in attendance, but declined to shoot this time, possibly due to the weather.  They headed out to view some early Cactus league spring training practice.