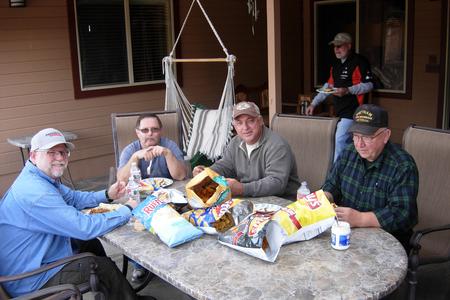 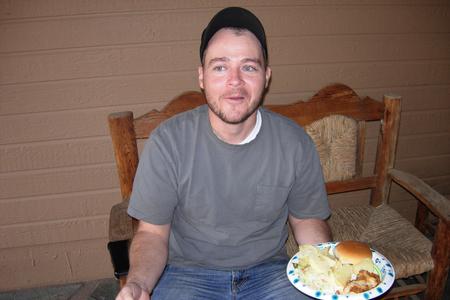 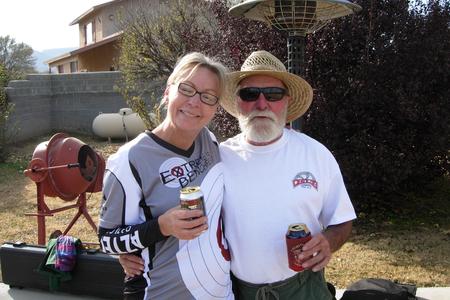 Boy, did this match start out chilly!  Bobby said that it was 29 degrees earlier in the morning, but when we started the match it warmed to the mid 40’s.  Fortunately, the sky was a clear blue with some high, wispy clouds, bright sunshine, and almost no wind.  As with last month, the winds were calm save for a slight breeze.  It would warm to the mid to high 60’s by the end of the match, but still made for a delightful setting.  During the match registration and sight in period, the fire pit was burning and most of the 25 participants were warming themselves amidst numerous group conversations.  Additionally, soaking up the sun felt pretty good as the morning progressed. 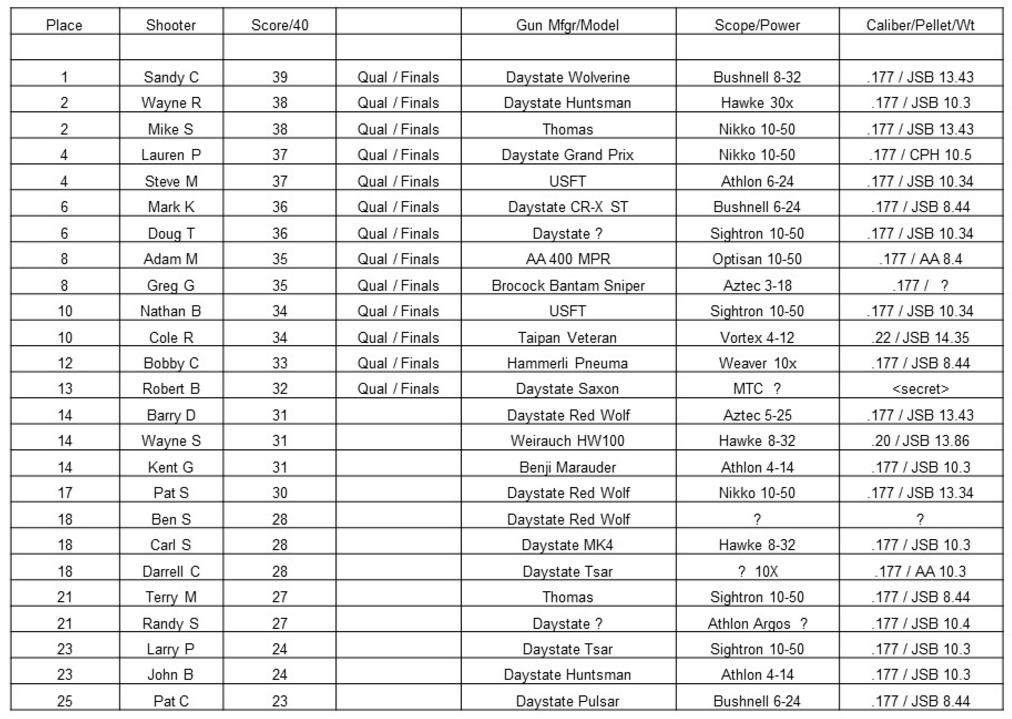 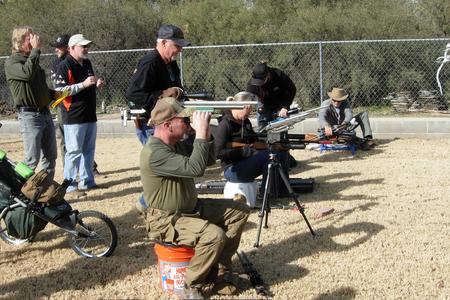 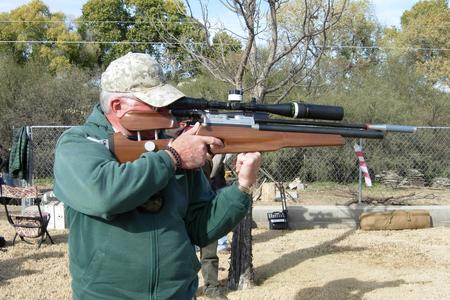 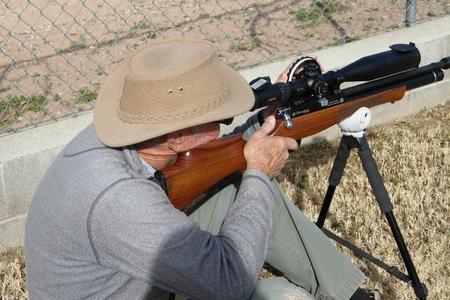 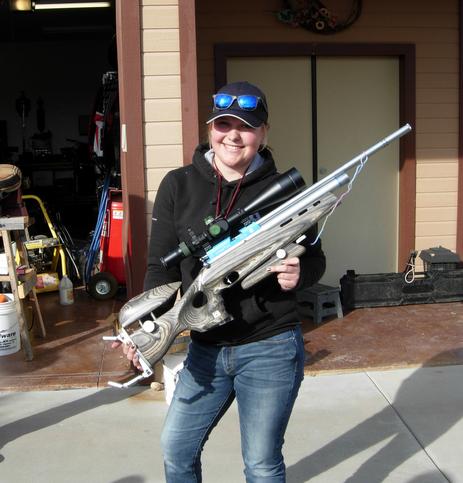 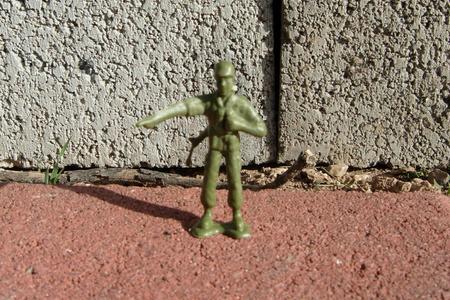 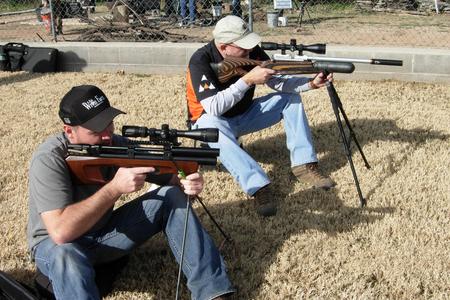 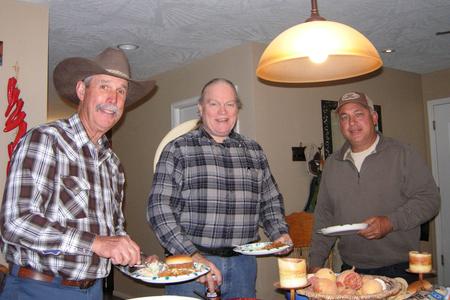 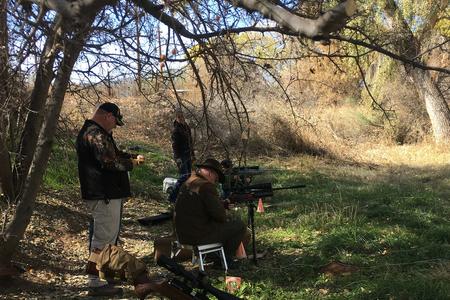 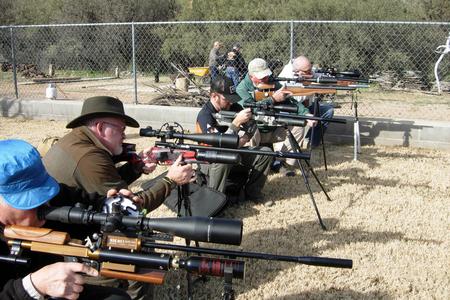 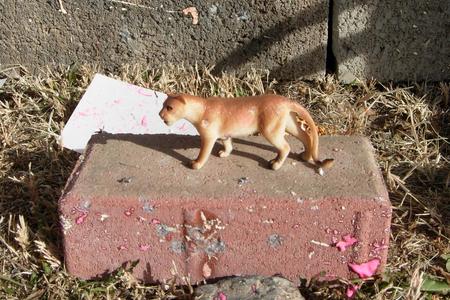 After lunch, Bobby awarded prizes to the top 5 finishers.  Bobby made up a bunch of spinner targets and the bell target.  Wayne made a wooden Bowie knife using 5 different kinds of wood.  Robert (from AOA) donated a vintage Crosman air rifle from his personal collection.  Thanks to these guys for their thoughtfulness and expertise.  Thanks especially to Bobby for not only dreaming up this match idea, but for also setting the course, providing the plinking targets, and running the match.  It is a lot of work, but greatly appreciated and we did have a lot of fun.  I also have to thank both Darrell and Larry for providing the photos used in this report. 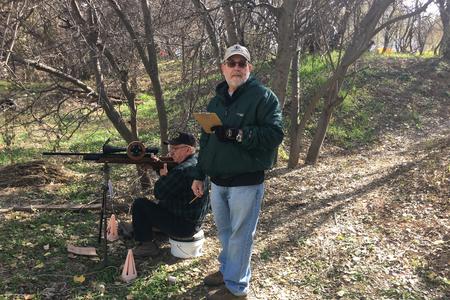 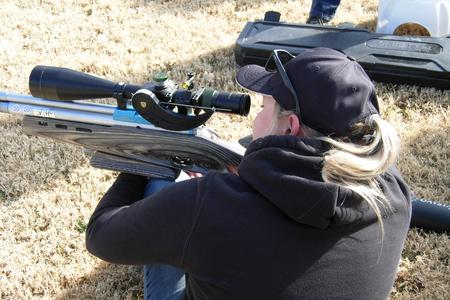 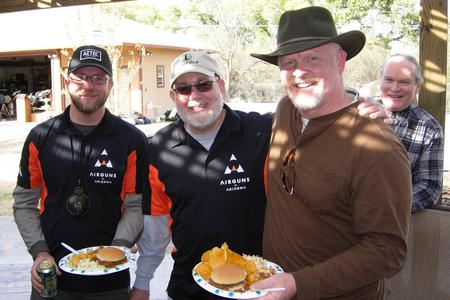 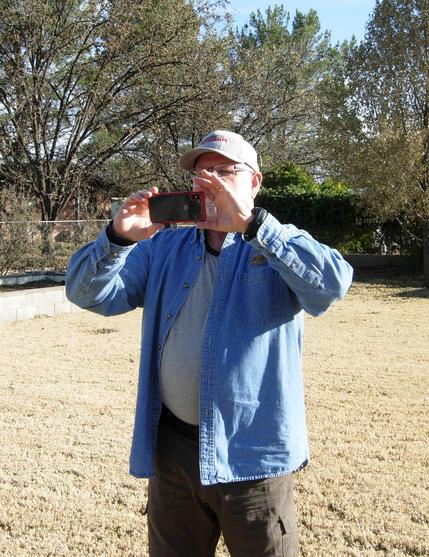 The shooters scoring 32 or above advanced to the finals.  Not sure how that was determined, but that is what was used.  Bobby also removed himself from the competition so that he could run the finals.  What a guy!  That left the top 12 shooters to duke it out.  For those of us that know Bobby, he is the ultimate plinker.  I think he would rather plink all day than shoot a match.  Put something out at any distance and he will try to hit it…..and usually does!

Here is where it gets interesting, especially since no on knew what was coming…. except that the yardages were unmarked save for the 20 yard line where we started.  Bobby just picked an arbitrary spot and that’s where we shot from.  We did shoot at two separate locations, one inside the fence and the other outside of the fence…. just to keep our range estimation off balance.  One shot.  Either hit and advance, or miss and pack up your gear. 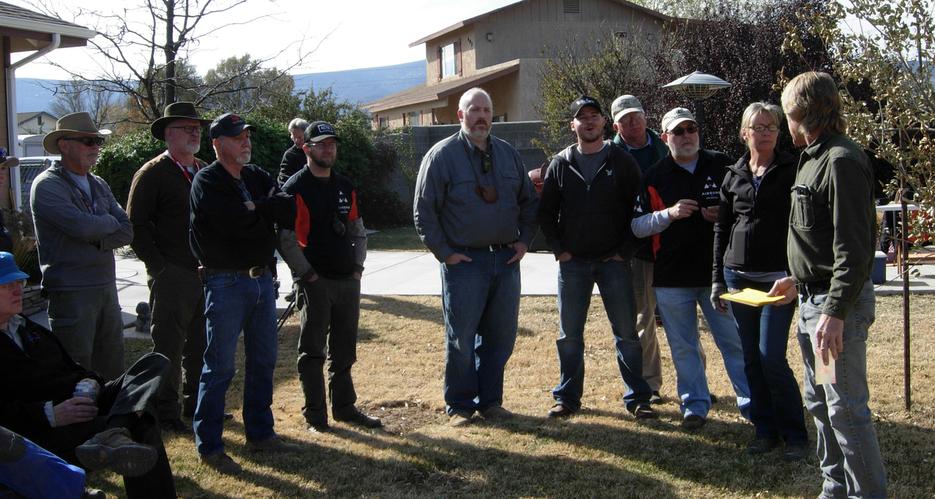 Bobby explaining the "Finals" format to the "Qualifiers" 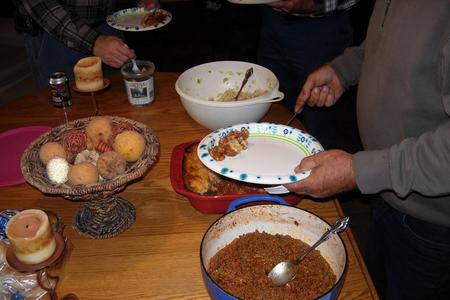 While all of this was going on, the peanut gallery was availing themselves to lunch.  Between Wayne and Sandy , we had sloppy joe’s, shepherds pie, coleslaw, and lot of chips and dip.  Randy also supplied a fair supply of barley pop from his place of employment.  When any of you get into Flagstaff, you have to eat at the Lumberyard!  I love their ribs!!!  Thanks to Sandy, Wayne, and Randy for providing lunch and beverages for us. 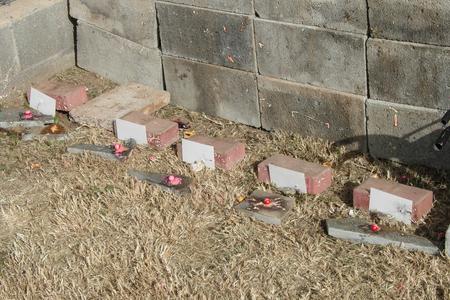 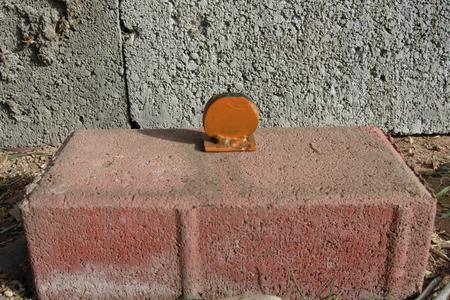 Bobby decided to have the match on his property again this month, but with a twist; there would be no classes and everyone would shoot the same with all scopes dialed down to 10x.  shooting sticks and buckets would be allowed and all range distances would be provided.  Nothing else; no harnesses, no rangefinders, no high magnification on the scopes, nothing.  This was going to be an experiment to see how well each shooter would do if all were using the same criteria.  He laid out the course with the smallest KZ being ¾” and having a 26.1 Troyer.  We used the normal AAFTA targets and shot 2 shots per target, with 2 targets per lane, for a 40-shot match.  This was just the beginning.  We would use the highest scores as a “qualifying” format in order to shoot a sudden death finals match, which was conducted immediately after the 40 shot initial match.  Bear with me as this will take some explanation, but first, here are the scores from the “Qualifier”; 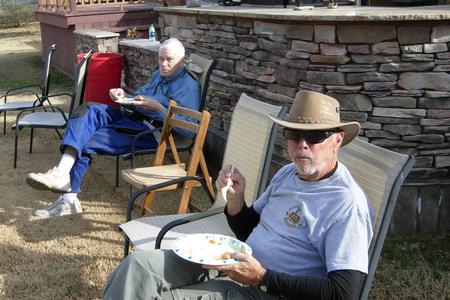 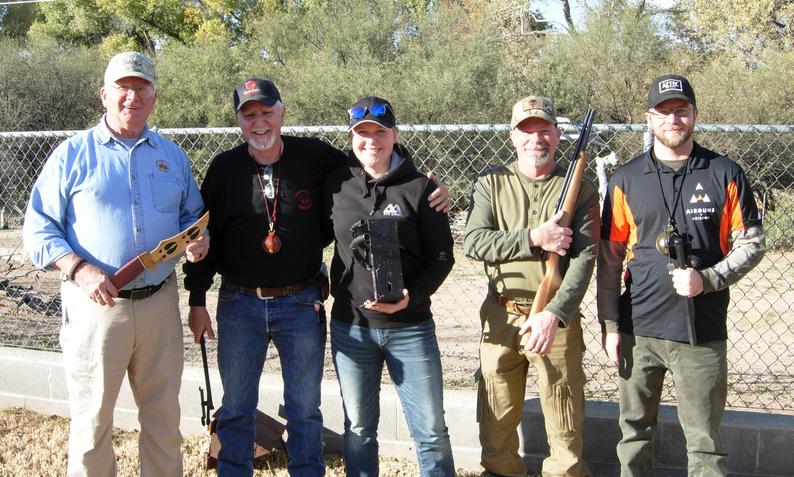 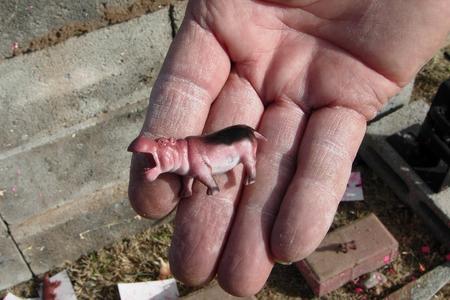 Stage One – paintballs at 20 yards.  We are still shooting with 10x scope magnification and these things are small, but all 12 of us nailed it.  The paint ball had to splatter onto a white index card backer to count.  On to stage Two.

Stage Two – Standing green army men at 25 yards.  We lose Sandy, Adam, and Nathan.  The rest of us had good hits so we advanced.

Stage Three – Shooting offhand at small safari animals at about 28 yards.  We lose Doug and Robert.  The rest of us hit our critters and were good to go.

Stage Four – One inch diameter steel discs at about 35 yards.  We lost Cole, but the remaining 6 of us connected.

Stage Five – Smaller Safari animals at about 33 yards.  Wayne missed his critter, but the remaining 5 connected.

Note that the peanut gallery was having a ball and heckling was encouraged.  Sandy can be really annoying when she wants to be….LOL!.....but all in good fun.

Stage Six – Kneeling green army men at about 37 yards – The 5 of us all hit so on to the next stage.

Stage Seven – ½” steel discs at about 41 yards.  Darn things are getting harder to even see with the naked eye.  We lose Greg and it is now down to 4.

Stage Eight - .60 cal paintballs at about 45 yards.  These also had to splatter onto the backer in order to count.  I missed!  Aaarrrggghhh!  Only 3 shooters left.

Stage Nine -  ¾” open ended bent tube at 45 yards.  Shooters had to put the pellet into the tube which curved behind a protective plate in order to hit a bell positioned behind the plate.  Lauren and Mike both made the shot, but Steve did not.  Now we’re down to two.

Stage Ten – Same distance but using the ½” open ended bent tube curved to aim at the bell.  Lauren went first and nailed it!  It has an obvious ring when it hits.  Mike was up next and when he shot, we heard…….nothing!

Lauren ends up winning the match to much applause and cheering!  Well, it looks as if old age and treachery were overcome this time by youth and skill……and better eyesight!  LOL.