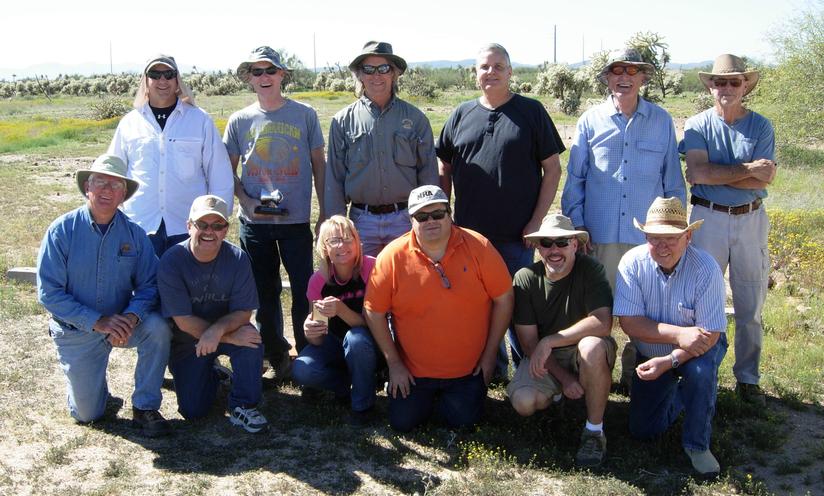 This is the view I was greeted with when we arrived on site today.......

After finishing shooting, collecting and putting away targets, awarding the class winners with their pins, posing for a group shot (fortunately, one of the archers was close enough and did the honors), some guys headed for home while the remaining 5 of us headed for BBQ at the Tennessee Grill just up the road.  Oh, LORDY, those ribs are good!

Our next match will be Saturday, March 19, same place, same times.  Come on out and enjoy the fun and we’ll see what other trouble we can get into.

Sorry, I am such a putz at times with a bad memory, but I totally forgot to thank AIRGUNS of ARIZONA for once again picking up the range fees at Ben Avery Shooting Range.  Robert and crew are committed to promoting air gunning, and as such they paid for the range fees again this month.  Thank you very much, and I apologize for the oversight.   Mark

I was paired up with Rick today and was glad to see him.  Due to his work schedule, he has not been able to attend in quite a while.  Rick, along with Bobby, JD, and me, were shooting our piston guns today.  I like shooting PCP, but piston guns are just so much fun to shoot.  I am shooting in open class, while Rick is shooting in hunter class and he is just hammering me with his score, nailing one target after another and leaving me in the dust.  He has his technique well developed using shooting sticks and sitting on a short stool.

Bobby sharing info with Rick on the sight in line just before the match.

We had shooters competing in five classes today.  Here are the scores: 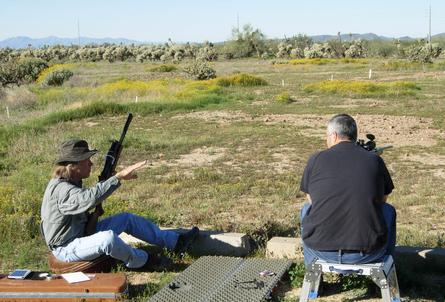 .......with this many cars, I thought we were going to have one heck of a match!

Turned out to be the archers.

Rick and I were walking back to the beginning of the course and passed where Wayne (the other Wayne) was shooting.  He looks up and says, “Did you see what some ass did to the target on lane 5?”  When I got to lane 5, I didn’t see any problem with the target, so called for a cold line in order to move forward.  When I got the target, I realized what he was talking about.

While all this was going on, the rest of the field of shooters were doing their thing, and from the laughter, must have been having a good time themselves.  Bill and “Inspector Callihan”, brought along Gary, another buddy of theirs from Las Vegas.  Gary clobbered Mr. C with his own gun while Bill clobbered all of us with the latest addition to his airsenal.  Both Eric and JD were shooting new guns this month with JD finally shooting for the first time.  JD attended the last two matches, but did not have his gun yet.  He shot today and had a ball.

Here is Bill shooting his latest gun, a new to him USFT, with JD scoring.  JD would also be shooting a new gun today and Bill would finish out as this month's match winner.

It is February.  It is the middle of winter.  This is Arizona and we are experiencing 80 degree temperatures and BRILLIANT sunshine.  For today’s match, it started out in the low 50’s but warmed nicely and the sky was cloudless, although a bit hazy.  The wind was nothing to speak of; maybe as much as 5 mph (+/-), but inconsistent and shifty.  One moment it was there, and the next, gone.  It would hit from the south and then shift around to come out of the east.  It played games with us all day long while we tried to figure out where to hold.  OK, now that the stage has been set and you guys have a mental picture of conditions here in AZ, I make no apologies about the weather.  We can shoot year round and love the daylights out of being able to do that.  While you may be shoveling snow, we shovel sunshine. 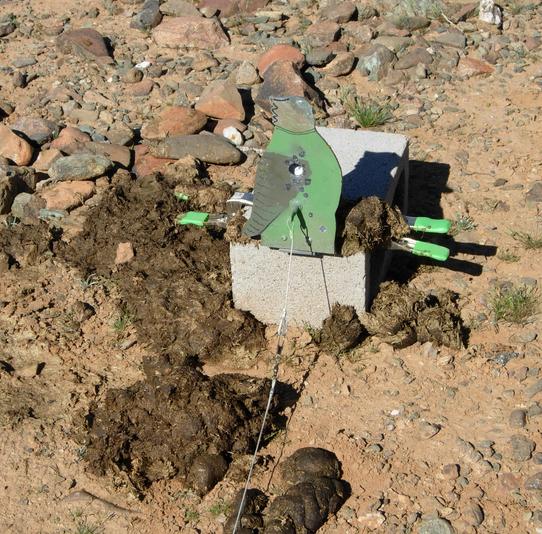 Sandy and Wayne were shooting on the lane behind us when it was Sandy’s turn to shoot.  Did I mention that Wayne shoots with a bucket and sticks?  He didn’t notice any problem.  Sandy. Who is tall and with long legs, gets into position and is having a heck of a time even finding the target.  After she finishes shooting….and missing….is when I started feeling these eyeballs jabbing me in the back of my neck.  I am familiar with the feeling, having been married three times.  “I thought you were gonna fix that?!?!” is what I heard from her.  Hey, challenges are challenges, and some happen inadvertently.  The next one we encountered seemed deliberate….. 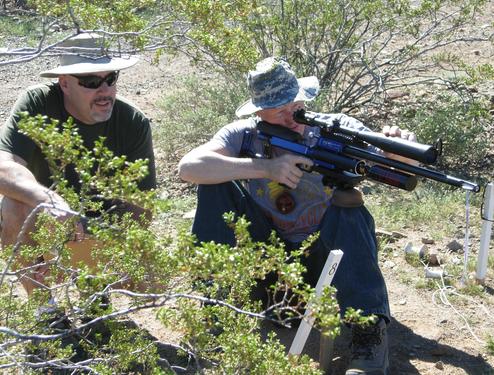 Eric (in orange) talking with the Las Vegas crew, Gary, Bill, and Pat, aka, Inspector Callihan, just before the match. 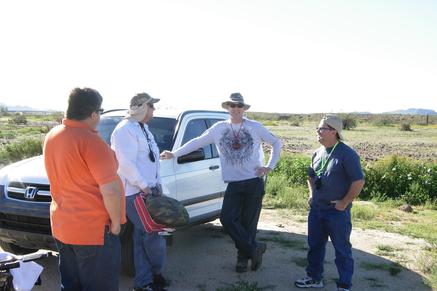 Twelve hearty souls gathered today to brave these terrible conditions.  We had 10 lanes situated in a sort of fishhook array; 8 lanes facing predominantly west, lane 9 was southwest and south, and lane 10 faced southeast.  We shot two targets per lane, near to far, for a 40 shot match, and having a Troyer factor of 32.36 without the wind. 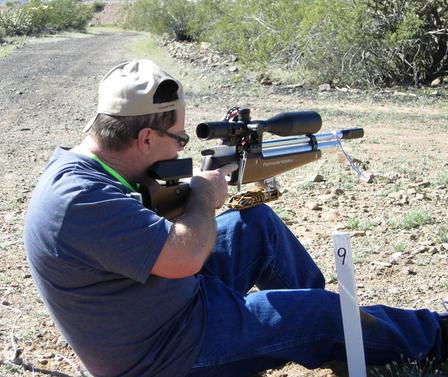 The area where we shoot has some wild burros that roam free.  We have been serenaded by them in the past, witnessed a mating ritual about 100 yards from our shooting positions in the past, but have not seen the burros recently.  Apparently, they visited us between the time we set the targets on Friday and when we shot them on Saturday.  The target on lane 5 took a direct hit from the southern end of a north bound burro.  I guess they don’t like the fact that we are invading their living area.  No matter, we make the best of every situation.  When you hit the paddle in the center, the target slams down with some force……with a splat…..sending the offending…”stuff”….flying to the sides.  Think of a self-cleaning oven, or something similar.  Yes, I will have to clean that before next month with a hose, some soap, re-lube it (the burros did a good job in the lube department) and maybe repaint it.  I will have to remember to position this target where Sandy can see it…LOL!  Maybe I will paint some….stuff….around the bottom of the target, complete with flies!  Hey, what can I say, we have fun at our shoots. 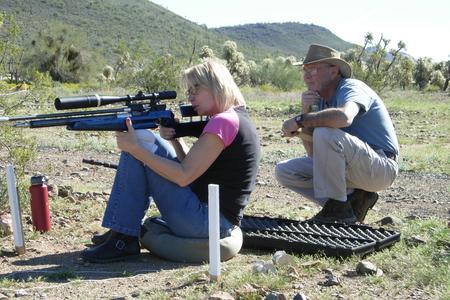 Here is Pat, aka Inspector Callahan on lane 9 shooting the near target to the southwest.  The far target will be to the south just off of his left shoulder

Eric posing while holding his new Brocock Compatto that he bought literally a few days prior to the match. 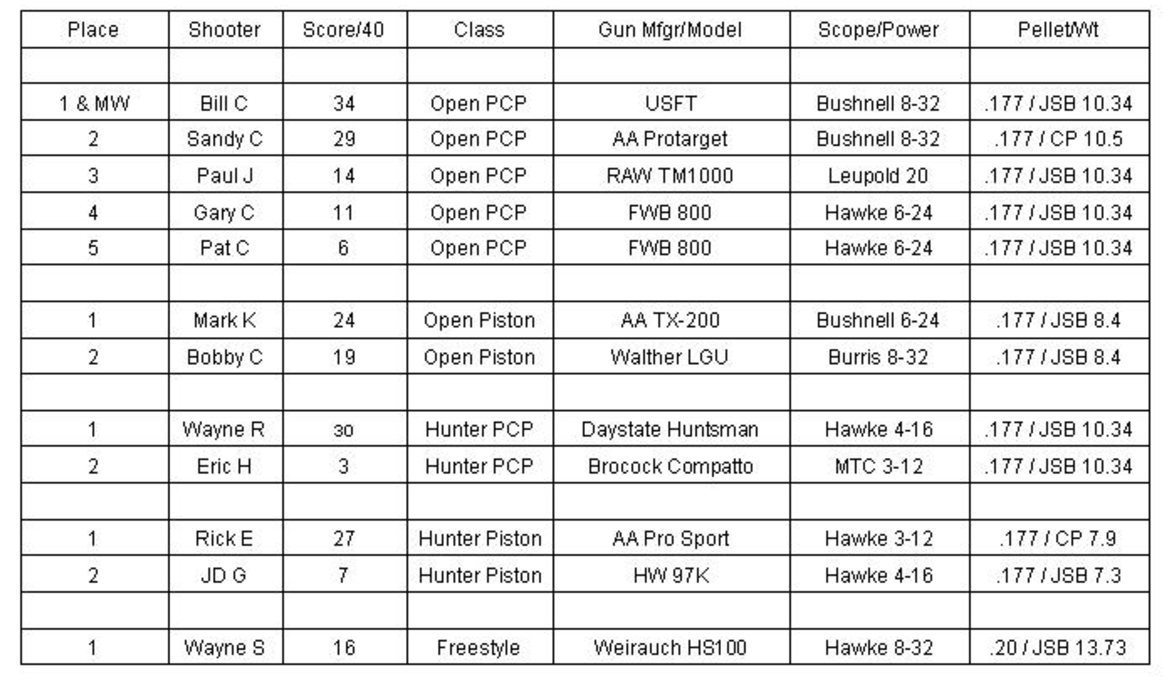 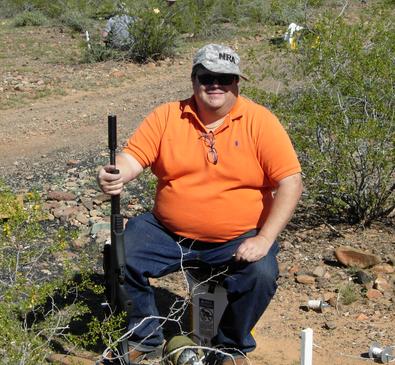 I had just finished clearing one lane (I only cleared ONE lane today) when I had this eerie feeling that something wasn’t quite right.  You know that feeling when the short hairs stand up on the back of your neck?  I got up, turned around, and found Sandy staring at me with both hands on her hips.  She started wagging her finger at me in a scolding manner, and I am thinking to myself, “What did I do wrong this time?”

Well, let me go back one month.  We had a target that could only be seen, due to a rise in the terrain between firing line and target, from the kneeling position.  We had announced no forced shots, but this one was unforeseen from the sitting position.  Sandy gave me some good natured grief because of my oversight (not unusual), but I made a mental note to correct it.  Fast forward to February and while Wayne, Wayne (yeah, we have two of them), Paul and I were setting up the course on Friday, we added another concrete block on top of the existing block to raise the offending target to where it could be seen.  We get this done and the question is asked, “How does it look?”  Well, it looks fine, this coming from three other guys who shoot using buckets and shooting sticks.  Of course it is going to look fine.

Match day.  We are shooting this particular lane, and Rick is shooting hunter class, sitting on a stool with shooting sticks.  No problem.  I shoot the near target and move to the far one, which happens to be the one in question.  From my vantage point, I scan to find the target and see a hunk of dark colored metal and a clear white kill zone, but nothing else.  The little rise in the earth stops just at the bottom of the kill zone, but covering the rest of the target.  I am thinking to myself that this is a pretty cool set up.  The pellet trajectory will clear the rise and then drop right into the kill zone.  Again, No problem.