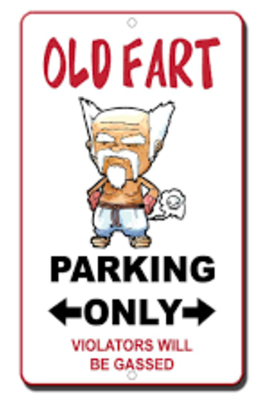 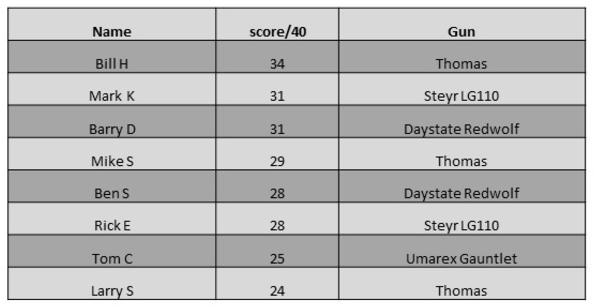 I did not shoot Miss Diana today.  It turns out that my favorite spring gun blew a piston seal.  Thought I had the situation corrected, but now she is going back into the shop.

Next match will be the last for April, next Tuesday the 30th.  C’mon out and join the merriment.

Week number 3 and we had 8 shooters today who lived up the title of “Old Fart”.  More on that in a bit.

The guys were waiting at the container when I arrived this morning and in no time all the needed gear was loaded and taken to the range.  Within 10 minutes, two of the group had the sight in targets set up while the rest of us set up the 5 lanes with 2 targets each.  Ten minutes!  We may be older but we work together like a well oiled machine…..or is that “Icy Hot” instead of oil?

We had patchy clouds on an otherwise blue sky with glaring sunshine.  That would change as the clouds rolled in and the 10% chance of rain actually materialized, but that was after we were finished.  The temps were comfortably in the 70’s and the wind was calm for the first half of the match.  We got the usual BASF “breezes” after that.

We had just started the match, and our senior representative got into his position on the firing line and oriented himself to the target……and then sat there.  He forgot to take his gun to the line with him!  The laughter that erupted was loud and long!  Ben showed consideration to his elders, fetched him his gun, and we proceeded from there……downhill.

With the usual chit chat of everyone shooting that close to each other, we have determined that we are not politically correct.  The jokes were offered and the laughter continued.  We were having fun!

One of the targets had the aluminum sacrificial pad shot off the paddle which resulted in an empty rivet hole through said paddle that could be clearly seen through the scope.  Mike knocked the target down on the first try but missed the second, claiming that he put his pellet through the hole!  We debated that for a few moments until we all called BS on that lame excuse.  More laughter.

Anyway, we shot through the first 5 lanes, then readjusted the target distances and shot the 5 lanes again for a 40-shot match.  After the first go-round the guys thought the targets may have been too close.  The second time around there wasn’t a single target under 30 yards.  One ambitiously set ¾” KZ target was set out at 38 yards!  A bit more un-PC discussion entailed.

Anyway, here are the scores for this week: