Here are some additional pictures of the venue we use at Ben Avery range....... 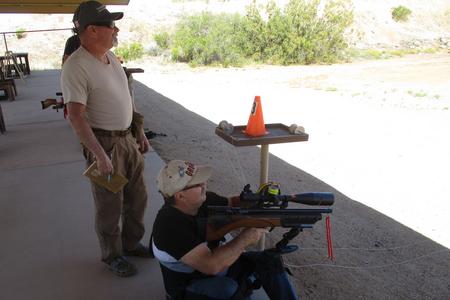 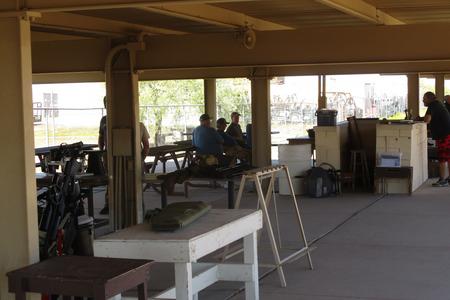 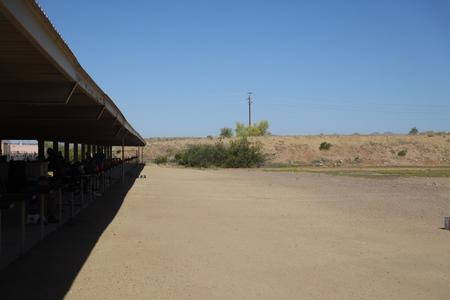 The firing line gives us plenty of shade or protection when it rains.

Just to the east of the pistol silhouette range is the range building for pistol, which also has restrooms with running water and flush toilets 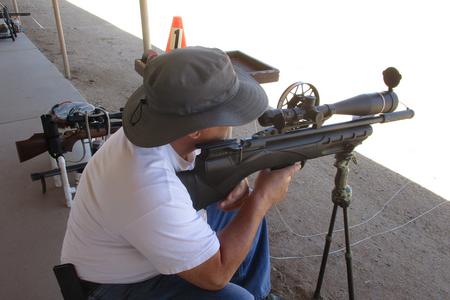 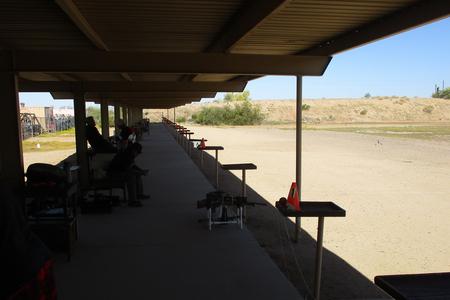 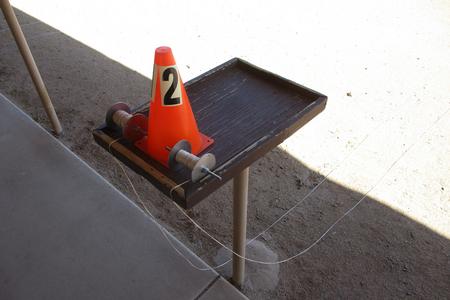 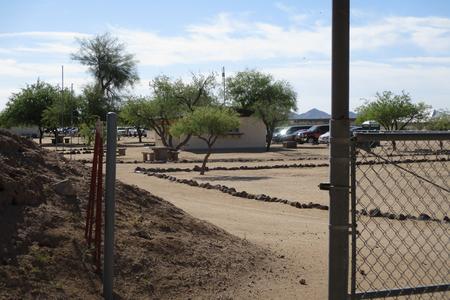 14 shooters converged today to do battle with the steel beasties under mostly clear skies, with bright sunshine.  What clouds were present were very high and wispy.  Upon arrival at the range, there were 14 hot air balloons just hanging lazily in the sky, enjoying the sunrise.  It looked to be the start of a glorious day for shooting, with the temps ranging from 73° up to 81°.

The NWS called for 5 to 10 mph winds out of the SE with gusts as high as 25 mph.  What we got was mild winds that were only in the area of 3 to 5 mph at the start of the match, and gradually increased to 5 to 8 mph, rising and falling, and then up to 10+ mph by the end of the match.  The challenge was created by the wind direction.  It started out of the south, then constantly shifted to SW, SSW, around to the West, then from the North, around to the South, then SE then SSW again, but never stopped shifting direction.

We set 12 lanes / 2 targets per / 48-shot match, with lane 1 designated as the standing lane.  With the wind constantly shifting, and with lane 1 next to the western berm, there was a constant swirling motion as the wind entered the range, hit the berm and kept moving around.  The pattern of pellet strikes on the faceplates showed just how erratic this was.

I can say that yours truly was on the lane with the ¾” KZ at 35 yards.  I shot my first shot and downed the target.  I no sooner set it back up, and a little bird flew up and landed on the target and just sat there!  We were chuckling at the absurdity, and, of course, I missed my next shot.  Oh, well……

We contested 4 classes today, with Hunter PCP the most populated. 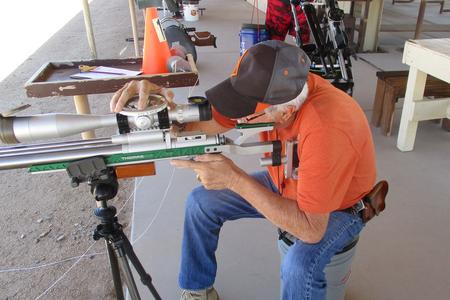 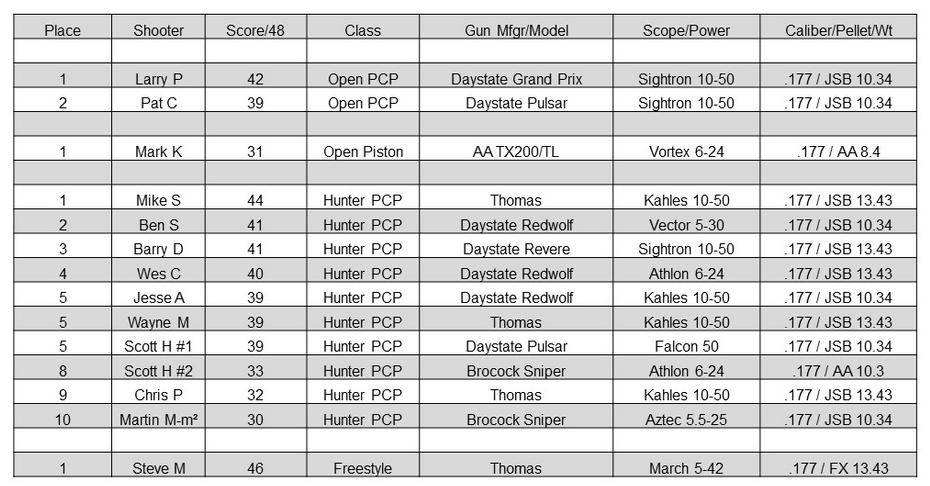 Directly behind the range is plenty of parking.  With all of this, what more could you ask for?

This is 4 shots pieced together to show the front of the firing line/canopy and then swinging around to the right (north) to show the extent of the range.  It is about 125 yards across the range. 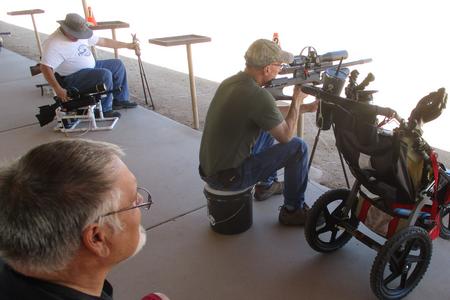 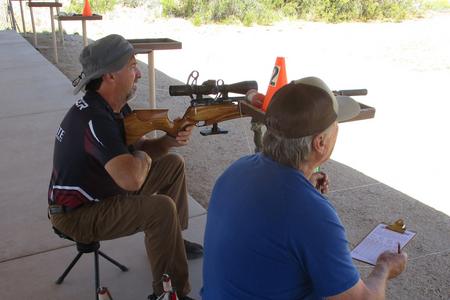 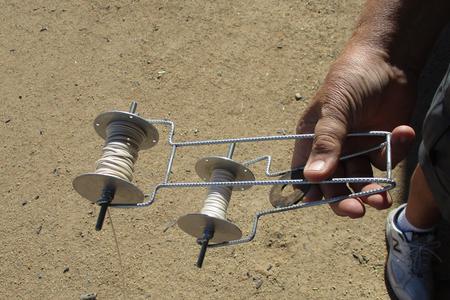 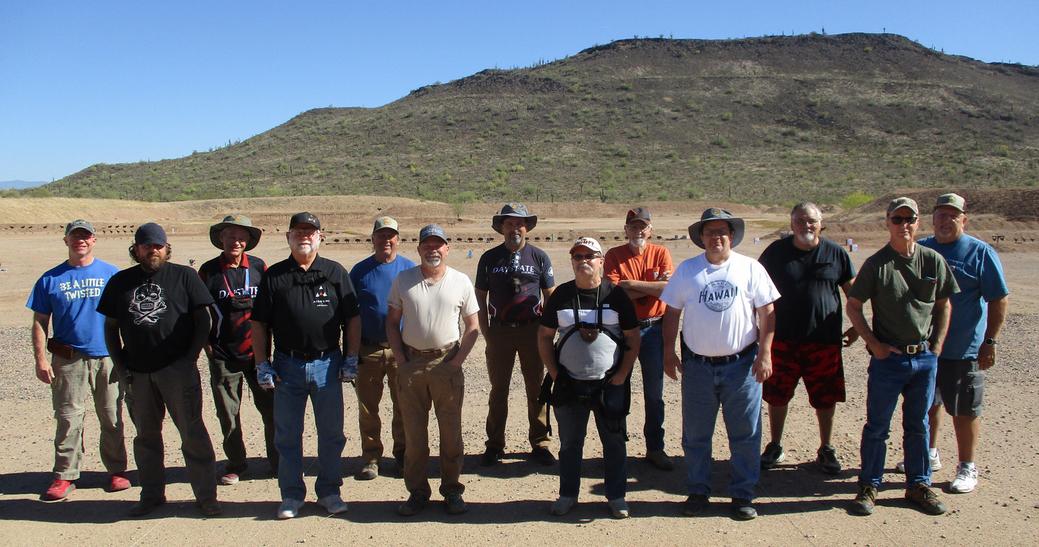 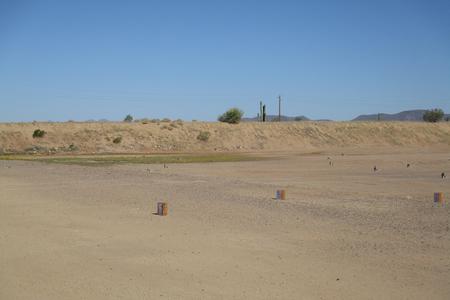 This is typical of the "lane trays" across the front of the firing line.  Obviously, these are for pistol silhouette, but we use then to place the orange lane marker cones, and position the reset string spools to keep them off the ground and somewhat clean.  The concrete pad keeps us clean, and dry when it rains.  We can literally shoot in any weather this way.

The range may be flat and somewhat featureless, but it works very well for us.  Easy to set up and tear down, and allows us more time for shooting instead of spending a lot of time setting up.

Just a few little hints of how we do things that might benefit other clubs.

Scott #1 shooting.  scorer is somewhere behind him

This is something one of our members, M², came up with to pull the target strings.  The strings, when clipped to the targets, can be pulled back to the firing line without tearing up your fingers.  Two of our other members, Wayne and Mike, reworked the target string holders to allow for a threaded rod to extend each side of the spool.  When winding them up afterwards, we just insert them into a cordless drill.  Real easy to deploy and retract the target strings, which is otherwise a real PITA.  Great job, guys!

After the match, we left the targets in place in order to make a determination on what the Troyer factor was.  Most seemed to think that the course was a bit more difficult this time.  Turns out the Troyer was 39.95!  Yeah, a bit challenging……but fun.

As always, we want to thank all who helped to set up and tear down afterwards.  It only took 20 minutes with so many hands helping to set up.  It took less than that to tear down.  We are grateful that everyone pitches in to get the job done, and we are appreciative of that.  Thanks, Guys!

And from all of us at Airgunners of Arizona, to the entire airgunning community, Happy Easter! 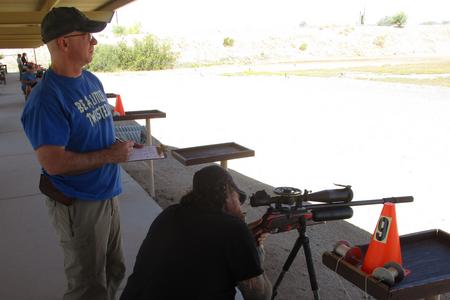 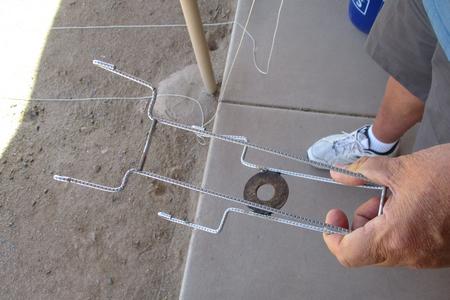 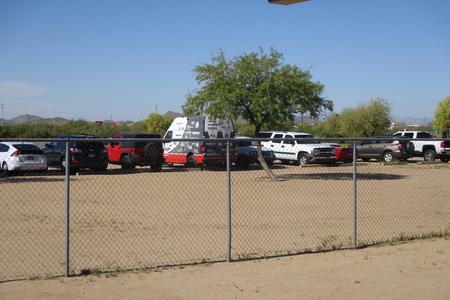 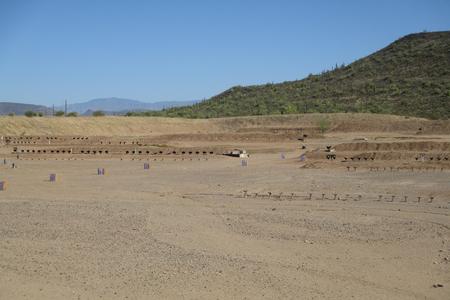 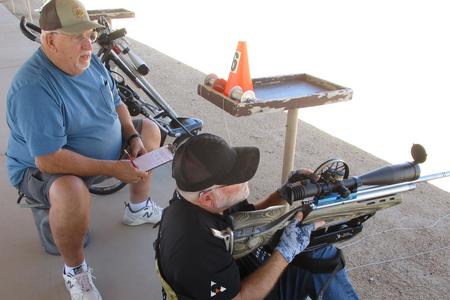 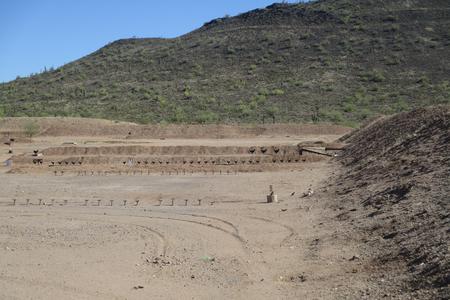