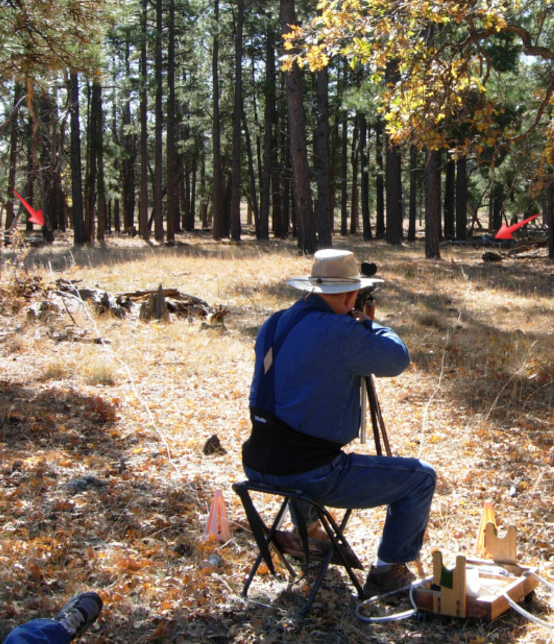 Next month we will once again host matches at our “winter range” at Ben Avery Shooting Facility in Phoenix.  Whereas we have a mountain setting with Ponderosa pines and cool temps at Mormon Lake for the summer months, we also have a wonderful Sonoran Desert setting complete with all kinds of cactus, beautiful vistas and perfect temps at BASF in Phoenix during the winter months.  What more could you ask for?

Terry scoring while Sandy is shooting.

Target cannot be seen at this angle.

Bobby with the Founder's Cup trophy and the monthly match winners traveling trophy.

Open class was the heaviest populated with 10 shooters.  Bobby C and yours truly were not only squadded together (random draw), but tied for high score with 36 each.  That tie was broken by counting the consecutive number of “X’s”, as the match director did not want to set up a shoot off scenario.  Bobby won with 23 X’s to my 22 X’s.  Sandy took third place with 34, and Steve close behind with 33.

It turned out to be a great day with everyone enjoying each other’s company.  We have to thank Steve, Don, Cole, and Pat for setting up the course.  Wayne took care of registration.  Amy took care of the photographic duties.  There were 9 guys that dove in after the match and had the course down and targets gathered in record time.  Of course, Larry was busy afterwards filling up air cylinders at the PAD van.  We are blessed to have so many club members who unselfishly chip in and do what is necessary without being asked.  I would like to think that most other clubs are so fortunate.  Thank you to all of them.

These I remember because the wind was coming in from the left at a constant (SWAG) 7 mph.

Steve, our match director, was on site early the day before the match, and along with Don, Cole, and Pat, set up 10 lanes using some of the smaller KZ targets at longer distances.  He has a penchant for doing things like that, and was probably snickering the entire time during set up.  He is quiet but has a devious and well-developed sense of humor.  Because we have an infinite choice of direction, the course was set up to run the length of where we normally position the sight-in range, with the 10 lanes facing a southwesterly direction with the firing line running from north to south.  This had the shooters sitting in the open with their backs to the sun “to help them keep warm”, or so I heard. 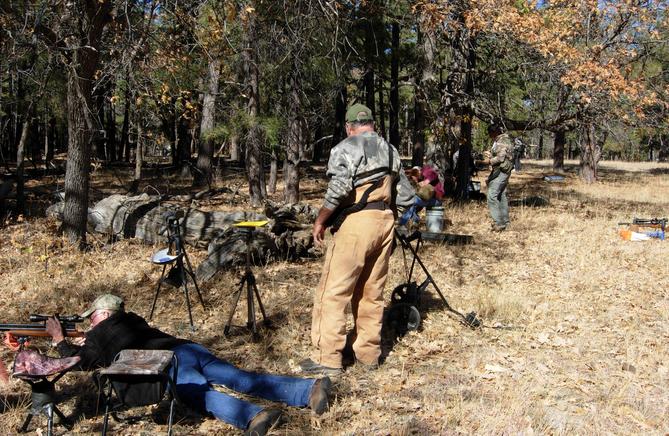 A view looking back along the firing line with Mike and John in the foreground.

You can see how bright it is here, but how dark it is futher into the forest. 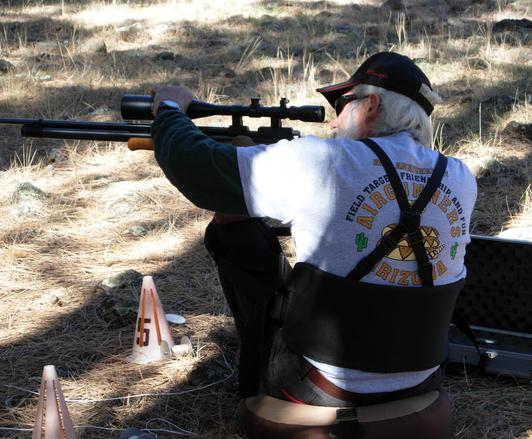 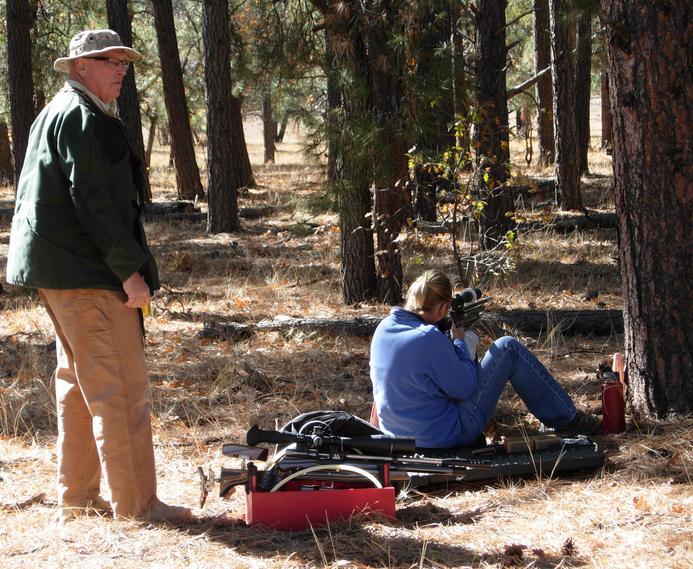 WFTF class saw Bill and Terry battling each other with Bill emerging on top with a 33 to Terry’s 26.  That was definitely a tough course for those two guys shooting  12 fpe air rifles.

Hunter PCP turned out to be a tight race with two shooters competing.  Ben held on to score a 26 to Don’s 25.  They were squadded on adjacent lanes and am not sure if they were keeping track of each other.In Freestyle, we had 5 shooters this month.  Cole was the runaway winner with a 34 for first place.  Wayne and Mike were tied with 29 each and the same criteria was used to break that tie.  Wayne took second with 8 consecutive “X’s” and Mike took third with 6 “X’s”.  The other two guys in the class were close behind. 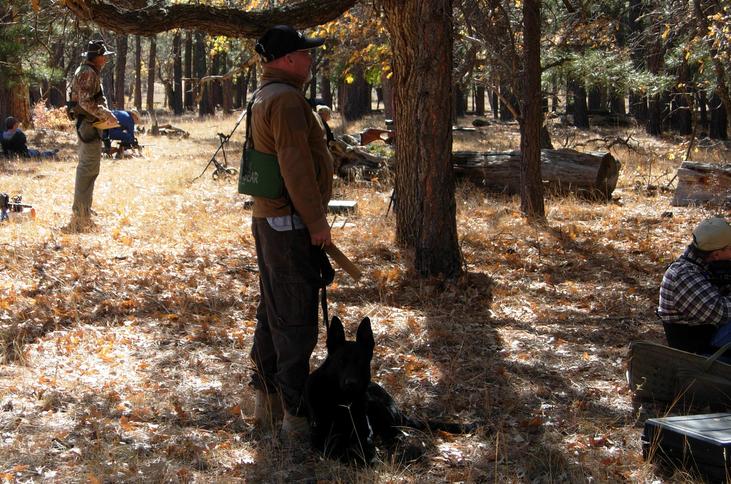 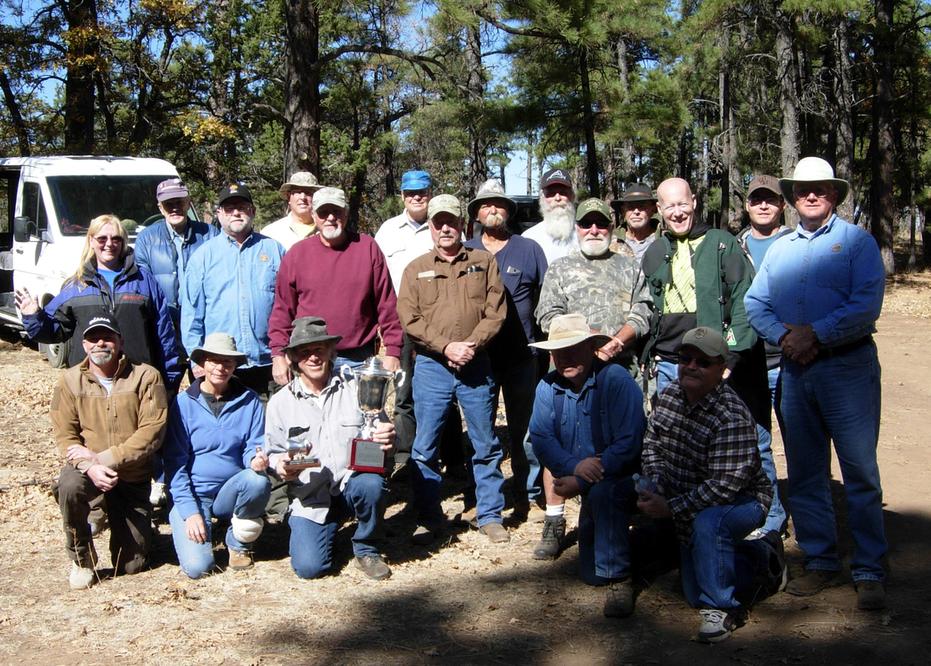 Mike getting himself situated to take a shot

Well, the last match of the season at the Mormon Lake venue saw 19 shooters compete for the Airgunners of Arizona Founder’s Cup.  Fortunately, the wind that was evident during set up on Friday did not make an appearance on Saturday.  It was blowing in excess of 25 mph and could have made things quite frustrating.  It was also a tad chilly as well.  The temps were down in the upper 30’s to low 40’s as the sun came up on Saturday morning and heavy frost was on the windshield.  The sun did warm things up quickly and the skies were clear with nary a cloud to be found.  What wind did come up only accounted to about 3 to 7 mph, coming in on an oblique angle, and temps rose to the mid to upper 60’s.  It turned out to be another nice day in air gun heaven. 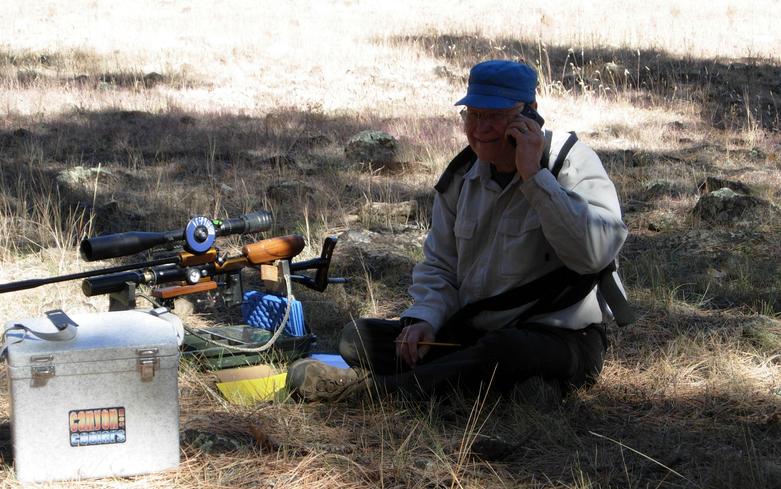 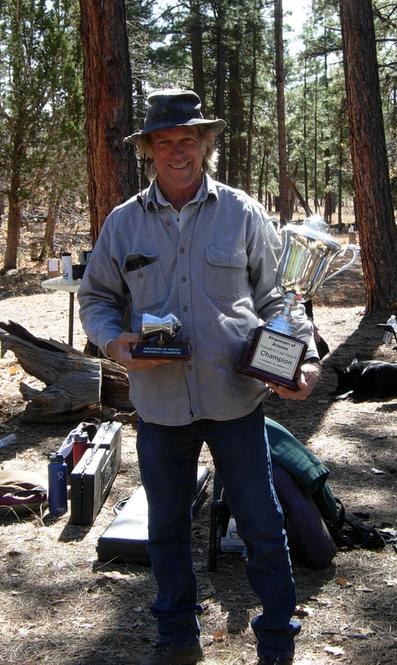 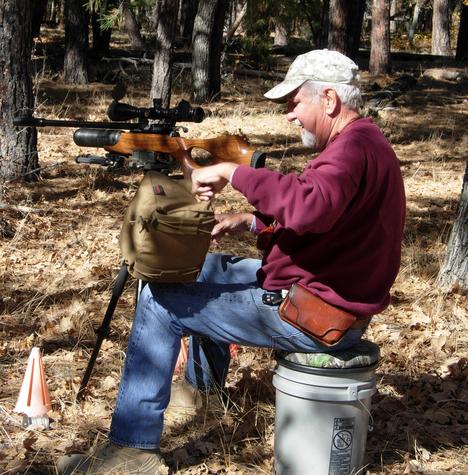 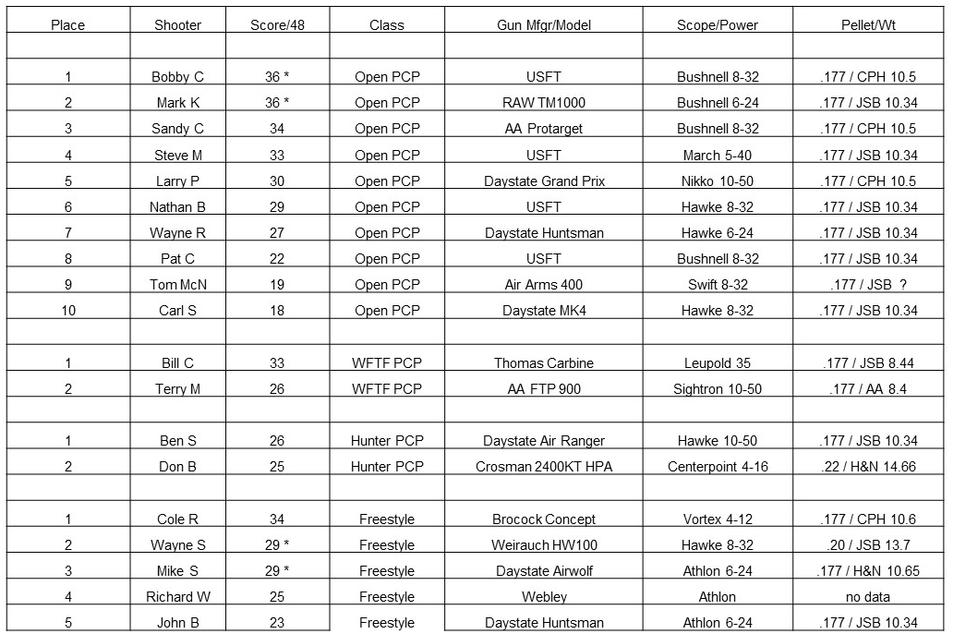 Steve with Samson, his 8 month old "puppy" who is looking at Amy and wanting to go play with  his frisbee.

Sorry, Doc.  I could not resist.  This is my favorite photo from this month and I had to chuckle when I saw it and just knew the perfect caption to insert. 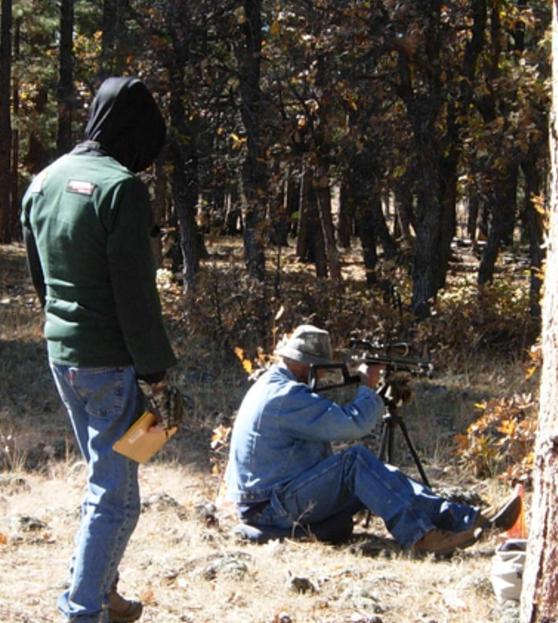 These guys were not at a loss for places to set the targets even though some of the lanes were quite close together.  You had to follow the strings to make sure you were shooting at the correct targets, when you could see them.  Some were obvious; others were hidden in the shadows.  Both of the forced position targets were elevated, with one on the side of a dead tree and the other on top of a broken off tree.  As the sun kept rising, all of the targets took on a continuing cast of darkness as the shadows increased. The Troyer factor was in the mid to upper 30’s if you were to use an educated guess, but unfortunately, the distances and KZ sizes were not recorded.  It was a good course layout, albeit a bit tough.