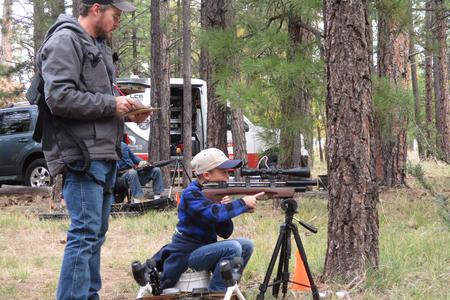 As you can see from the scores, Sandy and Larry battled back and forth until Sandy emerged as the Founders Cup match winner for the first time.  Great shooting!  Three shooters were tied for third place with Cole rising above Mark and Nathan, in the wind, for that spot.  Cole’s young son, Colben, was high youth shooter, and Doc Shrader, at 90 years old, was the high unlimited shooter. 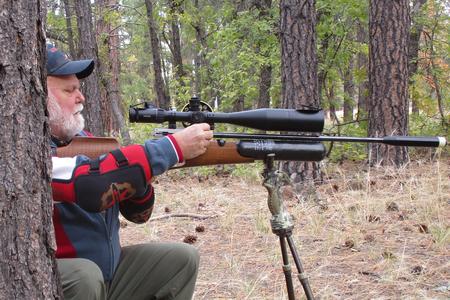 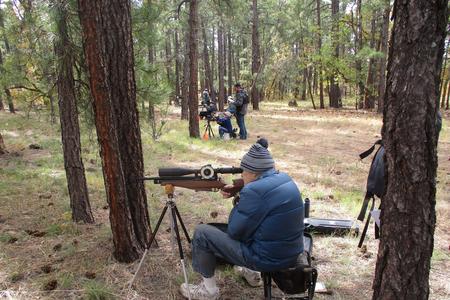 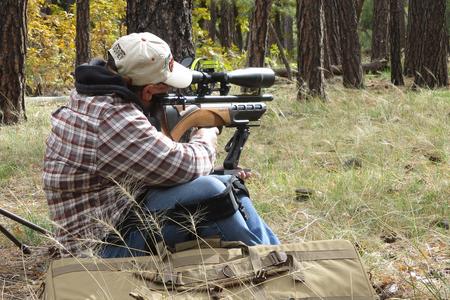 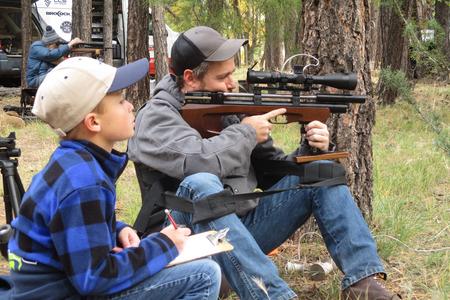 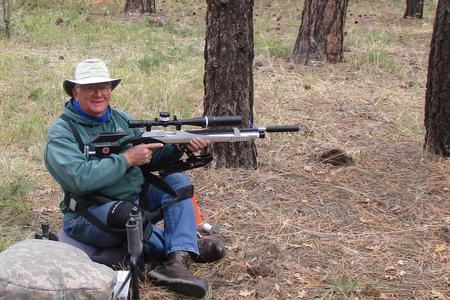 Thanks to our club treasurer, Mary Ann (aka, Miss Moneypenny) for taking registration and also taking the match pictures.  Thanks to everyone for helping set up and tear down afterwards.  It almost seemed unusual to be able to put everything away in dry conditions where we weren’t slogging around in the mud!

This is the last match for this season at Mormon Lake.  Next month, on the third Saturday, we will be back at Ben Avery shooting facility in Phoenix and utilizing the pistol silhouette range.  Going to give some thought into importing “terrain features” to make the area look a bit more interesting. 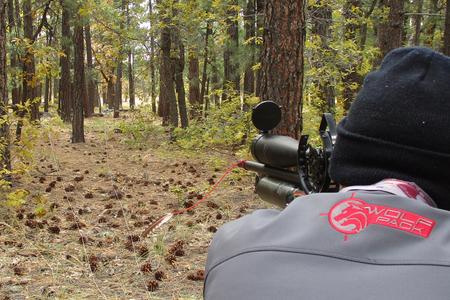 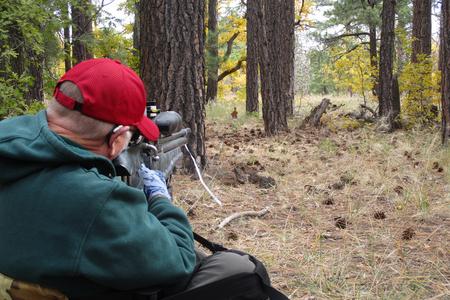 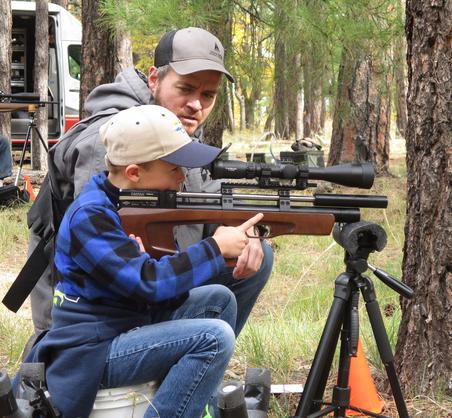 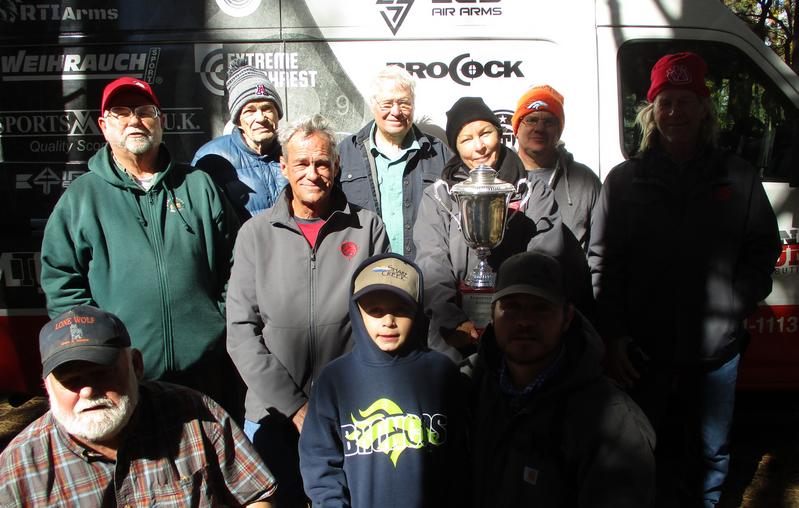 Colben is the high youth shooter and future of the club. 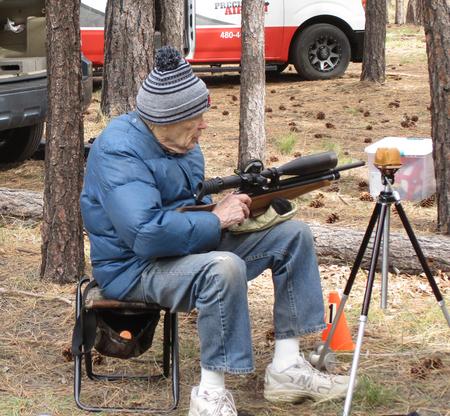 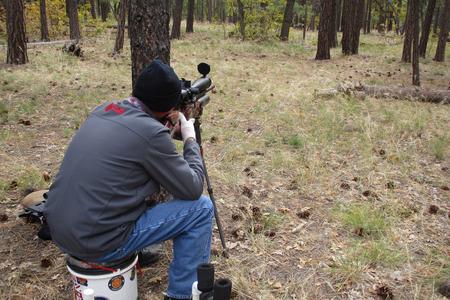 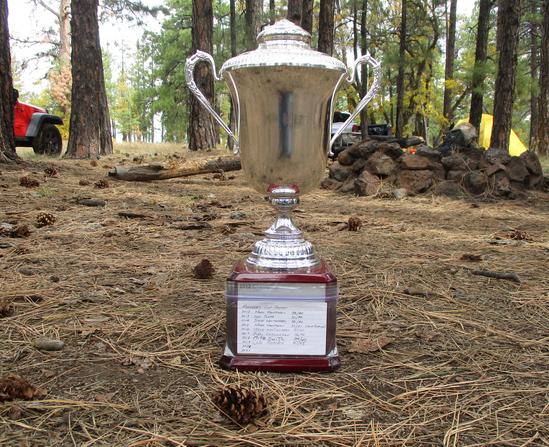 1992 was the year that Airgunners of Arizona came into existence.  29 years later, in 2021, we are still going as strong as ever.  And although the three previous monthly matches saw us shooting in, shall we say, soggy conditions, this month’s match was under somewhat cloudy skies, it was bright, with the sun poking through frequently.  A beautiful fall day.  The temps started out around 43 degrees (windchill at about 37) and warmed to 58 degrees and WINDY!

At 8:00 am the wind was out of the SW at 6 mph.  Not bad, and certainly not what the NWS called for.  That would change with the wind increasing to 15 mph with gusts to 24, and later, increase even more to 24 mph with gusts to 36.  NWS forecast was right on the money.  Yes, we shot in this, but you have to understand that in the pines where we shoot, the wind gets dissipated a bit because of the trees, but it sounds really LOUD when howling through the tree tops.  After enduring the wind at Nationals, last week in Morro Bay, you’d think we might be used to this….

The founding fathers of the club, in setting up the matches back in the day, would wait until all arrived to shoot, then pull out the targets with everyone pitching in to set the course.  Well, we did the same thing.  Although we had the course footprint laid out, we only had the blocks, clamps, strings, and targets at the firing line for each lane.  Those assigned to those lanes placed the targets where they felt they should go, based on KZ sizes and “obstacles” that presented themselves.  What we ended up with was a GREAT course that only took about 20 minutes to set up.

We had a few relatively close targets with small KZ’s, but when you place them behind a “V” in between trees, that KZ gets even smaller, especially when you take into account that the “V” was smaller than the target and the wind was coming in at an angle!  There were other targets where the pellet trajectory was threaded between trees that were almost in alignment.  Great target positioning and challenges!  We also had the targets that were stretched waaaaay out there and in the path of the wind.  Much of the grass was trimmed as best we could, but when the wind blew, some of the targets were almost totally obscured.  For you gentle readers taking all of this in, please look at the position of the grass in the accompanying pictures.  With the grass laying over at almost 90 degrees, you know the wind was blowing!  OH!, and we DID have fun shooting the match, too!Only 12 shooters today, which was just fine.  Seven shooters shot in Open PCP, with 3 shooters in Hunter PCP, and two in unlimited class.  The course was laid out in an “L” shape with 5 lanes facing east and the other 5 lanes facing south.  Target shooting directions encompassed a full 180-degree arc to take advantage of the wind, which came primarily from the southwest, with a little variation on each side of that. 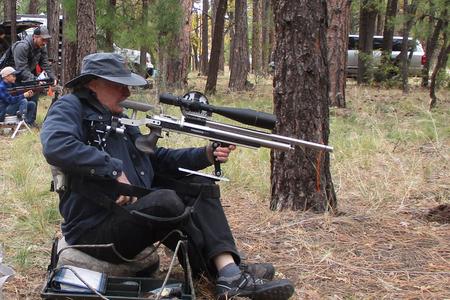