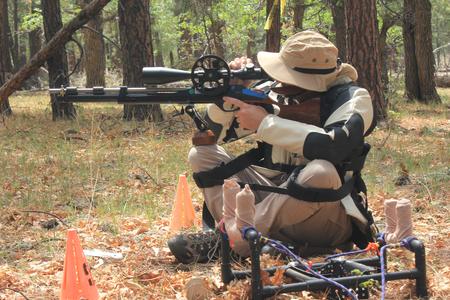 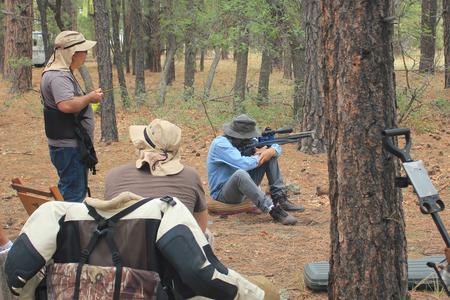 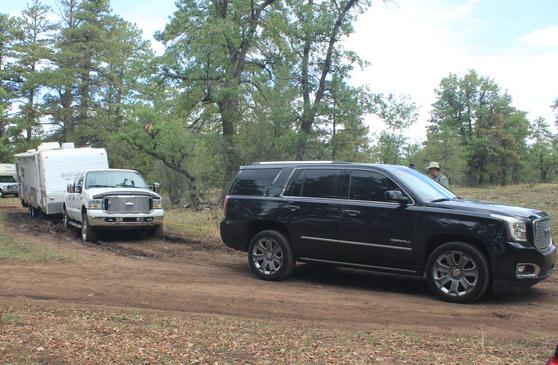 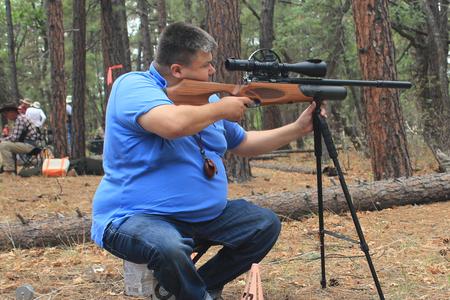 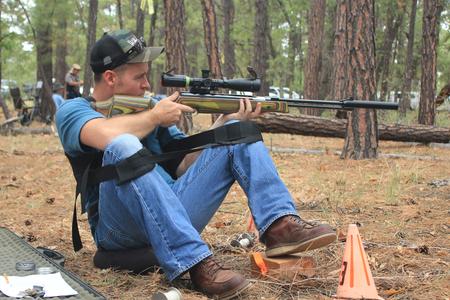 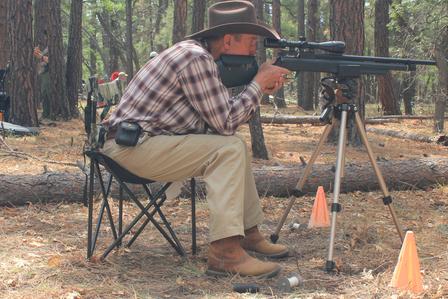 collating scores at end of match 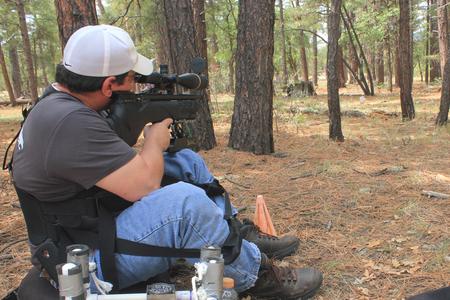 TThe various weather services gave differing accounts of “possible” precipitation percentages, however early morning started out absolutely delightful.  Temps in the high 60’s to low 70’s, with lots of sunshine and puffy clouds.  Then the clouds started to roll in but was still pretty nice.   We saw heavy dark clouds to the south and started hearing the rumbling/grumbling of thunder.  With two to three lanes to go at the end of the match, it started to drip, then drip heavier, and until we finished shooting, a good percentage of us were feeling a little soggy.  Good news though; NOBODY melted.

We had 6 new shooters this month.  Our group just keeps growing and growing.  Steve Q and Kent G and their wives drove up from Tombstone/Sierra Vista area to shoot with us.  Dan F and his son, Steeler, drove up from Phoenix for their first ever foray into field target, and Mike S Sr brought Mike Jr and Leslie G along for their first time shooting this game.  Welcome to all!

Steve M (our match director), with the assistance of Don B, Bobby C, and Wayne S set up a rather tricky course of fire (lots of small kill zones) on either side of a straight line out into the forest with odd numbered lanes shooting to the east and even numbered lanes shooting to the west.  We zig-zagged back and forth all day.  They had 10 lanes set up with two targets per lane.  With these many shooters we had 6 squads of 3 shooters each and 4 squads with 4 shooters each.  It took a bit longer to shoot the match but gave everyone an opportunity to socialize with each other throughout.  During the course of the match, we only had two minor stoppages for target adjustments.  Otherwise the match flowed pretty well.

We had 5 classes contested this month, with the largest contingent of Hunter PCP represented with 12 shooters.  Rex (NM) and Ben (AZ) were each tied with 34/40.  Rex edged Ben in the tie breaker by scoring more hits in a row.  (It was still raining and no one wanted a shoot off).  Steve M decided to shoot Hunter rather than his usual Freestyle this month and garnered 3rd place.  Also shooting in Hunter PCP were our junior shooters.  Steeler F, shooting in his very first FT match shot 24/40 while brothers Ethan and Alex took 2nd and 3rd.

In Open PCP, Garrett K, from Phx Airgunners, traveled from Mesa and finished in first place with a 38/40.  Doug T, Bobby C, and Scott H were all tied with 36/40 and finished in that order due to the tie breaking procedure listed above.  In Open Piston, Cole and myself were the only two brave enough to give this a try.  This was NOT a springer friendly course (Edit note; actual Troyer rating is not available), but we did it anyway with both of us shooting sub 12 fpe guns.  Both of us developed our scope dope on Friday, the day before the match.  Yours truly prevailed today but only with a score of 22/40.  Hopefully that will improve next month.

WFTF class was populated by Bill C (AZ) and Pat C (NV).  Bill won handily with 36/40 after returning from his recent great showing while shooting a world cup match in Spain.  He seems to really like shooting his Thomas carbine.

Freestyle class is being currently dominated by Mike S Sr. shooting a 39/40, although new shooter, Steve Q put a scare into him by shooting a 38/40.  That is good shooting.  Another new shooter, Mike S Jr, took third place with 36/40.  Looks like he may give dear old dad a case of heartburn in the future as well.

View looking down the course.  Ben, Rick, and Carl J in foreground.  Bunches in background 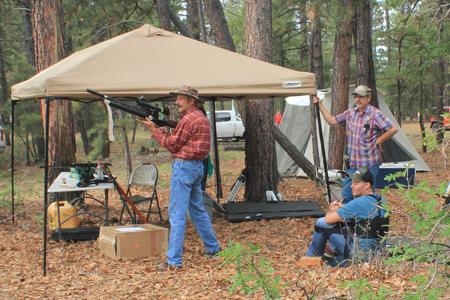 In lieu of a group photo, due to rainy conditions at the end of the match, here is most of the group on the site in range. 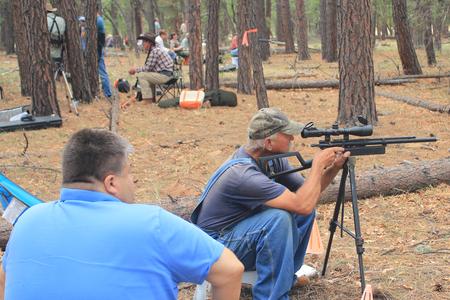 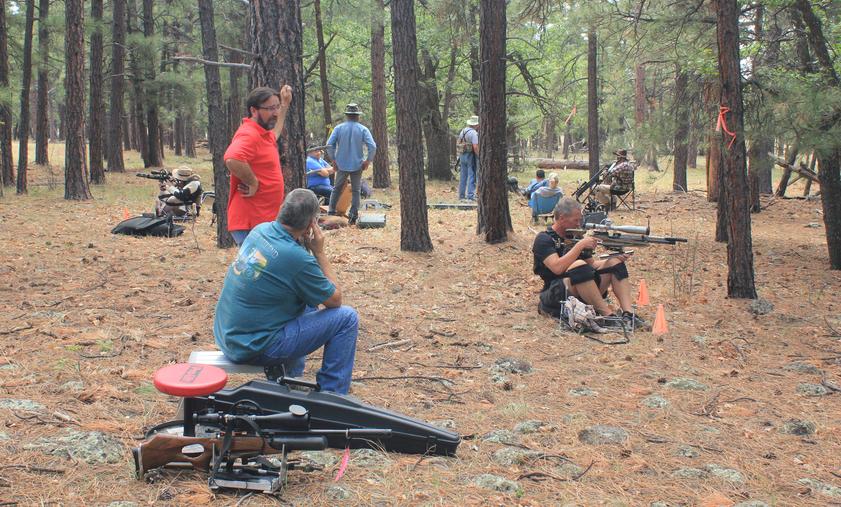 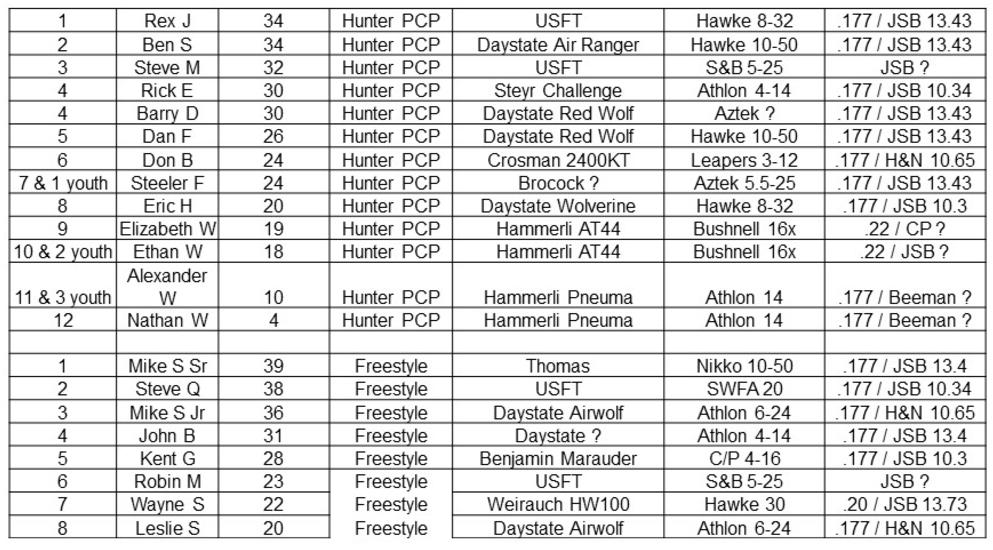 Eric, Don, and a bunch in the background 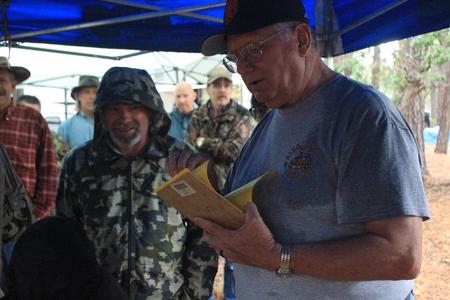 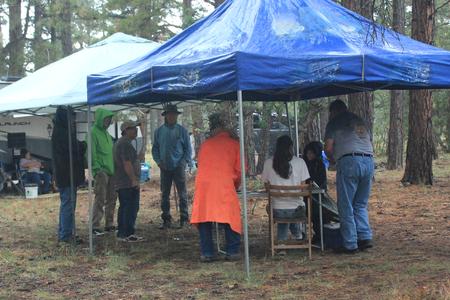 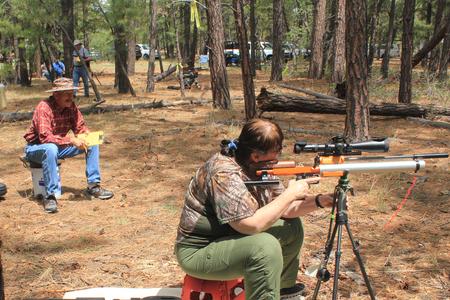 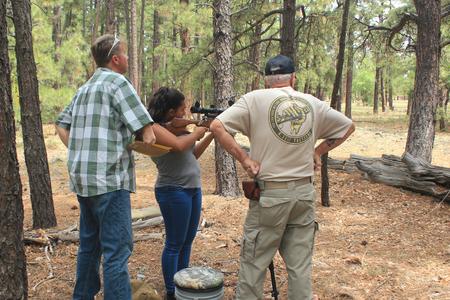 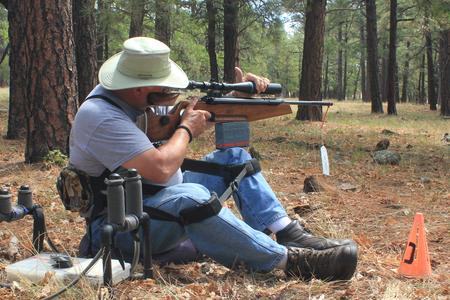 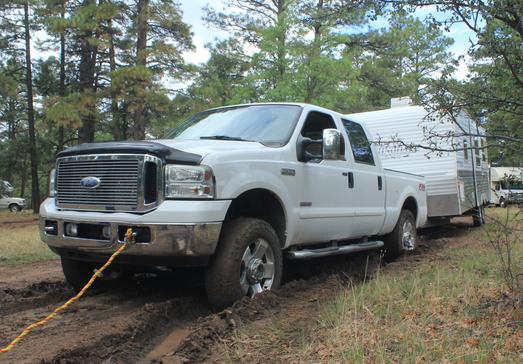 Here is Dick, buried in the bog.  Thanks to Carl, who came to the rescue and pulled him free. 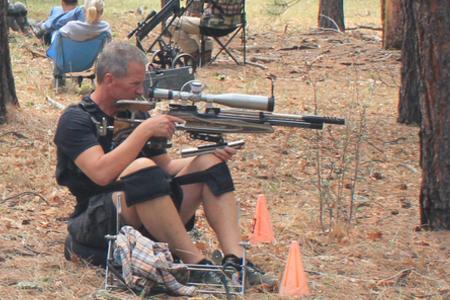 Nathan, either Ethan or Alex (not sure), Liz 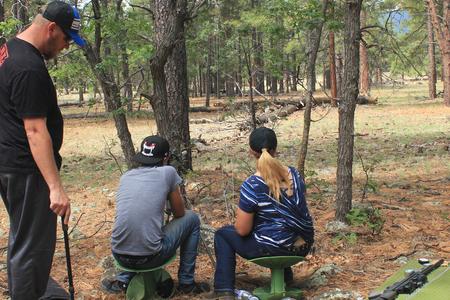 Awarding pins at end of match.  Steve M is in cammo rain gear

Mother Nature smiled on us.  So, she let loose the needed rains which allowed the forestry department to lift the fire restrictions that prevented us from shooting in June but permitted us to hold our July field target match at Mormon Lake.  She also made sure that we didn’t complete a full course of fire on our first match of the summer season without dumping a bunch of moisture on us towards the end of said match.   I think this was to ensure that we didn’t start feeling cocky and spoiled and taking her for granted.  Thank you for letting us shoot, and yes, we got the message…..LOL.

We are fortunate to live in an environment that allows us to shoot year-round.  When that doesn’t happen, such as canceling last month’s match due to Stage II fire restrictions, most of our members start having withdrawal symptoms.  As such, we had 34 shooters participate in this month’s match.  There would have been 36, but two of the guys hadn’t shot in a while due to work and were just happy to be out and socializing with the rest of the group, as were a number of the wives also.  It really was good to see everyone again.

A number of the regular suspects arrived as early as Thursday and set up camp on site.  Six travel trailers were arranged on the open side of the clearing and the tent campers were on the opposite side of the clearing.  Because Rex and Cole are known primarily as piston shooters, their area was known as “springerville”.

One late comer on Saturday morning, Dick W, arrived pulling his camper and promptly got stuck in the mud up to his axles (from previous rains) on the upper track to get into the site.  This area is now known as the “bog” and Dick is now known as the “bog monster”.  Fortunately, Carl, as he was arriving, pulled around in front of him, used a tow rope supplied by Don, set his vehicle in 4WD mode, and pulled him out.  Thanks Carl! 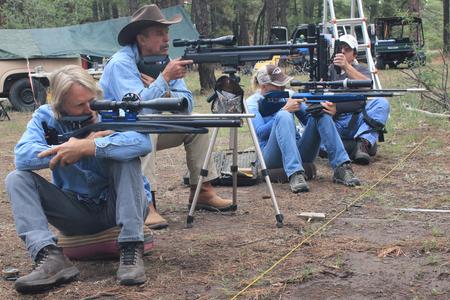 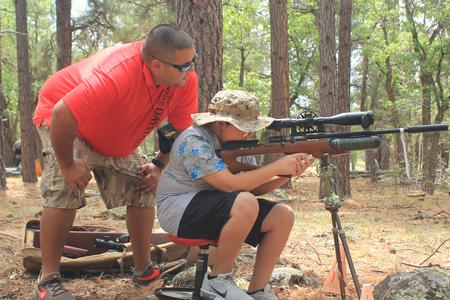 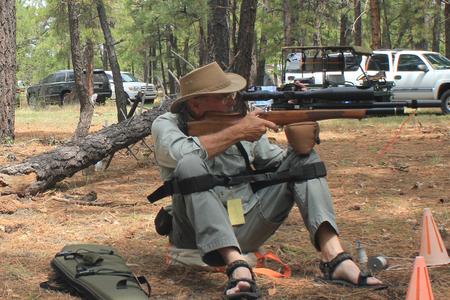 Awards were handed out to those who stuck around afterwards.  There are a number of award pins that will be presented at next month’s match for those who decided that warm and dry was better than standing around cold and wet.

A big thank you goes out to Steve, Don, Bobby, and Wayne for setting up the course.  You guys did a good job!  Thanks to Don for offering his services as photographer, seeing as I forgot my camera.  Don took some great pictures.  Unfortunately, we could not get a group shot after the match due to the rainy conditions.  There is always next month when we might have an even bigger turnout.

Thanks to everyone who attended.  We hope that you had a good time and you didn’t get too wet.