Greg and his Brocock Bantam Sniper 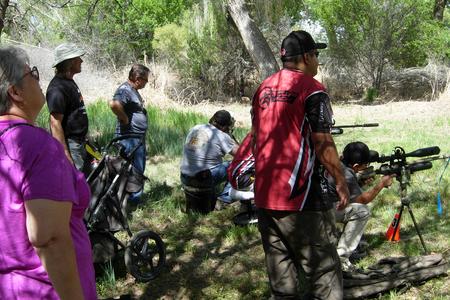 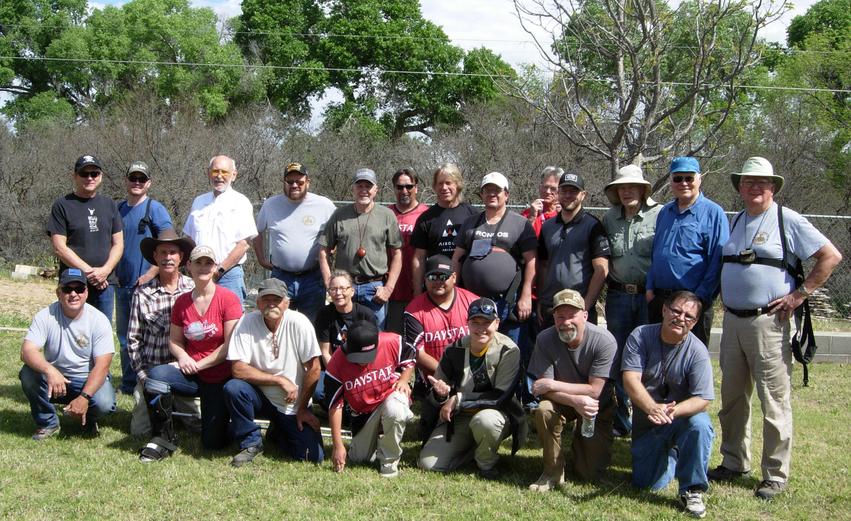 What are you looking down here for?

Speaking of new shooters, Kent brought along his daughter who “claims” to have not shot before.  She may have had her leg in a cast and was hobbling around on crutches, but she was nailing targets right and left while dear ole dad was pumping his fist in the air with pride.  This was “supposedly” her first-time shooting air rifle.  Crystal plans on coming back regularly.

Dan was also a first-time shooter with us and did rather well.  Seems our hot shot shooters are also pretty good coaches.

We contested Five disciplines this month; Open PCP and Piston, Hunter PCP, WFTF, and our club Freestyle class.  Here are the scores and equipment stats: 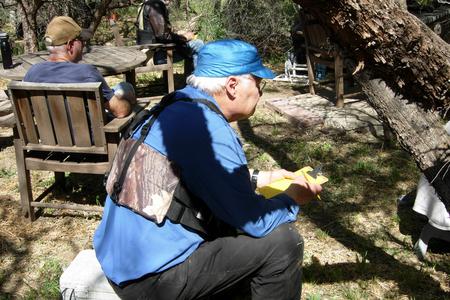 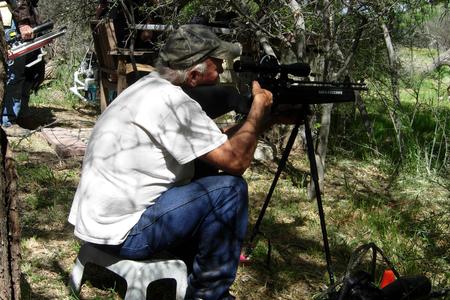 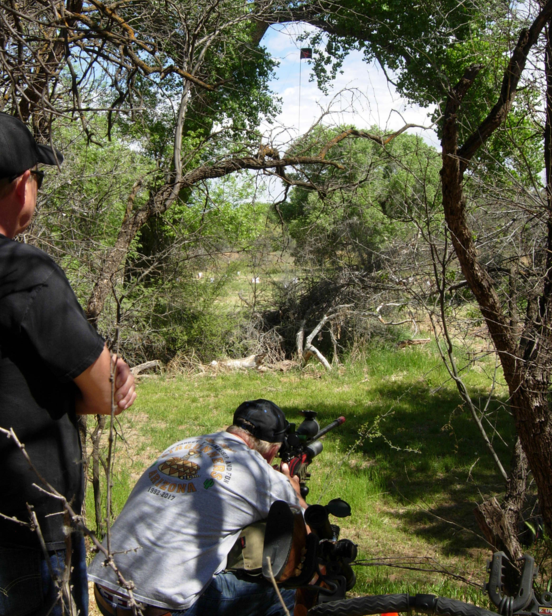 Dan shooting for first time, being coached by Pat 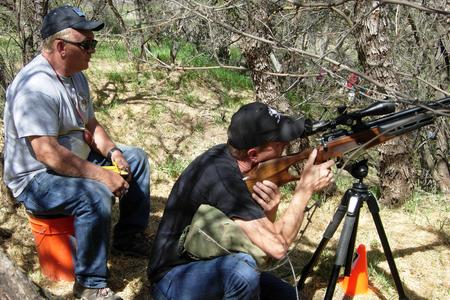 Each lane had two targets with the strings tracking back to the firing line, except for one lane.  When asked where the target was, we were told to look up.  We were scanning the trees and still didn’t see anything.  LOOK UP, so we looked higher and found a bell target with a 1 ½” KZ suspended from one of the top branches in the tree, maybe 40 feet or more up.  This swayed a bit in the breeze but made a very audible “DINGGGGGG” when hit.  How they managed to get that darn target up there and positioned is beyond me….but it was fun to shoot at.

The Troyer factor for the course calc’d out at 33.19 without the wind.  With the wind that built up later in the match, it would have calc’d out at 41.12!  The difference between the light breeze and what we ended up with was averaged, so we can safely say that the course had a T-factor of 37.16.  Nothing to sneeze at unless you suffer from hay fever in which case the “cotton” pods that were falling and blowing in the wind from the cottonwood trees looked like a snow storm.

Nathan scoring for Don.  Other lanes in background 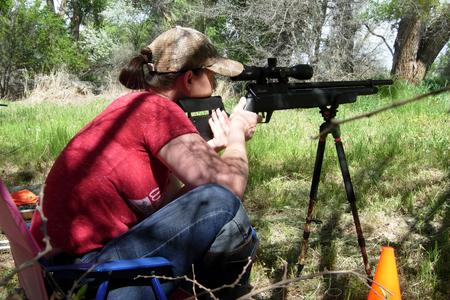 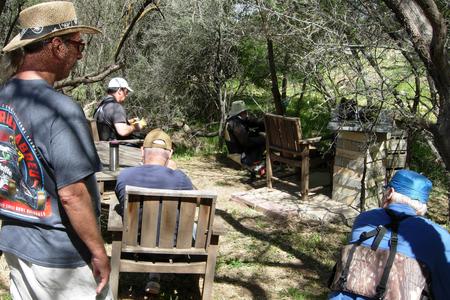 The Bell target is that little square hanging below the top branch in the photo and has leaves swaying in front of it.

The shooting position for the Bell target is where Pat is sitting.

The Bell target is the near shot.  Pat is aiming at the far target, out at around 54 yards and off the picture.

We also had a few of our long-time members, that we hadn’t seen in a few years stop by and visit with us.  Dale and Debbie surprised us with their visit.  We have really missed them.  After trying a few shots on some of the guns after the match was over, we hope they are getting bitten by the gun bug again, instead of……..golf……!

Gloria stopped by to say hi as did Wayne, our VP.  He was walking kinda gingerly and did not stay to shoot.  Mary Anne, our Treasurer, attended, handled registration, and took all the match photos. It felt like a big family reunion!

Also in attendance were friends of Bobby and Sandy who helped with lunch.  A big welcome and thank you to Vicki & Travis, Tonia & Larry, and to Harold.  They appeared to have a good time and tried out the various Airguns after the match.  Bait the hook and dangle it just a little bit and we end up with new shooters each month.  Funny how well that works! 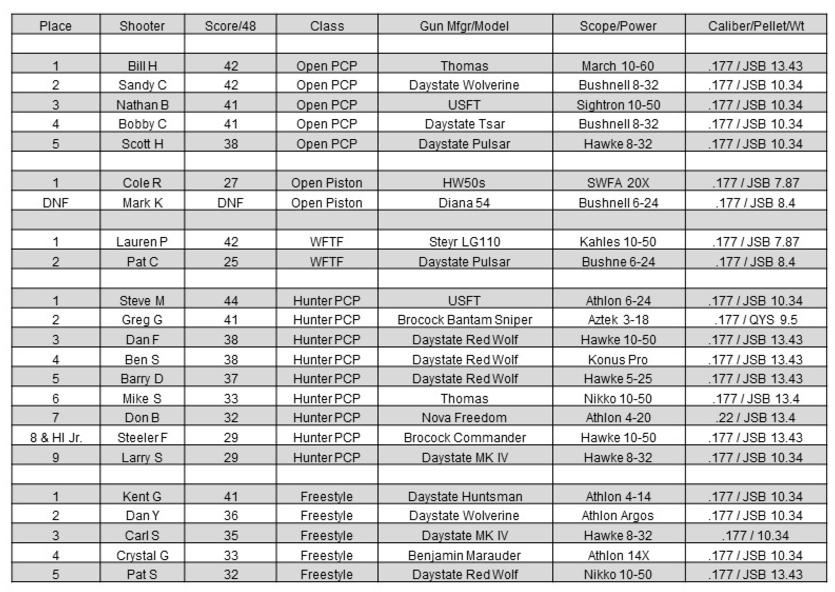 There are 6 targets hidden in this mess somewhere.  Can you find them?

Yes, yours truly did not finish the match.  I seemed to have a bit of a problem with Miss Diana and was lucky to stop shooting when I did or face the possibility of blowing out the breach seal.  Since returning from the match, and with multiple consultations and gun inspections, the culprit has been identified and corrected.

After the match, Sandy and her full staff of helpers had brats, sausages, various salads, relishes, etc, etc, with cake and home-made ice cream for dessert!  Wow, what a spread.  Thank you, guys.

The scores were tabulated and several ties were documented.  With full tummy’s and feeling somewhat mellow after lunch, no one wanted to have a shoot off.  The placements were determined by counting up the consecutive number of hits in a row from each competitor and listed in that order.

Bobby and Sandy, we are once again indebted to you for inviting all of us.  We will see you again next month (May) on the third Saturday.  Thanks also to all that assisted and helped make this a most enjoyable and fun-filled day of pellet shooting. 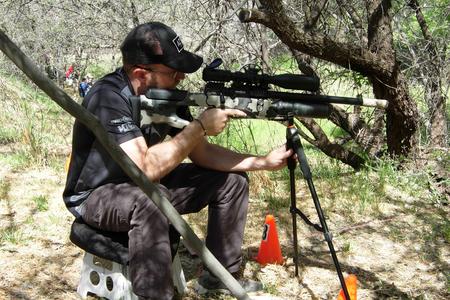 Our monthly matches for April and May are going to be in Camp Verde, AZ, thanks to Bobby and Sandy’s generous offer of the use their range.  23 shooters, some coming out of winter hibernation, converged on the range, which was thick and green with vegetation and located next to the Verde River.  The skies were mostly cloudy with bright sunshine peeking through, with the temps in the 70’s during sight in, but would gradually increase into the 80’s during and after the match.  The wind was darn near dead calm early on, maybe 1 – 2 mph, but that would change as the match progressed….drastically.  The cloud cover would also get blown away to reveal bright blue skies that stretched to the horizon.

Bobby and Don were busy setting up the course in the days preceding the match.  Twelve lanes were set facing predominantly north through the thick undergrowth that makes up the depression area where the Verde River overflows during major storms.  This past winter has created new fallen limbs and uprooted trees and other “blow-down” in which to hide targets and create a fascinating course of fire on which to play pellet games.  Of course, the big trick at times was FINDING the targets. 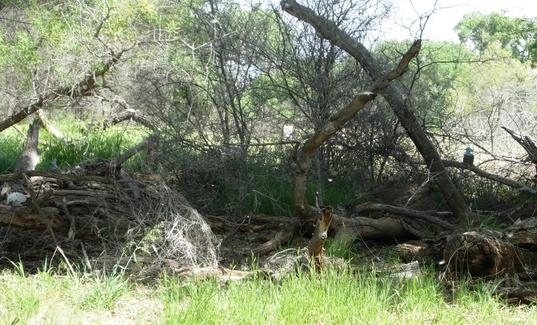