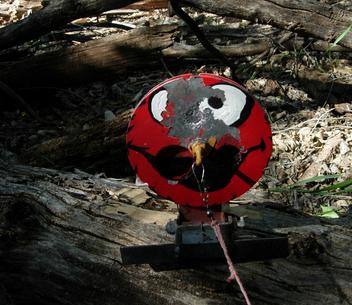 We had good representation in 4 disciplines this month.  Open PCP was heavily contested with a lot of good scores despite the wind conditions.  Carl, aka “Doc” (he IS a medical Doctor) was high score with a 33/40.  Bobby and Nathan (another medical Doctor) were tied with 32/40.  Due to time frame and the need to meet another obligation, that tie was broken using the longest string of hits on the score card.  Bobby came out on top with 15 hits in a row.  And yes, you did read that right; we have two MD’s as club members.  The free medical advise is outstanding;
Doc, it hurts when I do this.”  “Well, don’t do that!”  Priceless advice for which we are grateful…..LOL!  We had several other sets of tied scores, all clumped together, which give you a pretty good idea of the level of marksmanship we have within the club. 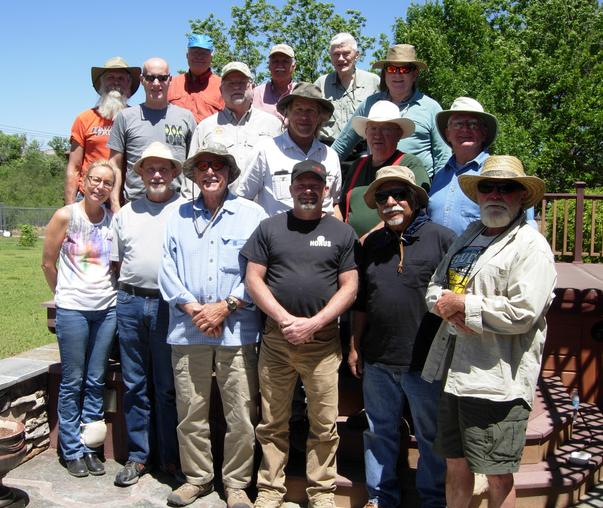 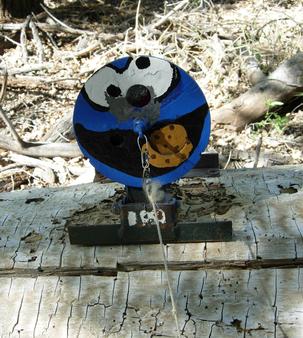 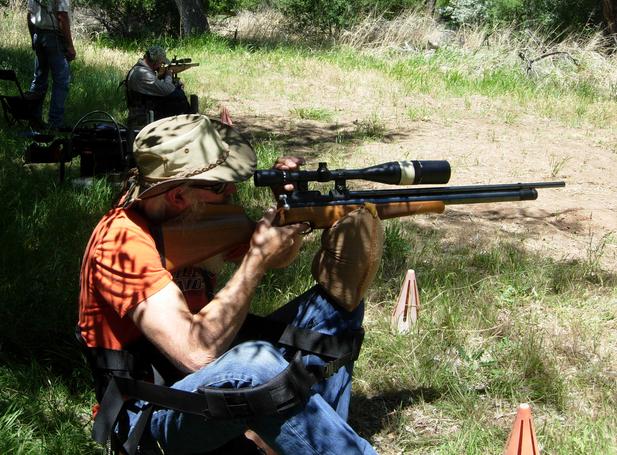 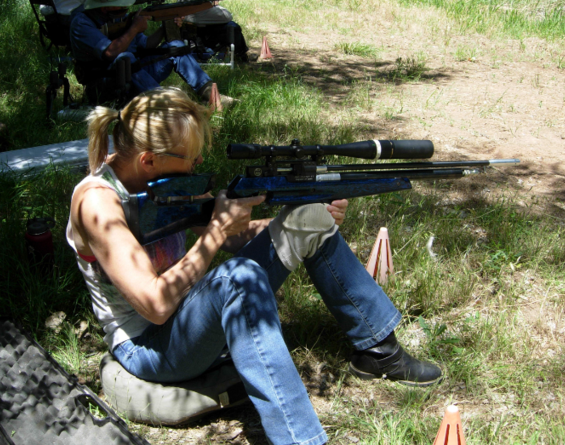 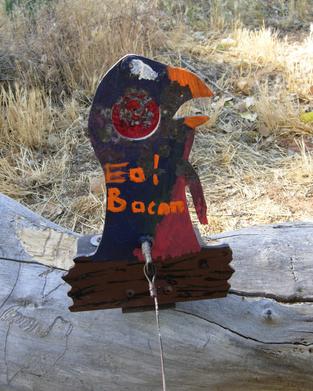 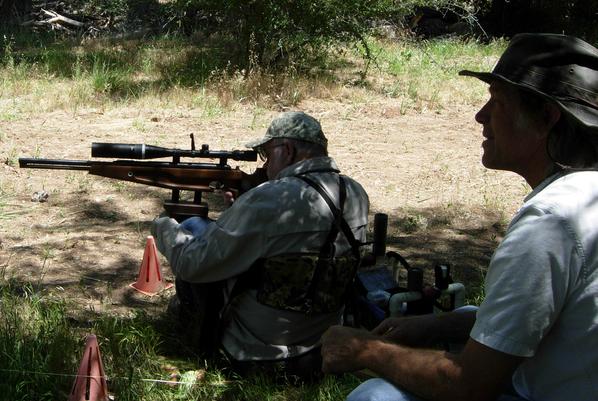 John went on to win overall match winner this month. 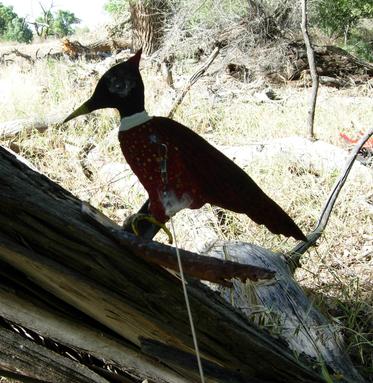 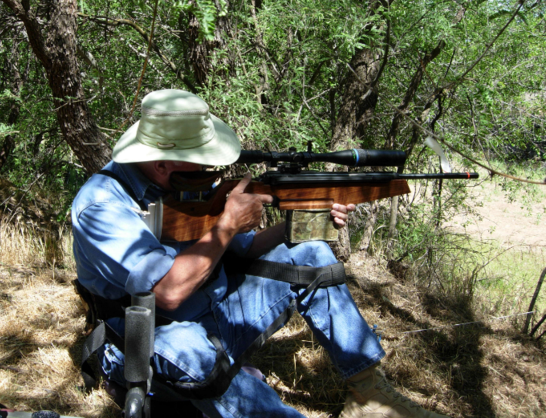 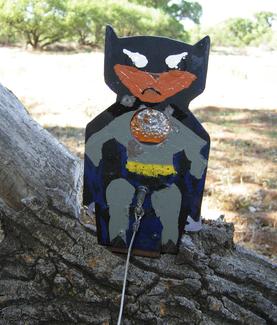 Freestyle class had 5 competitors at each others throat, with John taking high score for the class and Top Gun (movie is 30 years old earlier this month) for the match with a 36/40.  Steve and Dewain were right behind with 33 and 32.  Steve gets the club top recruiter award for bringing in yet another new member.  Vance shot his first ever FT match and loved it.  He and Steve shot together using Steve’s gun.. 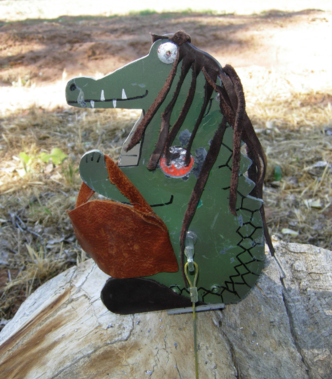 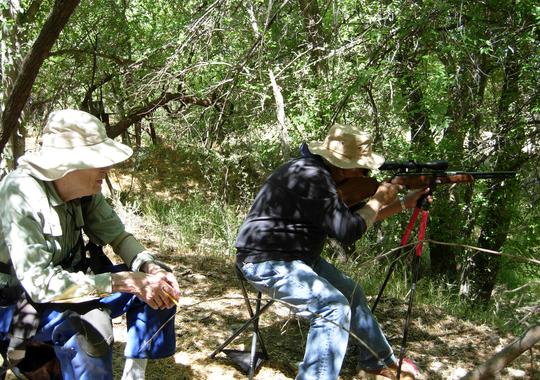 Here is Steve shooting in Freestyle class and showing Vance how it is done.

The Field Target match for May was supposed to be at Ben Avery range in Phoenix.  Some thought that it would be too hot and the NWS predicted 90 degree temps and high winds, so they asked about moving to Mormon Lake early.  The weather prediction for Mormon Lake was low 60’s but with high winds.  Club members living in Camp Verde offered their property for the match.  The weather turned out to be 80 degrees, clear blue skies with bright sunshine and fast moving clouds and WIND!  Wind that blew things over, and sent anything not tied down, flying through the air.  The wind was a variable 23 to 28 mph with gusts that were 35 mph and greater.  Blustery and ferocious are good descriptive terms.  Otherwise it was a great day for shooting field target, and we did have a great day.. 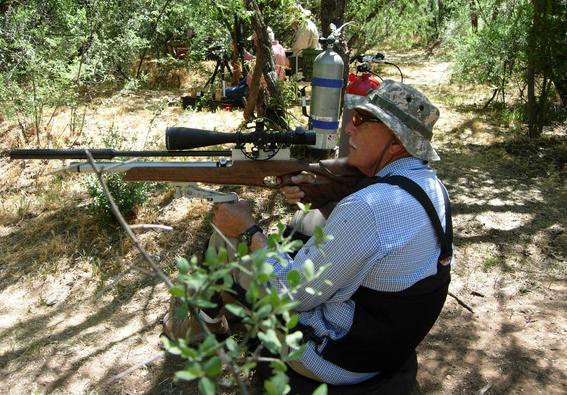 Here is Vance taking his turn while using Steve's gun.  He is having fun. 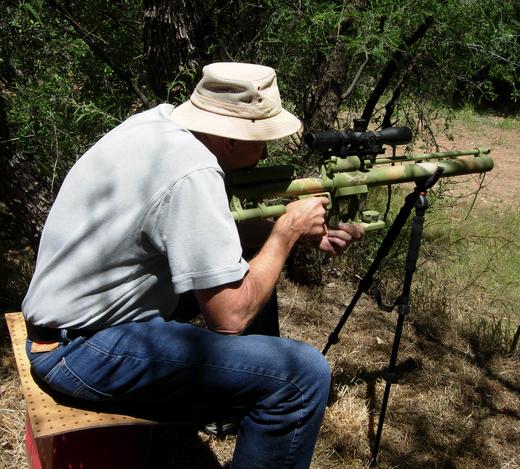 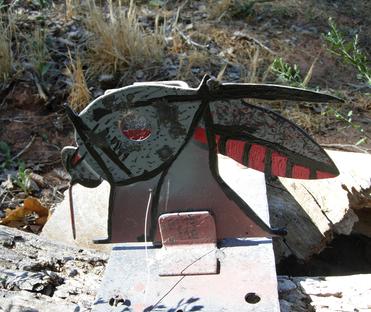 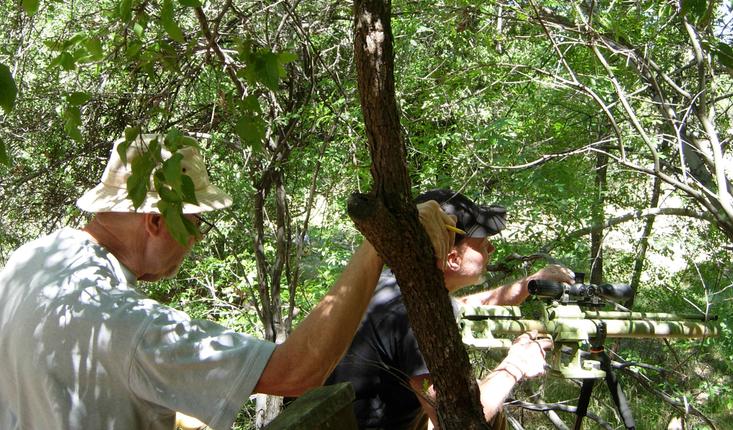 The stock is a new addition and this is its' first field trial. 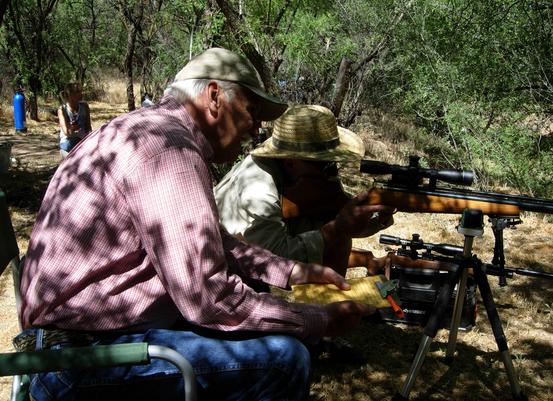 We had 16 folks that traveled from parts north, parts south, and from waaay far west attending and each of us had a wonderful day.  Getting to play in the wind was very worthwhile, if for nothing else than to learn hold off in different directions and swirling conditions.  This month we remembered to take some pictures of some of the targets used from last month as well as this month.  Most were very novel in the paint scheme and had us chuckling.  Thanks go to Laura, Darrel’s wife, for her artistic abilities and imagination.  While we are at it, we want to thank Natalie for doing the photographic duties to visually document our merry-making.  Some years from now, club members will look back on these photos and say, “Remember when….?”  All good stuff.

Tom is having fun knocking down targets in the wind.  Look at the grass in the background to see how far it is leaning.

After awards were presented, some of the folks had to depart, while others retreated to shoot their 10 meter guns (that is always fun).  Several withdrew into the game room for ping pong.  I have not played ping pong in over 30 years, and even though I had my butt handed to me, I had fun playing.  Yes, today I am sore….dang near every joint in my body!

Next month, and on until October, the club will be shooting at Mormon Lake.  We escape the heat of the Phoenix area and retreat to the cool pines of northern Arizona.  The smell of the pines and the utter tranquility of the area make the stress just melt from your shoulders.  Give some consideration to joining us.  The AZ state championship and AAFTA Grand Prix will be there in September and the Founder’s Cup match will be there in October.

Open Piston had two competitors, each shooting 12 fpe springers.  In the wind, that was FUN.  An eye-opening experience, but definitely fun since we shot on adjacent lanes.  Alas, we had a lone Hunter piston shooter because one of our other hunter piston shooters thought it would be a better idea to attend his sister’s birthday party.  She did turn 60, but I still would have just sent her a card…..like I did with my sister. 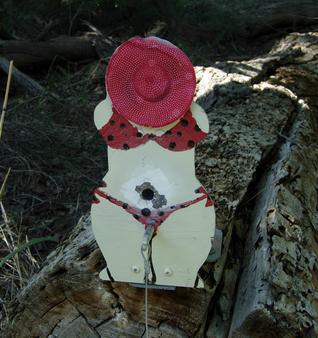 After shooting, we retired to the patio where Bobby and Sandy provided lunch.  They are trying to get us to eat healthier, so we had an abundance of salad fixings with sliced grilled chicken.  We have to thank them for opening their home to us for the second month and feeding us again.  We are indebted greatly.

While handing out thank you’s, Airguns of Arizona once again picked up the match fees for the group.  We cannot thank them enough for that and providing the PAD van on location.  After we ate (and washed our hands), Larry opened up the van with the troops oooohing, and aaaahing over all the neat new toys.  Larry also filled air bottles and then spent an inordinate amount of time wiping drool off of all the new guns.  See what you guys miss when you don’t attend a match?  A really big thank you to Airguns of Arizona and Larry for providing for us and promoting field target and airgunning in general.

Here is Paul looking downrange trying to figure out the wind.

Carl (Doc) looking on while Freddie lines up another target. 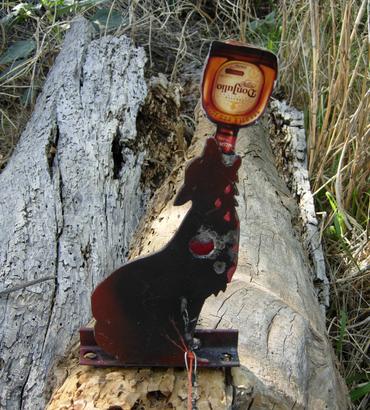 Do not EVER underestimate her shooting abilities.  She is deadly with her AA Protarget