Here is the gang, minus a few folks who had to leave early.  Sorry that there are no other pictures, but we are looking for a photographer so that all the shooters can concentrate on shooting. 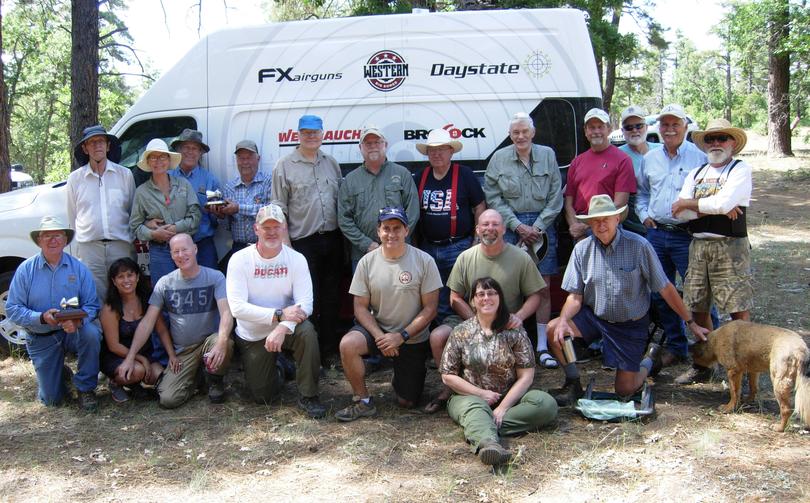 I cannot finish this report without making a comment about the comeback kid.  That would be Richard, my shooting partner for the day.  He had been shooting his Webley Raider several days before the match, with the zero set for 75 yards.  He took no sighter shots prior to the match and realized at the last minute (while on the line) that he had NOT re-zeroed his scope.  He sorta remembered turning a full 3 revolutions, but was not sure.  Within 4 shots, he had it back to being dialed in and finished out the match as if nothing had been wrong.  Didn’t faze him one bit!  Maybe my words of encouragement (which cannot be printed) may have helped.  Maybe not….LOL!

Next months match will be August 20, again at Mormon Lake.  Thanks to all those who helped set up the match on Friday and tear down on Sunday.  I think we will have to tear down on Saturday right after the match.  The cows roamed through the course sometime during the night and dragged the strings all over the place.  Thanks again to Airguns of Arizona for their sponsorship of the match.

On a final note, when attending upcoming matches, you may want to hang around afterwards.  The impromptu shooting using our 10 meter guns and BB guns at various “reactionary” targets on the sight in range, is an absolute HOOT!  Picture, if you would, a Vortex red dot scope ($250 +/-), mounted to a picatinny rail, on a Red Ryder BB gun…..that will hit whatever you point it at!  We just have silly amounts of fun.  It keeps us young!

Hurray!  The fire ban has been lifted in the national forest; therefore the campers that spent the weekend communing with nature can have a small campfire in the evening.  And yes, for those of us who camped, whether travel trailer, van camper, or tent camper (me), we enjoyed it immensely.  The skies were clear and full of stars and the moon was almost full.  A flashlight was definitely not needed.  Quite pleasant, very relaxing, and peaceful while out in the middle of a Ponderosa pine forest.

Our intrepid north country match director, Steve, set up the course with the assistance of Wayne, Bill, and Don (who hails from New Mexico).  Thanks guys, that was a big job and much appreciated.  Had it not been for construction traffic and that car fire, I might have arrived earlier.  This month we had 13 lanes, with two targets per lane.  This was done in anticipation of the State championships and AAFTA grand prix coming up in September.  We had our designated number of forced position shots, and our designated number of targets beyond 40 yards.  Figuring in the wind (more on that later), the Troyer factor was 37.56.  Definitely a challenging little affair, but one that we enjoyed immensely.

The weather was warm (low 80’s) and definitely more humid, so we know the rains are coming at some point.  The sky was cloudless and the sun very bright, but the thing that created the biggest challenge was the wind.  The NWS called for winds in the low to mid teens, but with gusts as high as 30 mph.  We did not have that, but it was variable, swirling, and changed directions frequently.  We would have relative calm followed by sudden gusts that would catch you unawares.  It made life interesting causing vegetation to blow in front of targets, alter points of aim and impact, generate a few smiles, followed by a muttered expletive, but hey, life goes on.  We all had a good time as a result.  Well, I did anyway.  Shooting a 12 fpe gun in the wind is a continuing learning experience.  It is amazing how much a pellet moves sideways!  Gotta talk to Terry.  He was shooting a 12 fpe gun as well.

We got things started on the right foot with club President, Larry announcing at the shooters meeting that this month’s match was being sponsored by Airguns of Arizona, who picked up the match fees for the month.  Larry also had the PAD (Precision Airgun Distribution) van on hand, which is filled with all kinds of new Airgun goodies.  Larry was also on hand after the match to refill air bottles, as well.  A very big Thank You to Airguns of Arizona for being so gracious and committed to promoting Field Target.

We were pleasantly surprised last month by having 21 shooters participate.  This month, we again had 21 shooters participate….along with 2 dogs, 1 ferret, and a herd of cows.  Fortunately, the cows kept their distance and did not bother us.  We had a bunch of new folks again this month.  Terry and Arline moved to Arizona from Wisconsin back in January and were able to participate for the first time.  Arline shot her very first match and ended up in second place in her class!  Perry shot his first match ever and ended in a three way tie in his class while shooting very well.  A number of other folks showed up to see what we do and how we do it.  The word is getting out.

The big surprise was Doug.  He just moved to Arizona recently from New Hampshire (I think that is what I heard.  If not, someone will correct me), bought a new gun and scope several DAYS before the match, sighted it in, then got directions to the venue, shot his very first match, and WON his class!!  His smile was beaming ear-to-ear.  Everyone who shot was having a good time; maybe a little bit frustrated with the wind and a target or two that were hard to see (deep in the shadows due to the position of the sun at one point or another), but nothing insurmountable.

There were some very good scores submitted.  Out of a possible score of 52, Bobby shot a 49 in Open PCP class.  The man is a machine!  Bill was close on his heels with a 45, and Sandy was close behind that with a 41.  Larry was one point back and was using a new scope, and new hydrodip finish on his gun, and several other “enhancements”.  Another notable was Carl, shooting a 31 in his second match.  Carl (who had not shot before and is a friend of Doc Shrader) is a retired college engineering professor and may be using a bit of that knowledge to calculate the wind.

In Hunter PCP, Doug shot a 25 in his first match, as noted earlier in this report. Arline finished second with a 19 barely eeking out Bill by one point.  A nice tight race.

In Freestyle class, which seems to be growing monthly, Steve shot a 48 while using a new scope.  Peykan is making leaps and bounds and finished second with a 44.  Robin was hot on his heels with a 43.  The guy to watch out for is Wayne.  He is very quietly whittling away at the scores and will be a force to be reckoned with.  A point here, a point there, and pretty soon he is going to be hammering everybody.  If we had an award for most improved shooter, Wayne would be it!  Good shooting.  The rest of the field shooting Freestyle are no slouch; the lowest scores submitted were all tied with a 33.  Nice job!

Here are the scores and equipment rundowns;