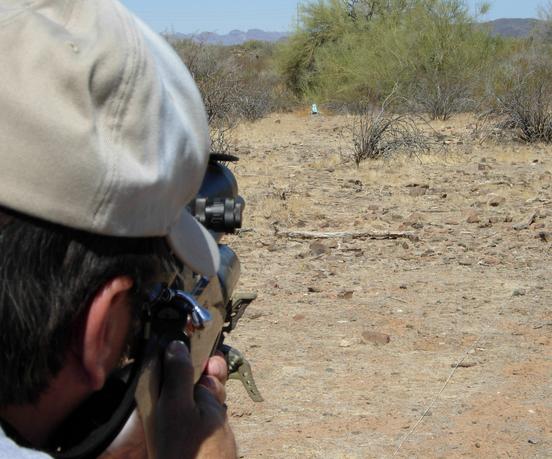 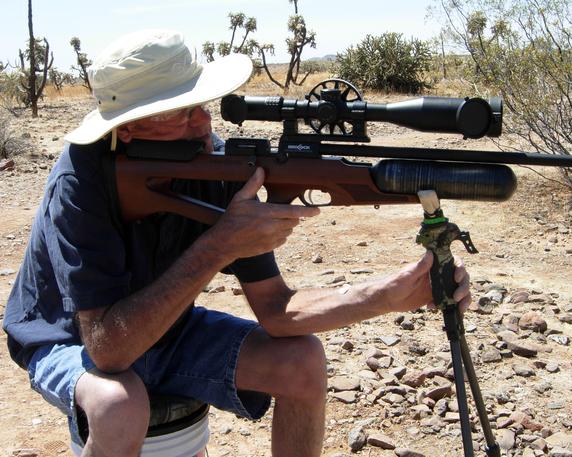 Looking over Ben's shoulder at the female groundhog in the distance

After the match, the targets were left out because a number of shooters wanted to shoot through the second time.  Scores were tallied, awards were handed out, the group photo was taken (thanks to Rex’s wife behind the camera), and the crew went their separate ways or back out onto the range.  I want to recognize Mike for helping set up the course, and Rex, Cole, Mike, Paddy, and Larry for helping take in the targets afterwards.  All of this help is greatly appreciated.  We tried some new things this match regarding target mounting and string holders.  We will report back after we test them a bit more.

Next months match will be in Camp Verde, AZ.  More info to follow. 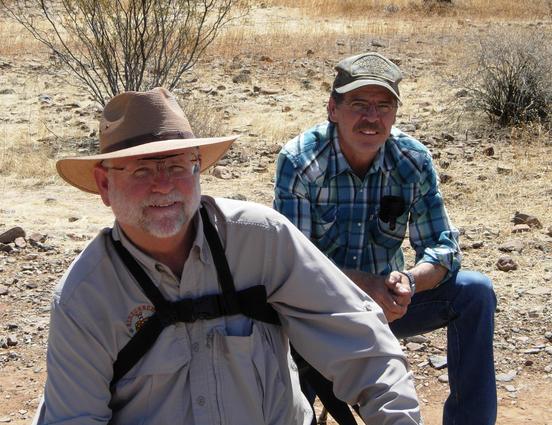 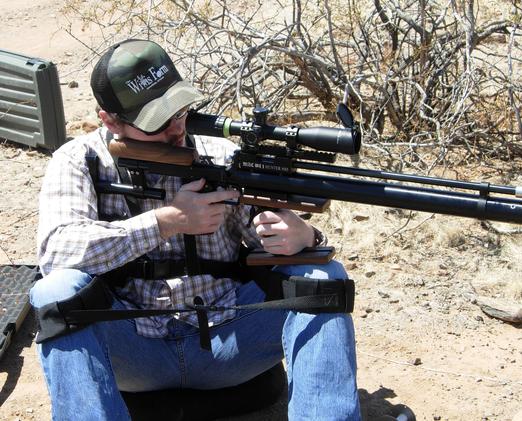 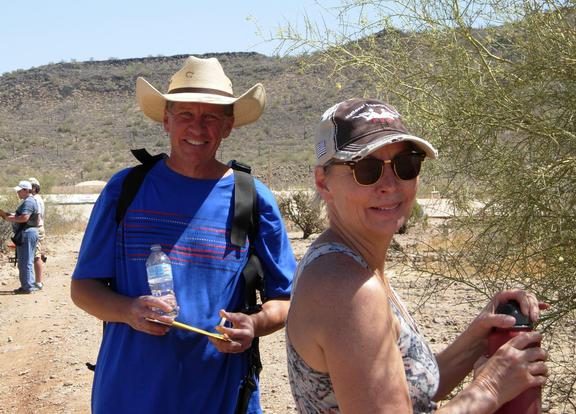 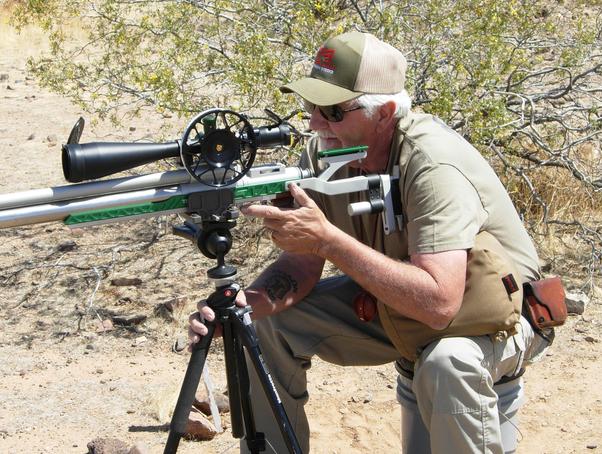 In freestyle class, Mike (the old man) took first with a 35 using his Thomas, Paddy O’ took second with a 33 and Wayne took third. 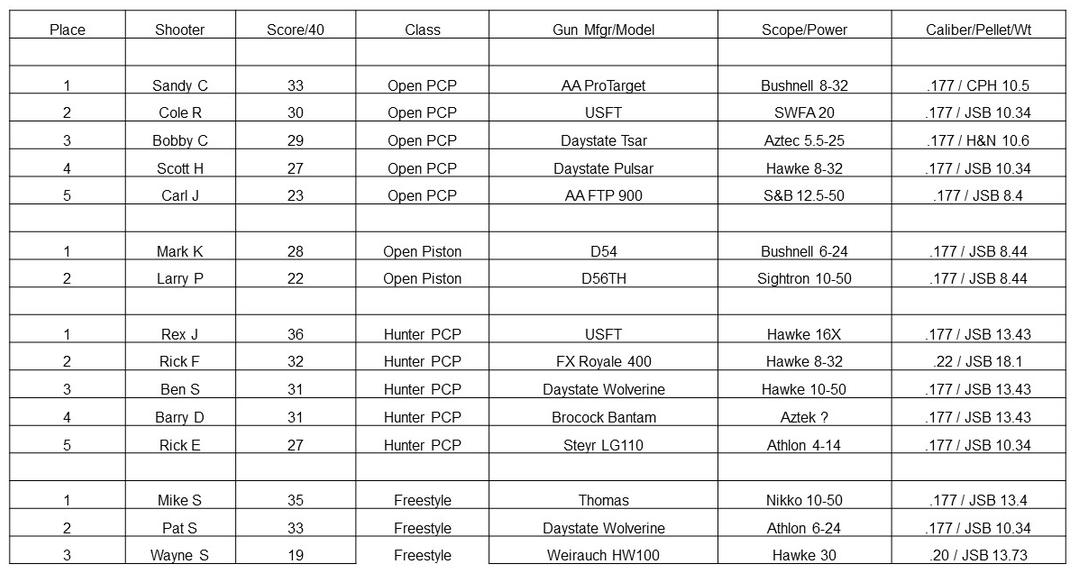 In Open piston, yours truly took first with a 28.  I used my D54 as built by Hector Medina.  I kinda screwed up in that I forgot take off my sunglasses and replace with my regular glasses.  Didn’t realize it until halfway through the match.  Slightly different prescription.  I mis-ranged 5 targets before it dawned on me.  Fortunately, I had some competition today with Larry shooting his D56TH (thanks, James).  As stated earlier, Cole, Rex, and also Rick E. decided to shoot PCP instead of their usual piston guns.  I think they have been corrupted by the PCP shooters!

Mark and Bobby.  Sandy swiped my camera as I was performing my photojournalist duties to snap our picture.

Rick got fried by the sun 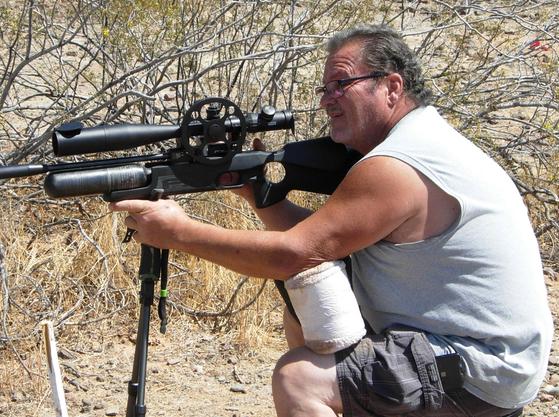 Cole shooting his USFT instead of his piston gun

Bobby adjusting the sights on his Daystate Czar 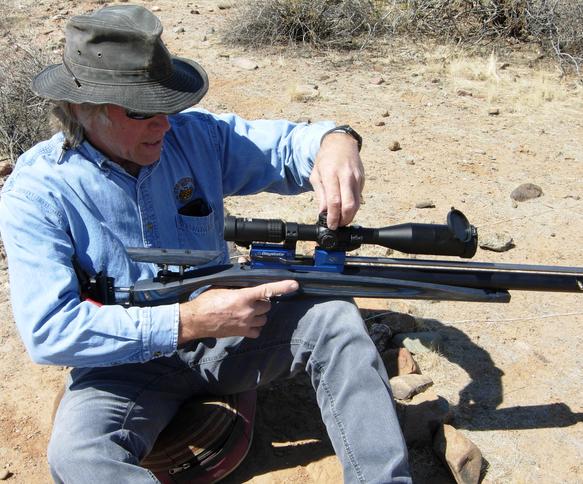 Carl and Sandy taking a break.  Sandy got quite a bit of sun during the match

Barry shooting his Brocock Bantam.  He took a little bit of sun today. 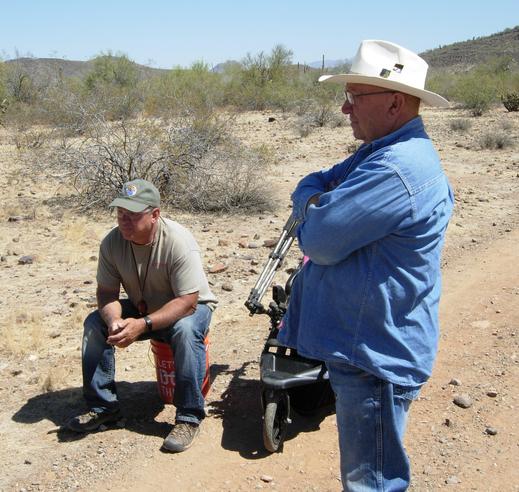 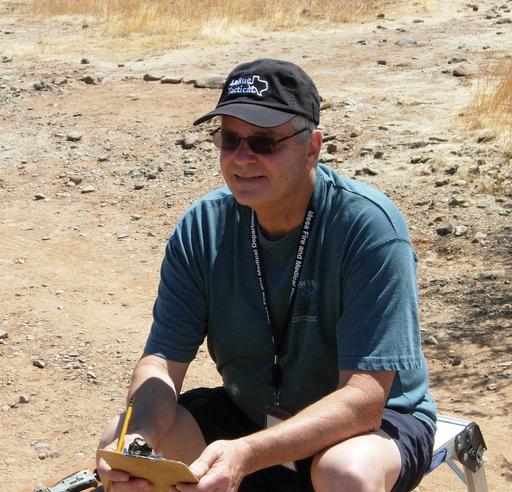 The skies were a very pale, light blue, that seemed to go on forever save for a little patch of high wispy clouds to the south and went on to the horizon regardless of which direction you looked.  A pale crescent of a moon was evident high in the sky even close to noon. The temps were in the low 60’s when we got to the range early and warmed to the low 80’s at the end of the match with a humidity is the 30-percentile range.  The area around the range is designated as a free fly zone and a number of vintage aircraft were flying about along with pilots practicing their aerobatic maneuvers, so we were serenaded by the sounds of airplanes throughout the match.  Neat stuff to watch also.

The wind even enjoyed being out and was quite playful.  It varied from being calm early on and then averaged from 5 to 7 mph during the match.  Average is anywhere from nothing to about 15 mph and danced around the compass points.  Initially it came out of the SW, then shifted to the NNE, then ESE, then out of the north, shifting to the east, and then the NNE towards the end of the match.  Gotta love the NWS (National Weather Service) for documenting all of this stuff.  My buddy, who lives just south of the range described the wind as “funny”.  He was raking leaves and the wind kept shifting and fighting him all morning!  To put it another way, bright sunshine + warm temperatures + exposed skin = sunburn!  Some of our shooters looked as if they got burnt to a crisp.

Larry and Rex waiting their turn to shoot

You have to laugh at some of the conversations that take place going from lane to lane during the course of a match.  I heard one shooter state that he was shooting at the female groundhog.  How do you know?  It is wearing lipstick and ear rings.  Someone else passing nearby stated, You can’t be sure these days!  Someone else was talking about electric wood.  I envisioned something completely different.  You often wonder what the laughter is all about, but just know that they are having a good time.

Here is Paddy and Wayne (I AM smiling) awaiting their turn to shoot.

Speaking of shooters, we had 15 of them today.  Number 16 is a bit miffed due to getting talked into helping fix his sister-in-law’s vehicle and then getting stood up!  And for one other member, I hope the garage sale went well.  Ya had to have it today, huh?

We had 10 lanes with two targets each situated on the west side of the two track in order to keep the sun behind us.  As such, the targets were well lit.  Mike showed up on Friday morning to help set the course which was calculated as being a 32.91 Troyer without the wind.  With the wind, it calc’d at 41.03 Troyer with the average distance being 31.5 yards and having a standard deviation of 6.39…..for those of you who actually give a rat’s a$$ about such stuff.

Four classes were contested today with Open PCP and Hunter PCP dominating the attendance.  In Open PCP, Sandy pulled out her AA ProTarget and shot a very respectable 33 followed by Cole with a 30, and Bobby with a 29.  I thought for sure that Cole was going to piston today. 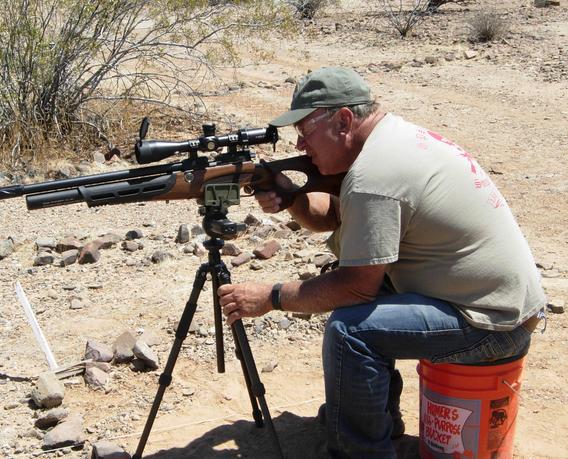 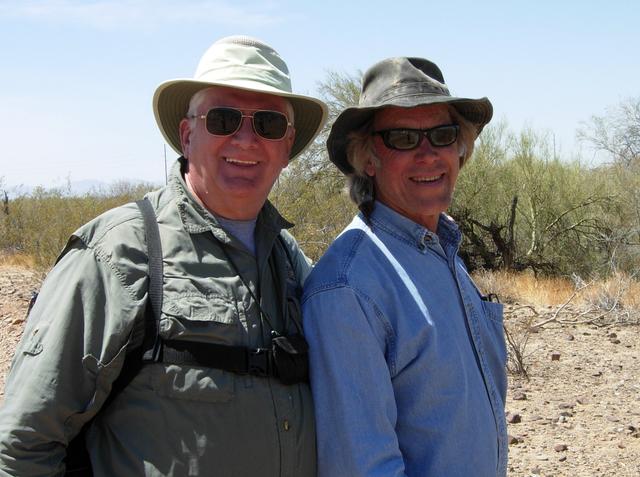 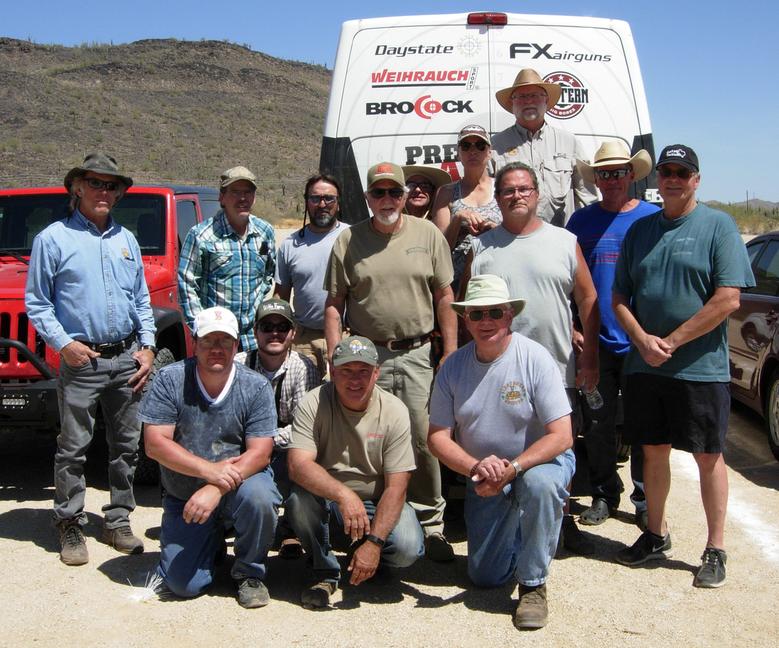 In Hunter PCP, Rex cleaned everyone’s clock by shooting a 36 with his recently acquired USFT.  I thought for sure that he was going to shoot piston today as well, but to no avail.  In second was Rick F with a 32 and Ben and Barry tied with 31.  These guys didn’t want a shoot off so they decided to break the tie by determining placement by who score the first miss.  Barry forgot his first miss was his first shot.  Oh, well…..