We were back in Camp Verde and once again Bobby set a terrific course.  Ten lanes with two targets per lane for a 40 shot competition.  Bobby calculated the course to be a 29 Troyer not considering the standing lane or any dark targets.  He also added a “side match”.  This was 5 lanes / one target per lane, with small kill zone squirrel targets interspersed throughout the course.  If there was time during the match, you could shoot on these extra lanes, or wait until after the match and try them all in sequence.  They were small and they were stretched way out there with the longest being a 1.25 KZ at 63 yards.  Devious is a good way to describe how Bobby’s mind works.  As things worked out, there was time to shoot these critters during the match.

We had 6 classes represented today.  Open PCP had 7 shooters with Doug T taking top honors shooting a score of 36/40.  Right behind were Carl and Bill tied with 35/40 which resulted in a shoot off.  Bill prevailed to garner second place.

Hunter PCP (8 shooters) was dominated by Ben S with a phenomenal 31/40.  Eric H finished in third, but was outshot by his cousin, Steve W who finished second and was shooting this game for the very first time. 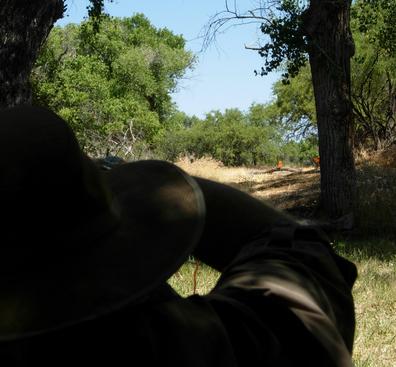 This is Doug on the firing line with the camera adjusting for brightness. 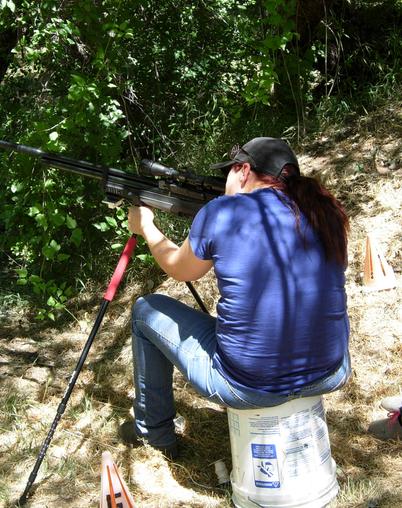 We had one shooter each in Open Piston, Hunter Piston, and WFTF.  We know that there are other piston shooters out there and are doing what we can to promote and encourage these shooters to come out and give this game a try.  In addition, we had four new shooters join us this month.  We actively welcome everyone who wants to come out and have some fun slaying the steel critters. 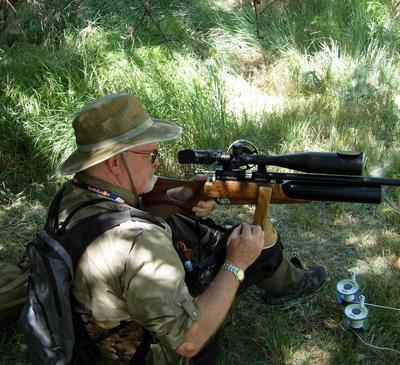 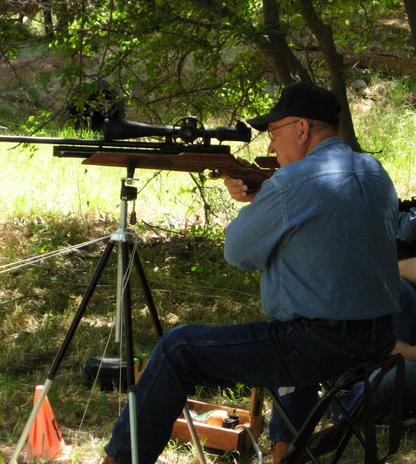 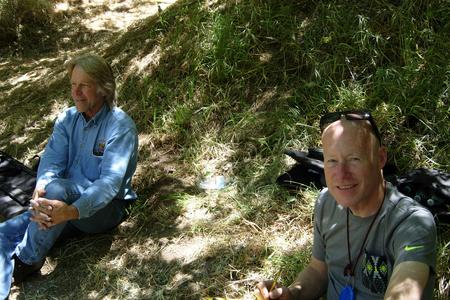 We had 27 shooters today!  All but three squads had 3 shooters per squad.  This gave us plenty of time to find the targets, analyze conditions, quietly chat amongst ourselves, and just plain enjoy the day.  Not too many pictures were taken because I didn’t want to disturb the shooters by traipsing back and forth while they were shooting, but I think I got a good representation of conditions.  It was just a delightful day to be outside. 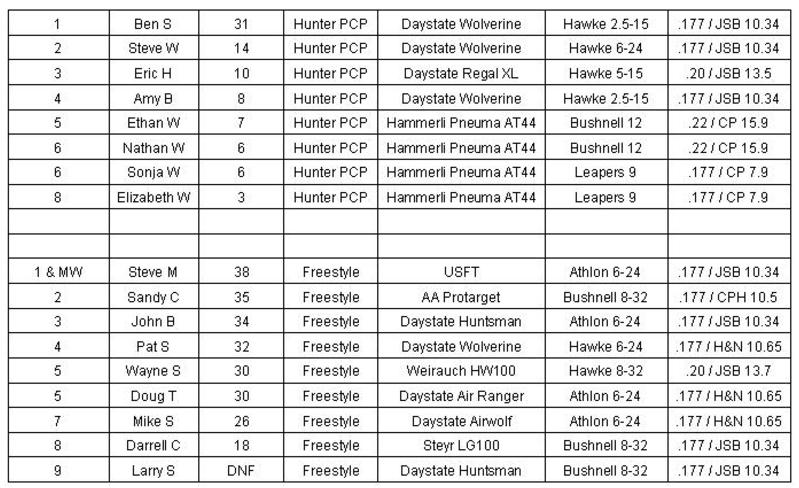 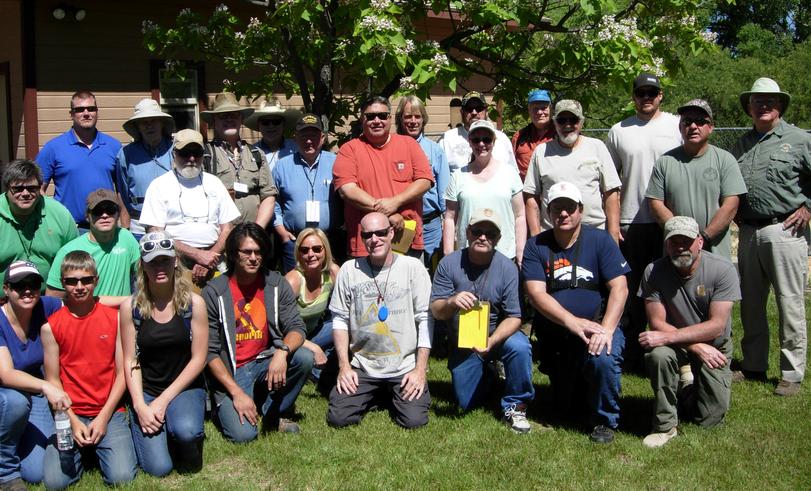 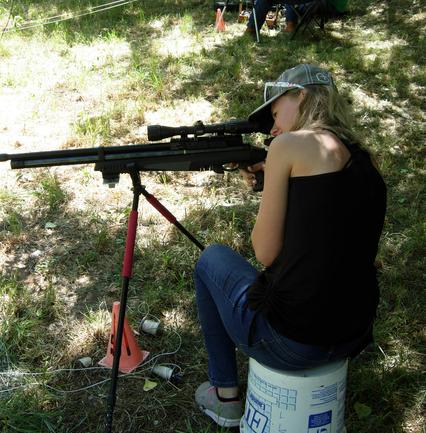 Sunlight and shadows.  That seemed to be the theme for today’s shoot; BRILLIANT sunlight and deep shadows.  Earlier in the week, Flagstaff (less than one hour driving time to the north) had snow!  The temperature here would eventually get to about 87 degrees at the end of the match and the wind was just about non-existent.  The NWS called for winds to be about 3 to 7 miles per hour, and it was that at times, but otherwise it was almost dead calm.  What was interesting was the mirage.  Focus on your target to get an estimation of distance, then turn your adjustable objective ring just out of focus so you could see the mirage boiling in the background.  Fun to watch, and at times it is frustrating to try to determine range and where to hold for drift.. 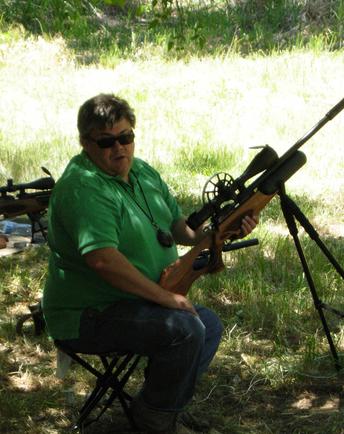 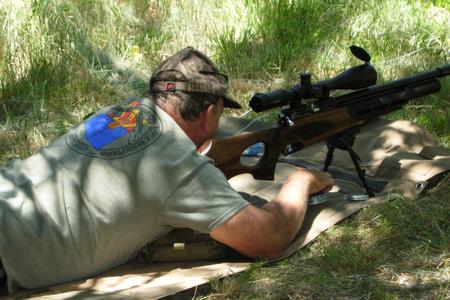 As a means of signing off, I leave you with the following; In between sight in and match start, and again after the match, while re-hydrating with a barley pop, one of our crew with a very active imagination came forth with the premise that a few of the attendees have a striking resemblance to some notable celebrities.  Ponder the group shot at the beginning of this report and see if you can find Bruce Willis, Chuck Norris, Sharon Stone, Johnny Depp, Harrison Ford, and……Papa Smurf.  Like I said, this person has a very active imagination that blends well with the fun loving atmosphere that prevails each and every time our little band gets together.  Brings a smile to your face every time.

OH, and the winner of Bobby’s little side match was Steve M, having knocked down 9 out of 10.  Bobby collected $2 from each shooter interested in trying it, then split the proceeds 60/40 between first and second place.  I don’t know who took second, but as stated earlier, Steve was on a mission this month.

After the match and while the score cards were collected and collated, Bobby and Sandy had a beef brisket smoking, and seasoned rice and all the other fixings for gluten free tacos.  It was wonderful!  Then they brought out home made ice cream and cobbler to top that off.  We cannot thank these two enough for their hospitality and wanting to share with the rest of the group. Our heartfelt thank you goes out to both of them from all of us 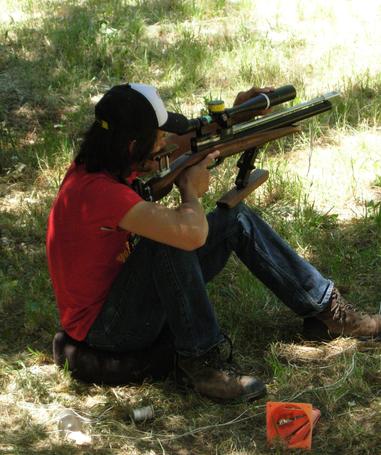 In Freestyle class (9 shooters), Steve M was on a mission.  He scored 38/40 for first and overall match winner.  Sandy C wanted to give freestyle class a try and finished second with 35/40, closely followed by John B with 34/40.  The rest of the shooters were all clumped together right behind the leaders.