Next month’s match will be in Camp Verde, AZ, about one hour north of Ben Avery shooting range. This will be a memorial and fun match in honor of a fellow shooter, Joe Gramant, who is no longer with us.  Joe had a flair for decorating targets, and as such most of the course will be in remembrance of his artistic abilities.

Also, Airguns of Arizona has once again graciously paid the range fees for our group shooting at Ben Avery range this month.  We are most appreciative of their efforts in supporting and assisting in expanding the sport of field target shooting.  Thanks Guys!

So, with the targets collected and stored until next month, the scores collated and awards presented, we headed our separate ways.  A few of us made our way back up to the Tennessee Grill for their excellent BBQ, although on this trip we now have four new little words to sum up the experience; SALTED CARAMEL CHEESE CAKE!       That is sinfully wonderful! Mmmm…Mmmm…Mmmm! 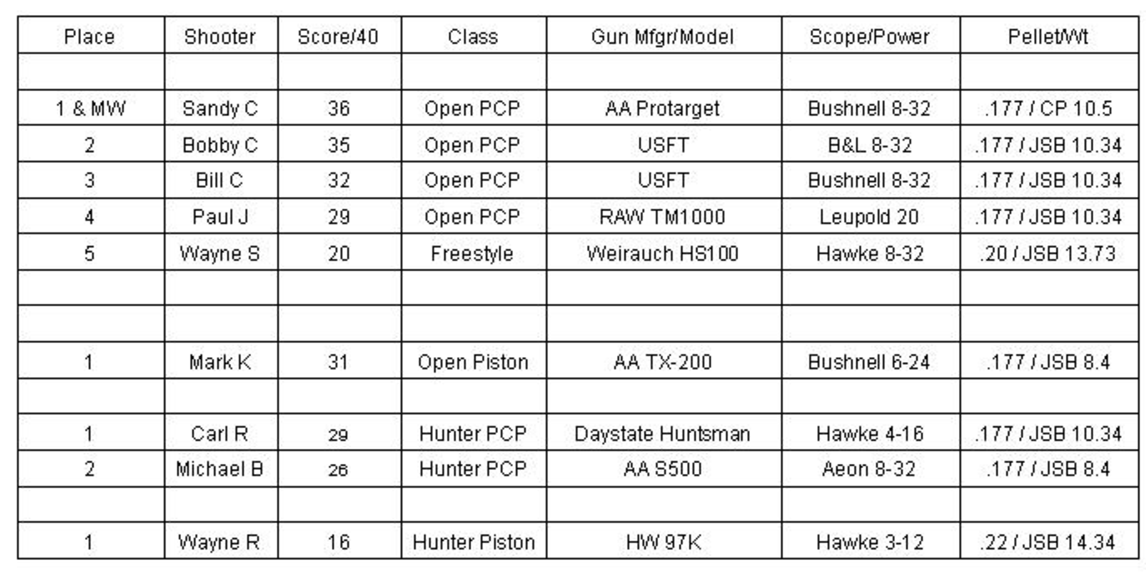 The March monthly field target match was a mixture of good news and bad news;

The (only) bad news:  The club photographer forgot his camera….again, and was relieved of his duties.  That would be…ME!

The good news:  It was an absolutely glorious day for shooting field target!  Upon arriving the temps were in the low 60’s with very little humidity.  How low, you ask?  There wasn’t a cloud in the sky!  As such, the sky was a pretty pale blue near the horizon and gradiated to a deeper blue the higher you looked.  The sun was beyond bright; it bordered on BRILLIANT!  Jeeeeez, was it bright.  I needed sunscreen on my eyeballs!  The wind was only a breezy 3 to 5 mph to start with, but increased to between 5 and 8 mph (guesstimated) with frequent direction changes.  At the start of the match, the temperature was a delightful 70 degrees and warmed to the mid 80’s by the end of the match.  I would post some pictures as vivid backup of this, but the idiot club photographer did not show up today.

The course was set up on Friday morning by Paul and Mark, who spent a few hours looking over what was available, and relocating both target positions and lane directions.  After determining the optimum set up, the target KZ sizes were calculated, the targets placed, and the Troyer factor determined.  Saturday’s match was calculated at 30.20 Troyer, not counting wind or dark shadows.  Please reference above paragraph with BRILLIANT sunshine and resultant pinpoint pupils to really appreciate the dark shadows.

We had nine shooters, no percentages, just REAL numbers.  We had 4 different classes represented and we had fun shooting.  We would have had 10, but one of our shooters forgot vital equipment and had to leave (not the photographer), and another was there despite the fact that it was his birthday.  Happy Birthday, Mikey!

There were a few missing, and a few others dealing with other issues (cheerleading, charity walk…….seriously???), and the flu took its toll as well.  Never-the-less, we enjoyed the camaraderie of those who decided to travel to join us.  Teasing aside, we always try to offer a quality product to those who cherish the joy of shooting and the fellowship of friends.

Sandy, Bobby, Bill, Paul, and Wayne made it a real battle in Open PCP class, with Sandy taking top honors and out-shooting her hubby by a solitary point.  The other scores were close behind, but “the girl” won it again.

In Hunter PCP, Carl and Mike were posting some good scores.  Carl, who traveled from Washington state to shoot with us (he does this frequently), edged out Mike, 29 to 26 to take the win.

Wayne and I were hoping for more piston shooters in Hunter piston and Open piston.  There is just something about the simplicity of shooting piston guns that make shooting that much more enjoyable.  We will both jump back and forth between our piston and PCP guns, but for today, the spring guns just called our names.