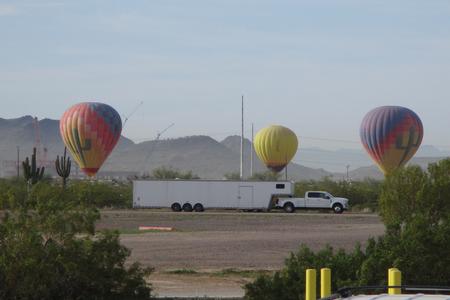 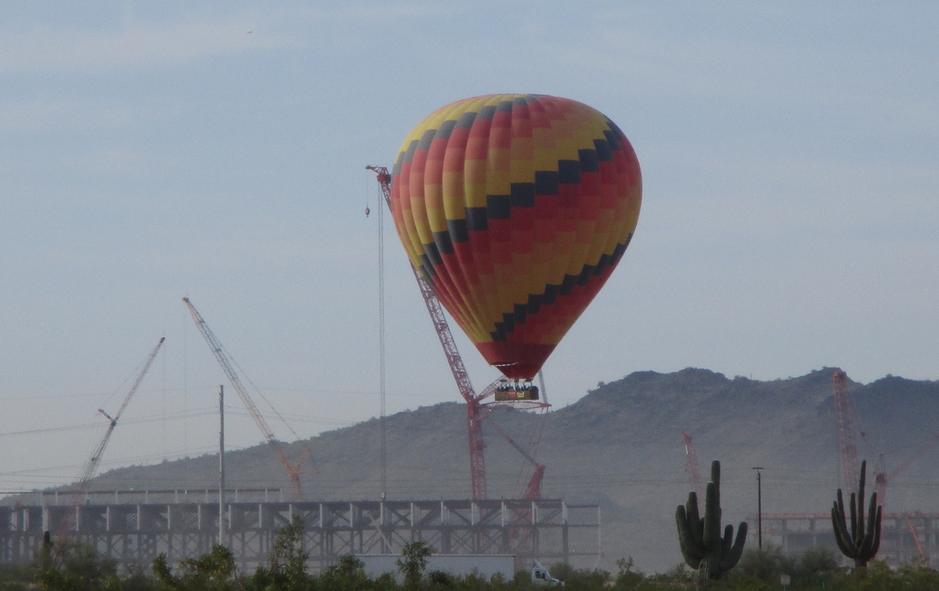 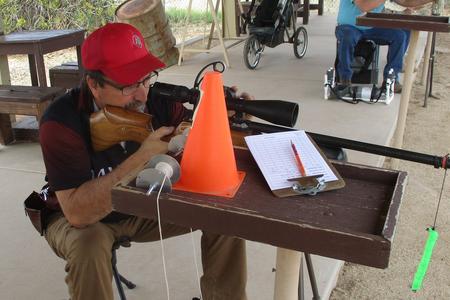 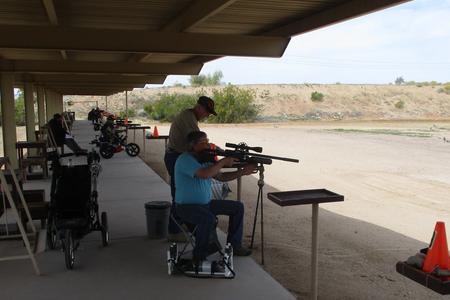 We had a tie for 3rd place, suggested a shoot off, or a coin flip, but eventually was decided by using longest string of hits in a row to decide placement.  This by the involved shooters themselves.  No drama this month.

Scores were announced, awards handed out, Targets and equipment collected, and we all headed out.  Thanks to everyone present for helping collect the targets and related materials.  We have a great bunch of shooters who are not afraid to chip in to get the job done, and we are appreciative of all of them.

Next month’s match will be April 16, same place, same time.  See you then.

Layout of sight in line

As the old saying goes, “March comes in like a lion, and goes out like a lamb” is certainly a true statement for us this year.  The weather earlier in the month (and so noted by the seniors in our club who shoot a weekly field target match) was cold, windy and sometime brutal.  But this second half of the month is becoming nice and balmy.  Spring is here with temps at the beginning of today’s match at 67° and warming to 76° by the end of the match, under bright, but mostly cloudy skies.  Even the wind today behaved itself, coming out of the southeast and shifting slightly while coming over our right shoulder and varying between 6 and 10 mph, with periods of relative calm.  Very nice shooting conditions.

Upon arriving on site today, there were 14 hot air balloons that dotted the sky to the south of us.  They drifted in a northwesterly direction and landed about ¾ mile south of us.  For their size, they appeared to be even closer, but were indicative of what we were expecting the weather/wind conditions to be.

10 shooters were on hand today to shoot the 12 lanes / 2 targets per / one standing lane / 48 shot match.  We were missing some of our usual suspects today, due to entertaining family in town, out-of-town on business, or, in the case of inspector Callihan, appeasing his wife by taking care of honey-do’s around the house…..finally.  Current gas prices are also a consideration, but those of us that did gather to shoot, had a good time doing it.

Only two classes competing today.  Yours truly was the solitary open piston shooter.  Everybody else was shooting Hunter PCP, with two-bagger Mike leading that charge.  He put a new barrel in his gun, shot it for the first time, and still managed 47/48.  Tattoo Jesse, got the bugs worked out of his new scope and was right behind Mike with a 45/48. 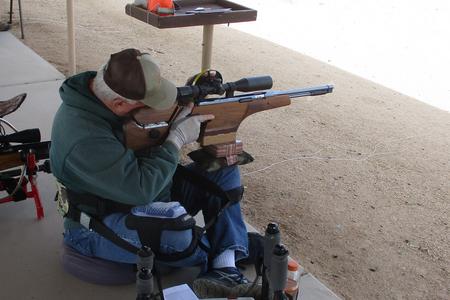 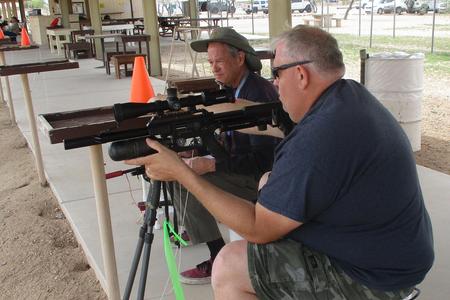 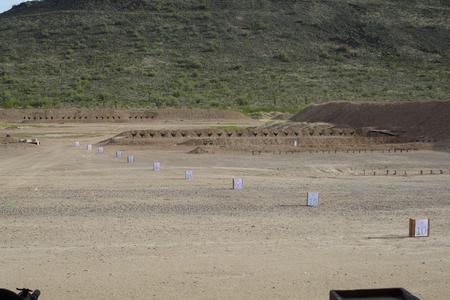 Balloon in the distance 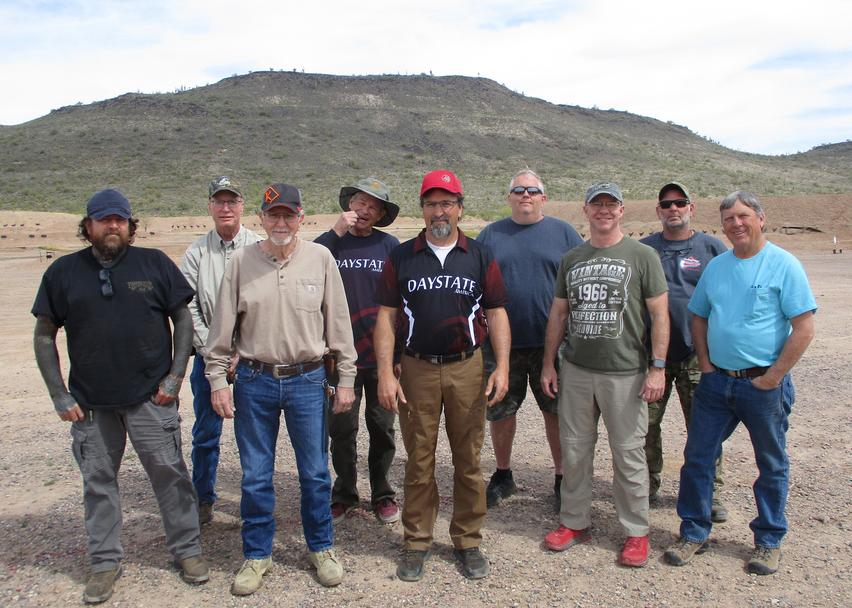 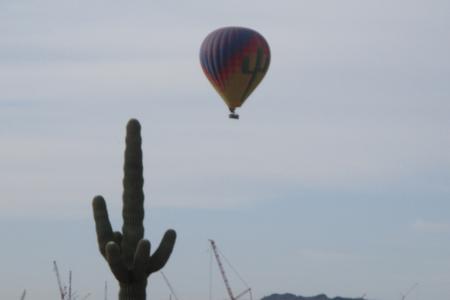 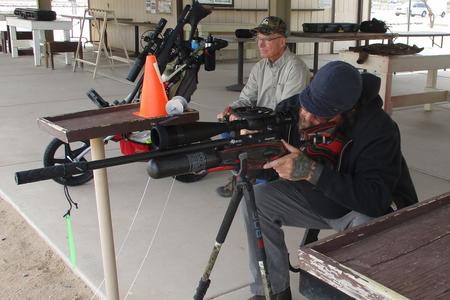 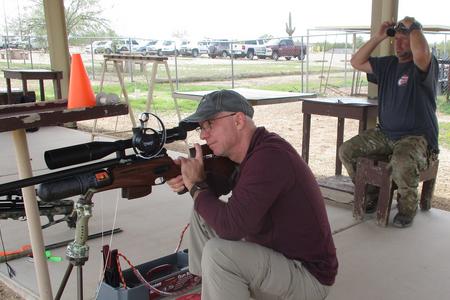 The firing line, under canopy. 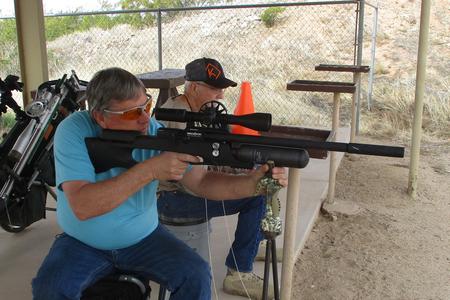