Wayne M shooting with Stephen scoring (the mustache is the hint)

Todd and Mike (trying to hide)

Stan setting  up with Nathan in background 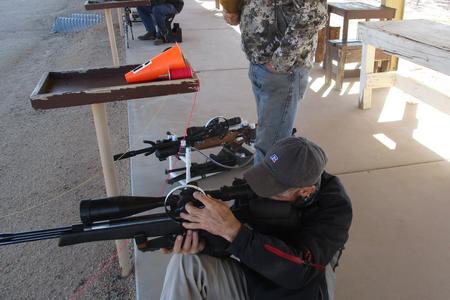 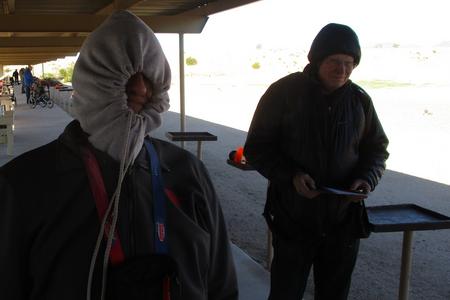 Jake shooting, and Martin, who I chopped in half, scoring 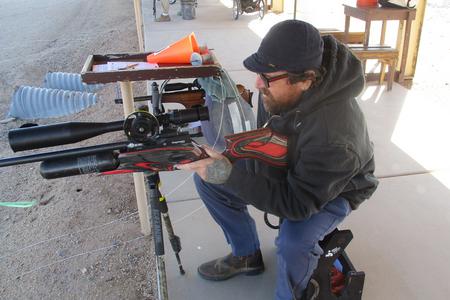 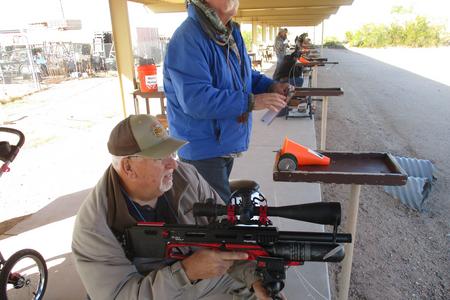 Over time I have come to rely on the National Weather Service for their weather forecasts when “attempting” to plan for an upcoming match.  I plan for the worse, but hope for the best.  Today’s forecast called for 10 – 15 mph winds with gusts to 25 mph.  I don’t know what kind of voodoo they practice, but they come close from time to time.  Fortunately, today was better than predicted.  We “only” had 9 to 13 mph winds and the gusts varied from 16 – 21 mph.  It would die down towards the end of the match to only 6 – 9 mph, and, of course, just after the match concluded, it was almost dead calm!  Go figure….  Fortunately, the wind came from predominantly the NNW direction, after swirling around the face of the hillside in front of us that the range uses as a natural backstop.  “Swirl” is the operable term to be used to describe this.  “Squirrely” is another good term.  A few other colorful euphemism’s have been used in the past, as well.

The skies were a pale blue, with no clouds and just of bit of distant haziness, possibly from blowing dust.  The temps ranged from 64° up to 70°, but with the winds, felt much cooler.  You can see from the pictures and the way the guys are bundled up, that they felt the chill.  You can also look at the windicators on the rifle barrels, at the direction and ferocity of the wind, and the way it buffeted us.  Yeah, another fun day.  I am beginning to believe that Mother Nature’s first name is “Martha”, but did not hear anyone complaining to her today.  Curious….

We had 17 shooters today for the week before Thanksgiving.  Several came down from the north country (Flagstaff area) to our “warmer” climes, with Cole and his young son, Colben, joining us as well.  This little guy is just a joy to watch shooting.  His dad taught him well and he needs no prompting when setting up or taking his shots, and he shoots VERY WELL!  He is going to be a force to be reckoned with as he gets older.  Heck, he is shooting very competitively now!

We set up our usual 12 lanes, with 2 targets per lane for a 48-shot match.  The orange plastic cones that we use to designate shooting lanes, had to be weighted down with rocks inside them because they were being blown all over the place no sooner than they were set in position. 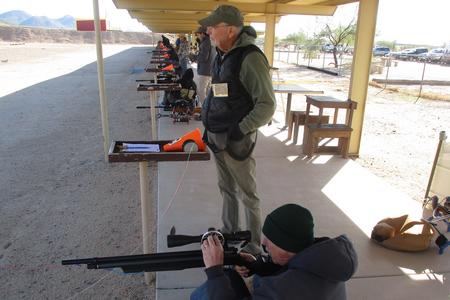 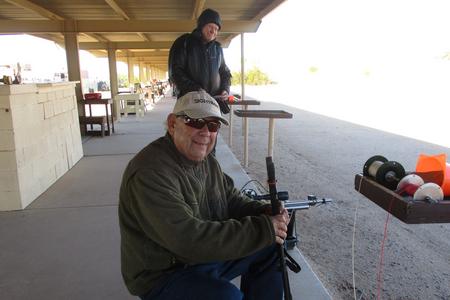 We have to thank everyone attending for jumping in and help setting up and tearing down afterwards.  We have been doing it for so long (especially at our weekly TRAC matches) that everyone knows what to do and just go and do it.  We don’t thank them enough, but want to recognize them for their dedication.  We arrived this morning by 7:30 and by 8:00 the course was already set and we were ready to go.  Once the match concluded, the targets were taken up in no time.  The activity becomes much more fun when everyone pitches in.  Thank you guys! 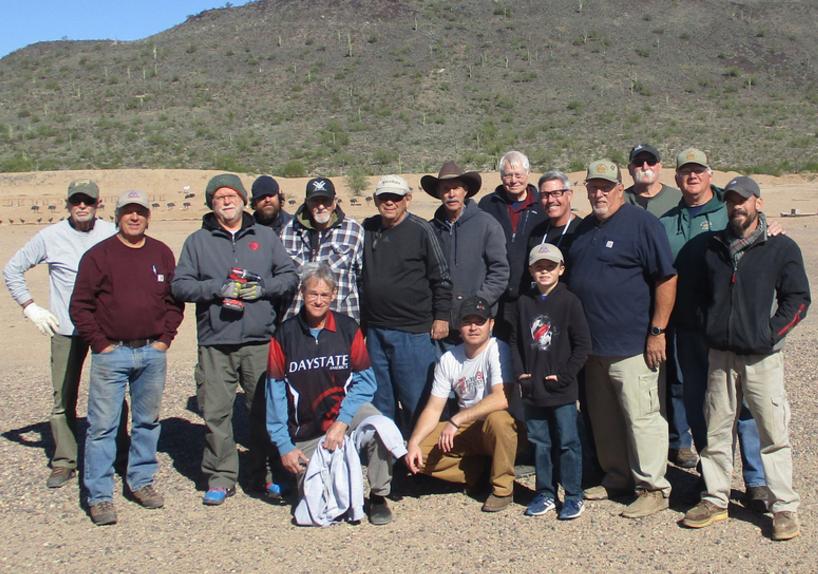 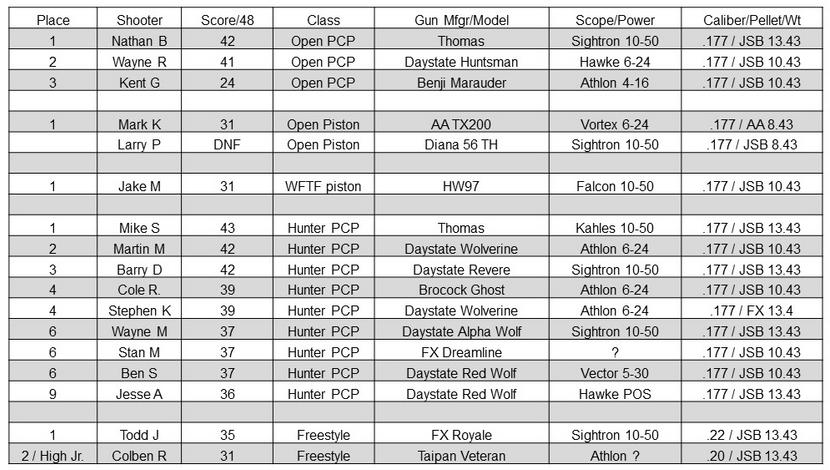 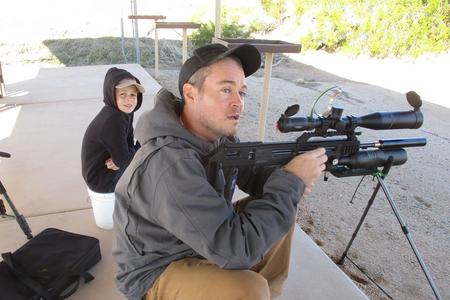 Colben and his dad, Cole. 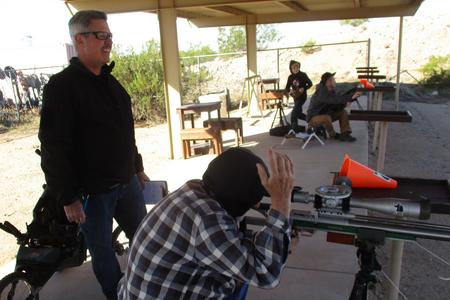 That is Barry behind the puckered folds, with Nathan to right. 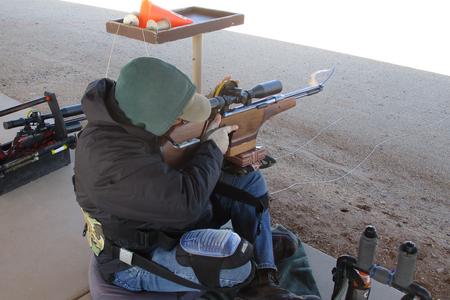 Ben is scoring for Larry (bundled up) 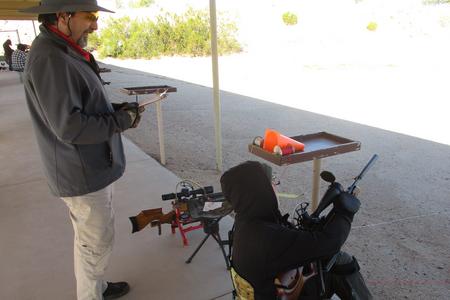