No Equipment stats available this month

This month's match operation was left in the capable hands of SteveM and WayneS while I was off playing hookey and shooting my piston gun with Scott and his merry band of "sproingers" (aka; spring piston airgun shooters) in California.  I had a good time, shot with some great people, enjoyed the wonderful weather, ate, drank, plinked, talked airgunning, and otherwise thoroughly enjoyed myself, and made some new friends to boot.  I did miss the troops at home who were also shooting this weekend.

As mentioned, Steve and Wayne did a great job of handling everything to give me a break, and here is Steve's match report writeup.

Pictures courtesy of Amy, Ben, and Doug.  Thanks guys! 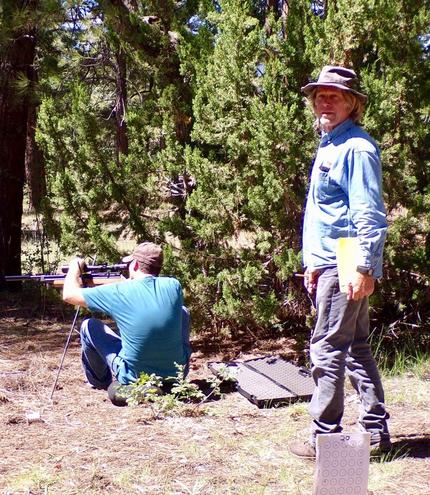 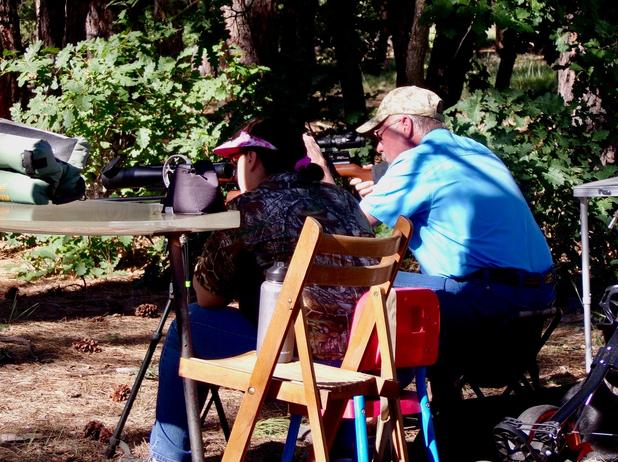 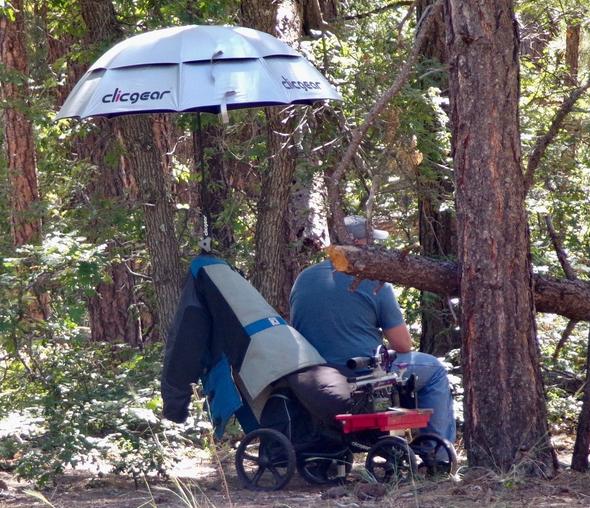 I didn't shoot that well in Mormon Lake, but that doesn't help when Mike and I do our usual thing of doing mandatory shots. This time we did 1 kneeling lane chosen at random and 2 standing lanes.  One standing lane was the one with the 3/8” kill zone at 10 yards and a 1/2:” kill zone at 14 yard.  Mike and I tied on that lane with 2/4.  Knobs got 1/4.

Knobs had his A game working, and Mike and I just….. shot...hahaha!   Dr. Doug was high score with a 45/48.  Bobby was second with a 44 and Sandy was third with 41/48.  It was a good time with great weather, a little warm, but nice and light variable winds that made it a little challenging on the long shots. Wayne and Steve ran the match and it went well.  We must have had 22-24 shooters, <Edit; 20 shooters> and everyone had a good time 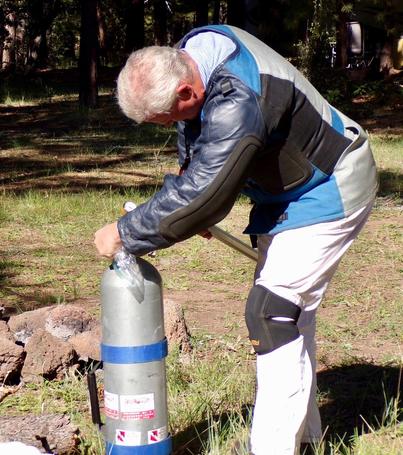 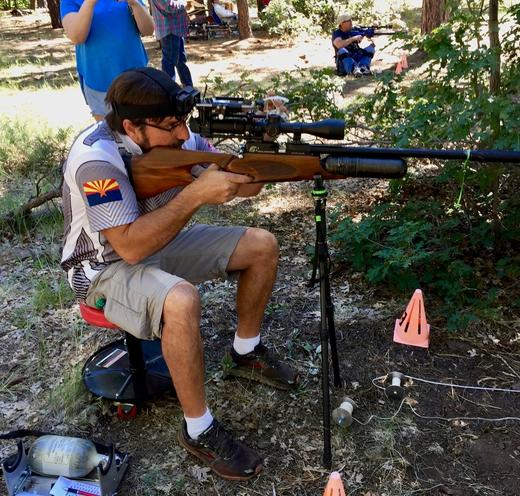 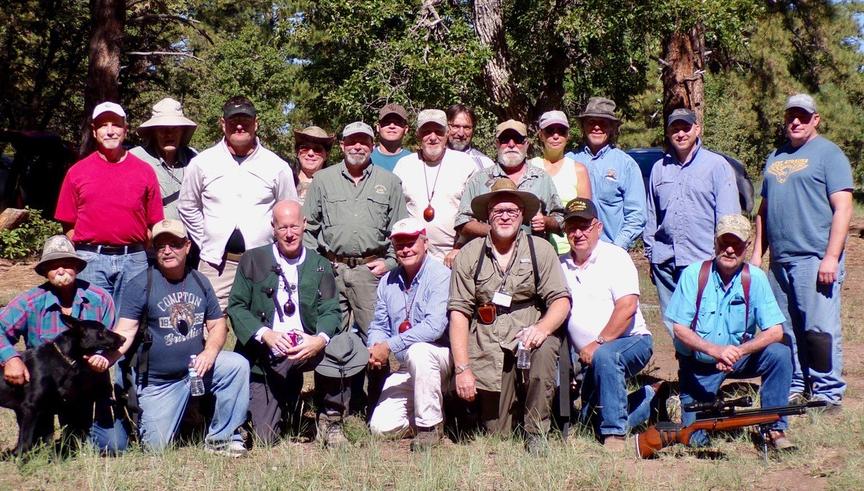 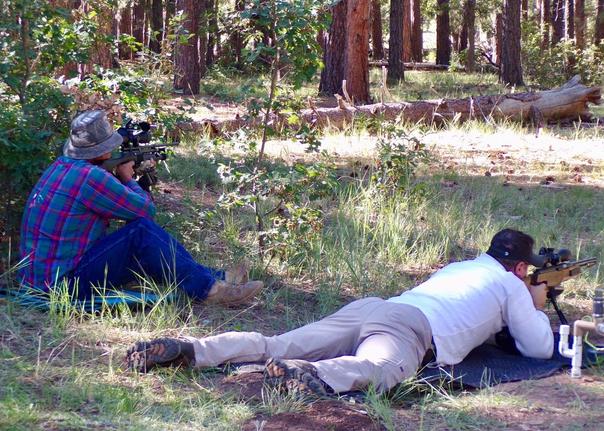 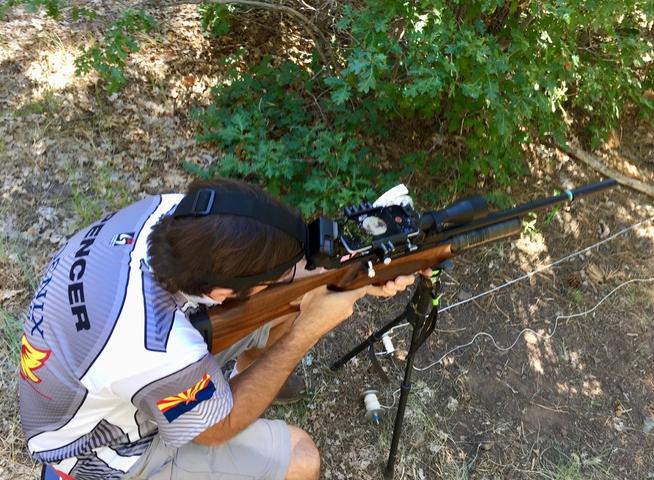 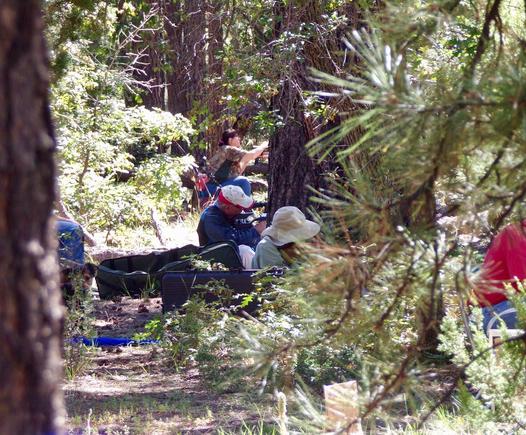 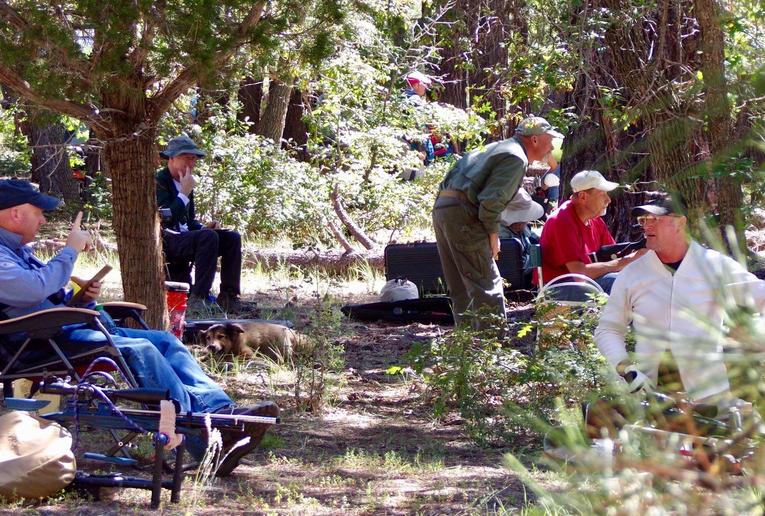 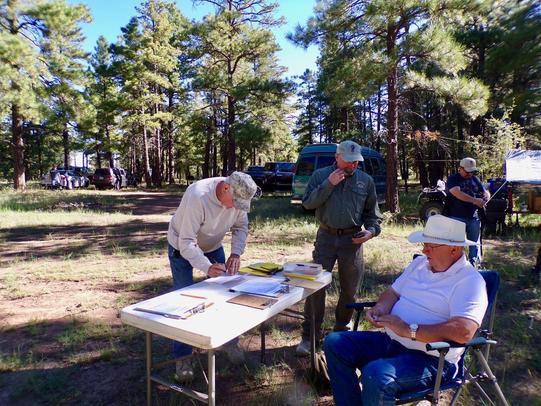 BillC also added a little blurb on his take of the festivities.  Here is Bill's input; 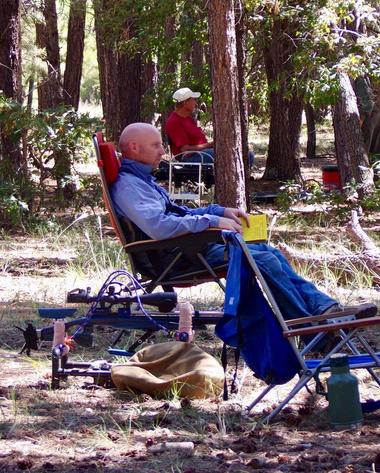 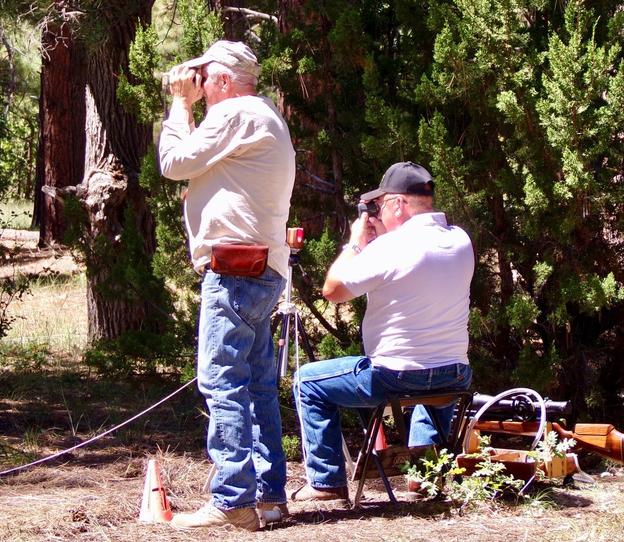 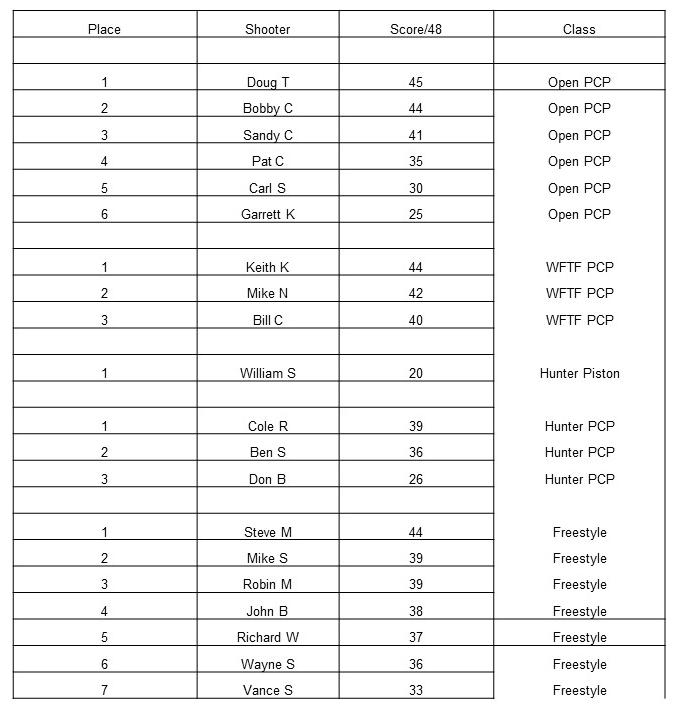 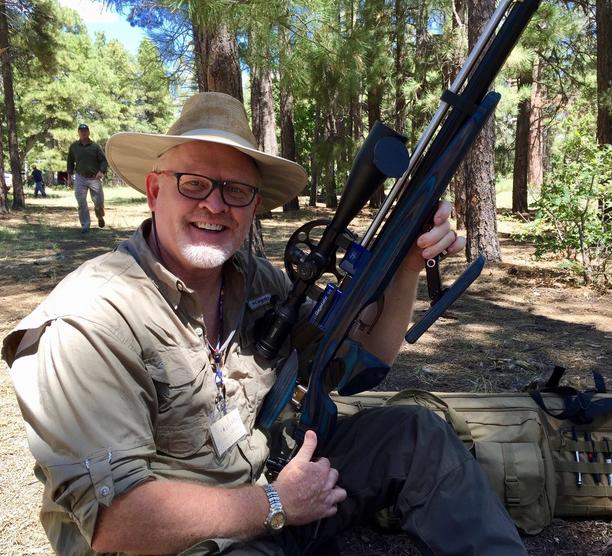 Pulling our travel trailer Robin and I arrived Thursday evening to see faithful travel trailer camper Wayne and Lynnette in their usual spot, with ATV Don and Show Low Cole already on site too. All of them had set up their own sight in lanes and Cole was clanging his nice ringing saw blade target. It seemed like we had just got there even though a few hours had passed, the sun had set, the night fell and temps cooled down. """Finally""" the fire restrictions allowed campfires which hadn't been the case for us all summer, YAY! We enjoyed for dessert the decadent taste of pudgy pies, which consists of two pieces bread buttered on the outsides and mixed berry pie filling in between, cooked to golden brown in the special sandwich irons over the fire, then topped off with brown sugar and cinnamon. Yeah, it tastes much better than the description eludes, really just like a pie fresh out of the oven! See what all those that don't camp miss out on! Come join us!

Friday morning came and fending for ourselves this month since our fearless leader and club secretary Mark Kauffman (that means he does more than his share of work and sometimes a thankless job-hint) was in Cali at a springer match. Wayne/vice prez and myself/match director went about as normal with recruits Don and Cole helping set up the course, finishing up everything but the main sight in area, Pat from Las Vegas showed up just in time to take on that responsibility. Special accolades to Don who had some very good ideas for target placement which made for extra fun and challenge. Thank you guys for helping out! We missed you Mark and more so this month appreciated all your hard work!

Friday afternoon till dark a bunch of us plinked and plinked and plinked. We shot all kinds of airguns on reactive steel and paper. Did the same Saturday afternoon too. That's another thing those of you that aren't camping are missing out on. But we had a good time enjoying each other’s company just as much as the shooting. Laughing is good for the soul and we laugh a lot!

Match day weather report; As per the previous months in summer 2017 here in northern AZ at our Lake Perry pit location the weather was just wonderful! I didn't have a thermometer but it felt like low 80's as the high, mid 50's low and seldom a cloud. I needed a light jacket first thing but within an hour it was off. During the match, the wind was low and once again taking a guess at 0 to 6 mph with a switch in direction once in a while. Basically, one couldn't expect better weather!

I can see why Mark uses his horn to get people gathered around for the 9:45 shooters meeting, lol. I have a quiet voice and shouting as loud as I could it took calling out twice and help from others to get everyone together. BTW I'm not the least bit offended because I'm usually talking away as well when Mark sounds his horn and he typically sounds it off a few times to get me over there. Ha, One reaps what one sows. Mark and Larry seem cut out for this type of thing. Sorry, I wish I was better with this stuff but I tend to be shy around crowds.

We shot another 12 lane/48 shot course this month and most were done shooting by 1:00 or so. The most interesting lane for me was a buzzard target with 1.5" kill zone up on top of a broken off tree at 21Y to be shot offhand or kneeling and this target was also a used as a tiebreaker. Farther down that same tree was a 3/4" killed zone woodpecker. I held over with the reticle for the entire match just to try something different this time. I think I held the wrong line ??? because I missed the woodpecker both shots but at least I did hit the buzzard once. I remember thinking to myself - how quickly things can fall apart, lol.

The match seemed to go by smooth and fast this time. Troyer factor isn't calculated yet but I'm going to guess it was higher than the previous matches this year. <Edit; Troyer calc’d to 31.43 with info provided> Our club has a lightheartedness to it and everyone is friendly so we all hung out while scoring and talking to the others in the lanes immediately to the left and right. Too my left I noticed Bill, Mike and Keith taking positional shots for the fun of it. Anyhow they weren't bothering anyone and were waiting on the guys in the lane ahead to finish so they got in some good practice for the big matches and had fun doing so.

Doug, Ben and Amy did video filming during the match which didn't seem to delay the match at all either. That'll be neat to watch when they have it ready!

Thanks to Wayne, Don and Cole for helping pick up the course, Amy for taking the pictures, and thanks to all who attended! 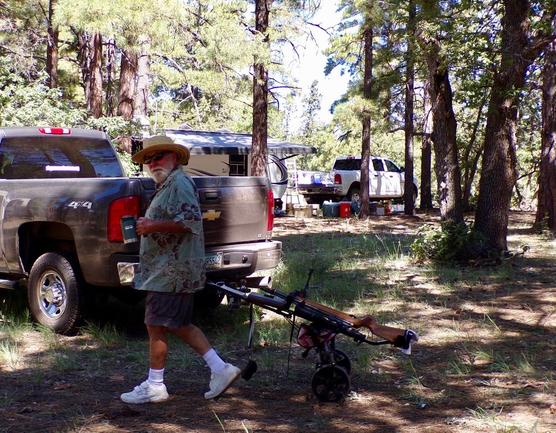