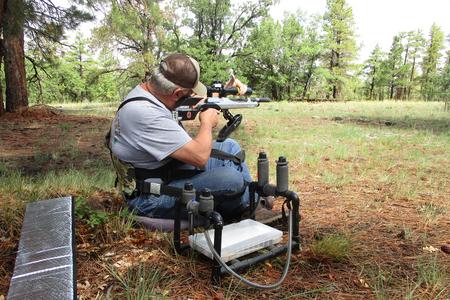 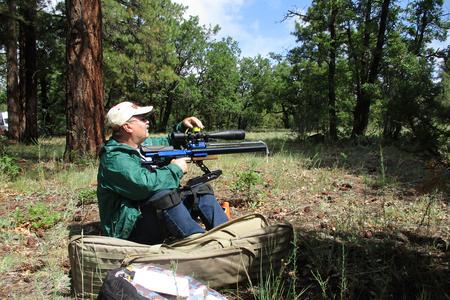 After having to cancel the June match due to the closure of the national forest and Stage III fire restrictions, the July match was preceded by several days of  heavy rain and thunderstorms throughout the area.  We converged on the venue on Friday at noon with our fingers crossed, and that we would be able to pull this off.  We drove through some heavy storms just to get there, and were greeted with wet and muddy conditions that prompted us to move the course site to high ground.  This was also a no-brainer due to the fact that one visitor to the site (this is the national forest and open to anyone, regardless of whether we have a permit to be there, or not) had his camper set up smack-dab in the MIDDLE of where we normally assemble and work from.  The gravel lanes leading into the area were deeply rutted and water filled (read "mud").  We taped off the access, with yellow caution tape, to keep any of our crew from driving in and promptly getting stuck, and set up on the hard-pack parking area that was 50 yards in from the gate.  Lucky that we did, as it kept on raining.

Eight of the guys answered the plea for assistance and showed up to help set up the course.  Larry, Barry, Bill, Pat, Kent, Bobby, Van, and Nathan coordinated to set 12 lanes with 2 targets per lane on the north side of the muddy driving lane ingress, whta was not taped off.  The hard pack parking area  was off to the west with easy access to the course, which was sloped slightly upward.  The firing points from lane 1 to lane 12 were set in a slight inward facing arc.  We were hopeful that any rain runoff would be downhill and away from us.  This was easy to determine due to the fact that it was still raining, sometimes heavily, during this two hour time frame.  The weather forecast called for 90% chance of heavy and thunderstorms throughout the weekend.  As I have heard in the past, "If it ain't raining, you ain't training"!  Needless to say, it rained the whole night.

Now that the stage has been set, let's move on to Saturday morning.....

Saturday morning "dawned", looking much the same as the day prior.  Upon arriving on site, the skies were heavily clouded and it was misting.  We had a total of 14 shooters on hand with more than a few no-shows.  The temps were in the mid-50's and warmed into the 60's with humidity in the 80% range, but dropping into the 60% range as the clouds broke adn blue skies and sunshine gradually filtered in.  It would stay like that throughout the match.  It was almost miraculous that the day would develop like this.  Mother Nature must have smiled on us.

We contested four classes today with some great scores at the top end of each of the classes.  In Open PCP, Sandy C. scored 47/48, with Nathan B scoring 44/48 behind her, and the other 4 shooters in the class closely clumped behind that.

Understand, with the rain having stopped, the grasses that were laying down, were now coming back to life, and there was a lot of "stuff" standing between the shooter and the target, which did deflect some of the pellets.  The light winds that came in from various angles throughout the shoot, were filtered and negated by the trees, thus minimizing that element..  The Troyer factor was only 25.27, but don't know how to figure in "obstructions".  All in all, it turned out to be quite a delightful day, considering that we were expecting the worse. 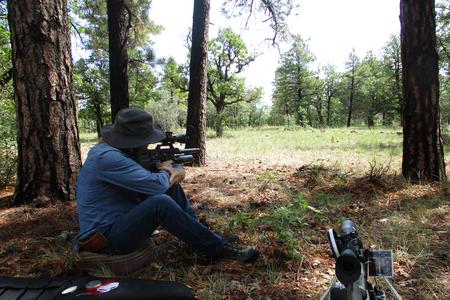 At the end of the match, we collected all the targets, blocks, clamps, and strings prior to the afternoon rains that we knew were going to come.  Then we sat down to Kents amazing chili!  He made a BIG pot, enough for a small army.  Everyone sat around afterwards and just enjoyed the remainder of our time together.  Scores were announced and awards were handed out as we sat in amazement of being dry!  Understand, we don't get a lot of rain in Arizona and enjoy it when it does rain.  Usually a storm rolls in, it rains for 20 minutes to half an hour, and then it moves through.  This latest batch has lasted several days in a row.  It is currently raining in Phoenix as I sit and type this.  With over 30 separate major wild land fires in the state, and two firefighter deaths in the past month, we really need this rainfall, and are thankful for it.

Gotta thank the guys that helped set up the course and everyone who helped tear down and put everything away.  Big thanks to our treasurer, Miss Moneypenny, for taking registration and for taking the action photos.  Her son, 8-year-old Sam, was on hand to assist, and also learned how to tie a survival bracelet with paracord in the process.  Thanks also to Kent for that big pot of chili.  That was wonderful! 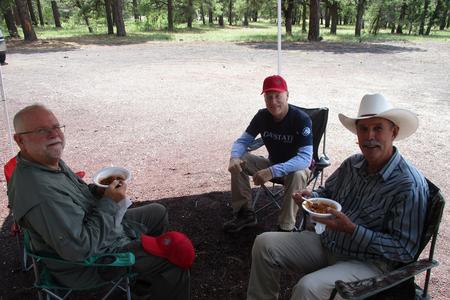 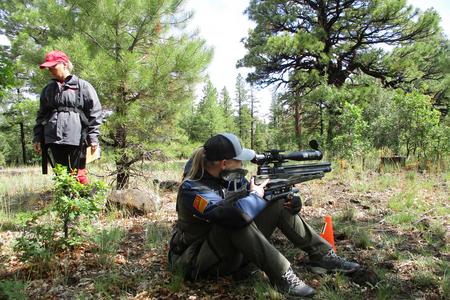 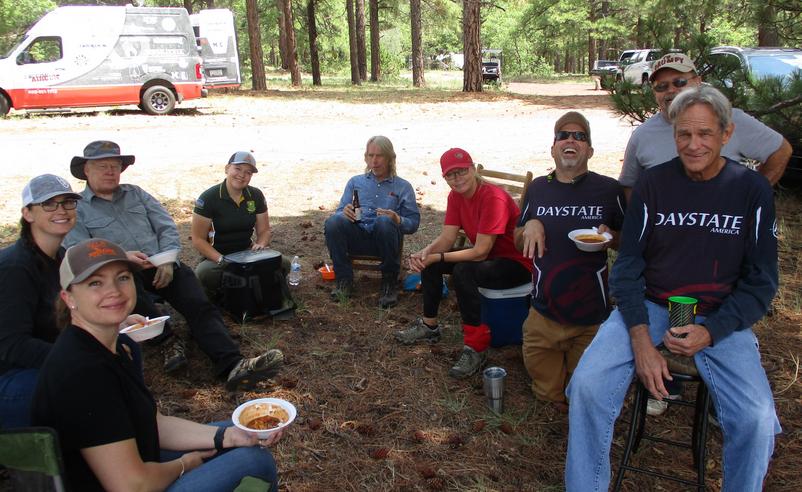 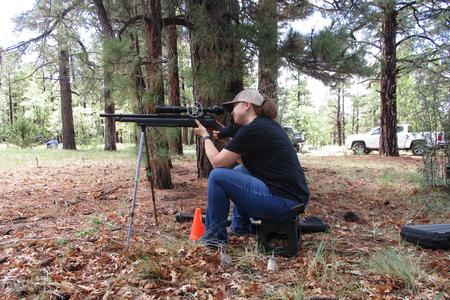 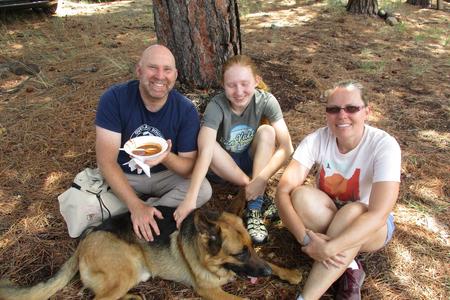 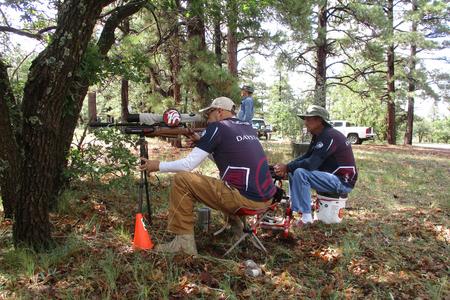 Larry, Bill, and Kent chowing down 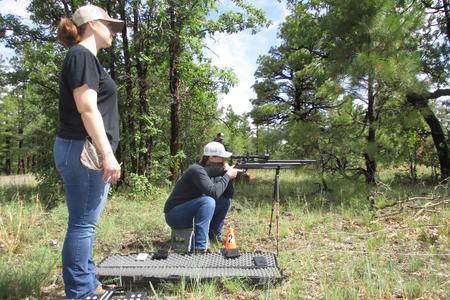 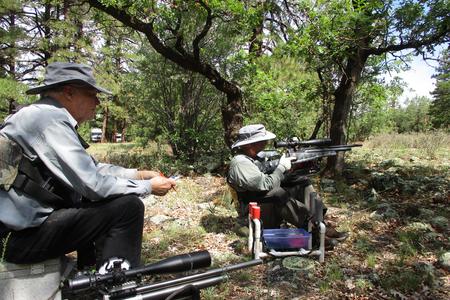 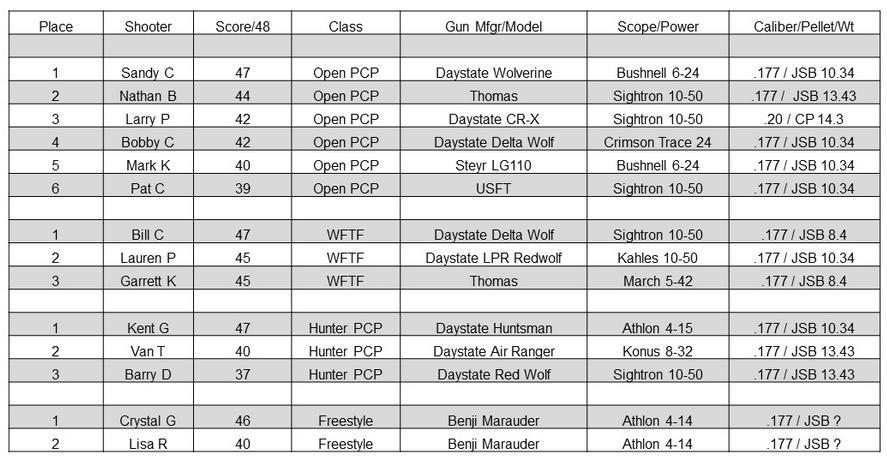