Mike and I met at the range yesterday and painted a bunch of the targets in preparation for todays match, but after chatting, decided to only set 10 lanes, with 2 targets per.  The range we got bumped to is narrower than the pistol silhouette range, and with the course layout and the sight in targets in place, we were spread from berm to berm anyway. 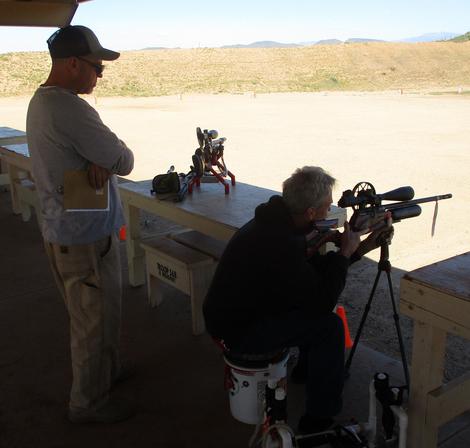 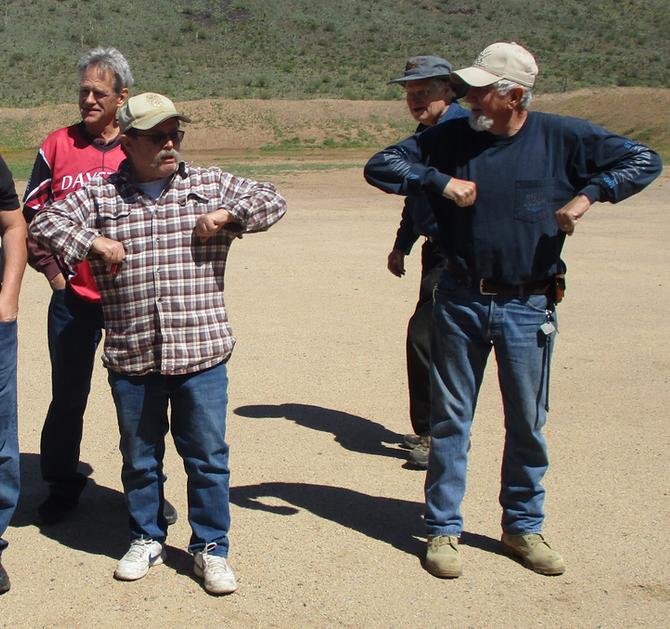 Move along, nothing to see down here.  The report is up above. 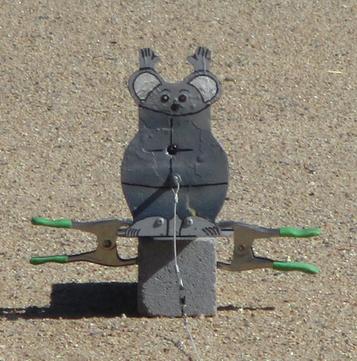 That is what one of our crew decided to call the match this month.  While everyone else, it seems, is quarantined in their homes, 9 of us decided to quarantine ourselves at the range.  Yes, we practiced social distancing and instead of shaking hands, we did our elbow bumps.  The closest we got together was during the group photo.  We were missing some of the usual suspects, but that is understandable considering what is happening these days.  I thought about giving out toilet paper as prizes, but my wife would have killed me!

The course was calculated to be a 32.65 Troyer without wind.  This was determined with the NWS service forecast in mind which stated mild to calm conditions for today.  The temps were perfect in the high 60’s which warmed to about 70 by the end of the match.  The skies were clear after some early morning high clouds to the far north of our location, and the sun was bright.

The Joker today was the wind.  Whereas we try to play the wind, today it played us…..in a game of hide and seek.  That is the only way to accurately describe it.  It started out coming from an easterly direction, picked up, slowed down, then shifted to straight on out of the north.  Before we knew it, it had shifted around to come out of the south, then southwest.  It would blow intermittently, they stop dead, only to buffet us without warning.  Some of the language that I heard…..and contributed to…..was “colorful” at times.  It didn’t seem to exceed 10 mph, but was not consistent in velocity or direction.  As stated many times in the past, the winds at Ben Avery range are renowned for driving you nuts, and this because of the geography of this piece of land. 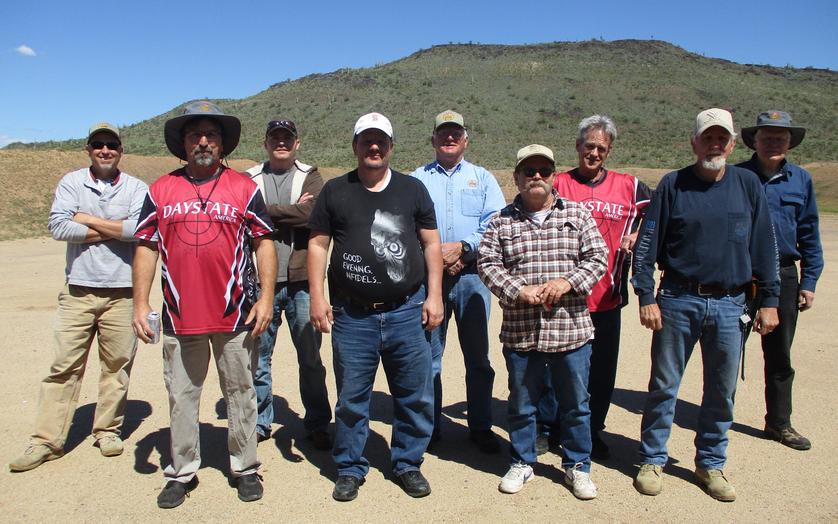 The sight in line 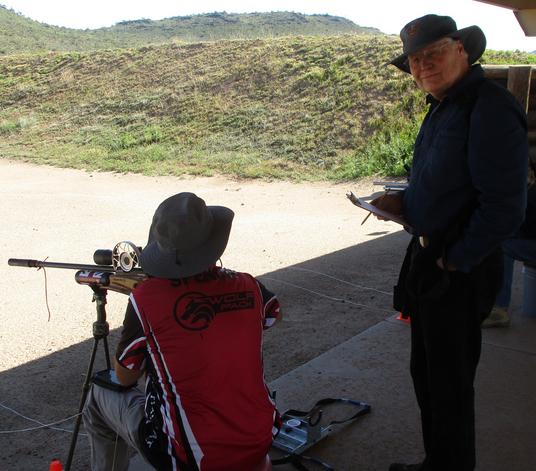 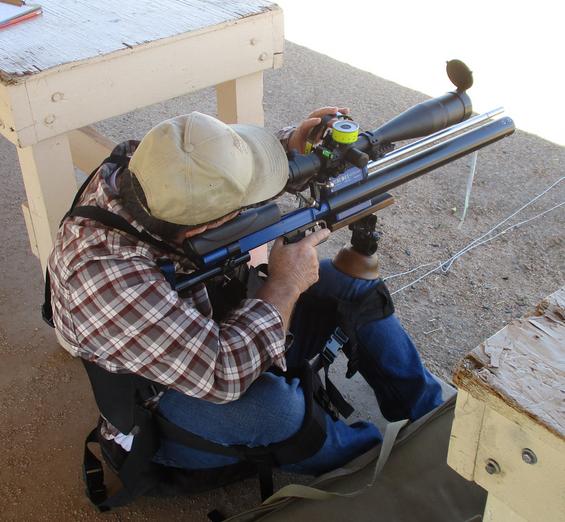 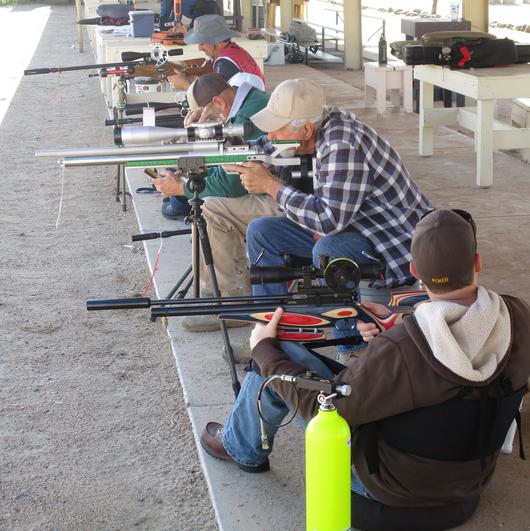 The adjusted Troyer with wind was 40.5, with the easiest target at 30T and the hardest at 50T.  It was challenging, but it was fun, especially when you nailed a distant target by guessing correctly.

I was hoping that Cole would bring his springer, but again yours truly was the only piston shooter.

In Hunter PCP, old man Mike was top dog shooting a 36/40 with his Thomas.  He was followed with Barry and Van tied with 32, and Ben shooting a 28.

Next month we will be shooting on the 4th Saturday and will be moving over to the Rifle Silhouette range.  Hopefully we will find a home there as fewer user groups at BASF use this range.Big thanks to Mike who helped paint the targets the day before the match and to Ben for showing up early to help set the course.  We were then assisted by Scott and Van towards the end of set up.  EVERYBODY pitched in to take down the course, followed by awards and the group picture.

No burgers today at Wild Horse West as Phoenix has shut down all dine in restaurants due to this CORVID-19 hysteria.  Not sure if it is an overreaction, but I guess it is better to be safe than sorry.

“Hopefully” we will see each other again next month 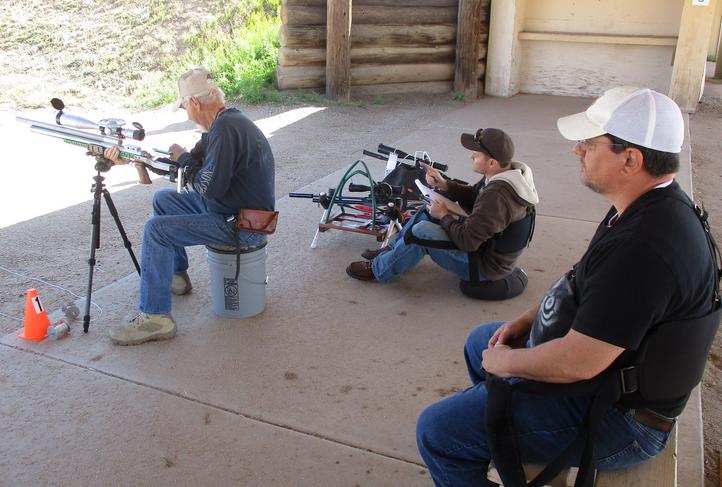