I was drawn to shoot with Cole this match, and during the course of shooting, I asked if he would give me his impression of the course and the match.  He sent me his write up which turned out to be exceptional.  We have a budding journalist in our midst.  I have used this method of supplementing the match report in the past and will try to develop it more so in the future.

Here is Cole’s take on his experience;

“The last match of 2018 took place in a new venue and at a new time. A little background: Last winter, our matches at Ben Avery Shooting Facility were located on the western edge, and south of the FITA archery range, alongside Dead Man’s Wash. Sight-in would start at 8am. Due to proposed expansion projects of said archery area and other situations outside of our control, we would have to be relocated. Early last summer we were informed that our newly designated/assigned area would be to the pistol silhouette range, which we would share with three other user groups. There were mixed feelings and general consternation of the newly assigned area. Fast forward to 12/15/18 and the December match was our first foray into shooting on the pistol silhouette range.

We were told the course was scheduled to be in use that morning but would be free at noon. Wayne, Don, Kent, Ben, and Mark arrived a little early to find the range vacant, so they went ahead and set up the course. And a very nice course did they set up. It seemed that the average distance was a little further than our norm. I can remember four or five targets out past 50 yards, with larger kill zones, a healthy smattering from 20 to 50 yards, and another 4-5 targets under 20 yards, with pretty small kill zones. There was at least one 3/8. I was told the Troyer factor worked out to a 31 but I’m sure that didn’t account for the tricky little wind we dealt with.

While there were large stretches of time during the course with dead-calm, we did have a little air movement at times. I would guess that even the gusts didn’t go over 6-8 mph. Most of the little wind we had was coming from our backs and would shift slightly to come from the right and left. Basically, there was just enough wind to keep everyone guessing about whether or not we needed to account for it by holding off a little. One of my misses was a hold-off that hit exactly where I was holding, (right on the outside edge of the kill zone) and I heard numerous other shooters comment that the same thing was happening to them. As for the rest of the weather, we were treated to a beautiful day with temps around 65 for the majority of the match.

The temp was just right to where a light jacket wasn’t too much, and short sleeves weren’t too little. I myself had the jacket on and off a few times and saw others doing the same. It was an overcast day, but the cloud cover seemed at high altitude and fairly thin, resulting in bright conditions, but not full sun.

13 shooters came to play: Three shooters in Hunter PCP, of which Ben prevailed with a 38/40 Six shooters in Open PCP, with Scott taking 1st place with a 38 also.  Four shot in Freestyle, with Mike notching yet another perfect score of 40/40. (Mike has been doing that a lot since he got his Thomas.) Kent shot a quite impressive 38/40 with his Marauder to garner Second place.

Open PCP had a tie between myself and Bill with 37/40 each. We had a shoot-off that resulted in us both hitting a near target and me missing the far one and him hitting it to take 2nd place.

There was the typical banter and ribbing, mingled with the technical discussions that included some of the attributes and deficiencies of various scopes. We also had two visitors, Tom and his daughter, Amanda, checking out field target for the first time. As usual, there were guns, configurations, and techniques being tested, everyone always wanting to improve and gain a competitive edge.

One of the nicer features of the new location is how easy it was to pull the targets. It took a grand total of ten minutes to collect the targets and wind the strings. Everyone lent a hand to compile the targets into a central location, to which Wayne was able to pull his pickup.

I got the impression that many members felt that a lot of the fun of field target would be lost by holding it on a flat patch of gravel with no ground cover, bushes, or other natural obstacles like we usually have. I too shared that sentiment and I think a lot of it comes from how fortunate we are to have had some amazing shooting venues like the high pines south of Flagstaff, the river bottom at Bobby and Sandy’s place in Camp Verde, and up until recently, the Sonoran Desert course next to the archery range mentioned above. I was pleasantly surprised today. The featureless gravel patch where we held the course actually created its own set of difficulties and combined to form an interesting new challenge.  From numerous comments made my many of the shooters, I concluded that the shooters today (me too) realized quite quickly how much we all pick up on the subtle swaying of branches, bushes, and grass to help guesstimate windage. With nothing out on the course to see move, it was quite fun to try to guess what the wind was doing. As already noted, it was a fun new set of challenges that wasn’t expected.

I personally liked the concrete pad that we shot from today. I heard Larry jokingly comment that he missed the big cloud of dust that we get when we sit down in the dirt. While it wasn’t a warm day, the overhead roof was also nice to keep us out of the sun. I suspect that roof will be much appreciated in April when it starts to get warm in Phoenix. Further, there were numerous tables and benches that made convenient places to lay guns or gun cases and sit on while keeping score. Overall, I was not as disappointed in the new venue as I expected to be and had a very fun time. 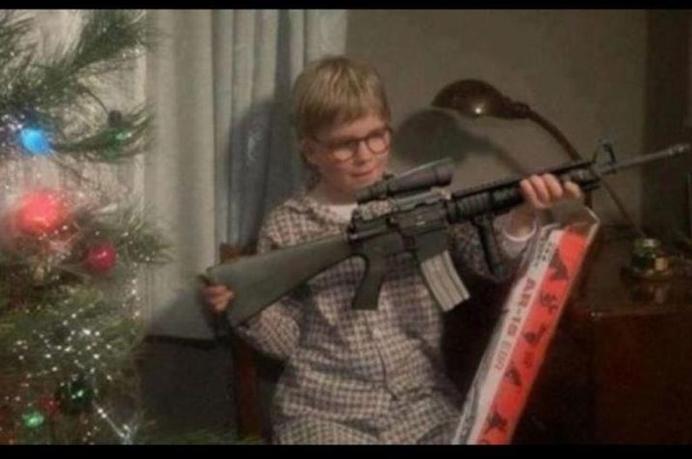 There were bright spots though; we got to the range a bit early to start prepping and found no one on site, so we were able to get ourselves in gear and start setting up.  We had the range reserved for our group from 12:00 noon until 5:00 pm, but with Wayne, Don, Ben, and Kent on hand, we had the course set up by just before 12:00 noon.  Most everyone had shown up by that time, so we opened sight in and got to it.  By 1:00 pm and no more shooters arriving, we decided to start the match.  Just prior, we had our shooters safety meeting and lane assignments taken care of.  Tom and his daughter, Amanda, had heard about us and after making contact in the week before for directions, they roamed from lane to lane and watched the action to see what we do and how we do it.

The ten lanes were situated under the covered firing line on the west side of the range with about 15 feet in between firing positions.  Conversely, the sight in targets were set up on an echelon on the right side of the range to keep things separated.  Two targets per lane were situated down range with the distances appearing quite deceptive.  The course was designed to be a 31.09 Troyer without any wind, but there were only a few (3) targets under 22 yards.  Six targets were beyond 43 yards with the rest scattered in between.  Without the vegetation, distances were deceiving.

Awards were then presented and a group shot taken (before everyone wandered off).  It took next to no time to tear down the course and clear the range.  Thanks to everyone present for making quick work of this.  All in all, everything worked out well in this uncharted area.  The later start gave us a few extra hours of sleep and/or travel time, and the match was completed, with shoot off, awards, and tear down by 3:30 pm.  Everyone had a good time and a lot of positive comments about the new venue were offered.  Although still looking to put the “field” back into field target, this range will work out for us nicely for the foreseeable future.

Mike shooting a Thomas clamped into a tripod in Freestyle.  He would go on to shoot a perfect 40/40.  Time for another challenge; maybe springer? 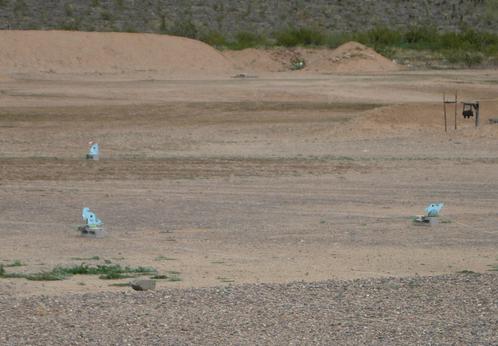 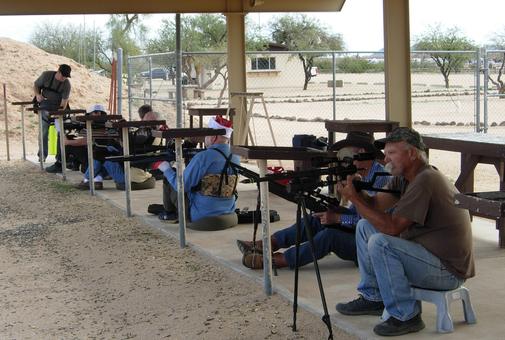 Another view, with the FT course set up on the west side, in the distance 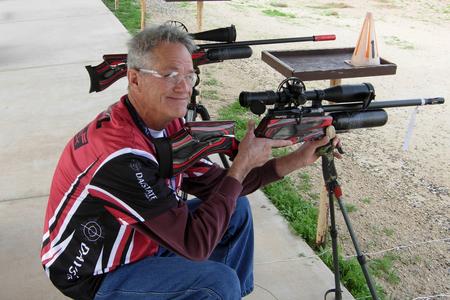 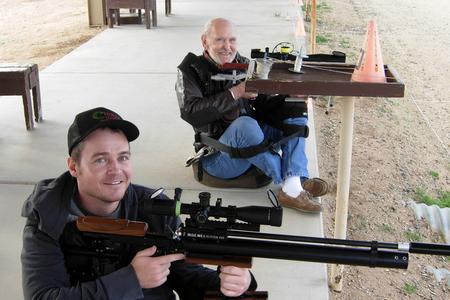 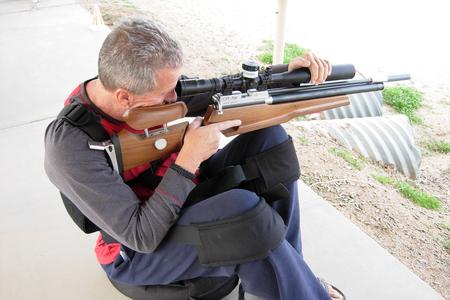 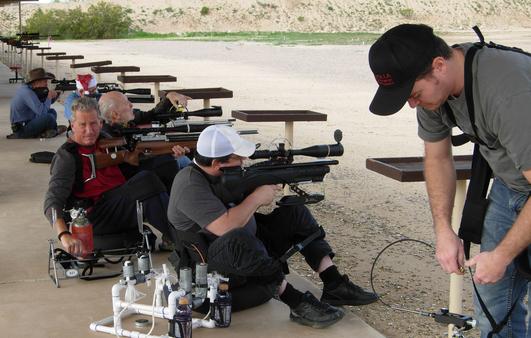 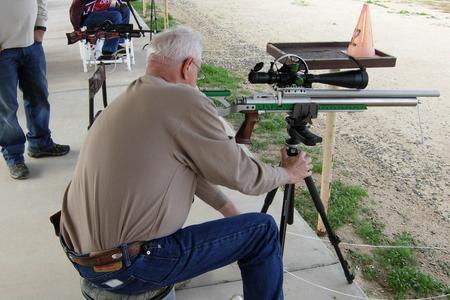 Larry, aka Santa Claus, scoring for somebody

Merry Christmas and Happy New Year to All!

Make sure you don't shoot your eye out!! 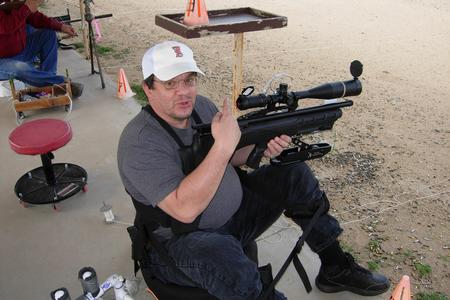 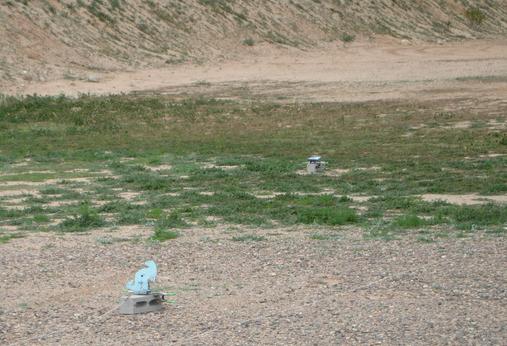 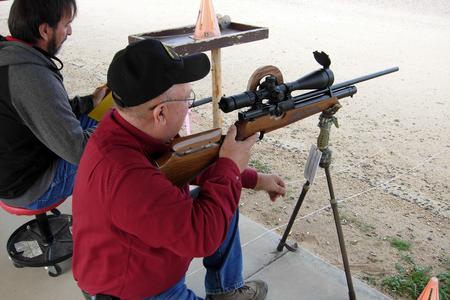 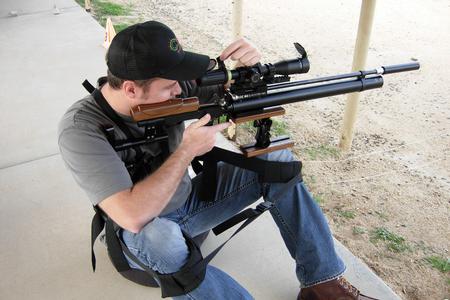 As you can see, we had a tie for second and third place in Open PCP class.

The last match of the year,

Our shooters had gathered,

And were full of good cheer……

…..well, not quite.  This was to be our first match using the pistol silhouette range, and was missing the usual trees, shrubs, grasses, and other terrain features that we have been shooting amongst for the past number of years.  It is flat and featureless, but we will give it a go and make the best of it.  The group soon learned that it offers its own set of challenges.  Once the match got started and the 13 shooters for today’s match got into the swing of things, it worked out well.

As far as weather went, it started out dreary looking.  With heavy clouds and no sun peeking through, if it had been any colder, I would have thought we were going to get snow.  But the clouds broke up by late morning and became patchy, with some scattered sunshine, but still not very bright.  The temps called for the low 70’s, but only got to the mid 60’s by the end of the match.  Good weather for a sweatshirt. 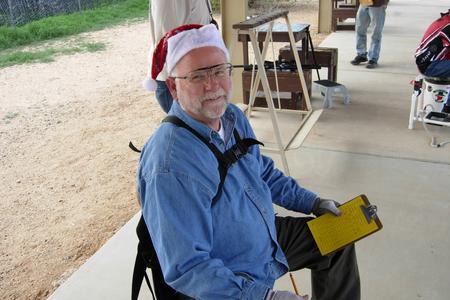 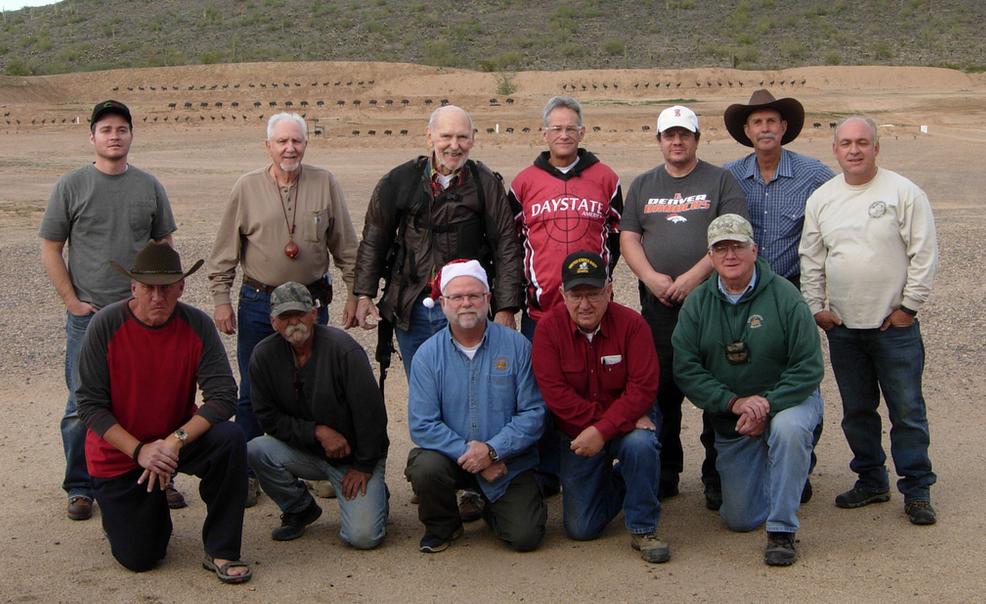 The sight in line situated on the east side of the range.