Our next match will be the Arizona State Championship on Saturday, September 19.  This will be a one day, 60-shot shoot due to the Covid-19 restriction protocols in place.  Match information and times are posted on the club website at www.airgunnersofarizona.org.

Sorry for lack of pictures today.  Was partway through the match when I remembered my camera was back in the truck.  Did get one group shot afterwards.  Thanks to Bill and Garrett for a few pics taken.

Sorry, Photos are not cooperating.  This was the only one that "took". 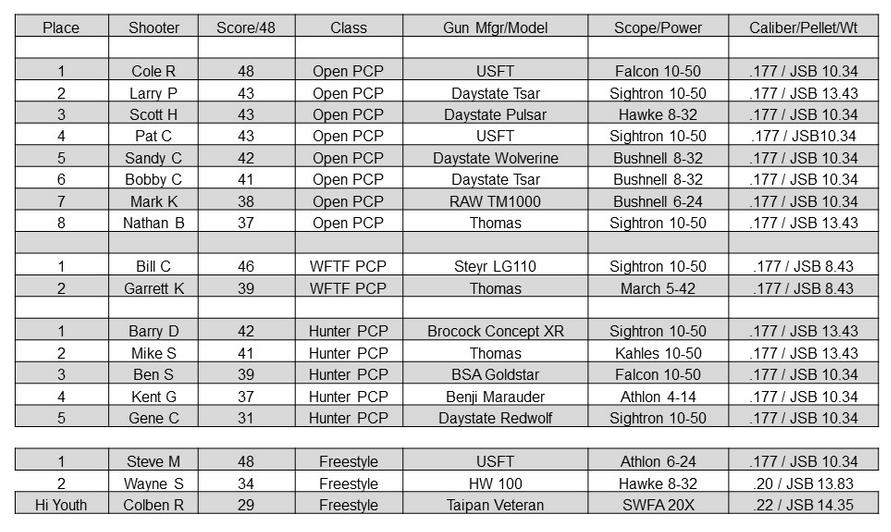 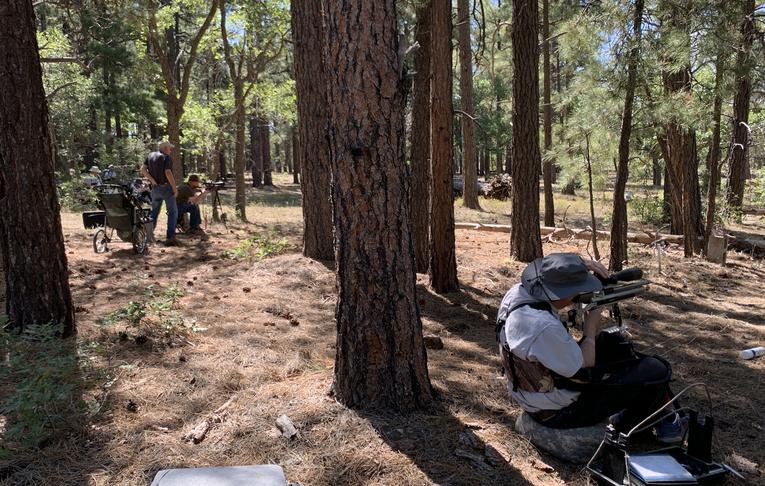 Not much rain has fallen since last month, which caused the forestry department to reinstated Stage I fire restrictions as of Friday morning, so no camp fires for those camping on site this month.  The skies both Friday, during set up, and Saturday, for the match, were bright blue with only patchy cumulus clouds here and there.  The daytime temperatures were also higher than normal and in the upper 90’s.  Unusual for this elevation.  The winds were light and somewhat variable and keeping things a bit cooler and bearable, as well as being in the shade underneath the pines.

Friday afternoon, Steve, Kent, and Wayne set up 12 lanes along a west to east line with all shooting planned for a southerly firing direction.  With the targets clamped on the quarter (concrete) blocks, this made for a fairly quick target placement and leveling.  A quick touch up of paint to cover previous pellet hits and this month’s course was ready to go.  The sight in range was set up early on Saturday morning as 18 shooters congregated to do battle on the 48-shot course against the army of steel critters.

The wind did not have as much of an impact, but the mirage was heavy!  Also, with the sun being so bright, those targets positioned in the shadows and against the bases of trees, were harder to see. The distance from lane one to lane twelve was at least 200 yards or so, and it was a bit of a hike from one end to the other.  We are still maintaining social distancing as required and have our masks and personal sanitizers close at hand.  So far, so good.

We contested four classes today with Open PCP having the most participation with 8 shooters.  Cole took top honors shooting 48/48 and using a new scope, which he stated really upped his game.  Obviously, that worked well for him.  Larry, Scott, and Pat were all tied with 43/48 with the ties broken by highest number of X’s in a row.

In WFTF class, Bill and Garrett battled it out with Bill shooting his Steyr today and scoring a 46/48 for first place.

In Hunter PCP we had 5 shooters.  Barry shot his new Brocock Concept and edged out old man Mike by shooting 42/48.  Mike was one behind with 41/48 and Ben taking third by hitting 39/48.

In Freestyle class there were three shooters.  Steve (match director) shot clean with 48/48 and High Youth, 6-year old Colben, shot 29/48.  He carried, adjusted, and shot Cole’s spare rifle, with dad coaching.  Little guy is learning well and has a great personality!  Here is the future of the sport in action.

Here are the scores and stats for all shooters;