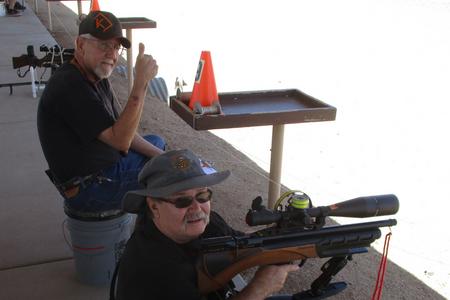 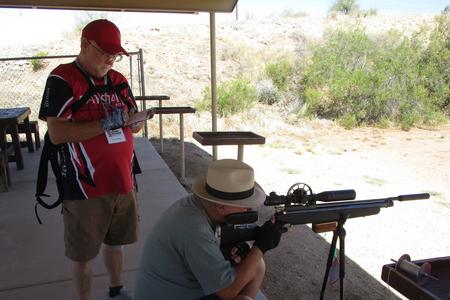 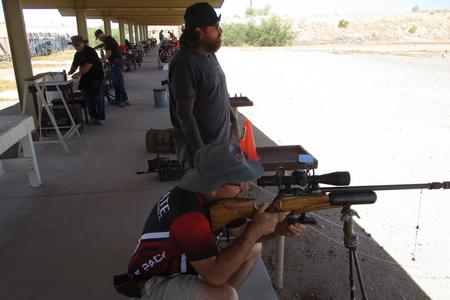 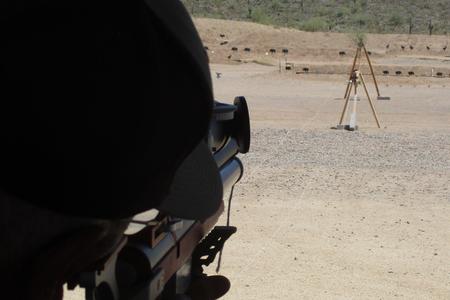 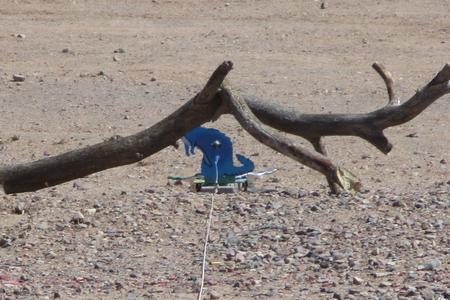 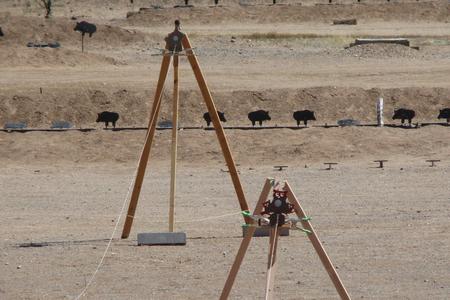 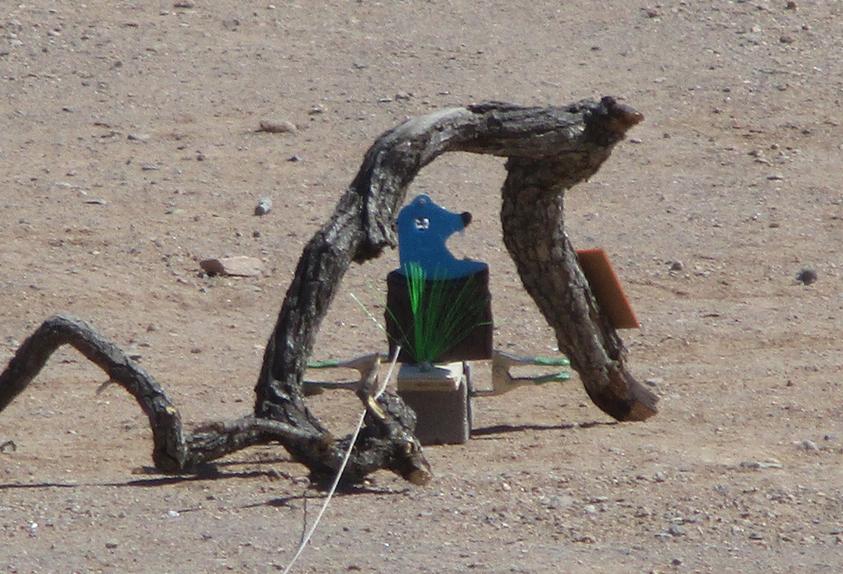 We had 12 lanes, of two targets each, set up for a 48-shot match.  With those who showed early to help set up the course, some of the targets were, once again, set a bit on the adventurous side.  How tricky is a ¾” target set at 39 yards in shifting wind?  We also had some terrain features incorporated with some of the targets to make it a bit more “interesting”.

From our recent recon trip to the Mormon Lake venue, Wayne and I brought back a few fallen, gnarly looking tree branches.  These were strategically placed in front of a few of the targets.  Wayne also made up some “grass” props to fit under the target bases to add a bit more realism.  Joe made up some elevated tripod “trees” to get the targets a bit higher up in the wind.  When holding the string up, it indicated a strong right to left wind, yet the wind indicator on the front of the barrel was showing a strong left to right wind.  One of the guys saw that and said, “I don’t believe that!”  Yes, we had fun. 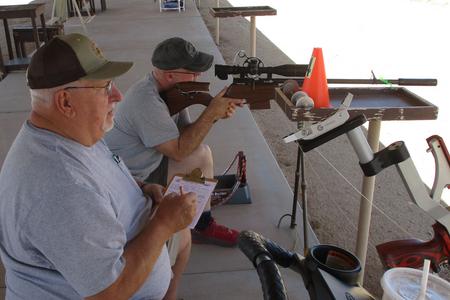 This will be the last monthly match at Ben Avery range until November.  Starting in June and running through October, the monthly matches will be held at our summer venue at Mormon Lake, AZ.

We thank everyone who showed up early to help set up, and for all who stayed afterwards to help take down, especially Pat C, who drove over from Las Vegas.  Thanks, guys.  You’re the best! 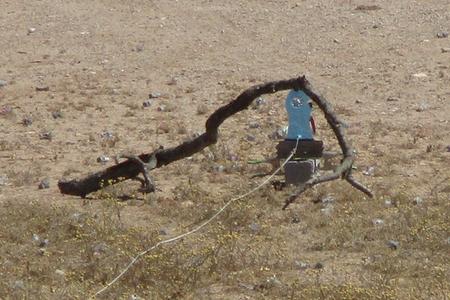 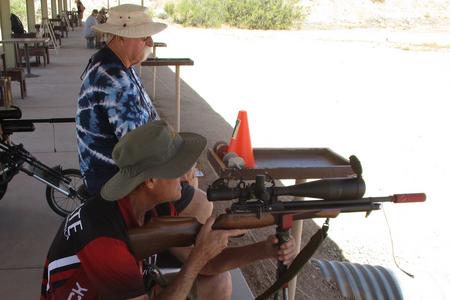 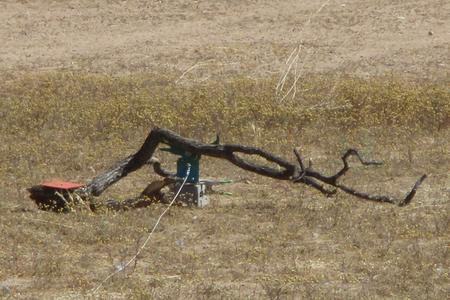 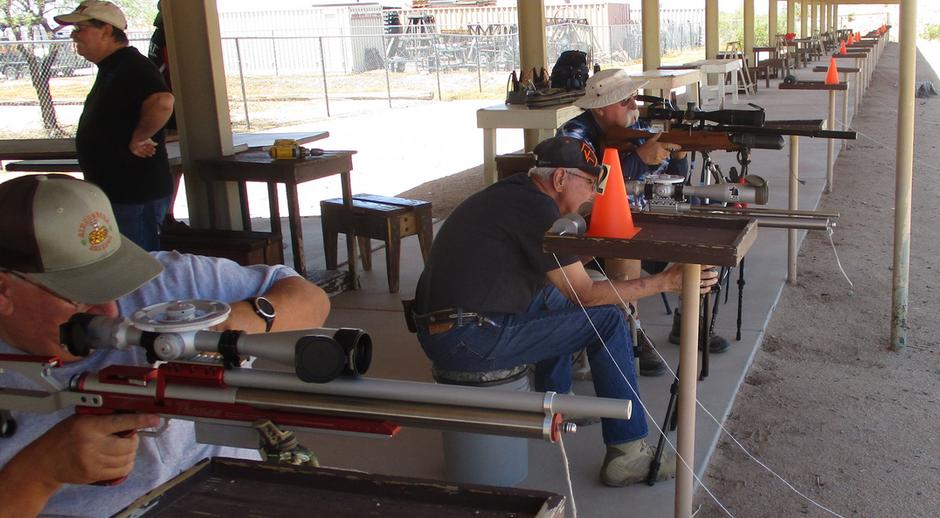 The shoot-off contenders L-R; Wayne, Mike, and Steve.  Pat is in background doing his motormouth routine....LOL

Eleven shooters were present today under clear, albeit slightly hazy, blue skies, with mild temperatures from 79° to 82°, and humidity in the high teens.  Shooting from beneath the covered canopy was out of the direct sunlight, and quite pleasant, however the winds were once again, challenging.  They were constantly erratic, and swirling, coming from every compass point at between 6 and 13 mph with gusts to 18 mph.

The NWS forecasts and reports the weather conditions from nearby Deer Valley Airport, just a couple miles south of the range.  Normally, these conditions are reported every half hour, but with the erratic behavior of both the wind velocity and direction, they report/record it every 5 minutes when conditions, such as these, present themselves.  With Black Mountain (Ben Avery range used to be called Black Mountain shooting range in years past) as our backstop, immediately to the north of the range, these wind conditions can take on a whole different attitude of their own.

The range has been historically notorious for weird wind conditions over the years, with the U.S. international shooting championships held here back in the 1960’s – 70’s.  Word has it, from the old timers, that if you can shoot at Ben Avery, you can shoot anywhere.  I don’t know if we are blessed or cursed with shooting here, but we certainly have experienced our share of wind over the time we have been using the range, have learned how to shoot in it, and a LOT of good scores have been posted, as well.

Three classes were contested today, with two shooters in Open PCP class, One shooter in Open Piston class, and the remainder in Hunter PCP class.  Ben S. was top shooter in Hunter PCP with 45/48, but there was a dogfight for 2nd, 3rd, and 4th places that warranted a shoot off.  Mike, Wayne, and Steve each tied with 44/48 and were arrayed across the firing line to shoot in their normal bucket and sticks position, then kneeling, and finally standing, with the intent to keep going until somebody missed.  They went on for quite a while, with all hitting in strings or missing in strings, until Mike (2nd place) finally ended up on top, followed by Wayne (3rd place) a few shots later. 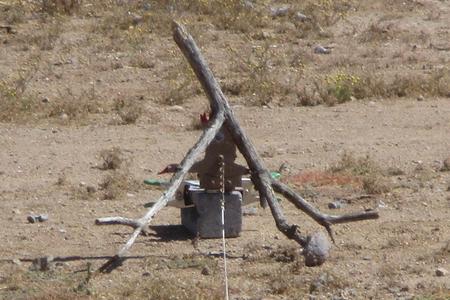