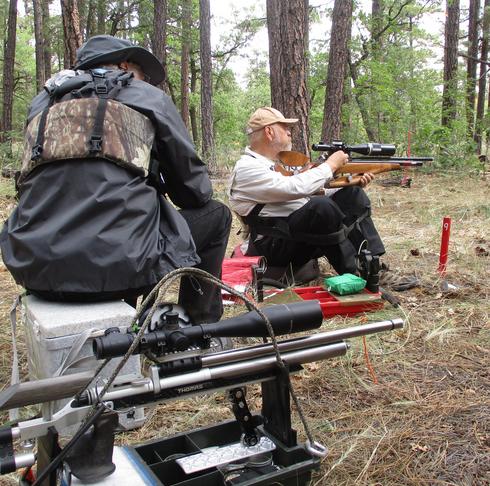 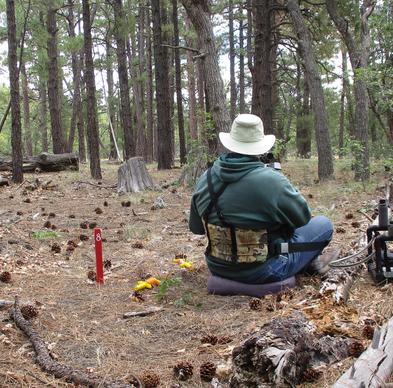 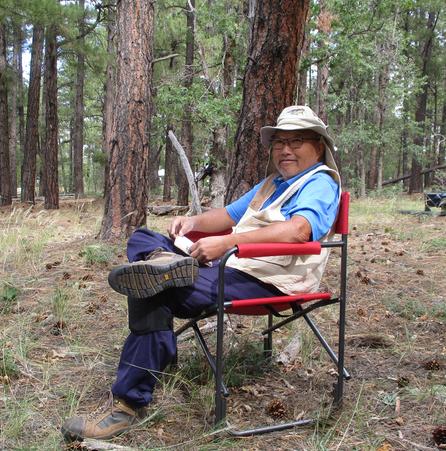 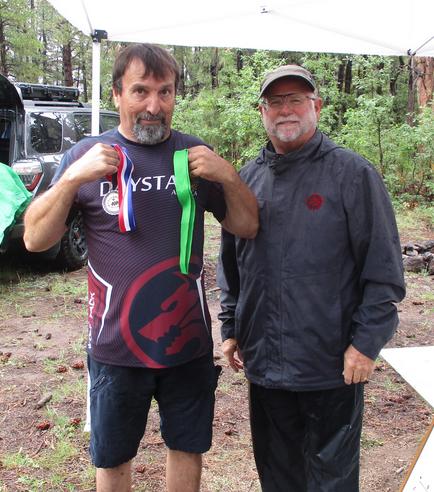 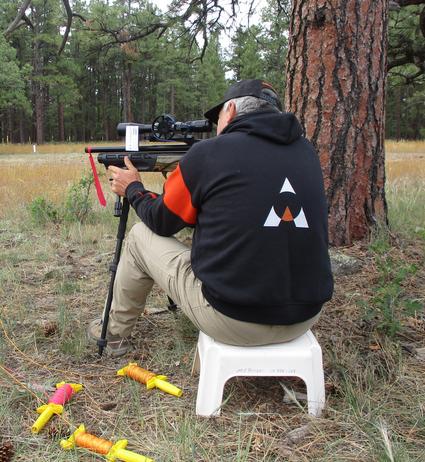 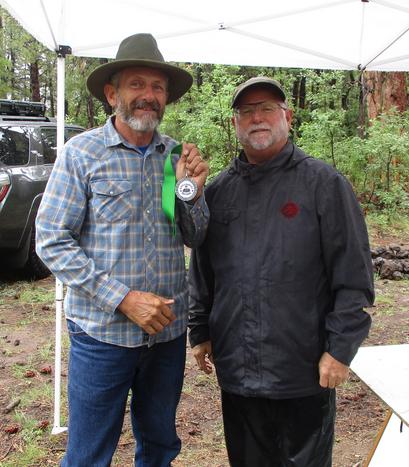 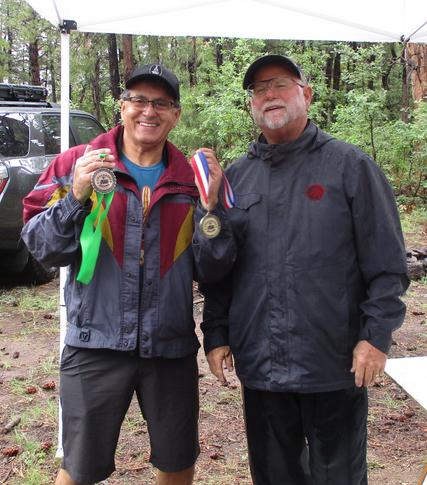 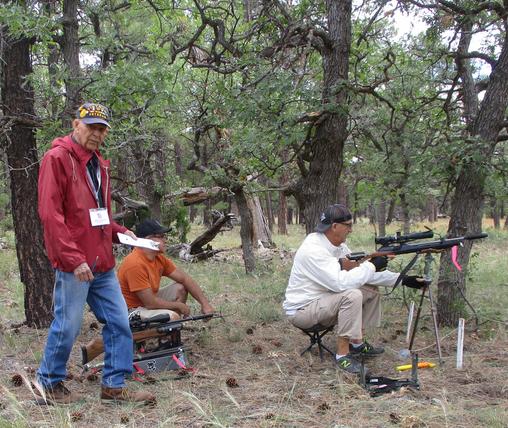 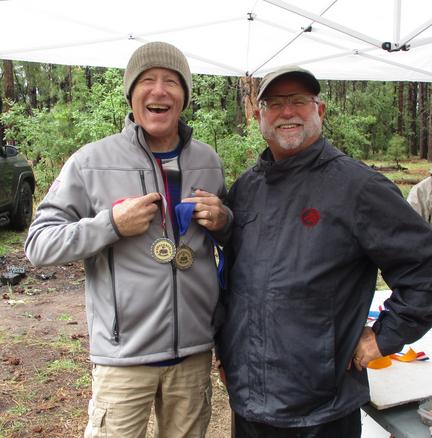 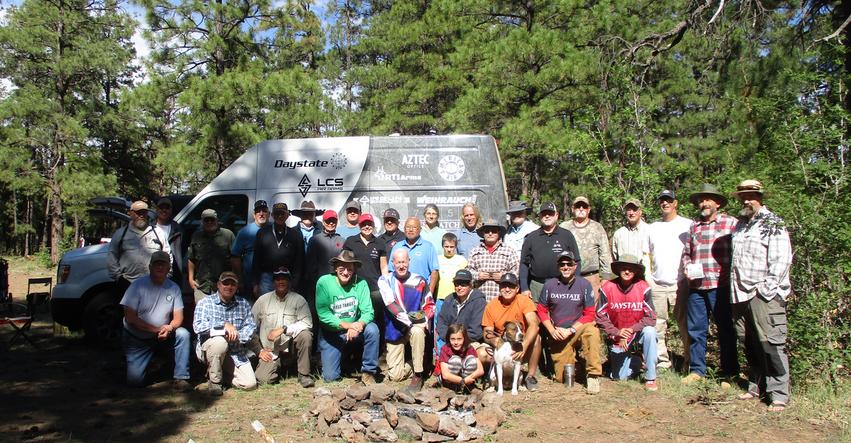 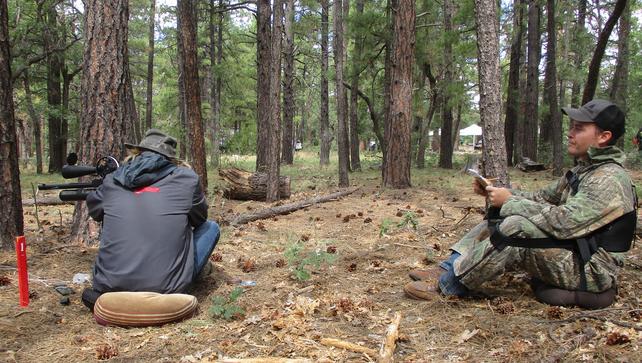 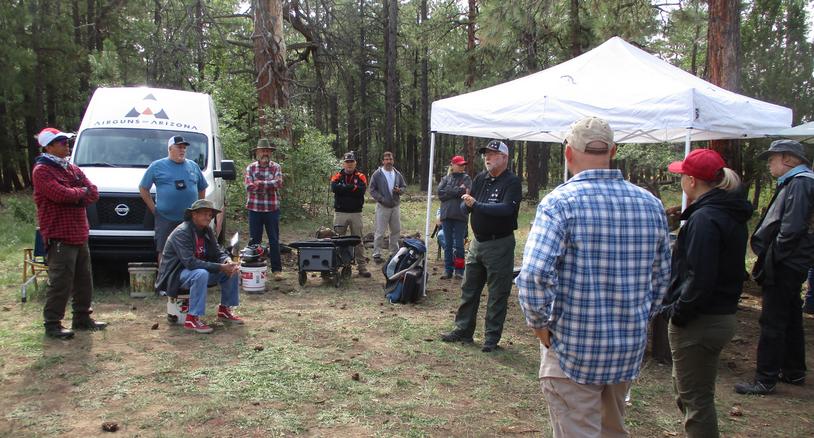 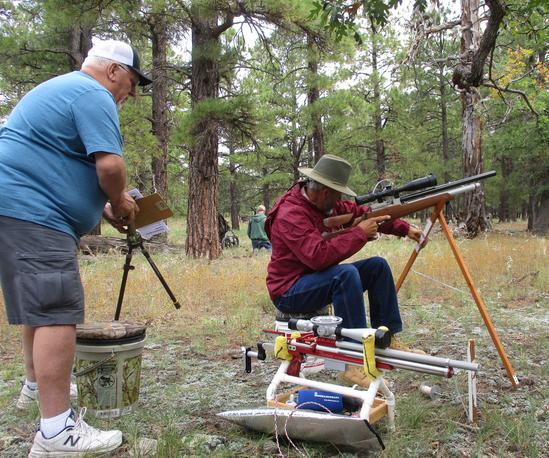 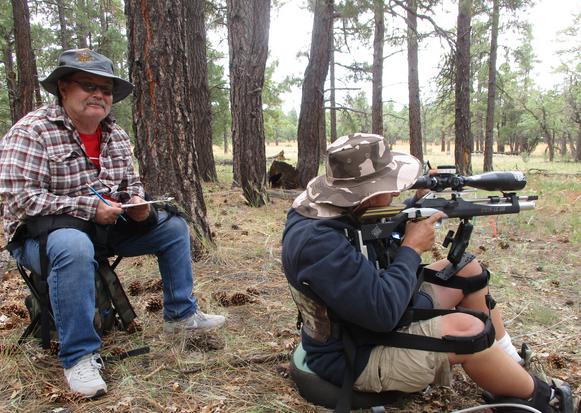 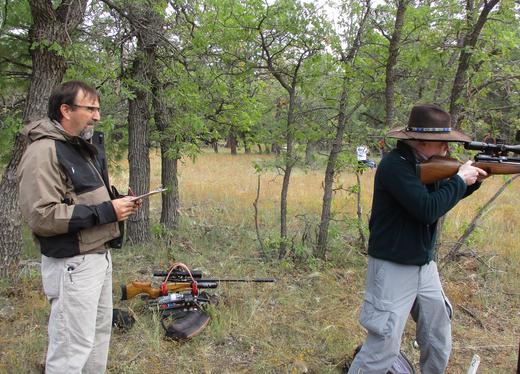 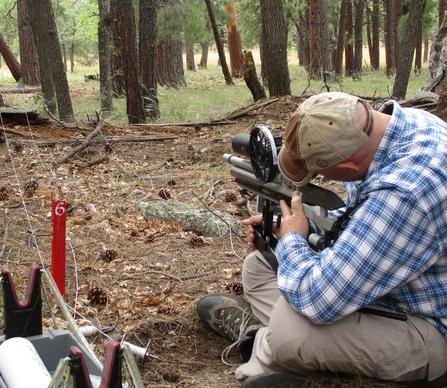 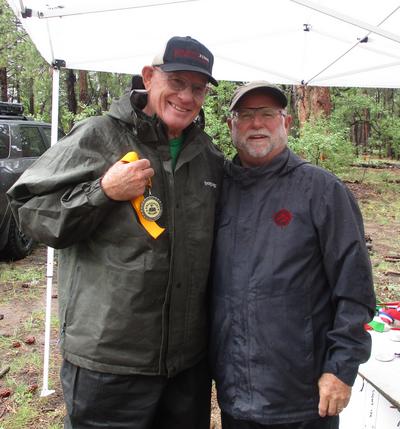 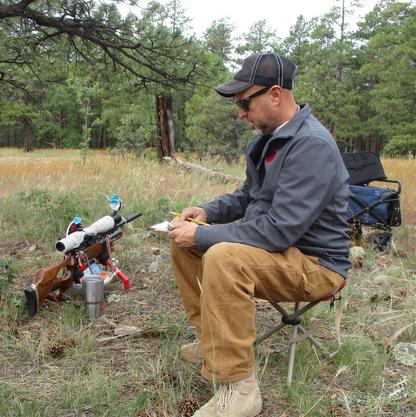 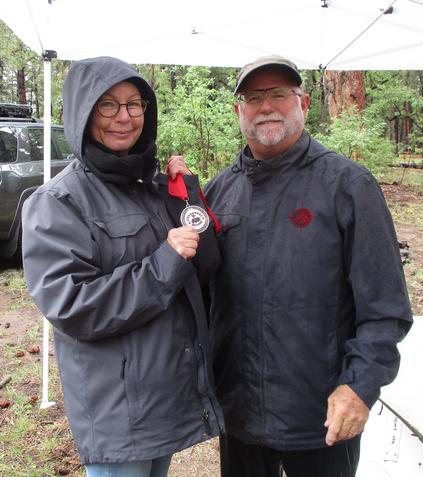 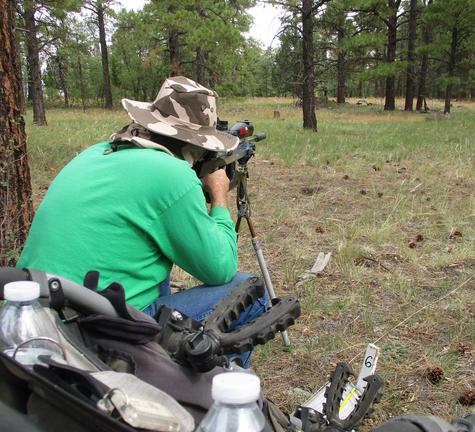 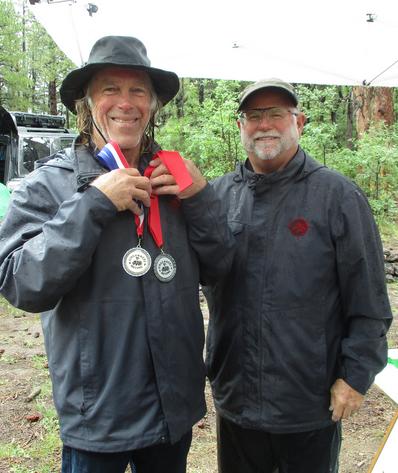 The 2021 Arizona championships is now in the history books as having the strangest weather to date.  Over the course of Thursday afternoon and all-day Friday, two rifle courses and one pistol course were laid out.  The pistol match, which was contested on Friday afternoon, was made up of 11 lanes of two targets each, arranged in a semi-circle facing north, and alongside one of the gravel tracks at the north end of the property. The course was designed with a Troyer factor of 35.76.  This course was positioned just north of the central assembly area.

The pistol match started around 3:00 pm on Friday with 3 people shooting Limited class, and 7 people shooting hunter class under scattered clouds, 73 degree temps and winds ranging from calm to 7 mph out of the east/northeast.  Bill did a great job of officiating this match, in addition to setting up the course with his own targets.

The sight-in range was positioned to the east of the assembly area and facing approximately southeast.  The two rifle courses, designated White and Red, were located adjacent to either side of the sight-in range.  They were designed in an open “box” configuration.  Lanes 1 through 4, and lanes 6 through 9 were parallel but opposing each other to form the sides of the box.  Lane 5 was positioned midway across the bottom of the box, with access to these courses through the open “top” of the box.  Shooters entered the Red course from the north and the White Course from the west.

The lanes in each were separated by 10 to 15 yards with the distance to travel from lane 9 back to lane 1 being only approximately 30 yards to eliminate any excessive walking distance.  Each of the lanes had three targets radiating out from the firing points, except for the kneeling lane, which only had two targets.  Each course was plotted out in advance and identical in design, differing only in target placement depending upon terrain features.  The Troyer factor for each was 32.83 without any environmental concerns figured in.  Also, coolers with water, an air bottle, and a trash bag were centrally located within the “box” for convenience. 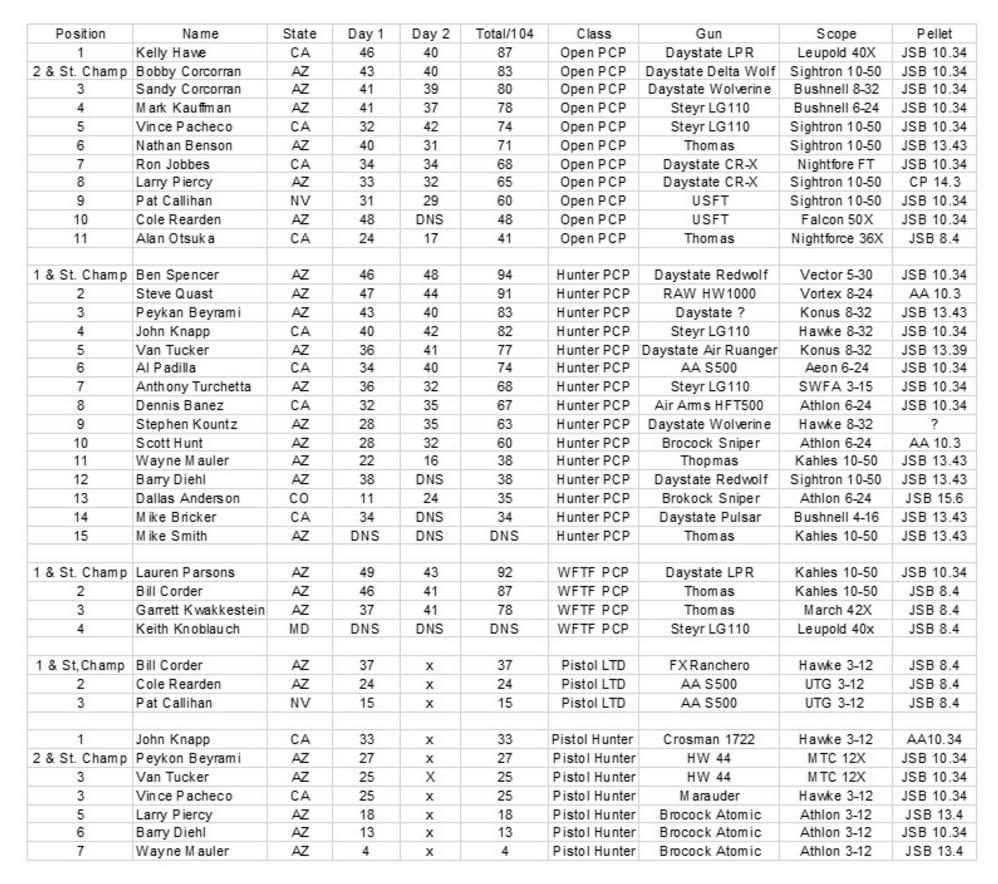 The winners were announced, medals were presented by club president Larry Piercy, and pictures were taken.  Congratulations were offered, wet gear was put away, and gradually everyone made their way home, hopefully safe, and hopefully sooner than expected.  And, of course, it started raining again afterwards and kept on raining.  All in all, it was a good match in that it tested skills in various shooting conditions.  It is unusual in that it rained each of the past 3 matches, while the June match was canceled for overly dry, fire conditions.

In order for any of this to have actually happened takes a team of volunteers to come together and make it all work.  This month’s match was a Herculean effort by Larry Piercy, Barry Diehl, Bobby Corcorran, Pat Callihan, Wayne Mauler, Cole Rearden, Bill Corder and Alan Otsuka from CASA.  I hope I didn’t miss anybody. These guys humped all the blocks, targets, strings, and clamps into position on all three courses.  They weed-whacked all the tall grasses in order to even see the targets.  They weed-whacked, measured, and set up all the sight-in targets on that range as well.  Thank you, thank you, thank you!

Taking in the targets afterwards was conducted by almost everyone participating.  That is also very much appreciated.  We were all wet, but we pitched in to get the job done.  That made it much easier to separate everything, load it all into their respective containers, and place back into storage.  We all hope that no one hurt themselves, but still realize there will be aches and pains and maybe a visit to the chiropractor.

The area we use is a leased portion of the Coconino National Forest and located just north of Mormon Lake.  The area is heavily covered with Ponderosa pines and junipers, and the ground is covered with volcanic rocks, making walking a bit ponderous at times

This will be one of those matches that will be remembered and recalled for years!

Thanks again to all the helpers.  Congratulations to all the winners.  Take care, be safe, stay healthy.

Saturday morning saw most of the participants arrive and after the shooter safety meeting and lane assignments, the Hunter PCP shooters occupied the White course, while Open PCP and WFTF shooters shot on the red course.  This would reverse on the second day of shooting.  Temps all day were in the low to mid 50’s, but comfortable.  Clear skies with some patchy clouds and winds that ranged from calm to 13 mph, with some gusts as high as 28 mph and swirling.  Weather data was derived from the NWS at nearby Flagstaff airport.

After the shooting concluded for the day, we were treated to pulled pork sandwiches, cole slaw, and home-made baked beans, courtesy of Scott and Mary Ann.  Mary Ann, otherwise known as Miss Moneypenny is our club treasurer.  They offered to take care of lunch and also provided cookies and other goodies for dessert.  It was wonderful!  The twins, Sam and Emma, also helped mom and dad.  Thank you guys so much for doing this for us.  It was something special!Through the graciousness of Robert Buchanan, owner of Airguns of Arizona, we had a number of items donated for our annual raffle.  Robert was on-hand to witness this event, hosted by Larry Piercy, club president.  Sam and Emma assisted in pulling numbers and announcing winners.  Raffle items were also donated by Tony Turchetta, owner of Penchetta Pens & Knives in Scottsdale, and also one of the shooters.  Thank you to both Robert and Tony for your generosity.

Sunday morning had a completely different outlook.  The skies were heavily clouded, the temps were in the low 50’s, wind was from primarily the WSW at between 3 and 8 mph, with some periods of calm throughout the day.  It was drizzling prior to arrival, and a decision was made to start a bit earlier in order to finish before the heavier rains came, historically just after lunchtime.  As it turned out, it rained throughout the entire match, sometimes heavier than at other times.  It was a wet, muddy mess at places throughout both courses.  It did stop for a short period of time at the end of the match in order to collect the targets, collect and collate the soggy score sheets, and add up the scores. 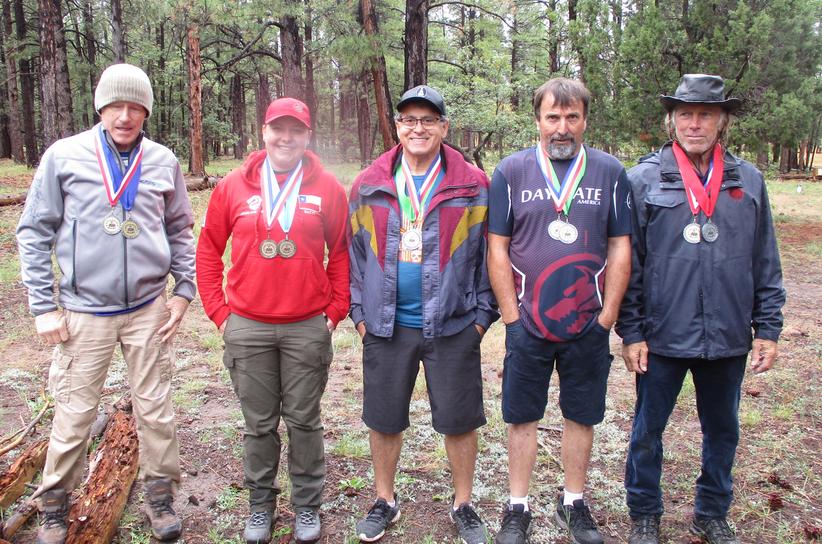 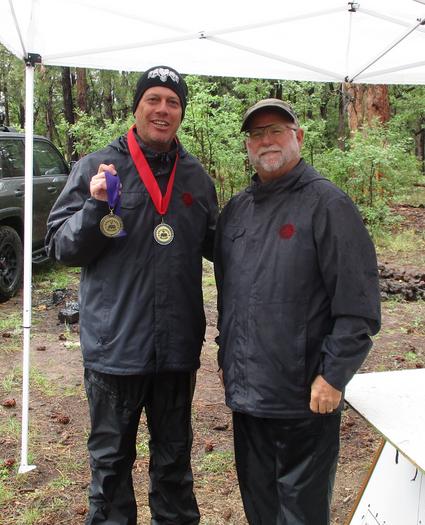 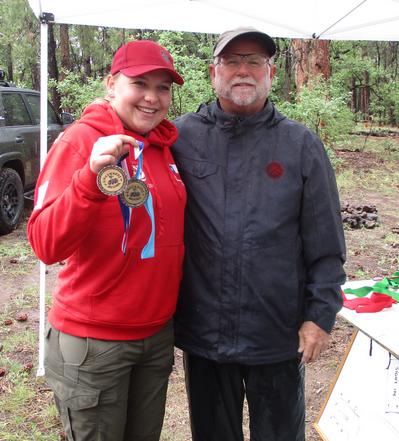 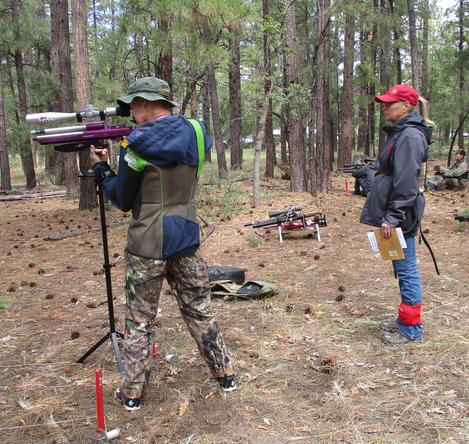 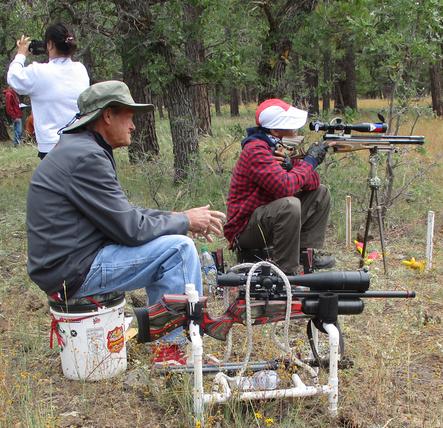