What we ended up with was 4 squads with 4 shooters, and one squad with 5 shooters.  It DID give us a lot of time to socialize, but most felt that it was too much time in between actual shooting.  It may have worked with fewer shooters, but we tried it and learned from it, but it was, after all, an experiment. 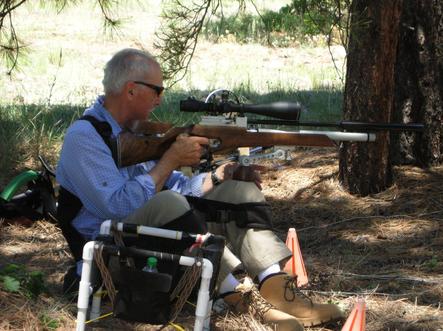 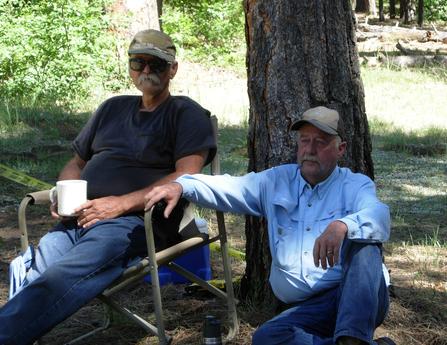 After the match, the score cards were collected, tabulated, and awards were presented.  The group sat around munching on watermelon and socialized for a while.  Not sure who provided the watermelon, but still wanted to thank them.  The group assembled for a group shot, and even though some had departed, we got most of them in the picture.  Thanks to Natalie for performing the photographic duties.  The pictures look great. 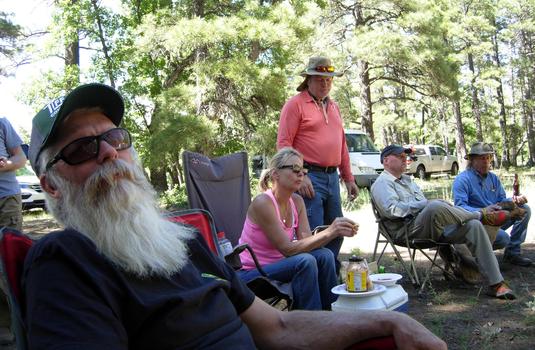 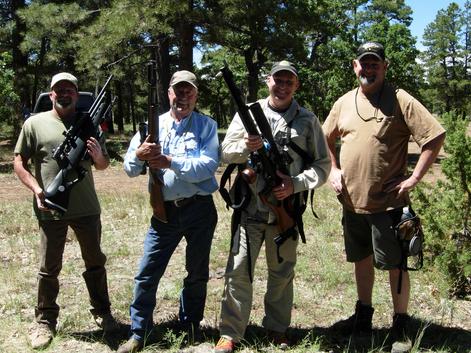 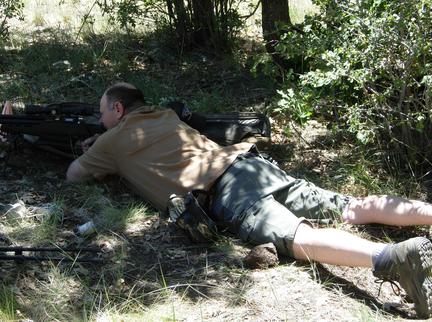 The second surprise came upon arriving at our venue.  To put the demographics into perspective for the first monthly match at Mormon Lake for this season, this is what we ended up with:

The reason it surprised us is that we don’t normally get that many shooters for the June match, especially after sending out the notices to the membership about the fire restrictions.  Steve, our match director for this venue, wanted to experiment with something different; we were going to set up 5 lanes, but with 4 targets per lane.  We would still have 2 shots per target and still end up with a 40 shot match, but he felt is would be less up-and-down movement and may allow the match to flow a bit faster.  So Steve, Don, Wayne, John, Richard, and I laid out the 5 lanes and located 4 targets on each.  It actually worked out pretty good in that we had one each of a ½”, ¾”, 1”, and 1 ½” KZ target on each lane.  All lanes were situated in a shallow semi-circle configuration, facing to the north and using every terrain feature we could find to set the targets on, in, or near.  If there were downed trees, we used ‘em.  Tree stumps, we used ‘em.  We had a woodpecker on the side of a dead tree, we had targets set up out in the open, and we had targets set deep into the shadows.  We also set up the firing points to allow plenty of shade from the morning sun, which can be glaringly bright.  As it was, the sky was a brilliant blue, with a few high, wispy clouds.  The temperature climbed from a cool, comfortable morning to warmer than normal in the afternoon. 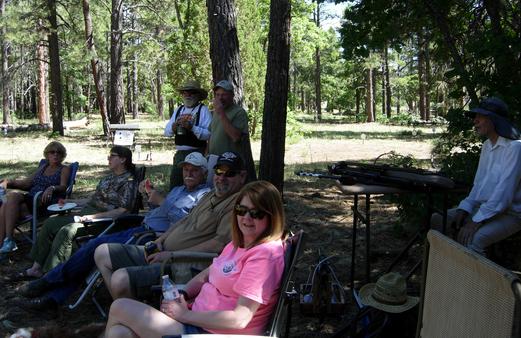 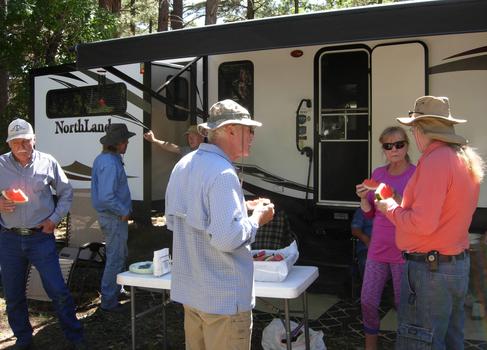 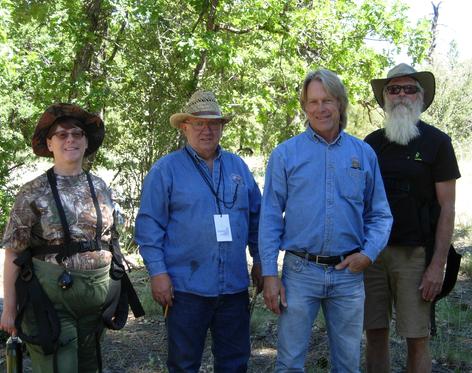 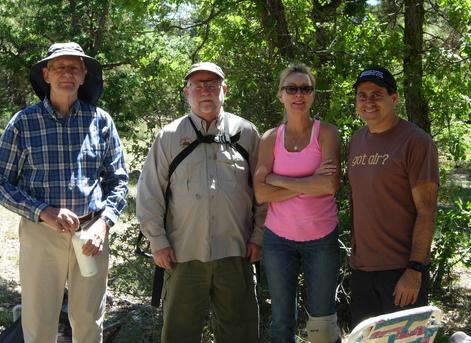 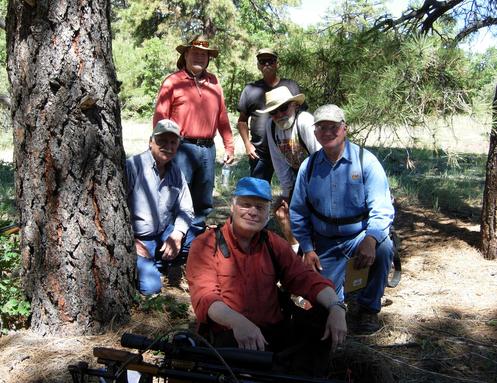 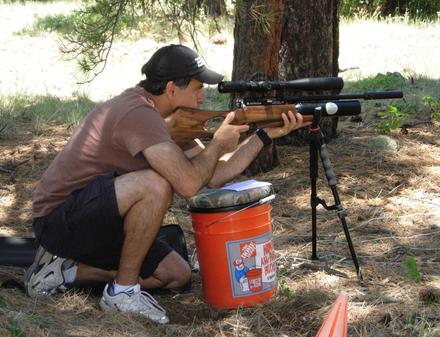 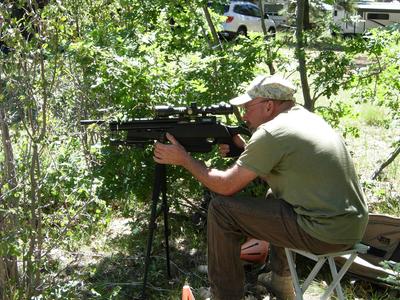 We wanted to keep this a fairly easy course due the predicted weather report, which called for stronger than normal winds with anticipated gusts up to 20 – 25 mph.  This is where the third surprise came in; it was almost calm, with calm being a relative term.  We had a little bit of a breeze; maybe 3 to 4 mph with some light gusts, but nothing to speak of.  With wind, the Troyer factor would have been 32.24.  Without the wind, it was a fairly easy (for us) 25.83.  As it worked out, the troops took full advantage of it and shot some fantastic scores! 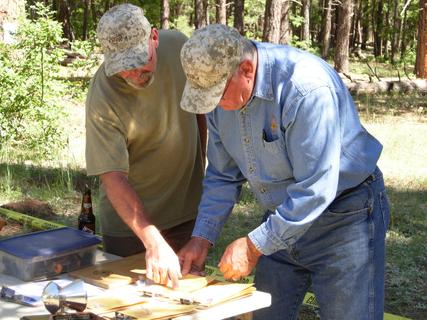 This month’s match started out as somewhat of a surprise and continued on through the match.  To start with, we got notification of fire restrictions in four of Arizona’s national forests three days before the match.  We shoot in the Coconino National forest, which is one of the four in question.  After contacting the forestry service rangers, who are responsible for the venue that we use, we confirmed that we can shoot our air guns, thus conduct the match, but we could not have any open flames, campfires, or smoking.  The smoking situation is no problem; none of us smoke anyway.  We do enjoy sitting around a campfire in the evening, but can forego that to comply with the fire restrictions.  The forests are dry, the monsoon season has not kicked in yet, and Arizona has three major wildland fires currently working.  While driving to the site on Friday morning, I saw the huge plume of smoke generating from a newly working fire north of Flagstaff in what appeared to be the area near Kendrick peak in forestry unit 7W.

Wildland fires are nature’s way of thinning out the heavy fuel load in the forests and help to promote new growth.  This is not generally a problem unless it comes close to areas where homes and lives are in danger.  One of our club members is an air tanker pilot who is currently working one of the fires in AZ and will be busy until October or thereabouts.  Wayne, if you are reading this, stay safe out there, brother.

Steve, Richard, Garrett, and Randy.  All posing and acting studly.

Open/PCP class was heavily contested with 10 shooters, and the scores were all clumped together at the top.  Bobby C was Top Gun for this month and cleaned the course handily with a 40/40.  The other scores trickled down with only a single point, or so, separating them.

Freestyle class was also well represented with 9 shooters.  Match director, Steve M, was high score with a 38, followed closely by a pair of 37’s.  One of those scores was from a new shooter!  Randy was invited to the match by Steve, who shared his gun with him.  Steve did a good job instructing and was almost outshot with his own gun.  Steve and John are also doing a great job at recruiting new shooters.  Seems as though a lot of long range rifle shooters that these guys are recruiting, are learning the benefits of shooting air rifle and how it can improve their big bore performance.  Kudo’s to Steve and John for their efforts.  Carl (Doc) even got in on the act by bringing along a retired buddy of his, also named Carl.  They both shot in Open/PCP class.  Several of the other folks that came to observe will be back and will participate in upcoming matches.

Alas, I was the only Open/Piston shooter this month.  I am trying to promote more spring piston shooting to those folks who have spring guns, but don’t think that they can compete against the pcp guns.  It is fun and I didn’t have to stop to refill my tank once!  I am shooting at 12 fpe and found that there is only a 20 click elevation difference between my 25 yard zero in Phoenix (at 1200 feet elevation) and my 25 yard zero in Flagstaff (7200 feet elevation).  I am also only losing 30 fps in velocity as well, so once I had my dope worked out, I am able to hit with consistency.  I was very happy with my score of 31/40 with most of my misses being splits.  Only two shots were from not figuring my wind hold off correctly.  I continue to learn.

Likewise, Bill Y. was the only Hunter/PCP shooter this month.  The club has a number of hunter class shooters, but they were not in attendance this month.  Hopefully that will change with upcoming matches.

While on the subject of promoting, we want to give a big shout out to Airguns of Arizona.  During our shooters safety meeting prior to the match, it was announced that Airguns of Arizona was once again picking up the match fee.  This was met with a resounding round of applause!  The members are certainly appreciative of that and of the fact that Larry Piercy, our club president, was on hand with the PAD van.  After the match, Larry had several of their really big bore targets set out at distance and some of the guys were shooting away at them with the big bore air guns.  Larry also had the air compressor working and was filling air tanks.  A big thank you to Airguns of Arizona for promoting the air gun shooting sports and our field target club in particular.  A lot of the members bought a lot of guns and gear from them over the years and will continue to do so.  Thank you for your generosity. 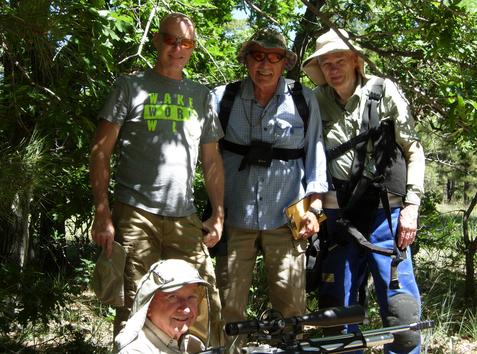 Most of the group.  Several were missing or already departed for the day.  We had a good time! 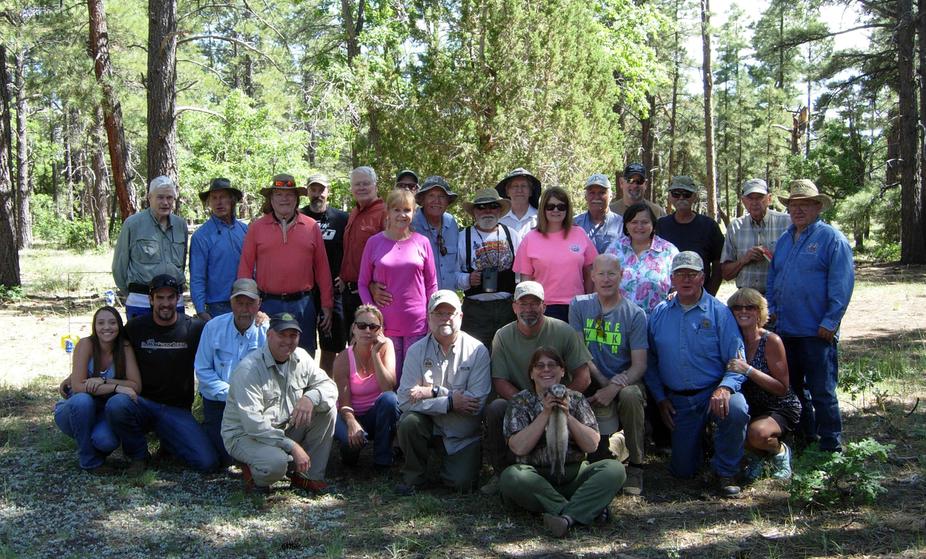 Next month’s match will be back here in the pines on Saturday, July 16.  How many shooters will be here then, I don’t know.  Why don’t you come and find out for yourself.  Guaranteed you will have fun.  If you don’t, its your own fault.  See you then. 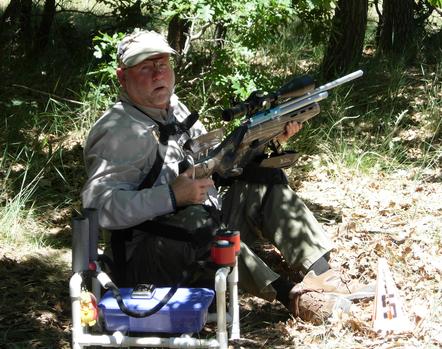 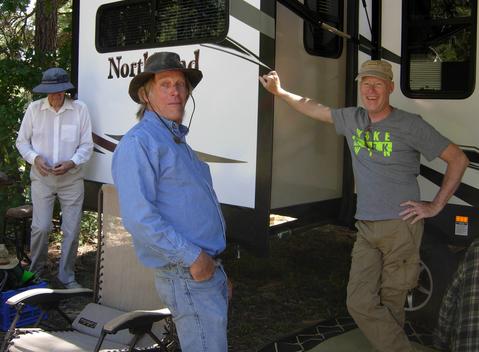 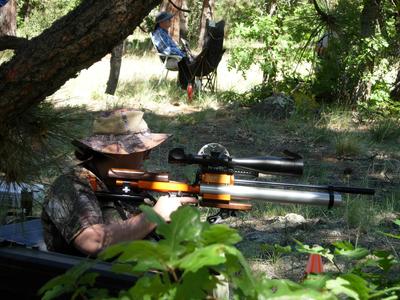 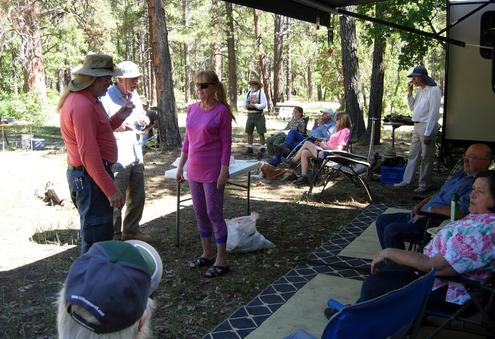