What are you looking down here for???

….and then there were TWO!  Today it was just Barry and yours truly shooting the course; our usual 5 lanes / 2 targets / 20 shots / move targets at halfway point / do it again / 40 shot match.  Dan joined us but was busy at the sight in side of the range getting his guns set up so he could shoot in upcoming matches.

The weather report called for clear weather with winds from 5-15 mph increasing and gusting up to 25 mph.  Guess what?  They were right!!  The sky was sapphire blue with patchy cumulus clouds that were moving rather rapidly.  A cloud would move overhead and darken the ground beneath.  It looked like an Indiana Jones movie where the ant swarm covered everything and moved with rapidity up and over the hill and then gone.  The wind did come from behind us moving from the south and southwest, so it was predictable.  The temps at 9:00 were 64 degrees and warmed up to 70 when we finished, but it felt cooler with the constant wind.

The funny part about today?  Barry was getting text messages from the other guys (the ones that didn’t show up today) asking “how bad is the wind”, and “who else showed up” and stuff like that.  Mike had a valid excuse; his wife went in for surgery this morning, so he has a pass.  The other guys?  Well……..

Barry and I still had a good time.  He was laughing because the wind would die down a bit when he shot and picked up dramatically when I shot.  It happened darn near every time and he laughed each time it did.  He thought that was funny as the dickens.

We finished up by 12:00 and had everything taken in and replaced in the storage container by 12:15 and on the road.  Next Tuesday will be the last installment for the old farts league, so if you haven’t shot yet, you have one more chance to do so. 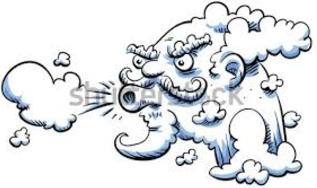