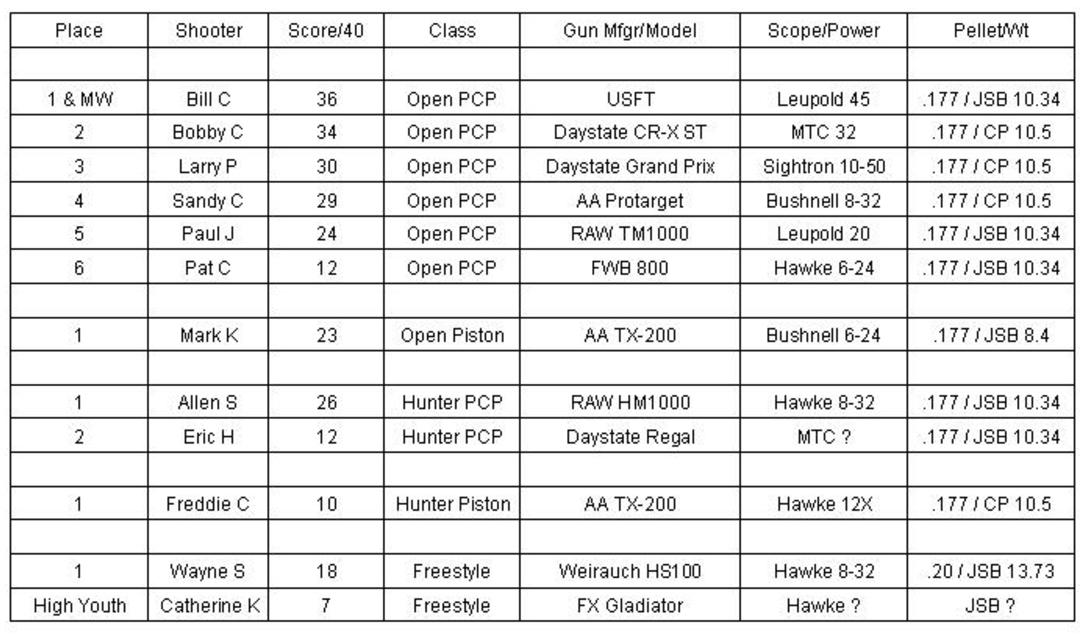 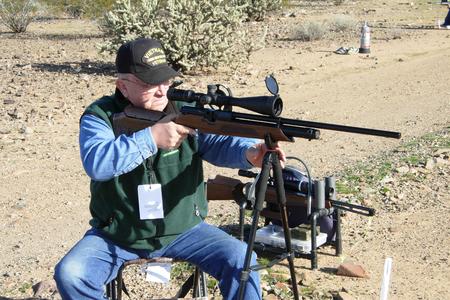 Also, this month, Airguns of Arizona paid the range fees for all the shooters, and we thank them very much for their generosity.  In addition, Larry Piercy was on hand with the PAD (Precision Airgun Distribution) van showing off new guns and refilling air tanks.  He does his best to compete and participate in the local matches when he is not traveling around the country.  He is also our club president and one of the founding members of the club.

We had 12 shooters today, several of whom were first timers; Pat from Las Vegas, Freddie from Prescott, Eric from nearby Cave Creek, Allen from only a few miles of the range, and then there was Catherine.  Catherine is Garrett’s cute little 8 year old daughter who shot her very first field target match using daddy’s tutelage and knocked down her very first target on her first shot!  It was neat to see that much enthusiasm.  We have had several inquiries about youth shooting at our matches and we welcome that.  Ben Avery shooting range does not charge a range fee for kids shooting the matches, and neither do we.  Of course, they have to be accompanied by a parent.  This is the future of the sport and we want to encourage them as much as possible. 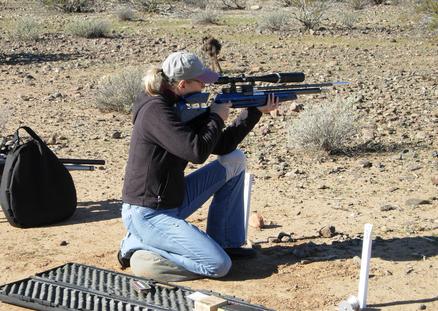 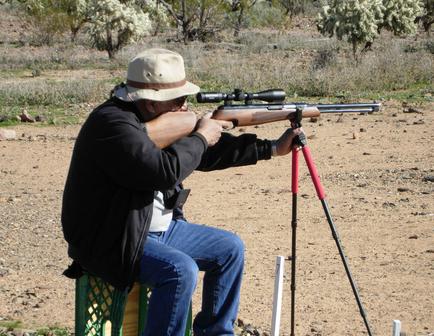 Bobby on the sight in range shooting his CR-X ST

A great big thank you goes out to Wayne S. for traveling from Flagstaff to help set up on Friday.  Thanks to all the shooters for helping to take down all the targets afterwards and return them to storage until next month.  That is a big job that only takes a few minutes with everyone pitching in, and is greatly appreciated.  Thanks again to Larry and Airguns of Arizona for their generous support of the club and the sport of airgunning.

With the winners announced and the awards presented, a few folks had to leave for their long trek home while others plinked on the sight in range and tried some of the new guns from the PAD van.  Afterwards, eight of us reconvened at the Tennessee Grille, just north of the range in Anthem, for some excellent BBQ.  I can attest that the pulled pork and brisket sliders were amazing!  We will be patronizing them again real soon, and for those driving down from parts north, they serve breakfast, as well!

Looking over Wayne's shoulder at the 47 yard skunk target.

The sun was just right and you can clearly follow the string to the target set in the cholla forest. 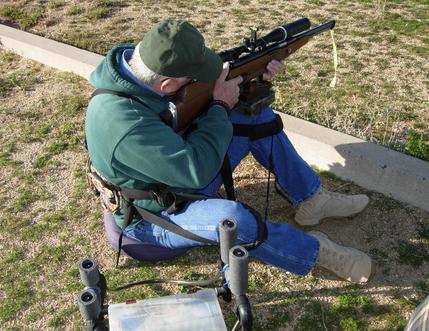 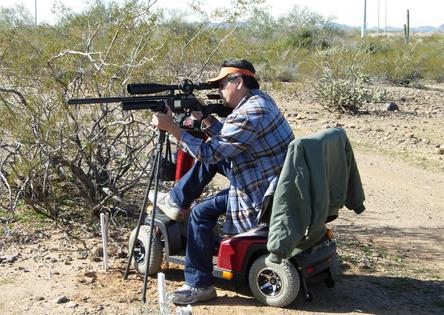 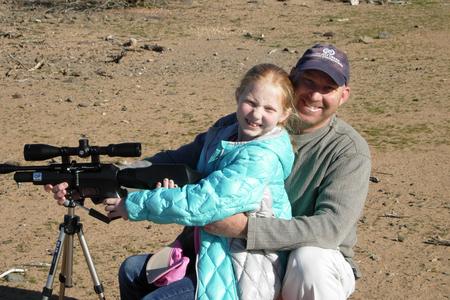 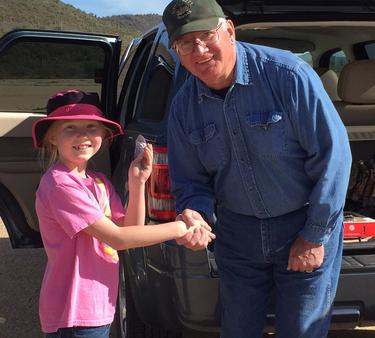 All smiles after knocking it down

Catherine taking her first shot and being coached by dad, Garrett. 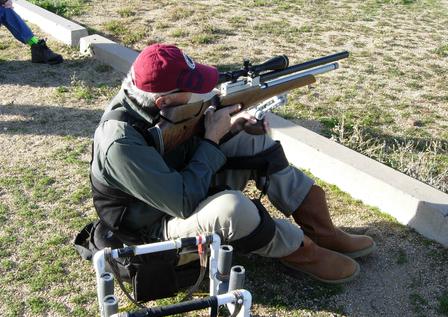 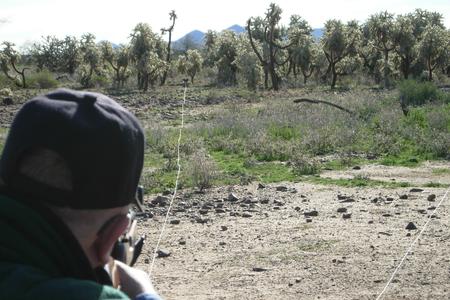 He has to keep his hood up to keep from blinding the rest of us with sun glare.

Anyway, we took our time, plotted out some neat areas to set targets and selected ten lanes to position and level the concrete blocks that the targets are mounted on so that we had two on each lane for a 40 shot match.  I hadn’t quite figured on enough ground clearance on one of the targets. Due to a swell in the terrain between firing line and target, only the top of the target was visible from a sitting position.  So this became an unanticipated forced position shot of 47 yards with a 1 ½” kill zone.  This worked out to be a 50.92 Troyer (kneeling) target on an otherwise 34.04 Troyer course of fire.  This didn’t bother the Hunter or Freestyle shooters, but I got some good natured ribbing from the open class shooters and one female in particular.  Sorry, Sandy, I could not resist.  I am also sorry that you were the ONLY one who experienced any wind, too…LOL. 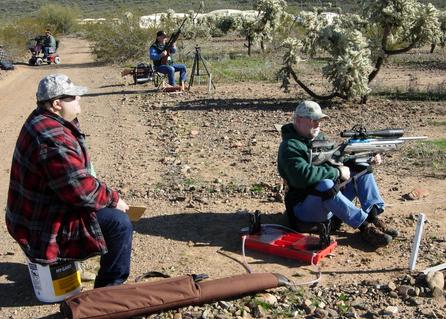 The first field target match for us this year started out looking cold and dreary, but warmed up nicely with high, wispy clouds.  The sun was bright and created a bit of a challenge due to the fact that half of the course was set up looking east, into the sun, while we were only able to use part of the western facing course.  It worked out to our benefit and we were able to compress the distances so that we did not have to walk so far in between lanes.  It is nice to have almost 30 shooting points to work with so we can vary the course complexion from month to month.  By the end of the match, the temperature warmed up to a balmy 59 degrees and was quite comfortable.

Wayne S. drove down from Flagstaff on Friday morning to assist in setting up the course.  The reason we decided to use these particular shooting lanes was due to the amount of rain that we experienced in the week or so prior to this month’s match.  There were stretches of Dead Man’s wash that had over 3 feet of water in it that prevented us from setting targets on the other side.  It is not quite the “Wild West” anymore, but it is still pretty cool to have a stretch of stream bed known as Dead Man’s Wash.  It is also easier to pronounce than Schuylkill River, from where I once lived.  I can still spell it and pronounce it. (That one’s for you, Carl) 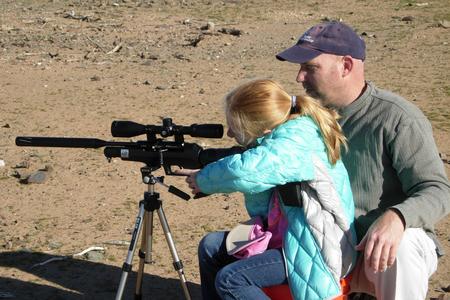 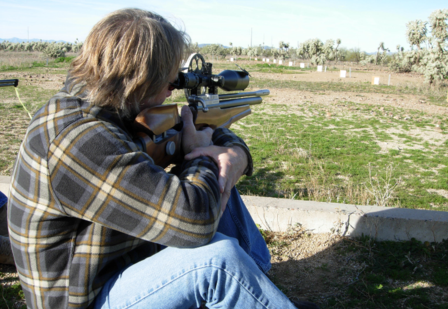 My partner for this match, Wayne, shooting his HW HS100

We had five classes competing today as well.  While most of our shooters still prefer Open PCP, we contested Open Piston, Hunter PCP, Hunter Piston, and Freestyle.  Match winner for this month was Bill C. shooting his (new to him) USFT and sporting neon green socks as his good luck charm.  It must work because he only dropped 4 points and shot very well.  Here are the scores: 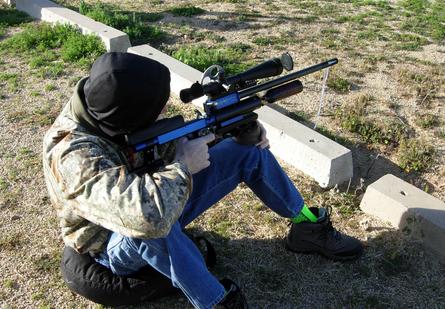 Here is Sandy showing great kneeling form on her favorite target of the match. 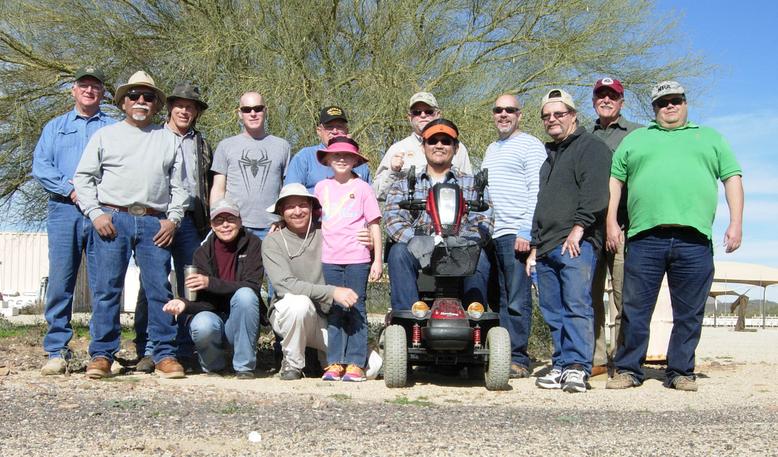