We are back up in the pines of northern Arizona for the summer months, and although it is cooler than the valley (Phoenix), the temps were still in the upper 80’s with only about 3 to 5 mph variable wind to cool things a bit.  We were lucky to be able to use the venue this month due to the stage 1 fire restrictions that are currently in place, forest wide.  Numerous wildland fires are burning throughout Arizona, and we could see the smoke columns from the fire at Kendrick Peak to the north, and had members drive though the area where fires were burning to the south near Happy Jack.  We notified everyone coming to the match that the use of campfires and open flames were not to be allowed as everything is tinder dry.  We look forward to the start of the monsoon season in the coming weeks and the eventual rains that will be generated from that.  The venue that we use is beautiful and we would not like to see that changed through the carelessness of others and certainly not on our part.

That being said, we still had 23 shooters brave the temps to travel to the high country.  We had Don travel over from northern NM, and Rex and his wife travel from southern NM to shoot with us.  Each stated they had an uneventful trip and really enjoyed the trees and shade of Mormon Lake.  Likewise, Pat traveled over from Las Vegas, NV to shoot with us again.  We offer a good time, camaraderie, and competition in a relaxed atmosphere and folks want to take advantage of that.

View along firing line showing Vance on left, Bobby in background, and Nathan B on right 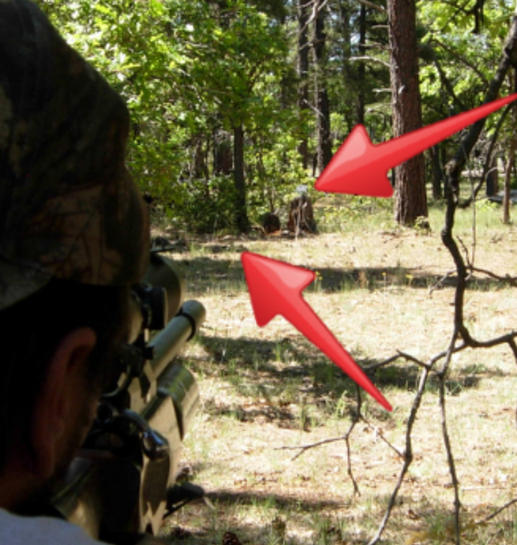 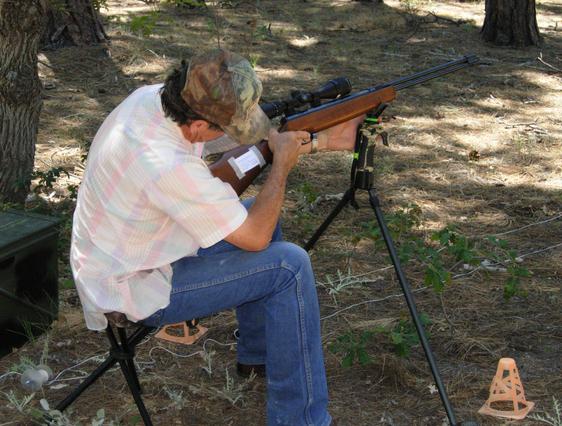 In Hunter PCP, Rick F put on a clinic shooting a 43/48 with Don B close on his heels with a 41/48.  My shooting partner for the day, Ben S, took third with a 39/48.  What is interesting about Don’s score is that he built his Crosman 2400KT himself as an HPA modification.  It looks kinda weird, but BOY can he shoot it!

Mom and daughter (Liz and Sonja) waiting while dad (Nathan) fills up the air cylinder on their gun.  Sonja would go on to take top honors in the youth category this month.

Freestyle class was once again dominated this month by match director Steve M who shot a clean score; 48/48.  Fantastic shooting!  Hot on his heels were the old man (Mike) with a 46, followed by the Bergermeister with 44 and Steve’s wife, Robin, with a 40.  Lots of good scores being posted this month.

Last month, in the youth category, Ethan took top honors, but this month his older sister really pulled ahead and outscored him by 11 points.  Interesting little family rivalry going on here.  It will be very interesting to see these scores continue to improve as time goes on.  These kids are gonna be good!  Let’s see if mom and dad can keep up. 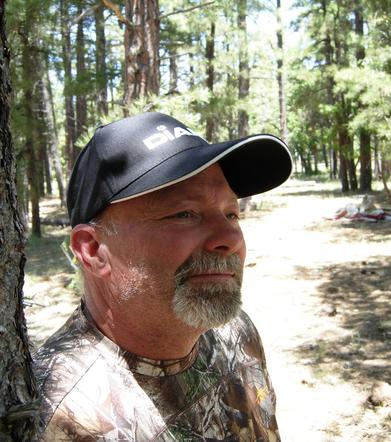 Next month we will be back here at our summer quarters at Mormon Lake.  Hopefully, we will have some precipitation to cool things off and minimize the fire danger.  The match will be Saturday, July 15 (third Saturday of the month).  C’mon out and join the fun.

Special thanks to Steve and Wayne for setting up the course this month and for all of those who stuck around afterwards to help take in the targets.  It is greatly appreciated. 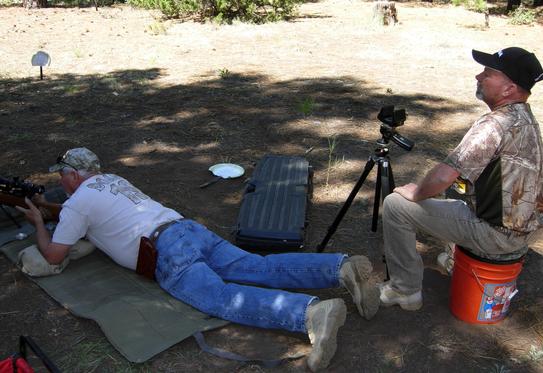 The "old man" (Mike) is shown here shooting, with Steve scoring.  Steve would go on to win Freestyle class with a perfect score. 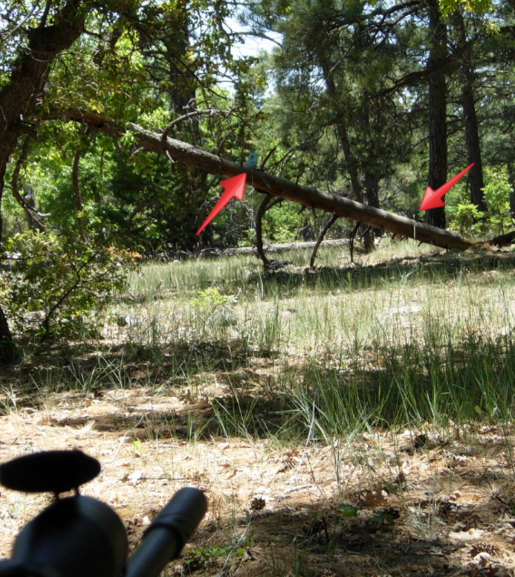 Rex, from NM, setting up to take his shot 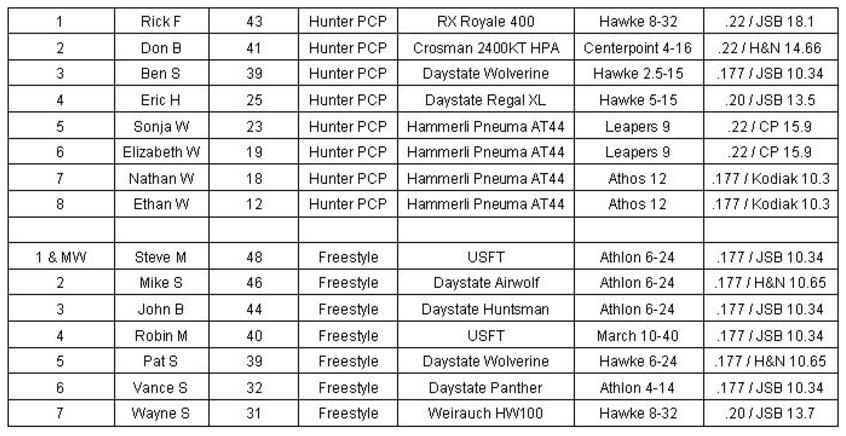 John nestled in the shade getting ready to take a shot.

In Hunter piston class we had two shooters that battled back and forth.  Rex edged Cole for the win during the match, and were found comparing notes, guns, and technique after the match.  We have been attempting to promote more piston shooting and I found myself being drawn into the discussion they were having.  For next month, I will bring along my piston guns for them to inspect and to check out the attributes of each.  Instead of shooting piston, I chose to shoot Open PCP this month after being badgered by some of the group for wanting to shoot a sproinger.  As a result, I ended up shooting a 47/48 for first, with Bobby in second with a 45 and Carl, Nathan, and Sandy right behind with 42, 41, and 40.  Hey, I had to prove that I still know how to shoot…..LOL! 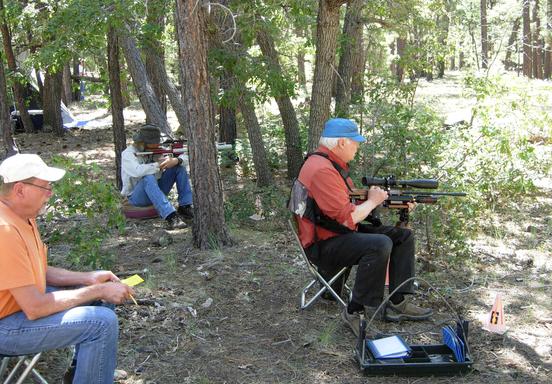 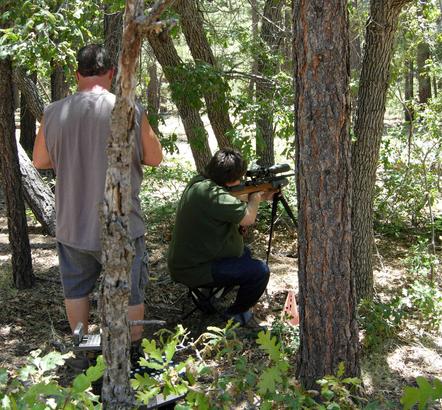 Steve is our match director shown here pondering his next target while waiting his turn to shoot.  He would go on to shoot a perfect score for this match.  He also told me he should have stuck his finger in his nose as I was taking his picture!

Looking over Ben's shoulder.  He dropped the near target twice and shown here just as he finished dropping the far target.

We contested four classes this month with multiple participation in each class.  Match director Steve M and club VP Wayne S showed up on Thursday to set up camp and by the time a few of us arrived on Friday to help, they had the course set up and ready to go.  With the increased attendance we have been getting at our matches over the past year or so, we decided to increase the number of lanes to 12, each with 2 targets for a 48 shot match.  This calculated to a Troyer rating of 30.04 without any other multilpliers other than the one forced position target.  As stated previously, the wind was light and variable.  It was evident, but not as prominent as in past months.  We had easy targets as low as 15T and 17T up to a whopping 46T and 56T.  Something for everyone.

Rick is scoring for Eric.  Rick went on to win Hunter PCP class

Location of targets.  Unfortunately, my camera did not pick them up as clearly as I would have liked........Sorry. 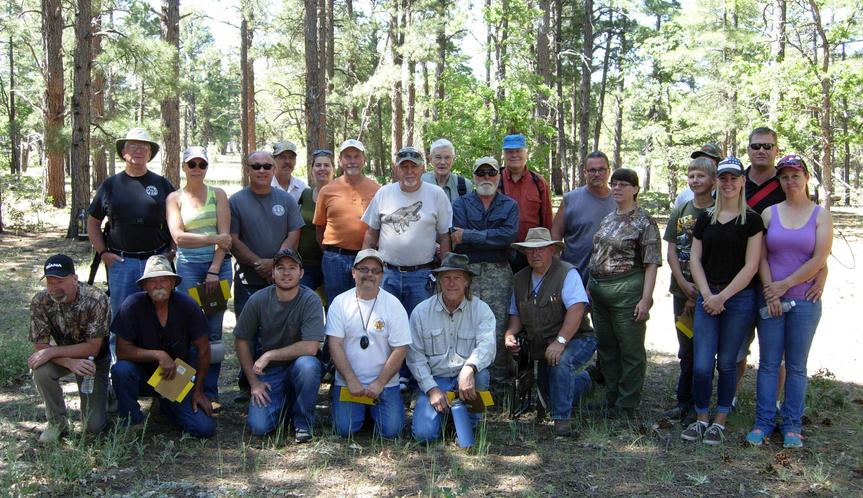 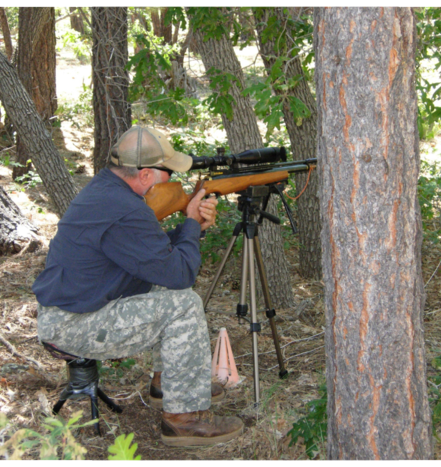 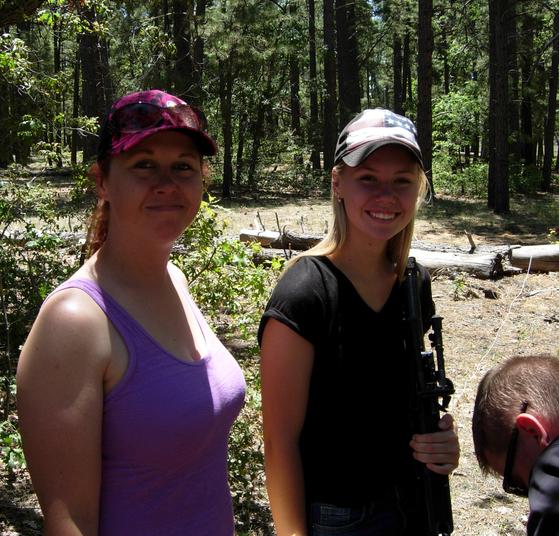