Here is our crew for this month with picture taken after the rain.  Note how angry the sky looks in the background.

While on the subject of thank you’s, we want to thank Debbie for taking all the photos for the match.  She and hubby “top hat” Tim traveled from Lake Havasu City to join us, as did Cecil and his father-in-law, Mark.  Bill Y was also there from LHC, but opted not to shoot due to a bad back, so he assisted some of the new shooters with advice and moral support.

We are indebted to Steve and Wayne for doing the lion’s share of setting up, and also thank everyone who assisted with taking the targets down afterwards.  That is always a big help and is greatly appreciated.

OK, here is Doc waiting for Scott to shoot.  He's waiting....and waiting.... and waiting.  Why isn't he shooting?  Upon closer examination, Scott appears to have fallen asleep at the switch.  Long work hours and two small kids can do that to you, but this is ridiculous!  Thanks Deb for taking a great candid shot that we can tease him about, even if i know he is going to kill me for it later.  If nothing else, we DO have fun at our shoots. 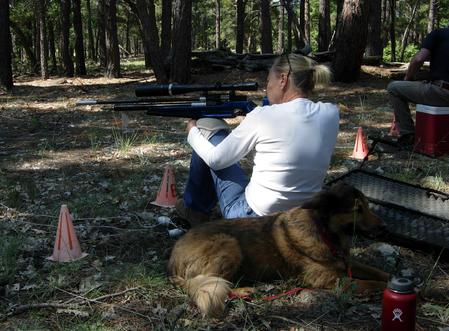 All but 3 lanes had 3 shooters squadded together, which worked out well.  Each class was well represented with 10 shooters in Open PCP, 4 in Hunter PCP, 12 shooting in Freestyle, and yours truly the only holdout in Open Piston.  One of these days we will get some more of the piston shooters to come out and give it a try.

As it stands, some of the new shooters are using the Freestyle class to learn the game before they decide which AAFTA competitive class they want to gravitate towards.  Of course some of the guys are just having too much fun in Freestyle and are real characters to boot.  John B, the ring leader of these characters, even brought along his Airgun “Technical”; a Kawasaki 4x4 ATV with canvas cover and mounted gun cases.  His eyes brightened up when I asked him if he had a turret mount on top for his air rifle.  Fortunately, he only used it for transport instead of as a shooting platform.  Our club version of freestyle is anything goes so long as it is 20 fpe or less. These guys are having fun shooting, and the class does draw its fair share of shooters.  They add a lot of “flavor” and not a small amount of laughter to the monthly matches.

The rain did not damper anyone’s spirits and some pretty good scores were posted.  We had tied scores for first place in Open PCP, Hunter PCP, and Freestyle.  We used the offhand lane for the shootoffs with each competitor shooting one shot at each of the two targets; one with a  ¾” kill zone and the other with a 1” kill zone.  First up was Bobby C. and Scott R in Open PCP with both having shot a 34/40.  After the first round, they were still tied.  On the second go round, Bobby came up victorious.

Next up was Freestyle with Steve M and Dewain M also having shot matching scores of 34/40.  Steve came out on top of that matchup.  Finally, the Hunter PCP shooters, Rick E. and Doug T. took their places.  These guys showed everyone how it is done with scores of 35/40!  Doug put on a clinic by narrowly edging Rick for the class win and earning the Match winner title for this month.  Not bad for only his second match.  You think he might know how to shoot?  Good job and good shooting by everyone under some interesting conditions. 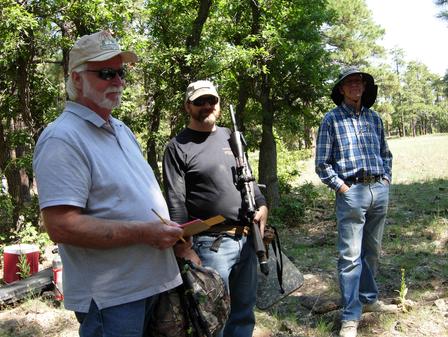 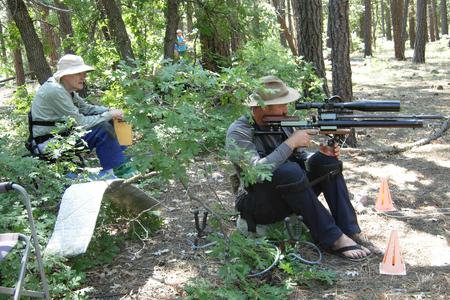 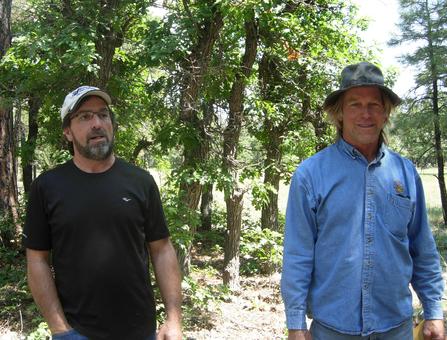 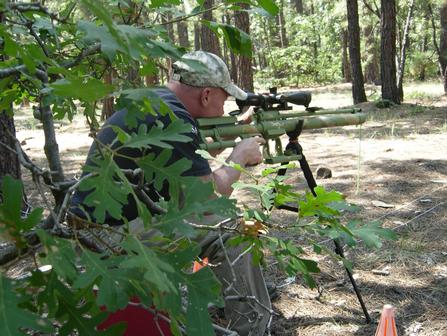 After our 9:45 shooters safety meeting and lane assignments, the match started promptly at 10:00.  The temps were warming nicely, the sun was bright, and the shaded shooting positions worked out very well…..for the first hour or so.  The sky started to cloud over and we started to hear the rumbling and grumbling of thunder off in the distance.  Turns out that this storm cell took dead aim at us and by about 11:30 we called a time out to get under cover and protect the guns from getting too wet.  There was no lighting, but lots of thunder and plenty of rain.  Good time for a lunch break. 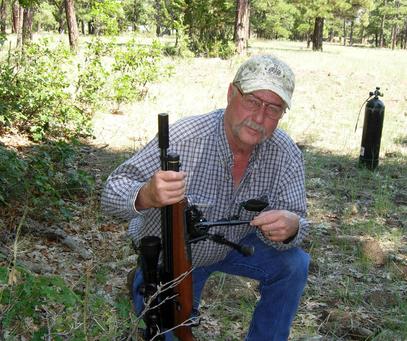 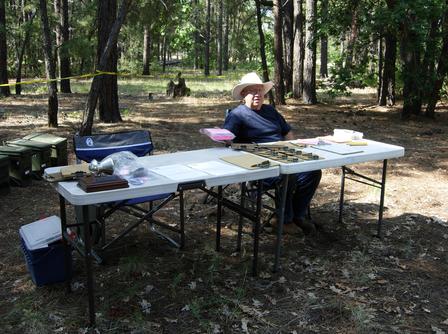 Can't forget the wive's.  The ones that are not shooting are pictured here enjoying the surroundings.  Debbie, in upper left, took all the photos depicted here.  I had 116 of them to sort through to come up with what you see  here.  I could have used them all.

Next month is the Arizona State field target championships and AAFTA grand prix match on September 17 & 18.  Quite a few of the shooters took the opportunity to fill out the registration form and turned it in before the September 1 deadline.  We have already gotten a number of entries in the mail as well.  There should be a good turnout and a great time for everyone. 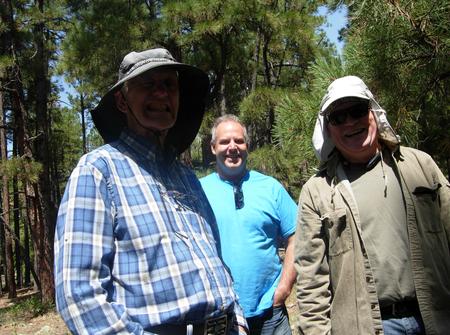 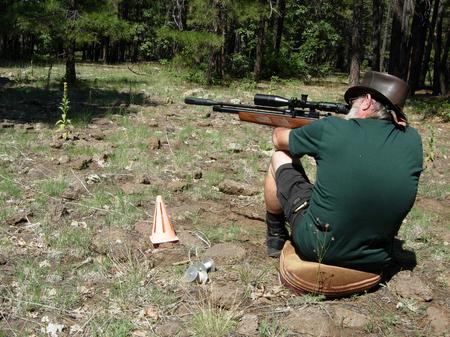 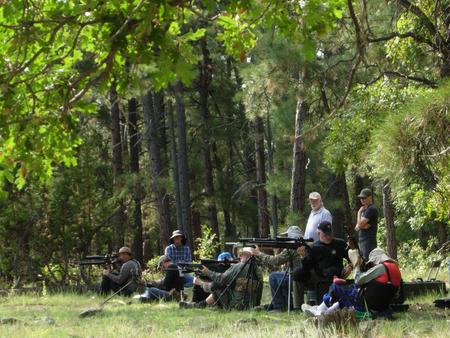 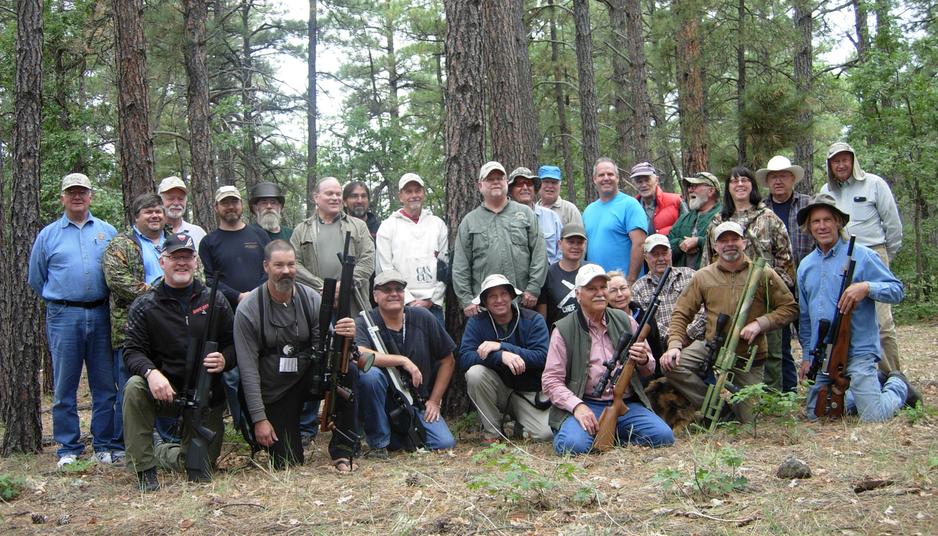 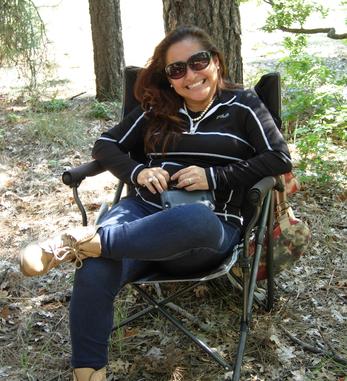 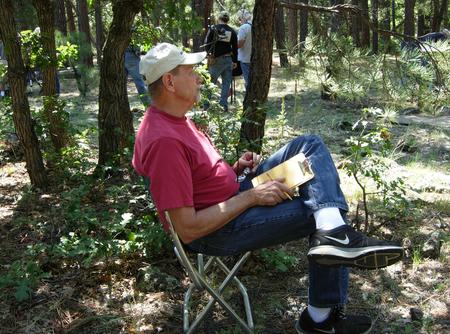 Doug and Rick.  Scott in background 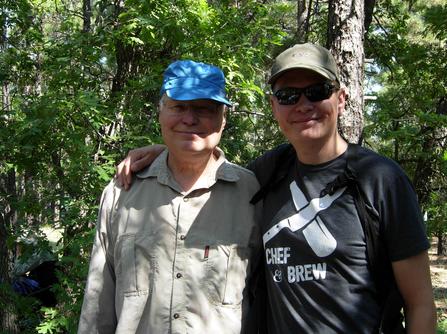 I am not sure where to begin this months report; the weather, the range setup, the competition, the results, or the attendance.  They all interacted, so I will start at the beginning….

Friday morning Steve and Wayne started laying out the course and setting targets.  By the time I arrived they had a good head start but then it began raining. By the time we finished, with everything set and ready to go, we had gotten fairly well soaked in the process,   Steve laid out an “L” shaped course that was perpendicular to our normal direction of fire; with 7 lanes on a north to south direction so that we were shooting to the west, and then the last 3 lanes situated west to east so that we were shooting to the south.  We hadn’t used this portion of the site in the past, but it did make for some very interesting target positions.  Some areas were open and others were quite thick with vegetation.  We had one lane designated for offhand and one lane for kneeling.  The Troyer factor for the 40 shot course was 31.34 figuring in the 5 targets that were between a T42 and T44.  It may have been somewhat less but conditions changed during the match.  More on that in just a bit.

After the set up was complete, the rain stopped, the sun eventually returned, and the rest of the evening was clear, albeit cooler.  The full moon in the cloudless sky at night created so much illumination that flashlights were not needed.  Sitting around the campfire was quite pleasant and knocked off the chill.  Nightime temps got down into the high 40’s for the 10 of us that camped there. 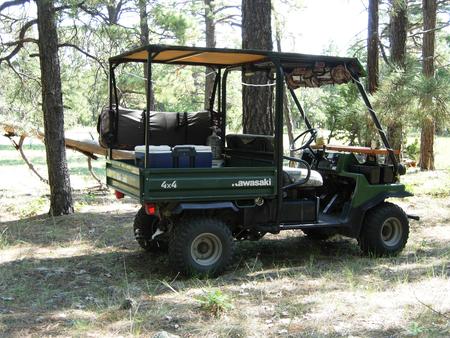 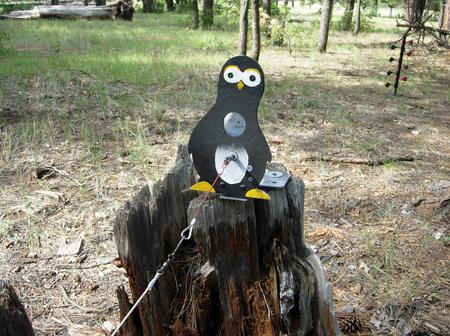 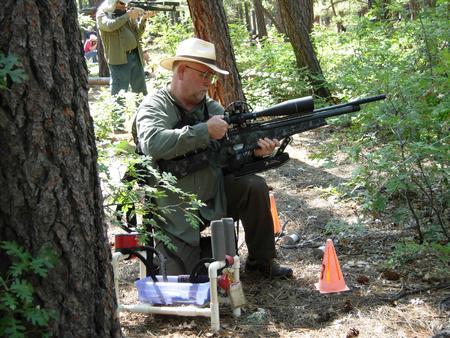 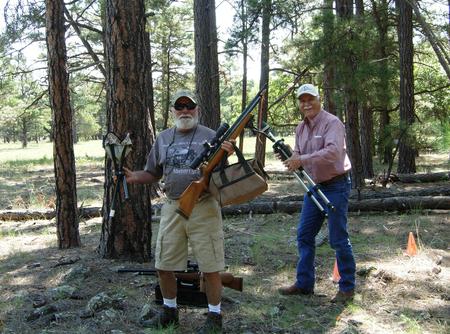 Larry in foreground with kneeling shot.  Darrell in background with offhand shot

Mark getting ready to stretch the legs on his piston gun. 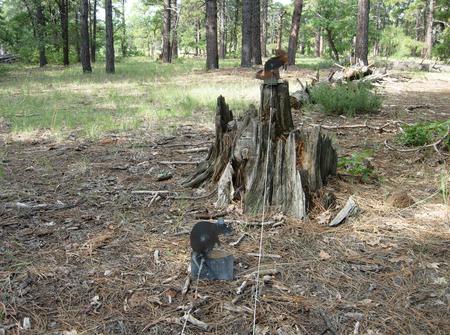 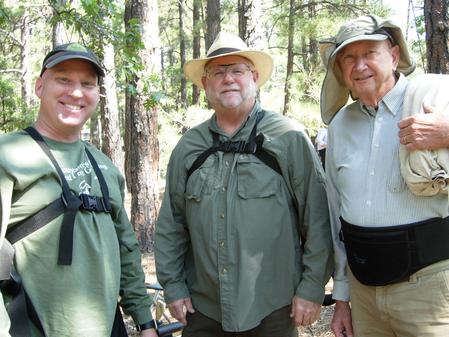 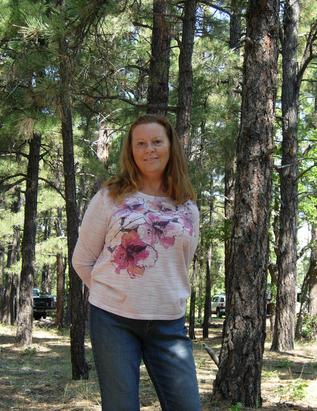 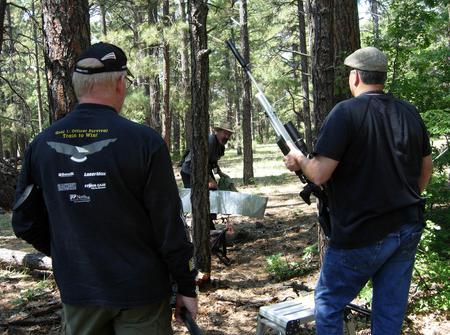 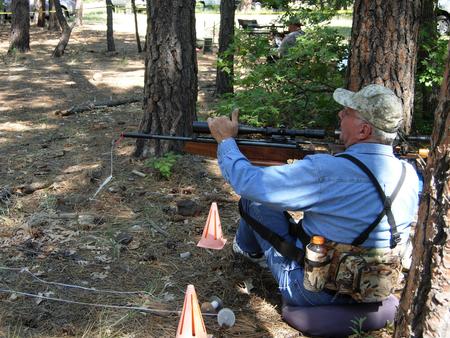 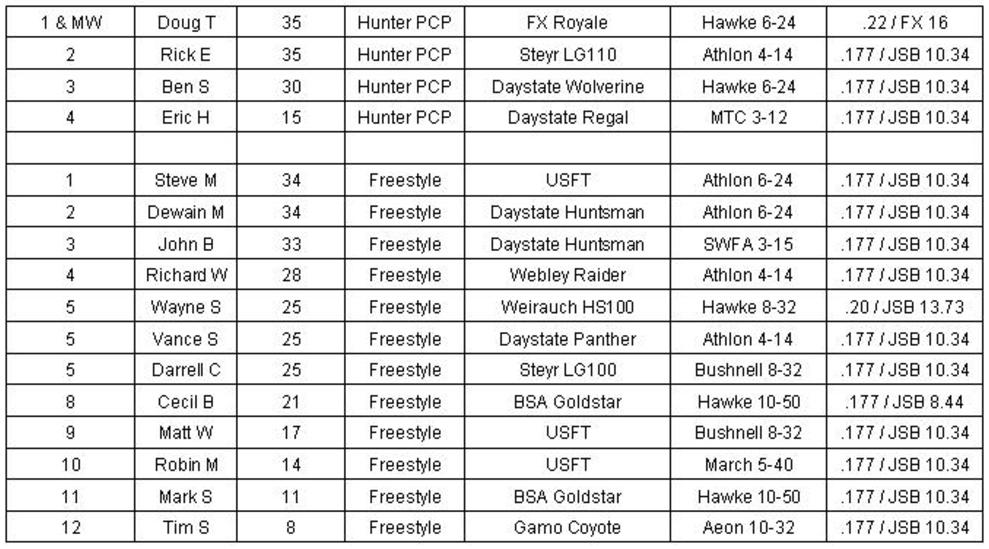 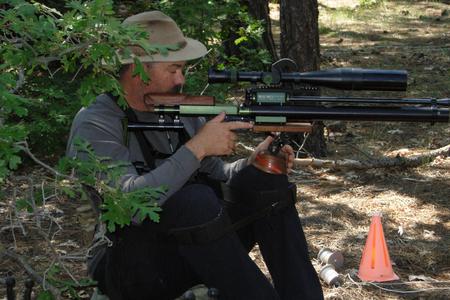 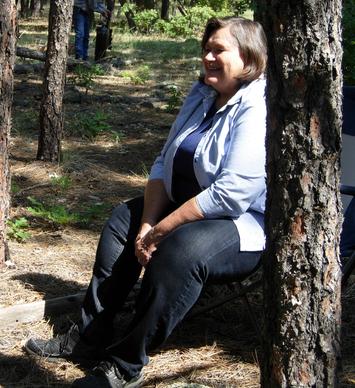 Airguns of Arizona got another spontaneous round of applause from all the shooters when it was announced that the match fees for this month’s match were going to be covered by them.  Another big thank you goes out to them for their support of field target and for allowing Larry to bring along the PAD van.  This is filled with all kinds of Airgun goodies and Larry also spends a bit of time after the match refilling air tanks and allowing everyone to shoot the display guns.  He even provides pellets!  Thank you Airguns of Arizona.

By 12:30 the rain was letting up.  A decision was made to reconvene at 1:00 pm when the rain stopped.  A second storm cell was working its way south just to the west of us and we only caught a bit of shower activity during the remainder of the match, but still with a lot of thunder to keep us second guessing.  Conditions were much DARKER and easily 20 degrees or more cooler as well.  That second cell must have hammered the Mormon Lake area.  Upon leaving later that afternoon, there were large patches of what looked like snow on each side of the roadway for about a mile or so.  Turns out that it was probably hail that hadn’t melted yet.  Very strange for August in Arizona. 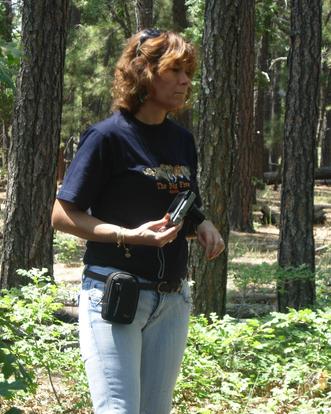 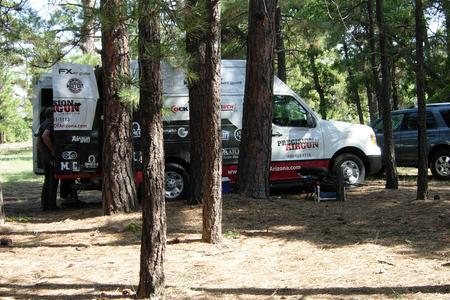 Saturday morning dawned bright and clear and gave us the impression that the weather people may be wrong for once.  The NWS called for a 60% chance of thunderstorms, but it sure didn’t look like it.  The competitors started to arrive and kept coming, and coming, and coming!  We ended up with 27 shooters for a monthly match!  Several who said they would be there did not show for one reason or another, but we still had a lot of people who took a chance on getting wet and turned out anyway.  All told, we had 35 or 36 folks in attendance to enjoy nature and/or shoot with us.