Barry and Mike setting up for their shoot off.

We had 15 shooters in attendance along with 3 other shooters present who did not compete.  Wayne, Don, Kent, Larry, and myself had the course set up and ready to go by just after 8:00 am.  At 9:45 we had our shooters safety meeting and lane assignments, and then the fun began.  There was a fair amount of quite colorful descriptive verbiage emitted related to the wind, but everyone was in the same boat and had to deal with the conditions.  With my size and girth not being on the small side, my body acted more like a sail.  When the wind hit, the reticle in my scope jerked inches above the target.  Fortunately, I had enough Kleenex to wipe my eyes and runny nose throughout.  What fun!

As with last month’s report, I asked if anyone would like to submit their take on the festivities.  Here is “old man” Mike’s thoughts;

“I got to the range about 8:30 and the temperature was about 48 degrees. Went to the practice range and the cold north wind about blew me over. I thought to myself this is going to be a challenge. The match started about 10 am. We had 15 brave souls paired into teams.

The competitors ranged from open class, Hunter PCP, Freestyle, junior and Springer.  There were 10 lanes with a total of 40 targets.

Once on the firing line, the wind got the okay to really blow.  I was teamed with Bobby and we started on lane 2. I was shooting hunter PCP and the wind was so strong it would give a gust and blow you out of the kill zone.

Larry brought out a Kestrel wind meter and measured the wind at 7-15 mph! (Think it needs new batteries) but it felt like a hurricane! I have shot in wind before but this was a doozy!

The firing line was very quiet with the occasional “Crap” yelled out by Sandy!

With about 2 lanes to go the wind died down to where it was manageable.

Our junior shooter, Steeler, did a super job with his new Brocock Commander that he just received yesterday.  I think his dad (Dan F.) has his eye on the rifle!

I don’t know what the Troyer Factor was but it had to be 60 or more.

Cole shot an amazing 33 in Open PCP class. Barry and I both shot a 30 in Hunter PCP and ended in a shoot-off. We started on a frog target with a 1” kill zone at 40 yds and after 3 shots each, we both missed. The target was moved to 30 yards and we both hit 2 times. It was moved to 35 yds and I hit and Barry missed.

Even with the strong hurricane type winds we all had a great time!

We appreciate all the help setting up and tearing down the range.

I must admit with no vegetation to give you an idea what the wind is doing it is a tough range!

Again, thanks for all the help and all shooters for braving the wind!” 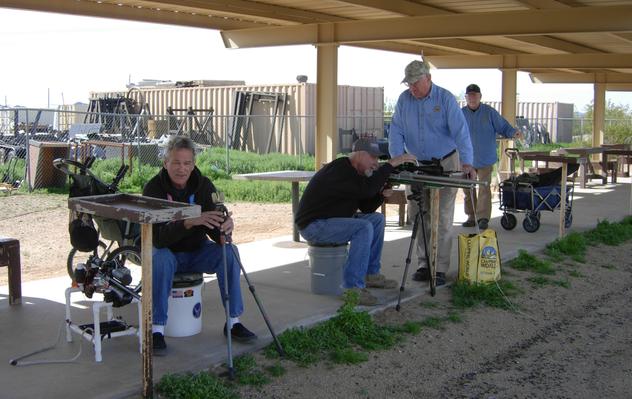 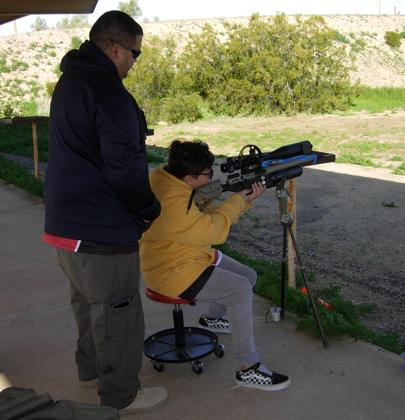 This is Larry somewhere behind all of that clothing.  He is shooting his Grand Prix

A couple pictures of the course.  On the left is the elevated target stand that was built by Wayne and worked great.  it can be collapsed for storage.  The range faces north, but the winds come in and hit the hillside beyond the berms and swirl about the area.  Ben Avery range is renowned for the wind conditions. 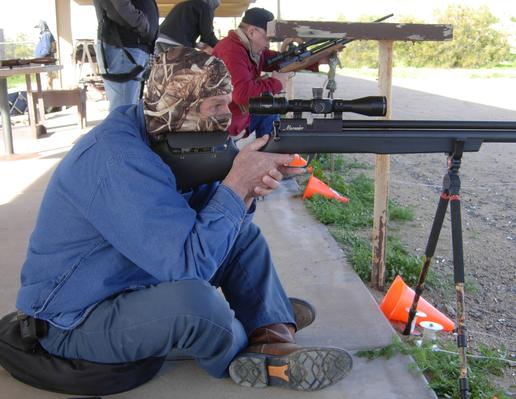 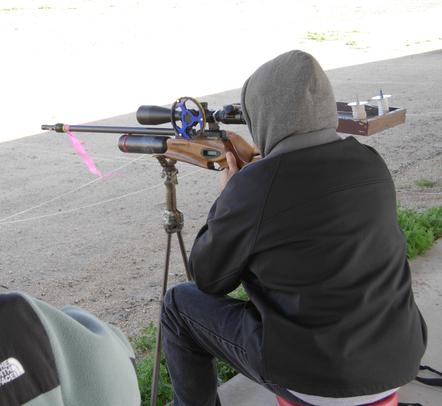 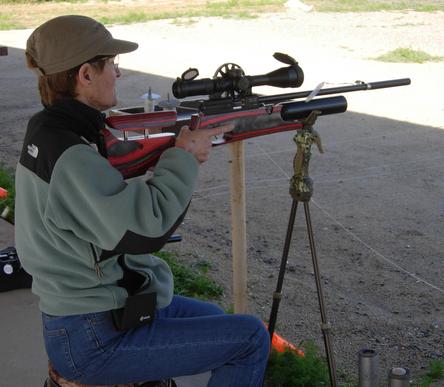 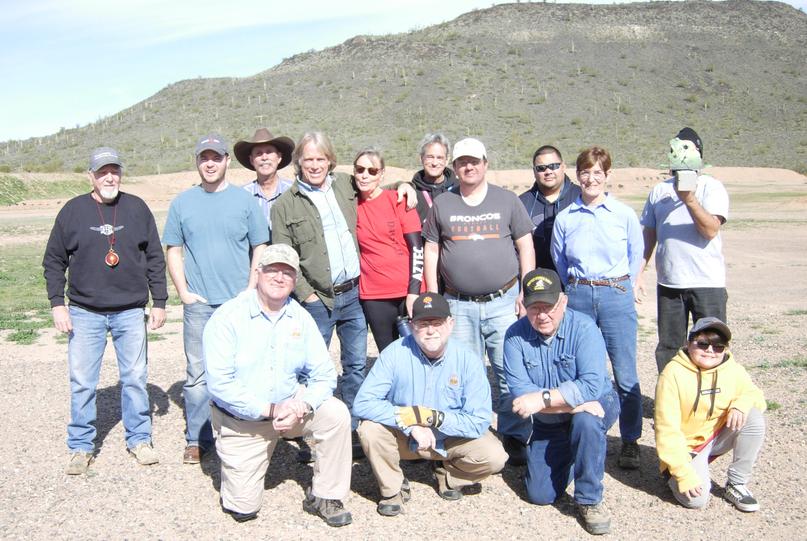 After the match, everyone pitched in to roll strings, pull targets and blocks and load everything onto Wayne’s truck to return it all to our Conex storage container.  This took maybe a grand total of 15 minutes.

Awards were announced and presented and a short membership meeting convened, then everyone was off and on their way until next month.

We are incredibly blessed to have such great members as everyone pitches in to help when needed.  Thank you to all of you who assisted.  Thanks also to Don, who took all of the pictures today.  Many thanks to Wayne who built our elevated target that we tried today.  It moved just a bit but worked very well.

I think this is Barry all bundled up

Group shot AFTER the match when the wind died down and it warmed up a bit. 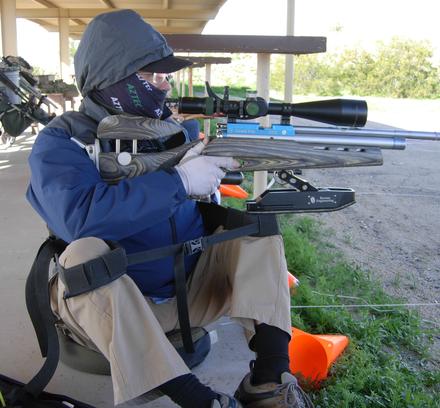 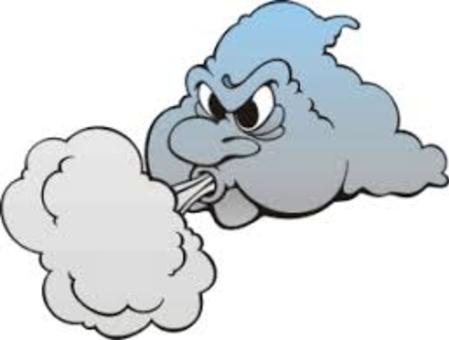 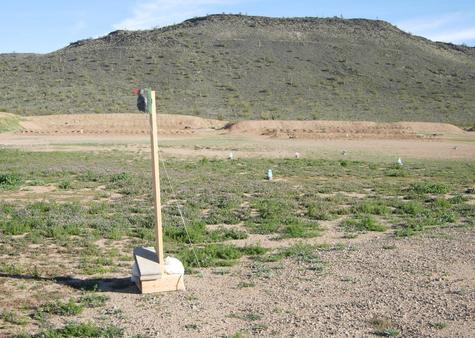 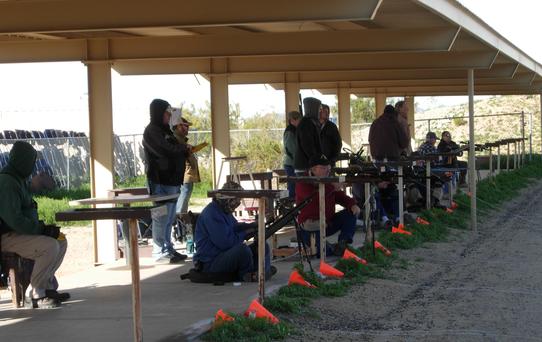 We had to lay the cones down facing into the wind.  They were getting blown to the back fence when standing up 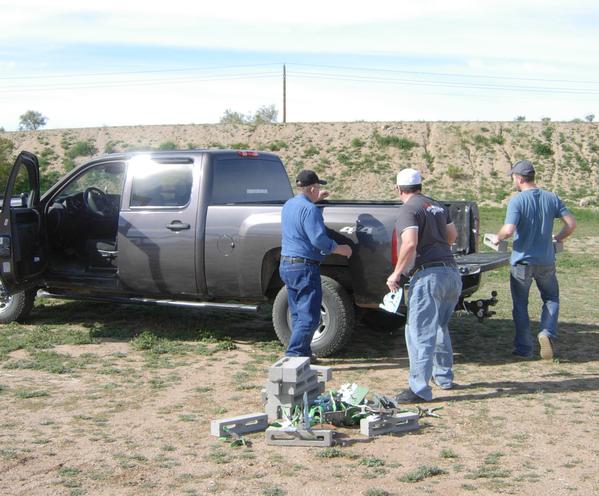 Next month’s match will be on Saturday, February 16 but will be located on the DPS range, next to our Conex container.  This is due to “Winter Range”, the cowboy action shooting events that occupy most of the ranges on the west side of the facility.  A notice will go out ahead of time. 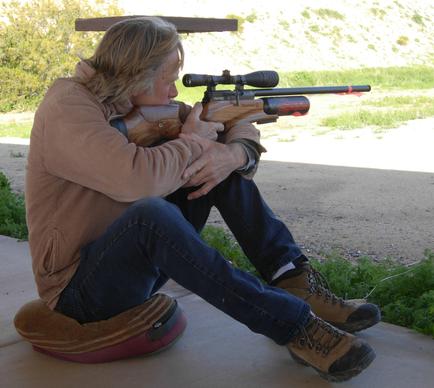 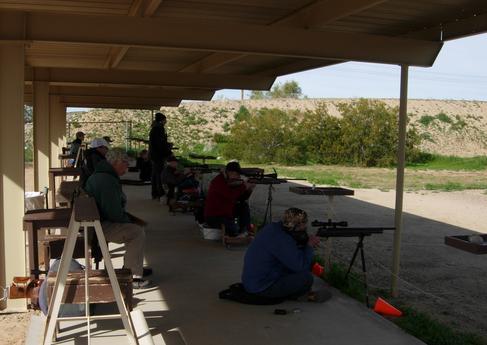 This was our first match of the new year and Mother Nature wanted her presence to be known.  The day was clear with bright blue skies and brilliant sunshine.  The temps upon arrival were in the upper 40’s and the wind was howling!  The flags atop the flagpoles at the facility entrance were straight out and snapping.  The National Weather Service forecast the temperature to reach 71 F and winds of around 5 mph.  Somebody goofed!  It did get warmer, into the upper 60’s and the wind did die down to a reasonable velocity by the end of the match.

Regardless, we set up 10 lanes with the usual two targets per lane for a forty-shot match.  Due to the north facing direction of the range, the wind was right in our faces, varying maybe 10 degrees from each side as the match progressed and affected by how the wind was redirected from hitting the hillside beyond the impact area to the north.  Club prez, Larry P had his Kestrel out taking measurements that indicated the winds were about 13 – 15 mph.  They were gusting much higher.  When plotting out the course on paper, the Troyer factor was calculated at 31.08, but with the wind, it was 39.01.  We haven’t seen this much wind in quite a while. 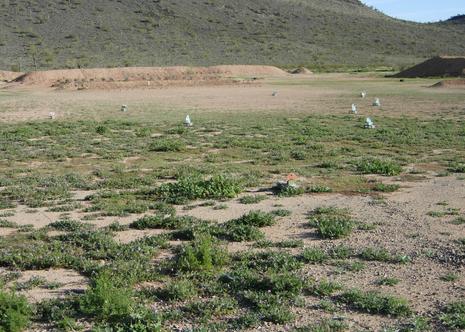