Mark with the Founder's Cup trophy 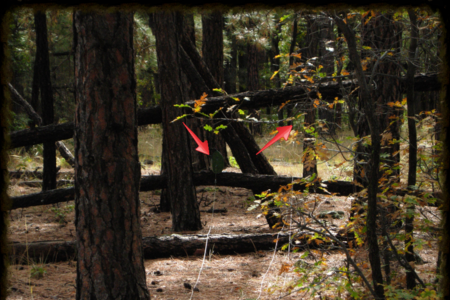 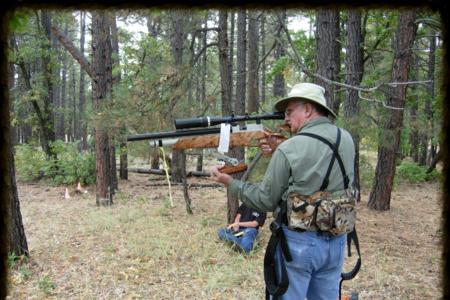 Mark taking standing shot - note how dark the sky is becoming in the background. 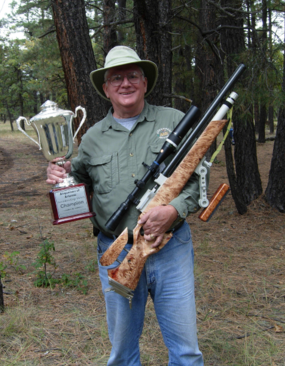 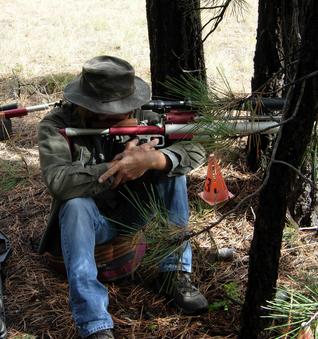 outscored his grandpa, but each had fun. 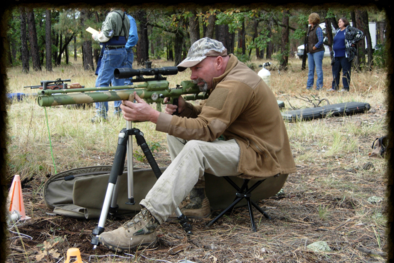 Ric was able to join us after a long hiatus.

Kaleb - This 14 year old proved to us that

As a club, I think we should all pack up and head to Las Vegas.  We have dodged the pellet each month since June regarding being caught in the rain.  This month was no different especially considering that it rained right up until the morning of the match.  The National Weather Service was calling for an 80% “chance”of thunderstorms.  I get a kick out of that terminology.  The road coming into the site was quite muddy and I believe I added about 20 pounds of sticky, Velcro-like mud mixed with pine needles on each tire.  What a mess!  I can only imagine how those that camped put up with this.  The entire area was “moist” underfoot as we traversed from lane to lane and the skies were threatening with heavy, low-hanging clouds, but we got nothing, nada, zilch in the rain department!  At times it even brightened up and the sun tried to punch through, but it made shooting conditions wonderful.  With it being so wet, the air smelled sweet with the scent of pine, and the temps were cool enough that you almost needed a sweatshirt.  Perfect conditions for shooting!

John - What a character and the life of the

party!  He is fun to be around. 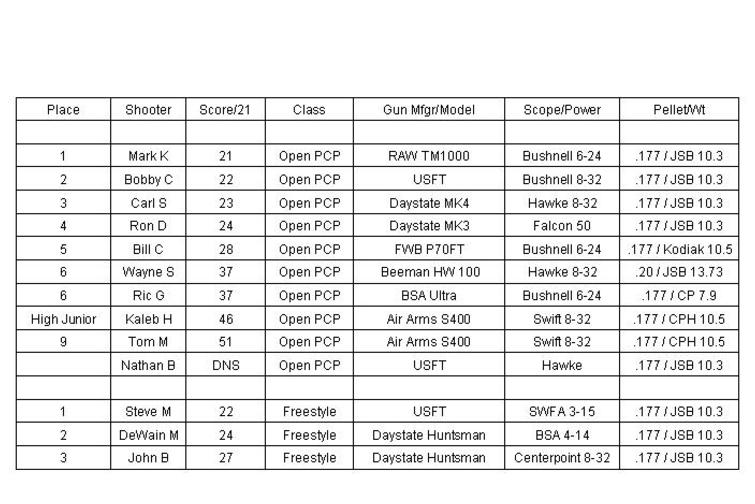 Carl (Doc) with a big smile.

He was shooting well. 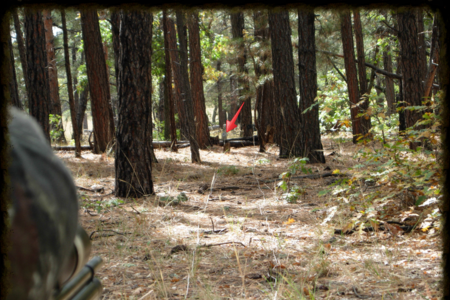 Dewain - This guy is quiet, but boy, can he shoot! 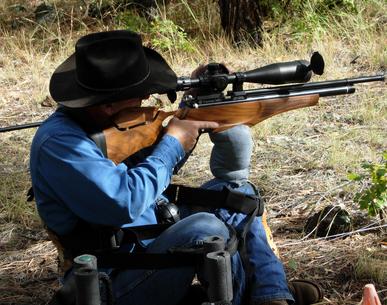 Looking at the lanes, notice how dark everything appears to be.  The targets are tough to pick out unless you look for the strings.

Wayne - He is actually smiling and not

giving me the evil eye!

Steve - Our match director and course 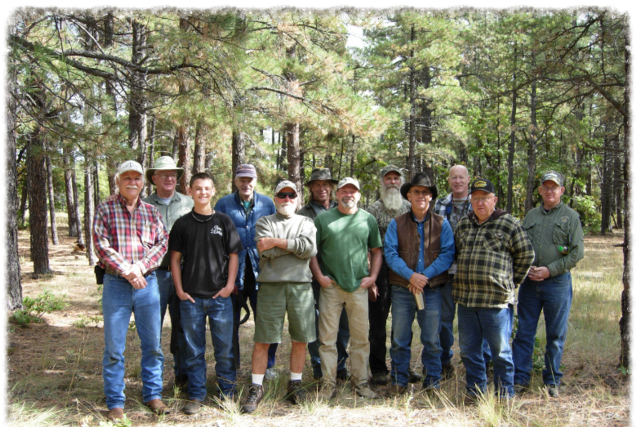 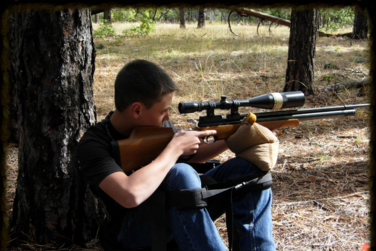 Ron - He shot a strong score! 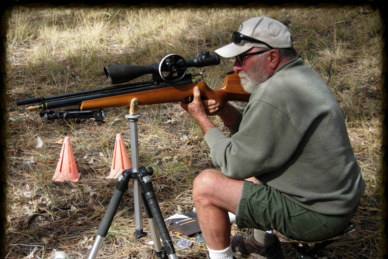 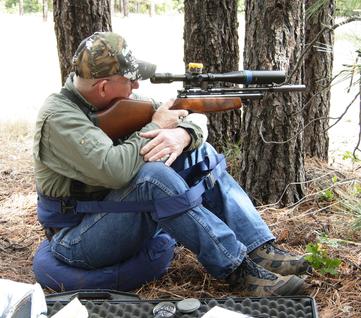 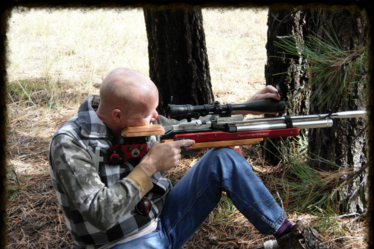 As things worked out, I found myself shooting with Tom and his grandson Kaleb.  Kaleb had a little bit of a slow start, but once he got going, we found out rather quickly that this young man can shoot!  He was having a ball and I get the feeling I know what someone will be getting for Christmas this year.  Natalie is also showing an interest so I think I can safely assume that all the overtime Tom is working is going to leave him a little light in the wallet in short order.  Look at it this way, Tom; it is money well spent.

We finished the match while keeping a close eye on the threatening skies.  My squad’s last lane included the standing shot.  For that shot it felt as if I was watching my EKG chart as the crosshairs danced across the killzone.  I let the rifle down once, calmed my breathing and heart rate as best I could and re-addressed the target.  The shot broke just as the crosshairs wobbled to the right, but the target dropped anyway.  Upon closer inspection, the pellet impacted just inside at 3:00.  Whew!  I gotta practice those standing shots a bit more.  I found out afterwards that Bobby missed this target the first time because of too much wobble and needed to take a second shot. The last two targets on this lane were the owl in the tree and a weasel (I think) a bit farther out.  I got them both and finished with a clean score.  I thought for sure that we would have a multiple shoot off, but it turned out that  everyone was separated by only a point and really tight scores.  I guess I got lucky. 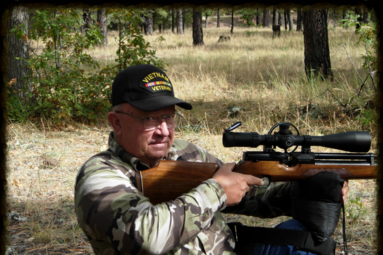 Steve, our match director, was on site on Friday and had help from Ron, John, and Wayne to set up 7 lanes with 3 targets per lane.  On one lane, he had a single forced position (standing) shot.  Steve planned on having a “Golf scored” match; a point for each “stroke” with a maximum of 4 points per target.  Low score wins.  For those who know Steve, he is quiet and unassuming, but has a devious little mind when it comes to setting targets, some of which were set to the limits of the kill zones, and all with a knowing little smile (smirk) on his face.  Such innocence.

We started with 13 shooters, but before we even started the match, Nathan was experiencing some problems with his gun (maybe his scope) and withdrew from the match.  So, with 12 shooters, we divided into 4 squads with 3 shooters each and started to make our way around the course. 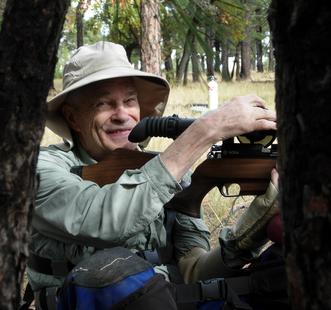 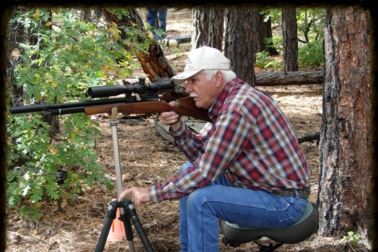 Bill - He traveled from Lake Havasu to

We did not take the targets down after the match like we usually do.  Steve and the rest of the group, that remained or were camping overnight, wanted to shoot the course again or just plink.  I learned they did just that until almost dark, then again on Sunday morning before taking it down and packing it away.  After the match we had a brief awards presentation, then socialized a bit while some of the group reconvened on the sight in range.  I was just getting ready to leave as it started to drizzle.  It was a perfectly timed ending to yet another great shoot.

Many thanks to all that helped set up, tear down, and pack away for next month’s match.  A special thanks to Steve M for taking on the duties of match director from June through October at Mormon Lake.  You did a terrific job!

Next month we will be back down in the valley (Phoenix) at Ben Avery shooting range.  The date is Saturday, November 21.  This is the Saturday before Thanksgiving.

We had three more new shooters with us this month.  Wayne, along with his wife Lynette, camped with us last month, then joined the club after they liked what they saw, then bought a gun.  Today was his first time shooting with us.  Likewise, Tom and Natalie shot and camped with us for the past couple of months and this month brought along their 14 year old grandson, Kaleb.  And last, but not least, Bill, who lives in Lake Havasu City, found us via the club website, and drove over to spend the weekend and shoot his first field target match.  Welcome to all of these folks.  We purposely put one new shooter with two other experienced Open class shooters to help show them the ropes. We had three guys shooting freestyle this month, so we squadded them together.  These three characters (Steve, John, and Dewain) seem to have way too much fun shooting with each other.