After the scores were turned in, we had a tie for second and third places.  Dale and I were to re-shoot lanes 4 and 5; the lanes with the bell targets, but this time with only one shot per target.  Mr. Rock Solid out-shot yours truly by one point to garner second place. 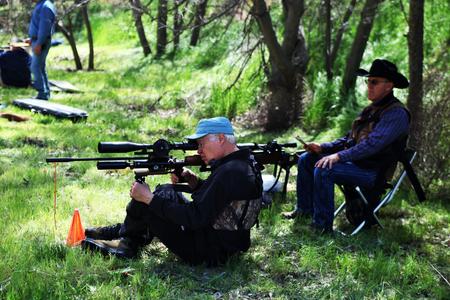 Now that the shooting was finished, we repaired to the patio and had lunch courtesy of Sandy and Laura.  Laura did most of the cooking and had two large crockpots filled with shredded beef and pork.  After giving a short introduction on how to build traditional Mexican taco’s we jockeyed for position in line and ate until it came out our ears.  Boy, was that good!  Thank you Laura and Sandy.

I was picked to shoot with Sandy today.  I have shot with Sandy before and although she has a sweet, innocent smile, she will rip you apart with her skill behind a rifle.  She did that to me today…..again!  With the wind blowing, the tree branches, leaves, and ground cover swaying back and forth in front the target, she proceeded to thread the needle and drill the targets, one after the other.  Don’t ask me how she did it, I have no idea.  When it was my turn to shoot, all I saw was crap blowing across my scope.  This is, after all, her home turf, so she knows the conditions very well.  If you get paired up with her during a match, she will take you to school and leave you whimpering afterwards.  Bobby must have taught her well.  Needless to say, she did win the match….again!

I would like to comment on how others shot, but I have no idea.  I knew they were nearby, but could not see them for the vegetation.  Fortunately Debbie and Karin both had cameras, so I will let the pictures tell that story.

The beef and pork, on skewers, ready to go into the oven.

This is a sampling of Joe's handiwork taken from a few years ago.  He found all of the "craft materials" in the fields behind his home. 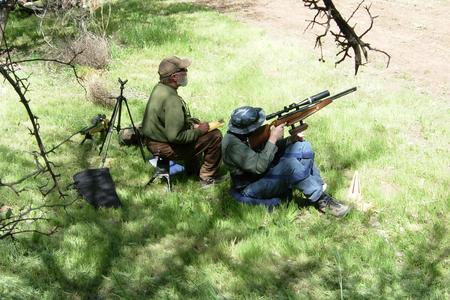 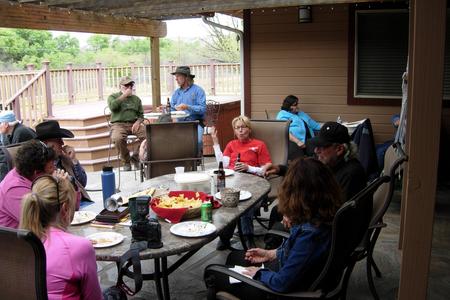 Next month’s match is scheduled to be back at Ben Avery range in Phoenix, but that may change and I will keep the troops posted as next months match date gets closer.

As with all endeavors such as this, there are a number of folks that need to be recognized;

Bobby and Sandy; thank you for graciously opening up your home to our motley crew.

Airguns of Arizona; thank you once again for contributing by paying for all the shooters match fees.  Your desire to promote the field target game is both  heartfelt and appreciated.

Bobby, Darrell, Steve, and Paul; thank you for setting up a most enjoyable and challenging course of fire.  Shooting it was fun!

Sandy and Laura; thank you very much for putting together such a wonderful lunch.  Deeeeeeeee-licious!

Debbie and Karin; thank you for taking all the pictures to document the fun that we all enjoyed.

Mark posing for the photographer

Note the wind indicator whipping around. 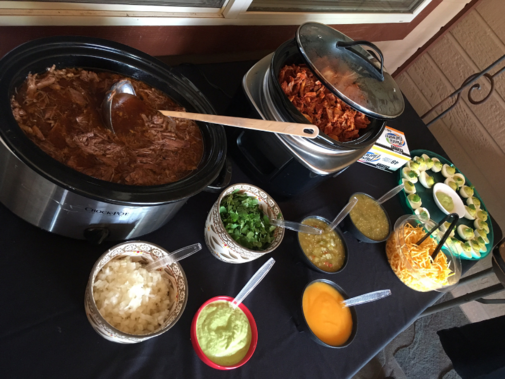 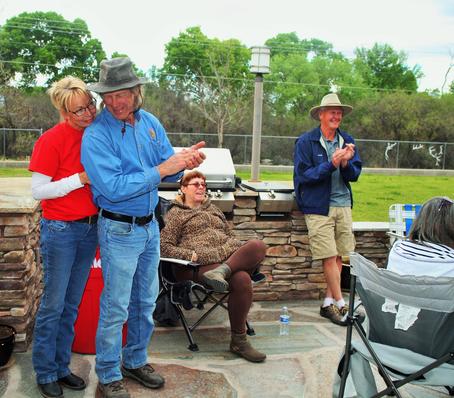 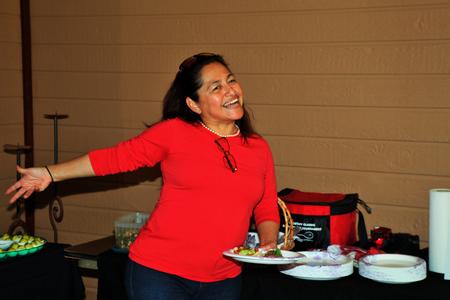 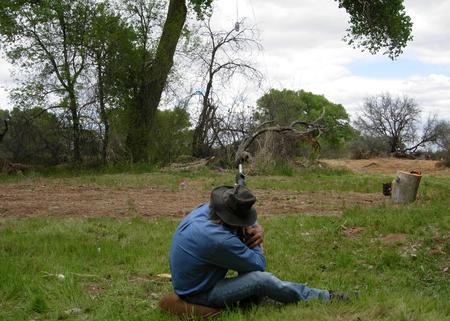 Joe’s birthday would have been this April and Bobby & Sandy wanted to remember his contributions by having a fun shoot at their home in his memory.  Bobby, Darrell, Steve, Paul, and Laura (Darrell’s wife) gathered this past week to set up the course, while Laura did most of the work in “decorating” the targets.  To say they did a masterful job is an understatement.  Bobby “claims” they set this up to be easier than some of his courses (to which I say “HA!”), and although we could see all of the targets, finding a position to be able to shoot them would be a challenge. 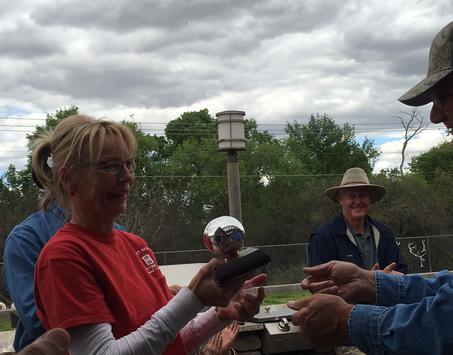 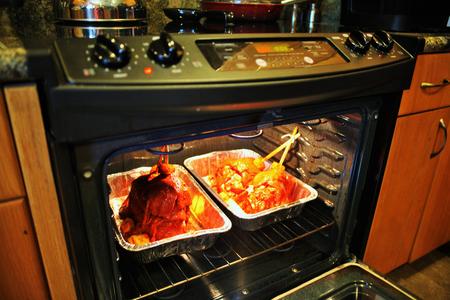 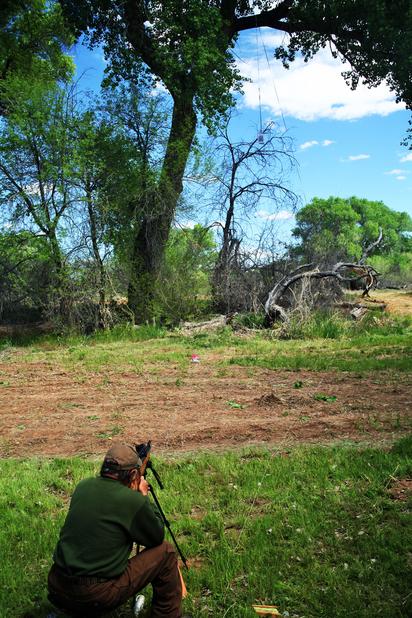 Sandy hiding behind Bobby as she is announced as Match Winner

Views of the sight in line

Bobby in position to shoot the hanging bell target; a miserably tough shot with the wind blowing the target around.

Laura instructing how to build the perfect Mexican taco 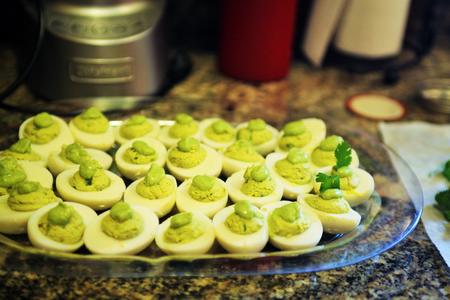 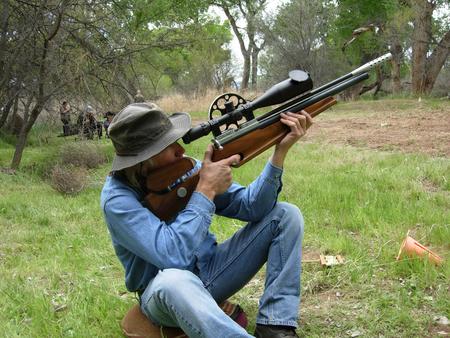 Dale and Rick just lounging around in the lush grass with nothing better to do while waiting their turn to shoot. 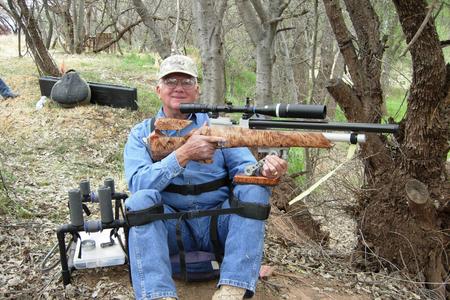 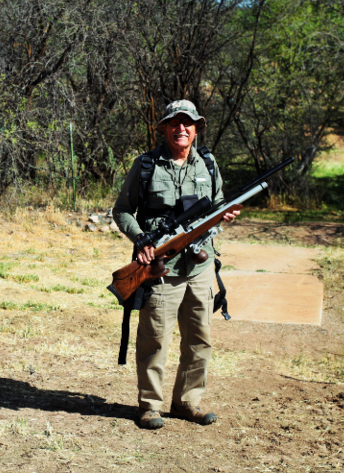 The crew set up 10 lanes with the firing line in the shade of the trees, with two decorated steel targets per lane.  On two of these lanes, Bobby also had a bell target positioned; one in the open and the other hanging about 25 feet up in the air and suspended from a tree branch.  Yes, it was tethered, but remember the comment about the wind?

Now that the stage has been set in describing the terrain, the 44 shot course, the conditions, and the weather, 22 like-minded disciples gathered early on Saturday morning, with 14 shooters actually participating in the safari.

Deviled eggs topped with a touch of habanero guacamole 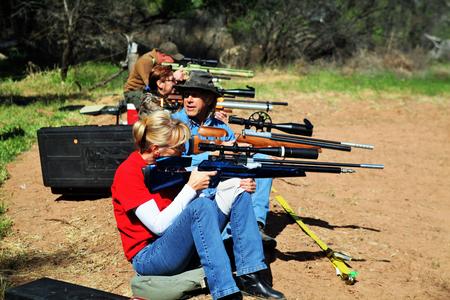 We have no idea what the Troyer factor was.  Part of the course was in the open and the other part of the course was in one big tangled mess of downed trees, fallen cottonwood branches, and various other vegetation, saplings, and underbrush. It was perfect!  At various times before and after the match, a herd of javelina was spotted traversing the grounds, and an eagle was later seen down by the river.  Wildlife abounds in this area.

The day started out with temps in the upper 50’s that would warm to the low 70’s and with sunshine punctuated with numerous patchy, drifting clouds.  These were being pushed around by 10 to 12 mph winds coming at you from the north and shifting about 30 degrees from either side.  When the wind was gusting, which was frequently, it was estimated to be close to 25 mph.  Thankfully this was not Friday.  The winds in Phoenix were close to 40 mph and 70 mph in other parts of the state.  Bobby said the NWS stated they were in the mid 50 mph in Camp Verde area.  Nice! 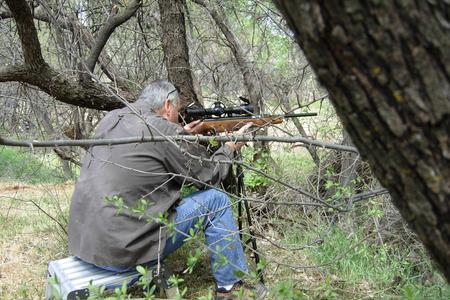 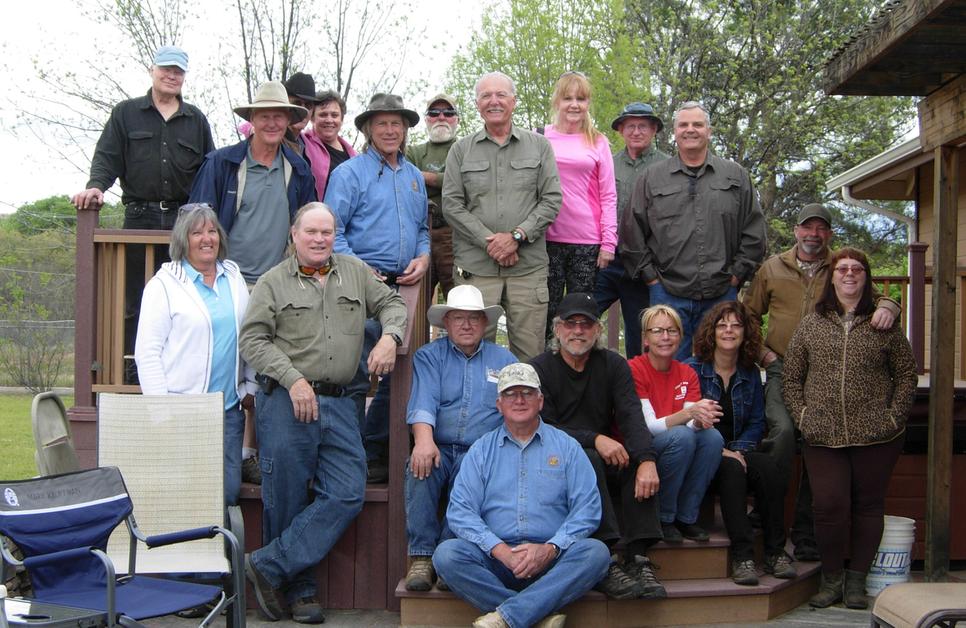 Sandy getting ready to clean my clock.

She is deadly accurate behind the trigger. 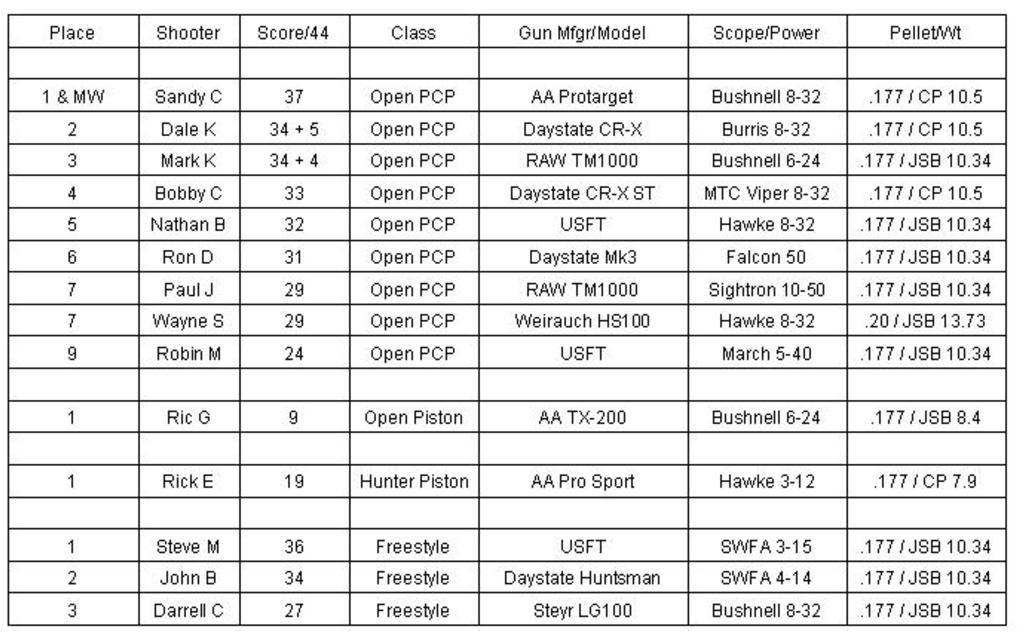 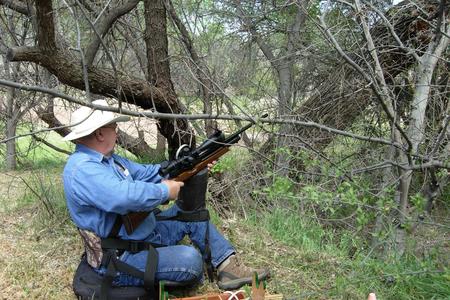 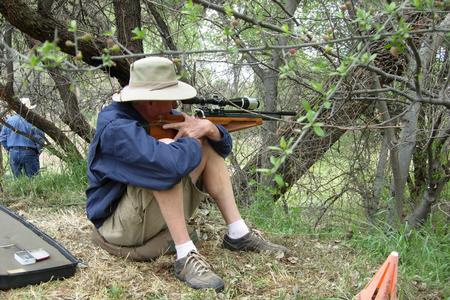 Paul posing so Karin (his wife) can take his picture 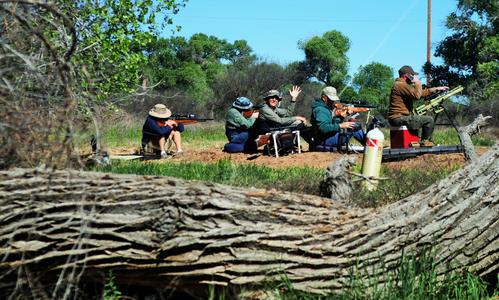 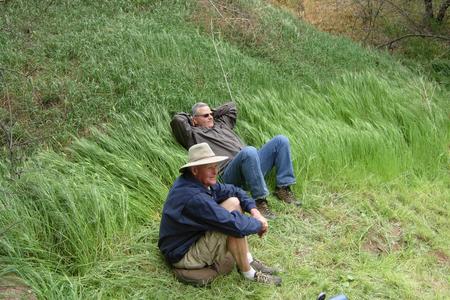 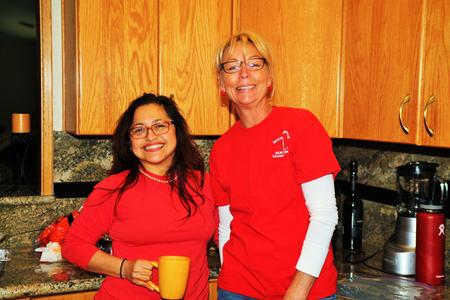 We handed out awards and discussed some club business, but mainly just socialized for a while until some folks had to leave.  The rest of us gradually meandered over to where Bobby had some short range targets set up and proceeded to plink with the 10 meter guns that some of us brought along.  Guns were being swapped back and forth with everyone getting to try something different, whether rifle or pistol.  Lots of fun.  With the sun starting to set, we reluctantly had to say goodbye, packed up our toys, and head for home.  It was an exhilarating, tiring, worthwhile, and very enjoyable day spent with a great group of friends and new friends.  The best part is that we get to do it each and every month! 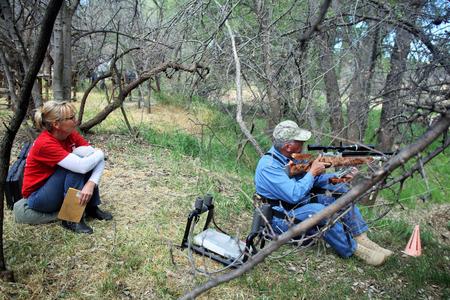 Laura and Sandy prepping first thing in the morning 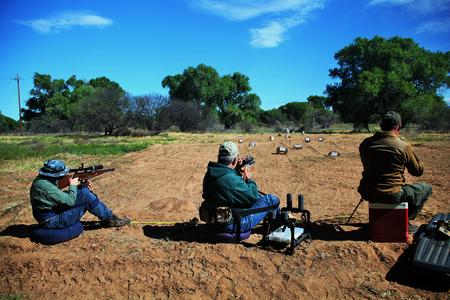 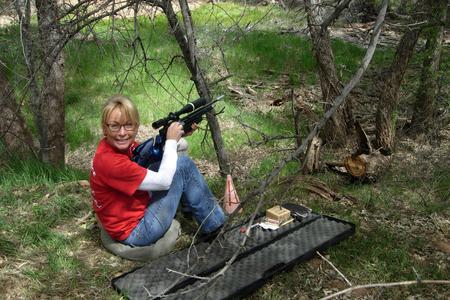 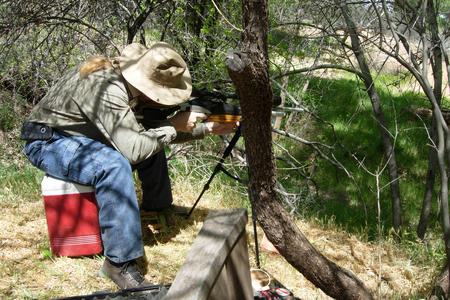 This past August, the club lost a friend.  Joe Gramant was not a club member, but was a neighbor of Bobby & Sandy, and supported the clubs efforts when we attended events at their home.  Joe helped Bobby set up the courses and also in “decorating” the targets.  He used real feathers, real fur, and real porcupine quills that were then glued to the target faces.  This became more of a safari than it did a field target shoot. 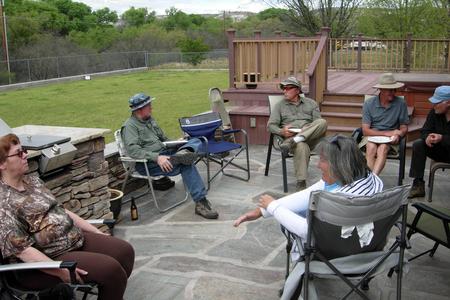 John in position to shoot the close ground target (little red dot).  The next target is mounted on the right side of the forked tree that has fallen down, and the hanging bell target is visible up in the air.  it is suspended by rope and is tethered to the ground to attempt to keep it from swinging too much. 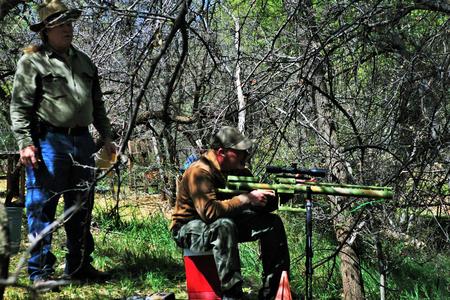