With a quick tallying of the scores, we found that we had a tie for second place in Freestyle class.  That tie was broken by counting up the number of “clean” lanes being fired.  We then handed out awards in six classes, along with Hi Lady and Hi Junior for today’s match.  We took a group photo and then everyone parted ways to safely make their way home.  Several of us retired to the Tennessee Grill for lunch afterward to top off a most enjoyable, if not wind-blown day.  Life is good! 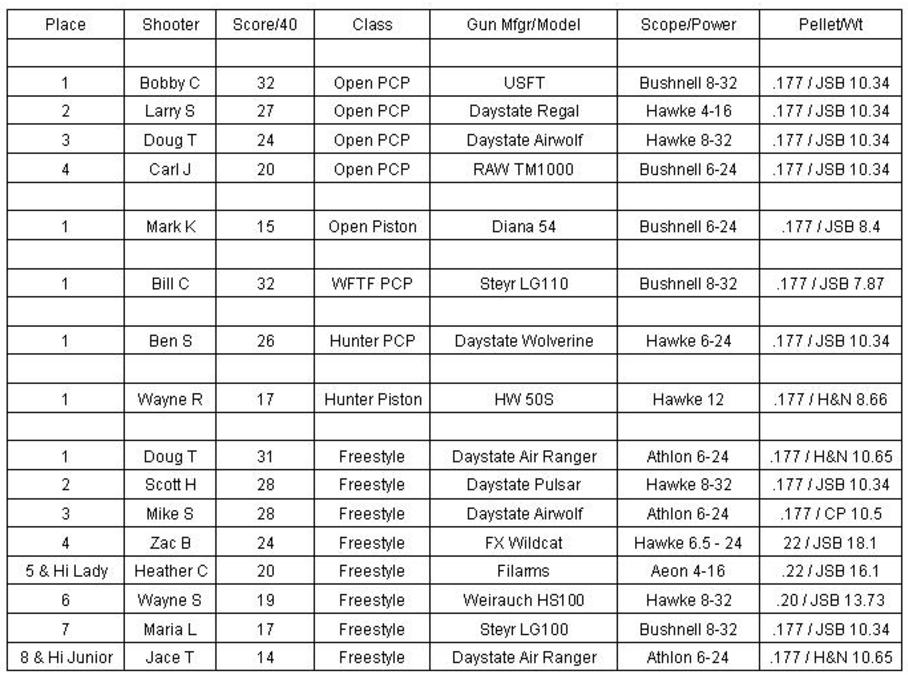 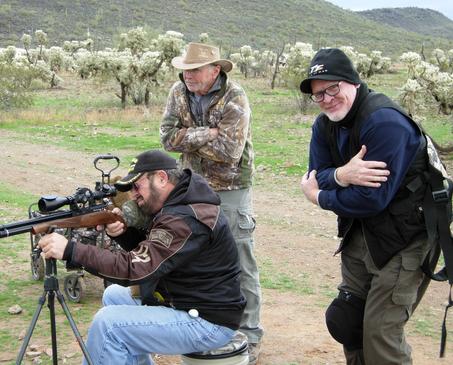 Bobby and his niece, Heather

Notice how green everything is getting due to the recent rains. 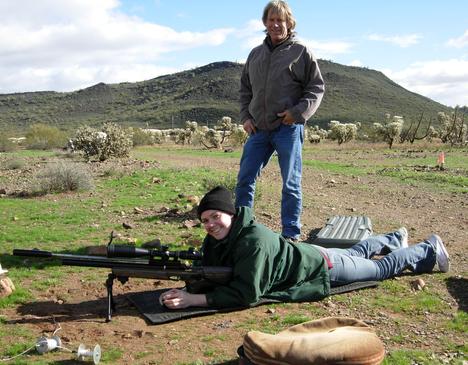 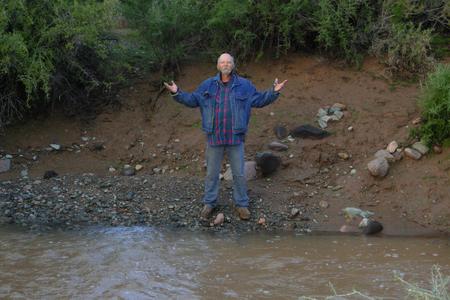 Sixteen of us rolled the dice and took the chance to shoot, even though the weather report called for a 100% probability of rain on Friday night and 50% on Saturday.  Everyone was bundled up and had rain gear, just in case.  I have to commend and thank everyone who did attend today’s match.  It could have been cold, wet, and windy, but was only cold and windy, and all of you can now be added to the roster of hard core airgunners.  We even had five shooters, other than Carl, that had not shot with us before.  Bobby, who has family visiting him, brought along two of his nieces.  Zac, who is recently new to the sport, came out to shoot, and Mike (the old man) brought along Doug and Doug’s young son Jace, to shoot with us.  All had a great time and it certainly sounded that way from the laughter and the excited hoots ‘n hollers when targets were knocked over. 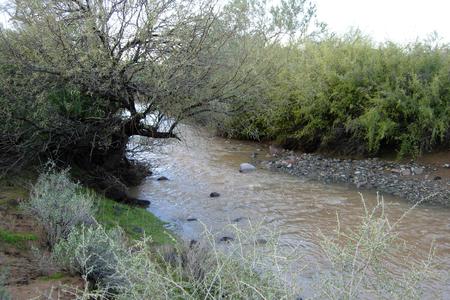 Carl, Don, and I set up the course on Friday morning and had 10 lanes with two targets per lane.  Six lanes were facing the west and four lanes were facing east.  With the anticipated weather, the course was set with nothing under a ¾” killzone, but with the wind, the Troyer factor was 37!  Not an easy course and definitely NOT with that amount of wind.  After the match, EVERYONE helped pull targets.  Thanks to all for pitching in to help with that. 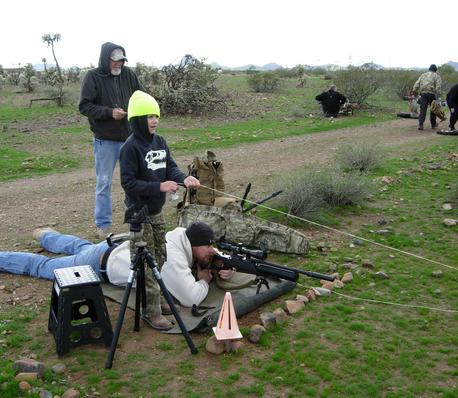 This is Don on the other side of Dead Man's wash.  This wash is normally dry, but with all the rains we have had in the past few weeks, it is running at a pretty good clip and is now about 20 feet wide and would be about half way up his chest should he try to cross it.  On Friday, when we were setting up for the match, he was able to get across by going from rock to rock.  With as much rain that fell on Friday night, that is now not possible. 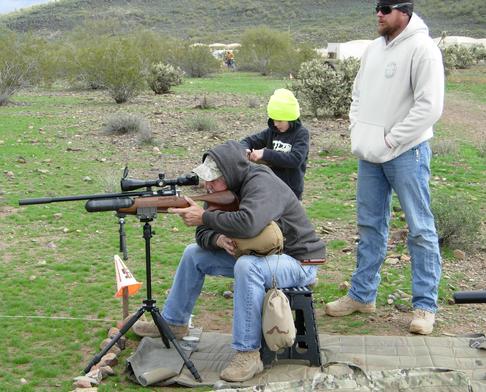 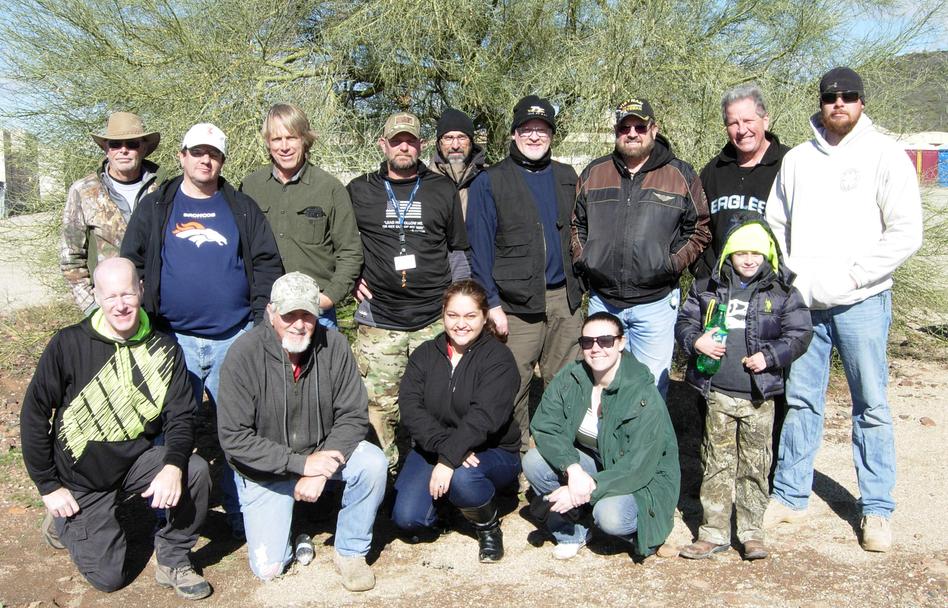 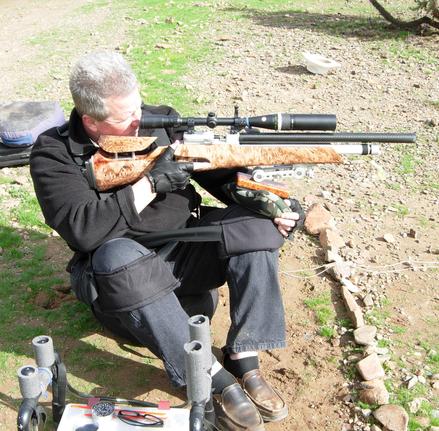 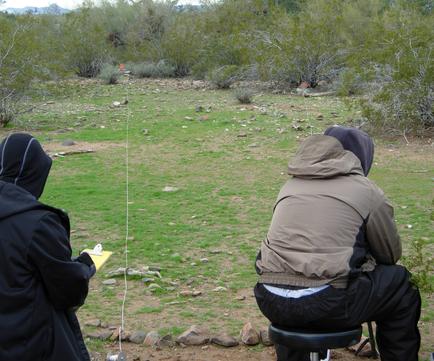 Carl from PA shooting my TM1000.  I have a better picture of him but seemed to have missplaced it somewhere.

Speaking of water, we could not use the target locations on the other side of the usually dry Dead Man’s wash because it was now a fast moving stream that was 20 feet wide and 3 to 4 feet deep at places.  Don, who is from N.M. and one of the guys that helped us set up on Friday, made camp on BLM land, outside of the shooting range property, but on the other side of the wash, and could not get across to join us.  I found a message on my answering machine when I got home later in the day, telling me all of this.  He stated that he will see us next month.

Today, I got to shoot with Thumper.  For you guys that frequent the Network 54 yellow and FT forums, Thumper is also Carl, a buddy of mine from my old stomping grounds in southeastern PA.  I was shooting my 12 fpe piston gun today because Carl was using my PCP gun, and loving every minute of it.  After several years of correspondence, he was finally able to arrange his work travel schedule to include a day to shoot with us, and I don’t think it will be his last, either.  He had a good time!

Larry shooting with Wayne and Doug hamming it up by acting as if it is cold.

For the first match of 2017, the desert was GREEN!  It has been raining off and on for the past several weeks and this otherwise sorta brown background was taking on an emerald hue.  We got lucky because the storms that passed through on Friday, after the course was set up, and Friday night dumped about an inch of rain on us and then apparently rained itself out.  Saturday morning displayed heavily clouded skies that looked more threatening than they actually were.

It was definitely colder, with temps in the mid 40’s warming to the low 50’s toward the end of the match, but the operable term for the day was WIND.  It did not really become apparent until the shooter’s meeting when the clipboards, holding the scorecards, were fiercely being blown off the table.  When the previously mentioned clouds yielded to bring sunshine and the skies turned a lustrous blue within minutes, you knew it was windy.  The NWS (weather history link) showed that the wind velocity spiked to between 15 and 25 mph during our shooting times, with gusts as high as 35 mph.  So, what did we do?  We went out and shot!  Mother Nature was giving us a lesson in how to shoot in the wind, so we paid attention and made the best of it.  Was it humbling?  Oh, you betcha!  We now know what sailboats feel like when being pushed around on the water.

Jace is shown here scoring for the old man (Mike) while dad looks on.  Unfortunately, I did not get a picture of him shooting as he must have been shooting at the exact same time as i was. 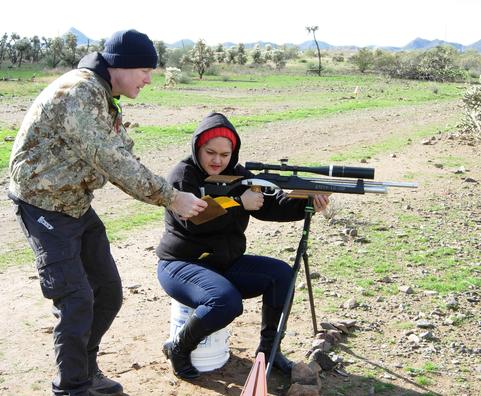 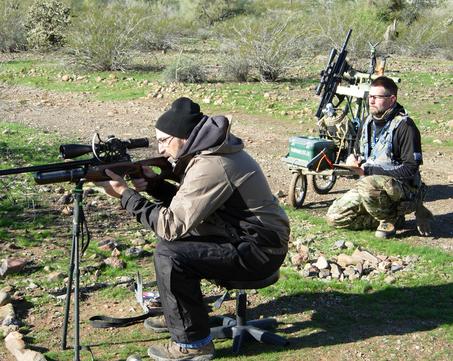 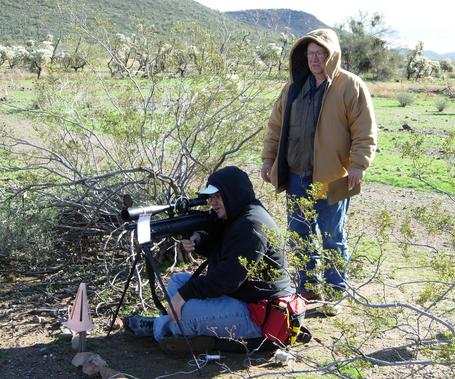 Here is Jace helping dad (Doug) by holding the string nice and tight.  The kid is learning the tricks of the trade at an early age....LOL