A portion of the parking area.  Those little ridges are built up pine needles acting as a dam.  The little white spurts are hail stones streaking down and splashing.

We were about 2/3 of the way through the match when the rumbling/grumbling of thunder was heard with a few drips here and there.  Some had rain gear with them, while others walked the short distance to the cars for theirs.  I had just put my rain cover over my rifle and was opening my umbrella as the sky opened up with a light but steady shower.  It took but moments for the crescendo to build in intensity as the rain really started to come down.  Everyone gathered their gear and headed for shelter to wait for the storm to pass.  It usually takes about 20 minutes to pass through and then its done.  This storm lasted about 30 to 35 minutes, then the sky cleared, and the sun came back out.  So did we.  A few had already decided they had had enough and left.  Those of us that remained grabbed our gear and headed back out onto the course to continue the match.

We were only shooting for another 10 to 15 minutes and we hear the thunder and within a few minutes it was raining again.  This one lasted about 15 minutes and cleared up.  OK, no problem, we know the drill, so we were back out on the course again after being chased off.  This would continue for a few more cycles until we finished, albeit a bit soggy.  The last time it rained for over an hour and we had hail stones the size of quarters.  Some thunder throughout, but no lightning that I observed.

By this time very few shooters were left, the score cards resembled droopy dish rags, and those with dry clothes had gotten wet again after changing the first time.  We gathered and organized what we could.  The targets were left out as those camping usually shoot through the course later in the day or on Sunday before taking them in and packing up to head home.  It was close to 5:00 by the time that I left and then experienced several more storm cells on the drive home to Phoenix.

Here are the scores and stats.  Those who did not finish are listed with their score posted and compared with number of shots fired. 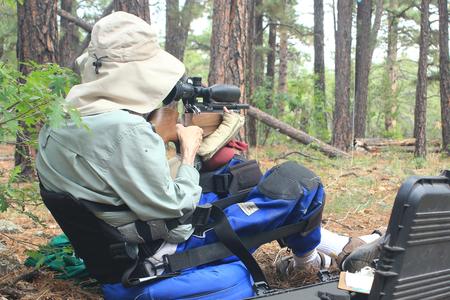 View taken along the sight in line.  Notice how nice and bright it is?  See the dappled sunlight filtering through the trees on the blanket of pine needles on the ground?  Remember this; you will see this later on much differently.

Part of the course layout - One weasel (1" KZ) hanging from a tree, while the other weasel (3/4" KZ) sits atop a propped up tree branch. 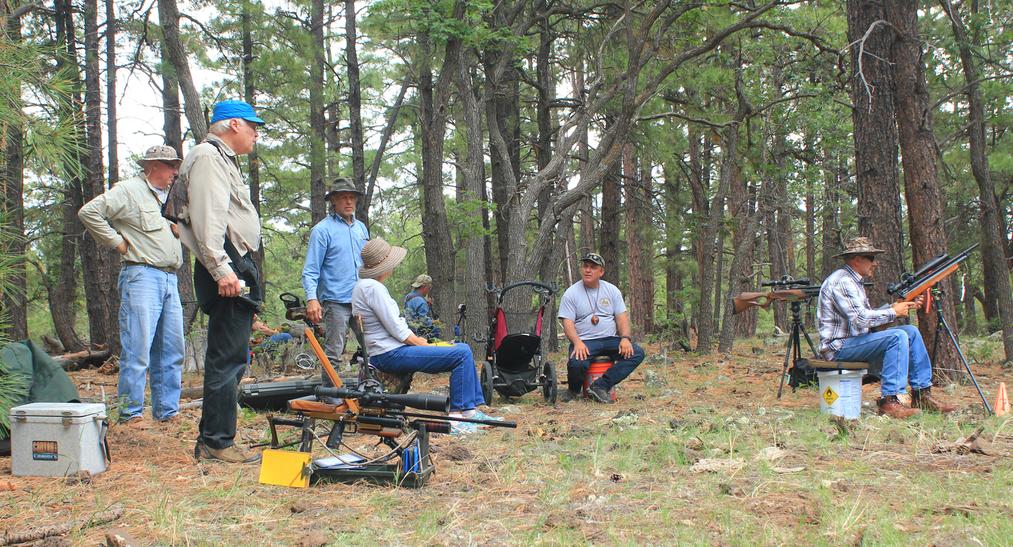 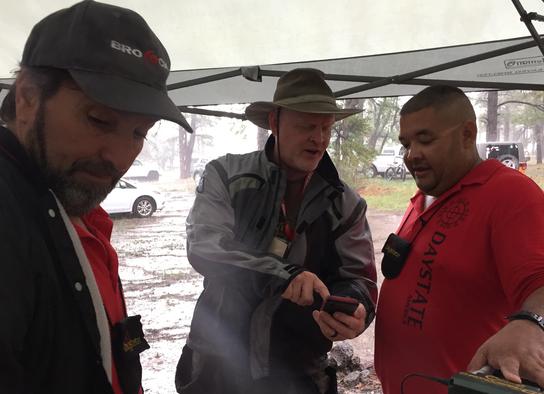 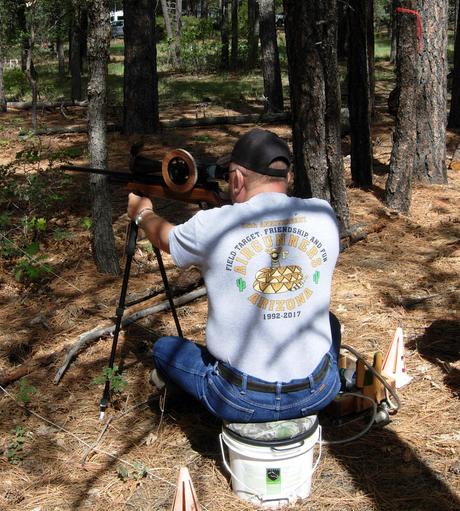 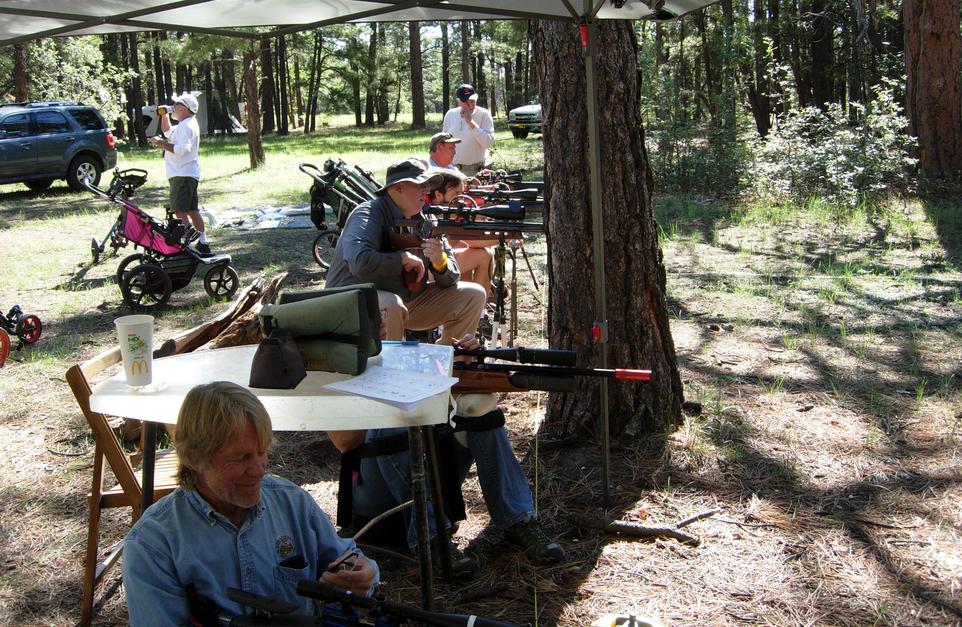 Robin getting ready to shoot, with Richard scoring.  Samson wants to help 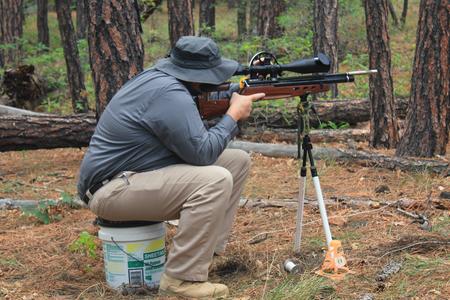 Soggy.  That is all that I can say about the results of this match.  That was the result of what transpired, but let me start at the beginning and paint this picture accurately.

Steve, Don, Wayne, and Bobby set up 12 lanes this month in a 3-sided box shape; Five lanes facing west in a reasonably straight line going down through the pines, two lanes across the bottom of the “box” facing south, and five more lanes up the east side of the box.  When you finished with lane #12, it was a short 20-yard walk to get back over to lane #1.  Target positions were the usual; on logs, up on stumps, hanging from trees, strapped to trees, out in the open, etc.  The guys did a good job of course layout with easy access from the parking/camping area.

Saturday morning was beautiful!  Bright blues sky with scattered puffy clouds and just cool enough with a slight breeze.  The national weather service claimed only a “slight” chance of showers.  Looked to be a perfect day.

With 27 shooters in attendance and the safety meeting/lane assignments taken care of, we were ready to go.  With the course set up in the pines, we had dappled sunshine and shade.  The breeze was tricky at times as is swirled through the brush and you could watch the mirage boiling and changing direction behind the targets that were set in the open clearings.  Wind indicators on the rifle barrels going one direction at the firing line, mirage doing something different down by the targets.  Fun stuff.

Mary Anne, our Treasurer taking registration and being helped by one of her twins, Emma 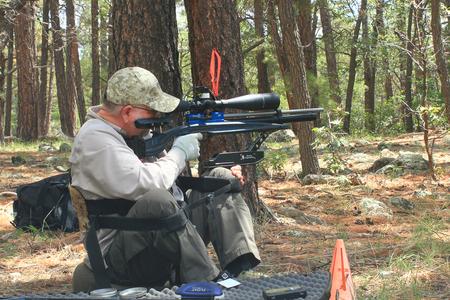 Here are the two tiger targets, both with 1 1/2" KZ sitting just inside hte tree line.  Photo is enlarged to bring them in far enough to be seen.

Mark, slightly soggy, out checking to make sure everyone is OK 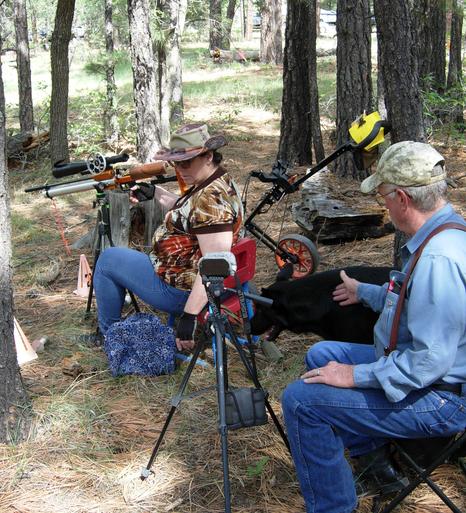 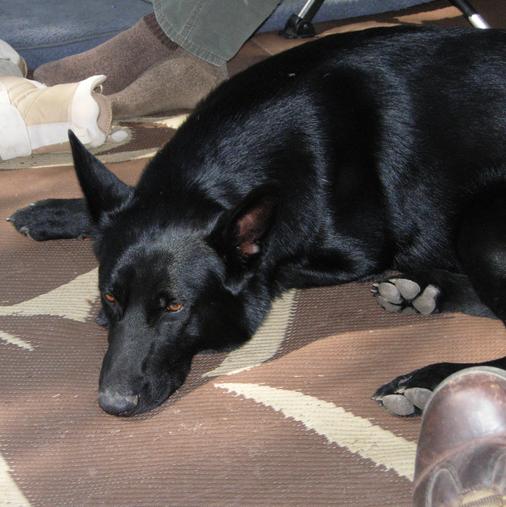 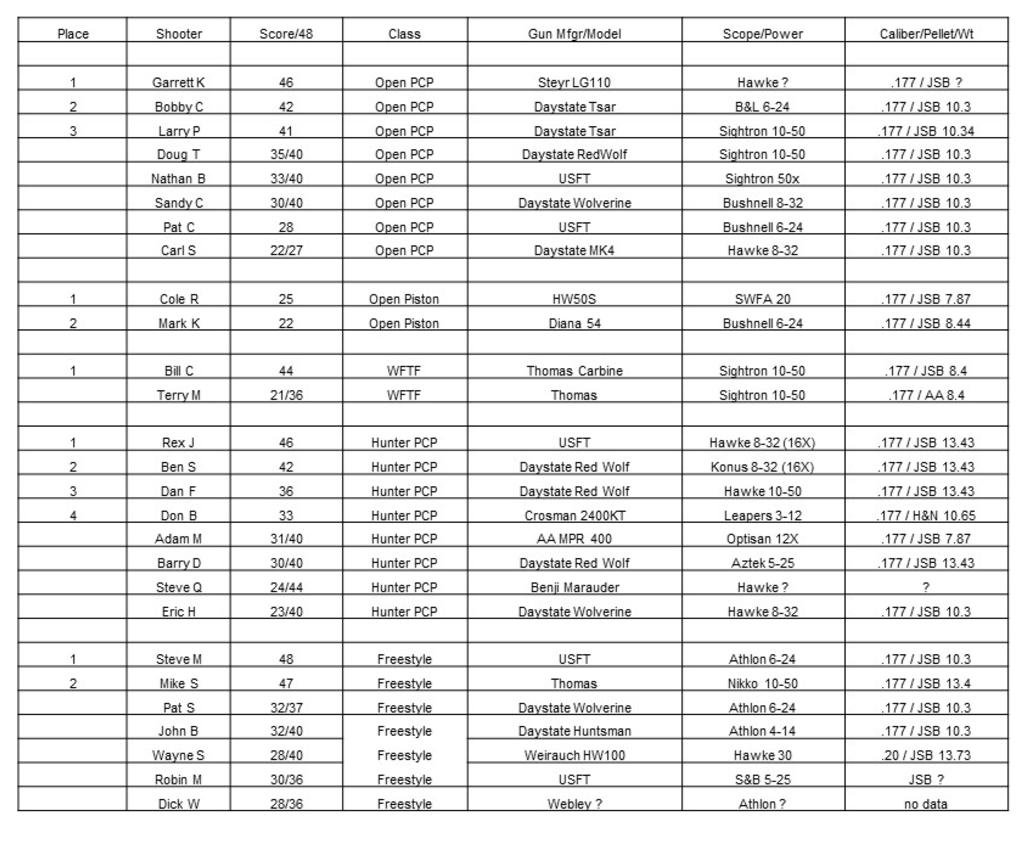 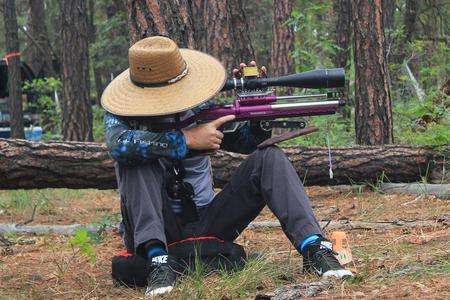 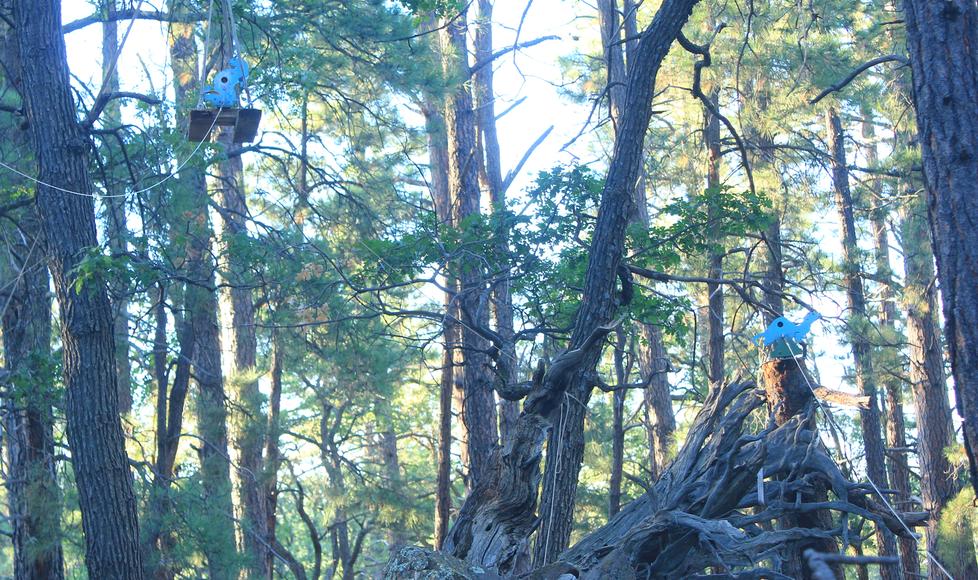 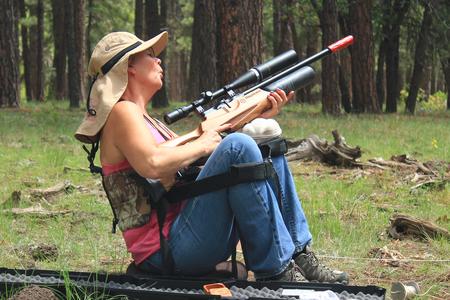 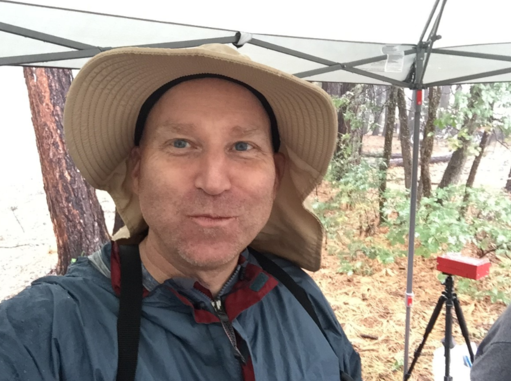 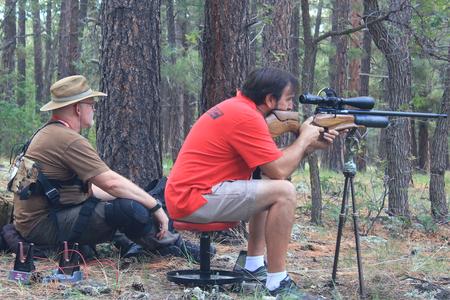 Garrett taking a gratuitous selfie.  He took the rain pics so he is entitled

Ben, Doug, and Dan taking refuge under the canopy 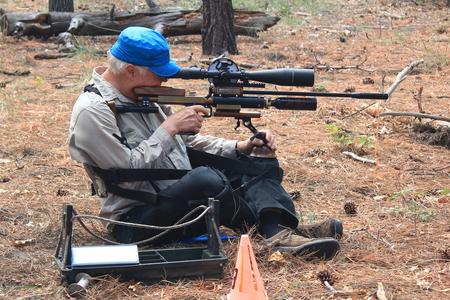 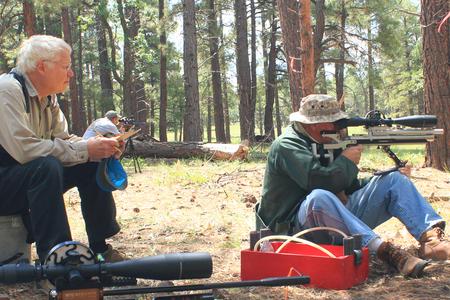 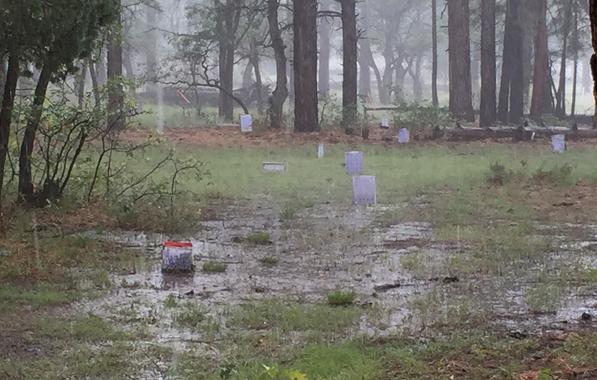 Wayne S - Still early in the match while the sun is shining. 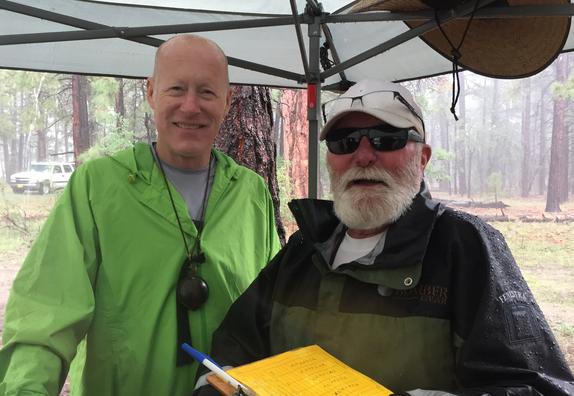 Samson, Steve's dog taking a break to mellow out.

We want to thank the guys who set up the course; Steve, Don, Wayne and Bobby.  Always interesting layouts.  We also want to convey our appreciation to those stuck it out to finish the match is somewhat trying conditions.  We have had rain before, but I don’t think we have had this many storm cells, one right after another with short periods of respite in between.  Mother Nature is fickle, that is for sure.

Thanks also to Don and Garrett for supplying photos for this report.

Soaked (but drying out) Secretary, Airgunners of Arizona 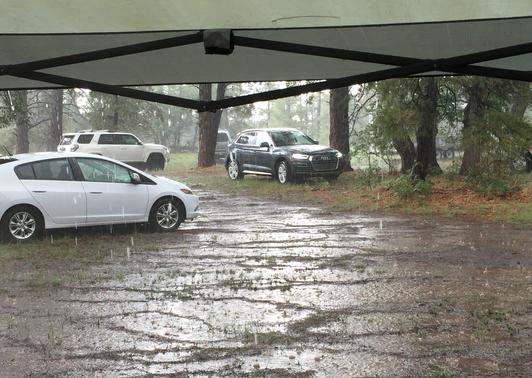 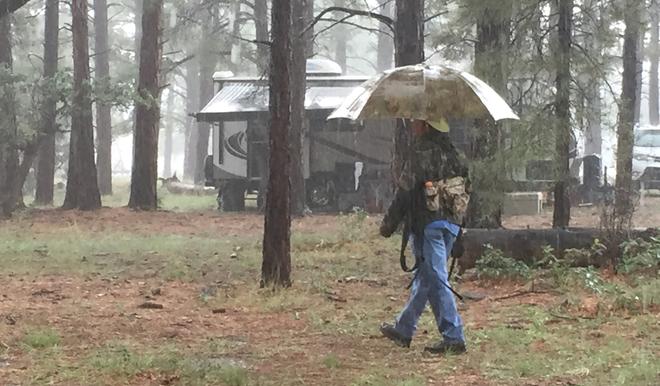 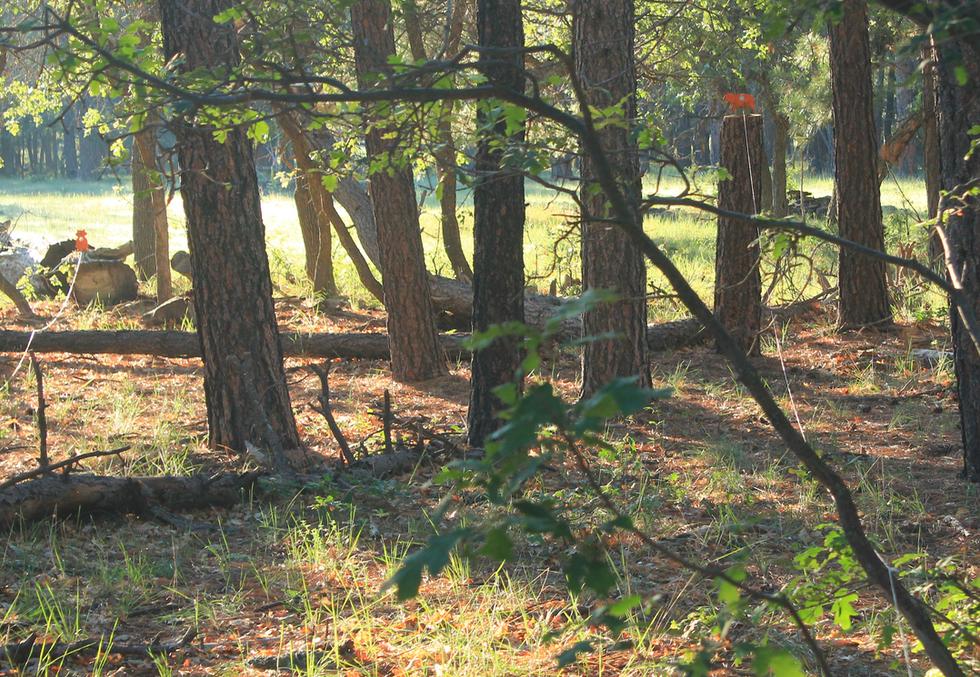 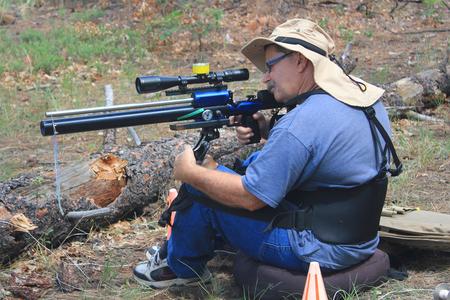 Here is a picture of the sight in range, now retaining water nicely. 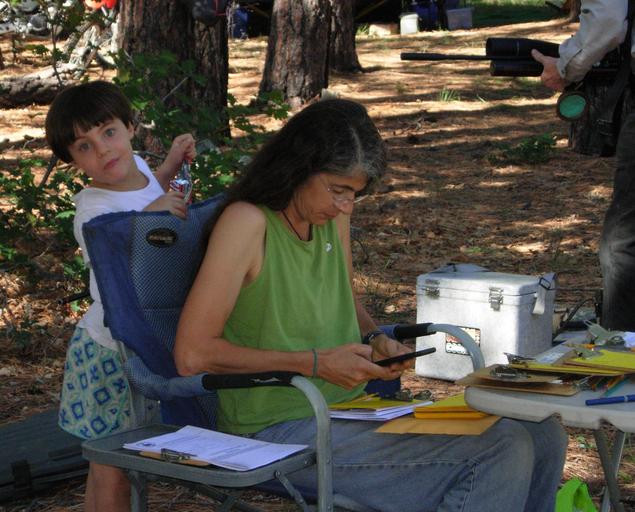